I rescued a pair of Veileds today. I was doing my normal scan of Craigslist and saw an ad for 2 Veileds needing a good home as the owner could no longer care for them-price $25. I emailed her and said I would not pay but could give them a good home. She said the male had some skin issues and the female had laid eggs 2 weeks ago. Well, I went and got them tonight. She was obviously very much in love with them and had a hard time saying goodbye, but I would have to say not very informed on chams. She also had, free-ranging along with the chams mind you, 2 very large iguanas and 3 bearded dragons, all hanging out in the same space. She said that one of the bearded dragons had eaten the bottom 2 inches off the male Veileds tail some time ago. They are both quite dehydrated, but no bone issues that I can see. The male has a large lump near his hip, which I am guessing is an old healed injury, and he does have a severe skin issue-I am guessing fungal but possibly not contagious since male and female were housed in the same cage and the female does not have it. It certainly look contagious to me though, as he has about 7 of these round lesions on different parts of his body. Off to the Vet he goes tomorrow, and is well quarantined outside on the lanai. Here is a picture of him with previous owner. If anyone knows what this could be please let me know. 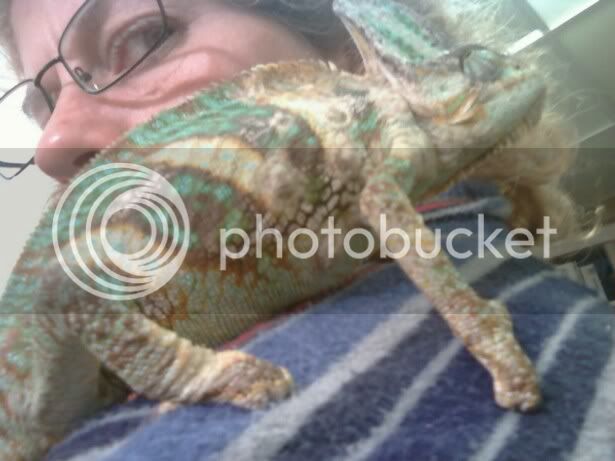 Wow! That male looks rough! Good thing they are in good hands now. I'm sure they'll make a good recovery.

Let us know how the vet visit go's! I would love to see what he/she thinks it is?! I would guess some sorta fungal infection..But I'm no expert on that subject..

Hey Julirs, from the pictures it does look like a fungal infection. If I were you I would not keep them too close to the rest of your reptiles. A skin culture will tell you what is going on. Good luck anyway...

Eltortu said:
Hey Julirs, from the pictures it does look like a fungal infection. If I were you I would not keep them too close to the rest of your reptiles. A skin culture will tell you what is going on. Good luck anyway...
Click to expand...

Thanks-we should know tomorrow after the Vet. He is outside far away from the rest of my crew-they are all in the house.

Julirs said:
Thanks-we should know tomorrow after the Vet. He is outside far away from the rest of my crew-they are all in the house.
Click to expand...

I recieved a panther cham 3 months old from one of the most reputable breeders out there. He came with a small defect on the top of his casque. It was actually where a few of the scales on the top of the fat pads didn't meet up. Around 6 months of age this spot turned into a bumb much like what those look like. I took him to one vet that tested it to see if it was fungal and sent me home with some baytril, incase it wasn't. Fungal results were negative so we went with a 2 week course of bayrtil. No luck is getting it to stop. Now it was spreading to other parts of his body. I took him to get an opinion from another vet. BTW there are two former exotic vets for the buffalo zoo. The second vet, my current one, suggest removing the largest on from his side to have send for analysis. The largest mass was removed along with 2-3 other that were on his limbs. The ones on the limbs kind of just pulled out like a plug apparently.

The large mass was sent for testing. After a long weeks wait the results were in, well kind of. The mass was found to have inclusions characteristic of viral activity. They were unable to pin it down 100% but the best working theory from the lab and the vet was a sort of reptile herpes virus. I wasn't really sure on that so I had another of the masses tested for fungal infection, again negative. Which basically left me with a bunch of bills and no real cure to the problem. He continued to develop those masses for the rest of life which wasn't all that long. He only lived to 2 - 2 1/2 years. Some of the masses would shoot out like a hardened pimple, he would rub these off when he could. It would leave a giant hole where it was. I packed these with silvadene to prevent any further issues.

None of the other animals got it. Not even the female that I had tried to mate him to before I knew what it was 100%. He never did the deed though, she is still mass free to this day.

If was indeed a form of virus, I have to question how he got it. Was it passed from the Mom to the baby? My male came from the second and final clutch of a very promising stud. I'm not sure what came of him, but given how many clutches they offer out of other males... I do tend to think this is the case as some of the later pictures of him show the bumps and wounds from where the masses were removed.

Please keep us updated on what happens with you situation. And anything you are able to figure out about its origins. I also wanted to wish you good luck with Leon tomorrow.
K

Your picture isn't very clear, but if these are what I think they are they have shown up on reptiles as viral (pox) and bacterial and even fungal and may even have a combination of the 3 things in them. They are usually fatal. I don't know if they can pass from one to the other without contact...I don't think its been proven yet...but I would be careful anyhow.

There is also another fungal infection that presents as blisters (they look similar to these...but not quite) and that also is a bad fungus since it can go into the organs. Its Nannizziopsis vriesii.

Wow, not good news in either of these cases. He is about 2 1/2 according to the former owner. She also said he has been this way for the past 2 months, and was always housed with the female who does not have it, nor did her other reptiles have it-but not knowing what it is we don't really know how long it can take to show up. Either way I have him qurantined and i only handled him when I picked him up and then came home and scrubbed my hands and then used a hospital grade hand sanitizer. If the Vet decides that this is something that we cannot treat or if treating him will diminish the quality of his life then I will have him euthanized.

OK-Been doing some reading on CANV-this is scary stuff. Most articles are showing this has been found on Veileds, Bearded Dragons, and Green Iguanas-which leads me to beleve that IF this is what this is, this lady proabably will have. a potential huge issue with all of her animals. I will be honest-I will not treat this animal and will choose to have him humanely euthanized as treatment often will kill them. I cannot risk this spreading through my collection, and honestly if she had told me if it was skin lesions prior to my arrival I would have steered clear. Oh man, what might I have gotten myself into?
K

There's no guarantee that its either of these...and I hope its not.
You'll have to see what the tests say.
Good luck!

I'm not sure....its been a long time since I've had to have it tested.
This might help the vet with the Nannizziopsis (aka CANV)...
http://www.mycobank.org/MycoTaxo.aspx?Link=T&Rec=104542

Here's another thread with some marks that might be similar...
https://www.chameleonforums.com/chameleon-skin-bumps-look-like-barnicles-9227/

I just found this thread also-but it seems like people never usually get to the root cause of these issues. AND, most of this is happening right here locally in FL
https://www.chameleonforums.com/skin-problems-fungus-bacteria-infection-45937/
K

It would be good if the end results wee posted on the forum when something like this happens. It could be helpful to all of us.

Julirs, no matter what you decide I am sure you will do the right thing and know what is best. You have a huge heart for taking the animals in the first place with issues and all. God bless you and best of luck!!! Keep us posted!!!

carol5208 said:
Julirs, no matter what you decide I am sure you will do the right thing and know what is best. You have a huge heart for taking the animals in the first place with issues and all. God bless you and best of luck!!! Keep us posted!!!
Click to expand...

Thank you Carol and everyone for your support. I still have not heard from the Vet-I usually hear from her after lunch time.

Update-he is staying overnight-so I will have more news in the morning. This either means she did not have time to really get to him, she is waiting on test results, she wants to hydrate him, or a combination of all of the above. I trust her opinion so all is well.
I always call when it gets this late since I have about a 40 minute drive to their office on a Friday night, and don't want to incur overnight fees if I don't have to since they close at 5. The receptionist assured me that I will not.
As much as I hope he is treatable and non-contagious, I also want to find out what this could be. So I am cautiously hopeful.
You must log in or register to reply here.

Giving injections - Do his arms look swollen / skin saggy or am I paranoid?