an introduction to chameleons
Chameleon Introduction 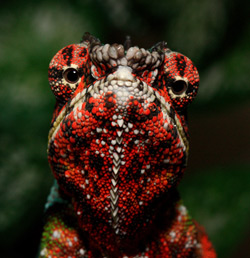 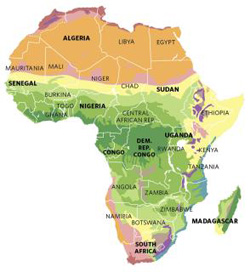 Chameleons are a wondrously unique group of lizards classified under the family Chamaeleonidae. These exotic reptiles are well known for their independently moving eyes, ability to change color, and bizarre method of hunting prey. Some species even possess prehensile tails and large dinosaur like horns. There are over 200 known chameleon species throughout the world and most reside in Africa and its neighboring coasts. These magnificent creatures have evolved and adapted to a wide range of habitats that include the rainforests of Madagascar, the high altitudes of Mount Kilimanjaro, and even the harsh sands of the Namib Desert.

Chameleons are notorious for doing poorly in captivity and for being very short-lived pets. Prior to the 1990's it was almost impossible to keep chameleons alive for very long, much less breed them. Due to the internet and dedication of advanced keepers the collective knowledge of chameleon care has expanded astronomically during the last two decades. Now there are large stable captive bred populations of several species and people can expect long term success when offering proper husbandry and care. There are still many common misconceptions about chameleon care, and many websites with contradictions or outright misinformation. The resources at Chameleon Forums have been carefully compiled by chameleon keepers all over the world and reflect many years of experience with a wide variety of species. The collaborative nature of this community has allowed chameleon keepers to recognize solutions to common problems, develop better nutrition, and improve the overall care for captive chameleons.

Conservation is an important topic that should be of interest to all chameleon enthusiasts. It is our responsibility as humans to preserve the diverse life found on our planet; we won’t get a second chance. Every chameleon species is protected under international law and many are truly endangered. It's crucial that chameleon keepers understand that the pet trade has a huge influence on conservation issues. If someone doesn't have the experience, time, and money to properly care for a wild caught animal then we highly recommend they only purchase chameleons that were hatched or born in captivity.

Learn more about caring for these fascinating animals by browsing the sections below.

Chameleons have evolved in ways that make them ideally suited to life among the trees and bushes. Their feet consist of five toes fused into two groups, three toes in one group and two in the other. These toe groups appose each other like pincers and make chameleons very adept at grasping and climbing branches. Many chameleon species also have a prehensile tail, which is of great benefit to tree dwelling animals.

One of the most unusual aspects about chameleons is their bizarre method of hunting prey. Chameleons are silent hunters and masters of the element of surprise. They focus on their prey from afar and shoot their tongue at tremendous speeds, grasping the food with a sticky suction cup-like effect. Depending on species a chameleon’s tongue can extend from one to over two times their body length. Their eyes are very specialized and actually move independently. This gives chameleons the ability to detect and focus on two objects at the same time, in almost any direction, and at various distances. When a chameleon is hunting they always focus both eyes on their prey before shooting their tongue. This grants them amazing accuracy and makes them very efficient hunters.

Chameleons can be visually stunning animals and depending on species produce some truly brilliant colors. Contrary to popular belief they don’t purposely change color to match any background. Instead, chameleons will change color with their mood, social situation, health, and for temperature regulation. Some of their most amazing colors are often displayed during stressful social situations, like breeding and territorial disputes. The color we observe on chameleons is the result of a complex interaction between four different skin cell layers. These different skin cells are collectively called chromatophores and either contain different types of pigment or reflective guanine crystals. The distribution of some of these pigments and the spacing of these crystals can be manipulated, resulting in the expression of different colors. 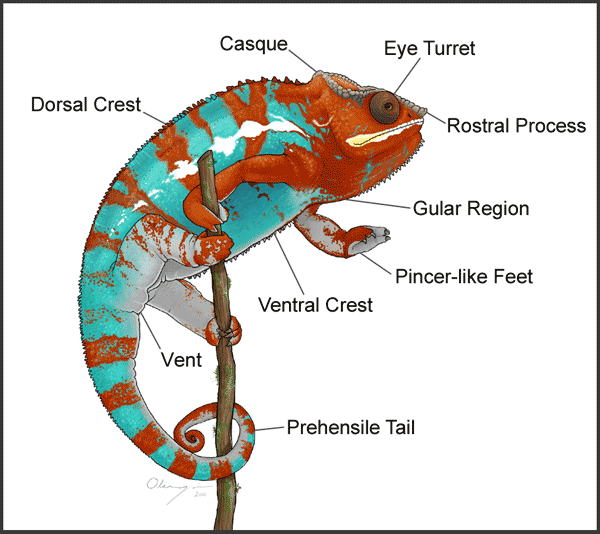