Looking for MBD Pictures For Project

Hey guys, I know this is a really odd request but I am doing a project called a fact sheet for school on MBD in reptiles. Basically it's like a little brochure you would give clients in a veterinary setting to rise awareness about a specific disease (in this case MBD). I figured since we all despise the bad info given by many folks outside the forums that maybe having some educational blip on MBD would be nice and I wanted to involve the community, even though you can find just any random pictures on google it just doesn't feel right to me for some reason.

So I am here to ask you all if you have any personal pictures of MBD cases in your chameleons or any of your other reptiles that you may have rescued. It can be of varying degrees, just so long as you have clear pictures of it. Please feel free to ask any questions and I will be happy to answer.

Both of my two rescues have MBD damage.

Here is my Merauke Blue Tongue Skink's xrays that were taken right after I got her. You can see the warping of her spine and tail. 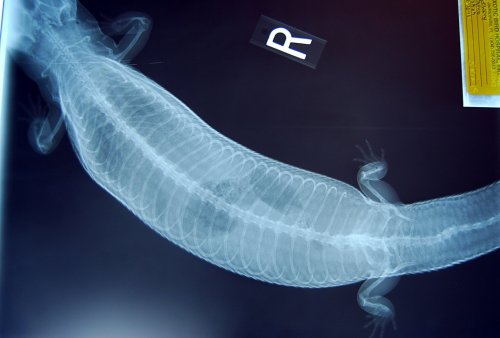 Then just a normal photo to show her hip bump. 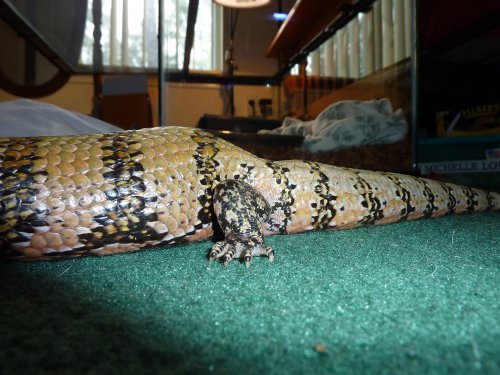 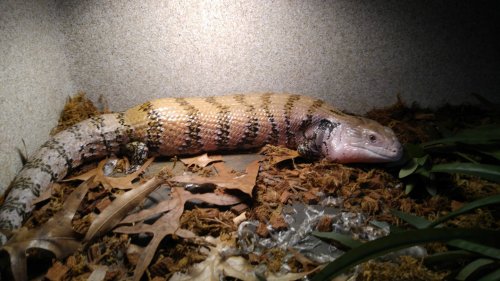 My Veiled rescue has evidence of MBD damage on his left knee. 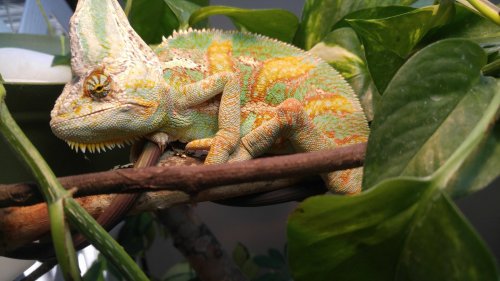 KLowery88 said:
Both of my two rescues have MBD damage.

Here is my Merauke Blue Tongue Skink's xrays that were taken right after I got her. You can see the warping of her spine and tail.

Then just a normal photo to show her hip bump.

My Veiled rescue has evidence of MBD damage on his left knee.

How cool are those x-rays! You have very beautiful animals as well. Thank you for the pictures

AlaskanReptile said:
How cool are those x-rays! You have very beautiful animals as well. Thank you for the pictures
Click to expand...

You're welcome! I wish the side view included more of her hip area, but they were mostly concerned with her lungs since she had pneumonia. She was also very wiggly, so they had a hard time taking them. Good luck on your project!

I'm not sure if any of them are good enough as the only physical sign she was showing was bowing of the legs, but you are welcome to use any of the photos of my veiled Jane from the thread here: https://www.chameleonforums.com/threads/could-use-help-and-guidance-new-veiled-owner-with-new-rescue.144910/ or my gallery of her here: http://wodesorel.com/chamjane . The gallery is in order newest to oldest, which shows her progress.

You're also welcome to use any photos of The Kid, which is my current leopard gecko rescue. http://wodesorel.com/kid There were three that were posted for sale on a Facebook BST site, and it was obvious from the photos they were at death's door. At the urging of the RFUK group, I explained to the owner what was going on and asked if she would be willing to give them to me if I agreed to get them veterinary help. To my surprise she agreed. The owner had followed all advice from the pet store - they never told her to dust crickets, and the tank was around 100 degrees. She had even brought them in about a month before I got them because she was so concerned about how thin they were, and instead of referring her to a vet they sold her just Reptivite and told her to use it once a week... They weren't even her geckos, she and her husband were disabled and their adult daughter dumped the geckos and a dog on them when she moved out of state. They were doing the best they knew how, since they had never had reptiles before.

One was so thin (15 grams) that we believe his organs shut down. His entire body was rubber and he bent in a U shape when picked up. The second looked to be the healthiest, but had broken legs and a severely broken jaw, along with being like rubber. He died from massive seizures a week in. All three had multiple layers of stuck shed on their feet, tails and vents. The third has a seriously misaligned back, and had a jaw so rubbery that he wasn't able to bite down on anything. MissLissa and Ferret were a blessing in getting him stabilized and on the road to recovery, and keeping me from freaking out. He's really made leaps and bounds in the last 6 weeks. His one back knee seems to be shattered, and both front legs have compound fractures that will never heal properly. We aren't sure what is going on with his back as my vet wasn't worried about doing x-rays, but it's squirrely. I had to assist feed liquid food for almost a month before his jaw solidified enough to where he could eat whole food. His crickets still need incapacitated and tonged, and he can't really chase anything down yet, but he is on a full insect diet again, along with RescueCal +, and metacam to keep his pain levels down. (Without the metacam his feet swell and he refuses to eat.) Long term we just have to wait and see what happens, but it's looking good. He's always perky and he's very active.

These are photos of the two that didn't make it, along with the original photos all three were listed with:

Googled it and look at all the photos...
http://www.google.ca/search?q=Chameleons+MBD+photos&btnG=Search

wodesorel said:
I'm not sure if any of them are good enough as the only physical sign she was showing was bowing of the legs, but you are welcome to use any of the photos of my veiled Jane from the thread here: https://www.chameleonforums.com/threads/could-use-help-and-guidance-new-veiled-owner-with-new-rescue.144910/ or my gallery of her here: http://wodesorel.com/chamjane . The gallery is in order newest to oldest, which shows her progress...
Click to expand...

Just awful... The state some people let their reptiles get to is so horrifying.

KLowery88 said:
Just awful... The state some people let their reptiles get to is so horrifying.
Click to expand...

With the Chameleon I nearly lost my crap on the woman. She new better, she just couldn't be bothered. The cham and the two leopard geckos and even the freaking hermit crab I got from her were 50% underweight, dehydrated and in completely incorrect environments. She wasn't even going by what the pet store told her, she was just making stuff up as she went along. I think she maybe fed them once a week and didn't bother to clean anything for months at a time. There were two beardies she had for sale that I was trying to work up the funds to rescue, although a friend of a friend ended up with them instead, which was awesome and just in time. They had no heat and no UVB because the bulbs burned out a few months ago and since they were for sale she wasn't going to bother spending money on them. They were dark from being cold, starved and dehydrated, and had the start of MBD. There are even more herps that she's trying to sell and make money on, and not caring for them in the meantime. (Not a reseller, these were her "pets".) I tried reporting her for animal abuse but the county humane officer won't deal with reptiles.

With the family with the geckos I was going to go in and loose my crap, but once I met them and got the back story, I realized it was just a really wrong set of circumstances that lead to an older couple with very little animal experience getting in over their heads with no one around to tell them how serious it was. They had been trying to rehome them for several months, but no one was interested. I only stumbled across them because they had been cross posted to the wrong group! They had no idea that vets saw reptiles, and honestly, I don't think they could have made any more sacrifices to afford take them.

This is a rescue I adopted