Hi all, I mostly just need to vent and complain to some like minded Cham folks. I went on vacation for about a month, I left my pets with the same pet sitter I have used for the past few years and they have always done an AMAZING job. Until this trip. Before leaving I showed them exactly what needed to be done for Jameson, left notes with as much info as I possibly could, and because they have watched my animals before with no issue I felt confident that everything would go smoothly.
Two weeks in I get a call saying that the linear UVB bulb “exploded” I thought it was strange but just let them know where his old dome UVB was and figured that could work for the rest of the time we were gone and I could worry about a new linear bulb when I got home.
Then around 4 days ago (the day we were flying home) I get ANOTHER call saying that the Mistking is malfunctioning and the timers weren’t working and the mist cycles weren’t happening. Also strange because it was working perfectly before I left home. But again, I just gave them instructions to use the hand mister at least 4 times a day. Flash forward to getting home that night, the linear bulb looks like it got dropped somehow and broke, and the mistking is no where to be found. So obviously some one was not being honest with what happened.
They’re insisting that bulb broke on its own and said THEY THREW MY MISTKING INTO THE GARBAGE BECAUSE IT BROKE AND THEY THOUGHT THEY WERW DOING ME A FAVOR BY GETTING IT OUT OF THE HOUSE.
Thankfully, Jameson seems to be okay, a little dehydrated but nothing too concerning.
it goes with out saying that they did not get paid, will be purchasing a new Mistking, and will not ever be left with my babies again.
Moral of the story don’t trust anyone with you Chams and never leave your house

They must have bumped the MistKing nozzle and it sprayed the bulb while it was on. That is one of the quicker ways to destroy a bulb.
I hope they aren't selling your MistKing somewhere. Keep an eye on Craigs List.
view our sponsors

Lol "and never leave your house".That is a terrible story, but a hilarious conclusion!! I hope they DO get you a new mistking!!!!

65" stopped working, we through it out. BMW wouldnt start, we scrapped it. Dont bother looking for the title.

When i go on vacation it will be easy now.

"Ok put the meat ball on the plate infront of the closet, it should magically disappear in a few hours"

"pee pee pads may end up with poop on them, source is unknown"


(in reality, if left unattended, the 3ft tegu will get out of his cage, hide in the sheets with the heatmats in the closet till the end of time, and just come out occasionally to forage/poop)

Worst thing I ever had happen while on vacation was getting sent a picture of two of my chameleons in the same cage and being asked "which one goes where?". Fortunately they were sisters in a divided cage and when my sitter cleaned the cage, which she didn't need to do, it opened passage between cages. They hadn't seen each other in a while but were still young enough to not intimidate each other and she was able to sort them out.

There is only 1 person i can trust, besides my husband. So my husband and i go on vacation at different times now. Hahahahaha

I only leave my babies with my mom, I dont think I trust anyone else on this earth. If my mom cant do it, I dont go lol

This is why I had to skip out on PokemonGOFest this year. I didn’t trust anyone with my babies Thankfully your babies are fine but horrible pet sitting experience

Now that I have a reliable feeder that I can stash with loads of bugs and some gut load and a larger reservoir for my misting system I'm ok going 4-5 days without a sitter.

This is exactly why we need to start planning the Cham Compound**.

What kind of feeder?

Daesie11 said:
This is exactly why we need to start planning the Cham Compound**.

Yes exactly!!! Then we know our babies would be fine

JacksJill said:
Now that I have a reliable feeder that I can stash with loads of bugs and some gut load and a larger reservoir for my misting system I'm ok going 4-5
Click to expand...

What kind of feeder?

I was in on the testing of the "Shooting Gallery Feeders" They hold a lot of bugs and only crickets can escape but mostly they don't even try to leave. I haven't had a loose cricket in the house since I started with this latest version. I put superworms, crickets and Dubia in all at once with a long piece of carrot or bell pepper (too big for my chams to eat). My chameleons pick off the supers first day, then the crickets the next and finally the dubia. That way I know they have food for at least 3 days that has some gut load.

My daughter knows me too well. This is the popsocket she got me for Christmas because I would never go anywhere. At the time nothing was automated. I was stressed just going to the store lol 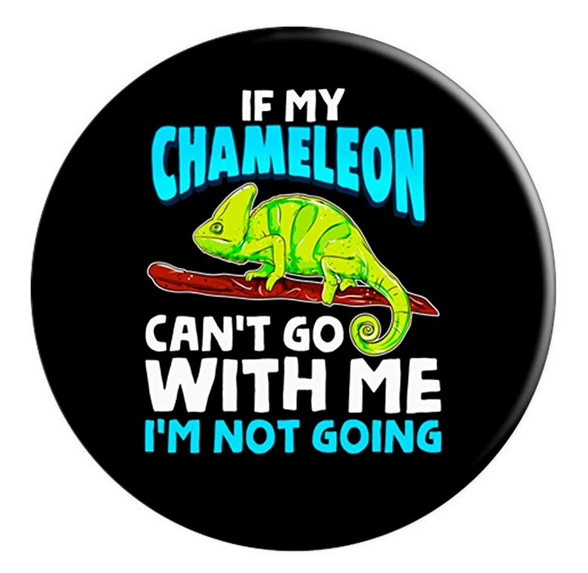 Daesie11 said:
This is exactly why we need to start planning the Cham Compound**.

LOL set it up likea doggy day care. "yea here they are, which one is yours, cant you just whistle for her/him???"

nightanole said:
LOL set it up likea doggy day care. "yea here they are, which one is yours, cant you just whistle for her/him???"
Click to expand...

Cham Compound will also include community gardens for all members to farm feeder gutload, as well as bug farms for all the feeder colonies. Everyone does their part, everyone benefits. One of us. One of us.

Daesie11 said:
Cham Compound will also include community gardens for all members to farm feeder gutload, as well as bug farms for all the feeder colonies. Everyone does their part, everyone benefits. One of us. One of us.
Click to expand...