Staff member
They're all separate. The older babies are together, the adults are in their own viv and the youngest baby is going to join the older babies in a few weeks when he's a little bigger. Right now he's in a baby cage (biggest cricket keeper style). The big baby viv is really densely planted so hopefully they will all get along! Need to wait for a weekend when I can keep an eye on the transition.

if you still have babies and are selling I have been looking for 2 female brevs. pm me?
view our sponsors

Excellent!... SO good to see the pics youve posted.. please keep us updated as to how everyone is doing ..

Awesome. What else needs to be said?

Staff member
Thought I'd give an update:

I've sold several of the babies and it looks like my parent brevs are done laying for a while. They've been trying to procreate...the male does a weird little dance while they're mating...but she's not been gravid or laid eggs in the last 2 months. And I found 3 shriveled eggs in the substrate - the last clutch she laid must not have liked the higher temps. Unfortunately it was hard to keep temps in their viv down when it was 108 outside here. So I'm not sure when she'll start making eggs again so no neonates for now. I actually only have one baby left, who I originally thought was male and now I'm leaning towards female.

I did take the last few babies to a summer camp for high schoolers wanting to be vets along with my super friendly panther. He crawled over near 40 kids without ever once showing any signs of stress and he was shooting bugs out of kids' hands! He's so awesome. No one was able to hold a baby brev, but I did show them off: 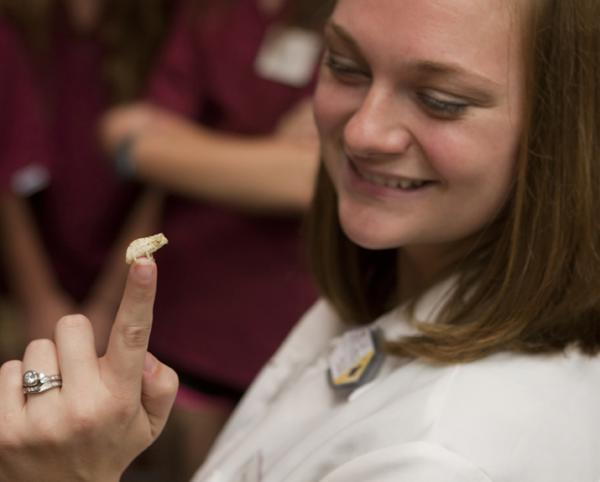 I actually sold a baby to a teacher in another city who has a lot of classroom animals for her pre-vet class. She makes them do research on the animals she has and it turns out one of the campers that saw the babies with me is actually in her class! That was kind of neat because she recognized him. I'm glad that he went to educating kiddos.

Sadly I did lose one baby. It was the first cham I've lost, my only girl baby and it was one of the first babies that I had hatch. I noticed she stopped eating for about a week and then she had some dark discoloration around her waist, which was very plump. Nothing in the environment had changed and up until then she was eating like a champ and acting totally normal. Once I saw her at the bottom looking like she was straining but she crawled back up when she saw me. I don't know if she was maybe egg-bound or impacted. She didn't have eggs when she died but it's possible she managed to lay them but the stress was just too much afterward. It was very sad but unfortunately there's not a whole lot that you can really do for these little guys when they start showing signs of sickness other than making sure everything in the environment is right and minimizing stress. Poor little cham baby...