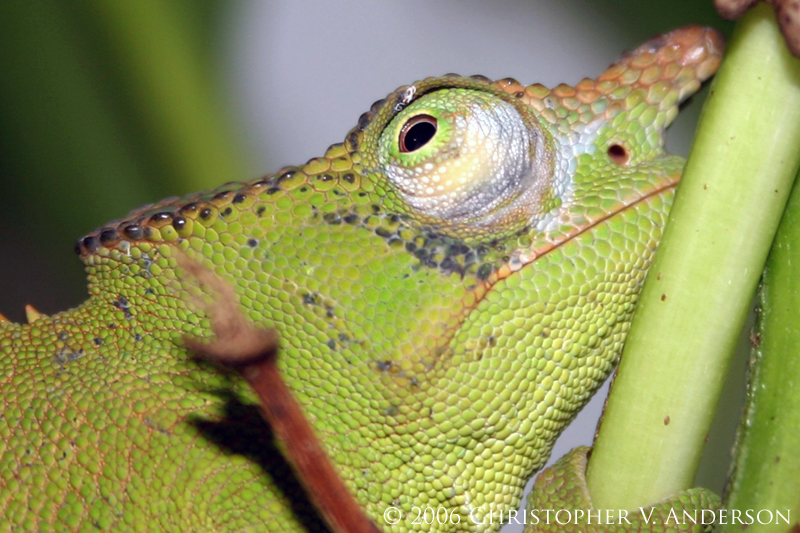 Just thought people might find this female I have interesting. Enjoy!

I wonder if this has been Scientificaly Diagnosed yet? Most of us know about the Veileds, but now another species? Is this something that is found in the wild, or something that maybe we as keepers have generated? Either way I think it is Interesting.

Staff member
She's a wild caught female. As you can see by the scuff behind the eye, she's fairly recent WC. The original veileds that showed this defect were WC as well.

So it may be an environmental thing? Something that is happening in their habitats. I assume the Fishers is from africa/madagascar area? And Veilds are from Middle East. I wonder what could be happening in these diffrent areas to cause the same effect. I dont think it would be a part of Evolution? Then again It may. Still Interesting.

Staff member
Fischer's are from Tanzania and Veileds are from Saudi Arabia and Yemen. The occurance of this same defect in different areas is no different then the occurance of albinism is different areas, it happens at a low rate as the genetic code encounters any one of a number of potential defect types that effect the particular code correctly. None occur commonly in large populations with good genetic diversity but there are the rare occations where they show up.

I was wondering if anyone knew about the translucents. does the area on the body which appears to contain no pigment or chromatophors have the ability to change color? Also, are they sensitive to sunlight?

LOL I just got that cham in last week, guess I didn't notice it.It looks almost like a white scar to me but could be anything.

This "translucent" defect will definitely effect the UV sensitivity of the animals, its just not yet fully understood to what extent.


PEPPERQUILL1 said:
LOL I just got that cham in last week, guess I didn't notice it.It looks almost like a white scar to me but could be anything.
Click to expand...

Yeah, this animal did come in on one of your shipments. Its a very nice specimen, I was very fortunate to have Mike there to pick it out for me!

As for it looking like a scar, I'd have to disagree. Scaring in reptiles, especially chameleons, looks very different and its rare for the scalation to return in perfect arrangement and shape as it has in this animal. The black mark around the eye is a bruise but the white isn't. Thanks for your comments though!

I have seen something nearly identical to this in an old male deremensis i had a few years ago. He was normal for several weeks after arrival. Then, his eye shut, and scabbed over. After a month or so ( I wasn't keeping what you would call "records"), the scabbs came loose, and fell off. under the scabs was thin, pink skin, with no scalation. I healed over a few months, eventually back to normal.

During the healing, it looked very similar to the skin on this animal's eye - translucent, with sparse, yet even scalation. I've got pics on my computer at home. I'll try to remember to post them when I'm back in Raleigh.

Is the translucent skin apparant anywhere else on the body?
P

Hi,
Yeah thats what I thought it looked like some sort of scab or something.I guess me an Mike didnt catch it...it was really late.Good luck with it anyways Chris.

Are you saying that the skin looked like this, then scabbed over, then was thin, pink skin, with no scalation and finally went back to normal? What you are describing sounds like a burn. The edges around a burn don't end as suddenly as the white in this animal but rather gradually become less sever as you move away from the burned area. Please do post pictures but I don't believe this is a precurser to a scab as there is no injury present and as you can see, no scabbing forming.

I am curious, Holland, how this seems any different to you then the patches on your veileds, other then the fact that it slipped by you? All the photos I've seen show identicle traits.

No, the animal had a weird infection of his eye. Definatly not a burn ( didn't use heat lamps on deremensis), but the injury healed like a burn. It turned black - he had a perfect black eye, only the skin of his eyelid was black. It then scabbed over, sloughed off, and resulted in thin, pink scaleless skin. When it healed, it first formed scar tissue, and then started to reform scales. As it was healing, after the scab/skin sloughed off, the skin looked very much like this.

I have pics during the early stages of healing, but I do not believe I have pics of his eye when the scales started to "come back". It'll be a few weeks till I get back to my computer - Training starts on October 9th.

I would be very doubtful that this is a smilar thing to the see-through veileds IF the only appearance is on the eye. The veileds had a pattern, legs, eyes, lower jaws - some had more, but there was a pattern, suggesting genetic cause.

It will be interesting to see if she stays the same, or if she "heals up". The look of her eye is similar to some healed up burns that Ive seen. White skin, then some scalation and slight pigmentation, eventually filling in.

Please do send the pics when you get back. I still doubt this to be anything like what you are talking about but I guess time will tell since yours returned to normal after a couple months.

As for the veileds showing multiple locations of the defect, this isn't always true, I've seen photos of numerous specimens over the years from this European veiled lineage that had highly variable degrees of translucent paterning presence, including quite a few with only a single area. At any rate, it isn't really a big deal since I have no interest in selling this animal, let alone for a price other then that of a normal animal and I don't plan on allowing any offspring to be inbred to try to breed the trait out.

Hi,
It looks much different then with the veilds.The veilds have it in more then one spot and it doesent look like that.Yeah Chris it did get past me, no big deal.I probably would have passed it off as nothing if I did see it.But good luck its a relly nice fischerii.

Staff member
My original question remains, Holland, how exactly does it look different?

As you have stated in your adds and is evident by the photos available online of these animals, the extent by which they can exhibit this trait is highly variable. I've seen photos of animals with single patches of the translucent area before, it does happen and not all that infrequently from the photos I've seen since this trait first showed up in Europe.

Moving away from that, how does the effected area look different, other then that it is small? It has white scalation, translucent interstitial skin and scales and dark patches showing through (bottom side of eye turret). The only difference is the scale by which it is exhibited which results in a smaller area of translucent scales. 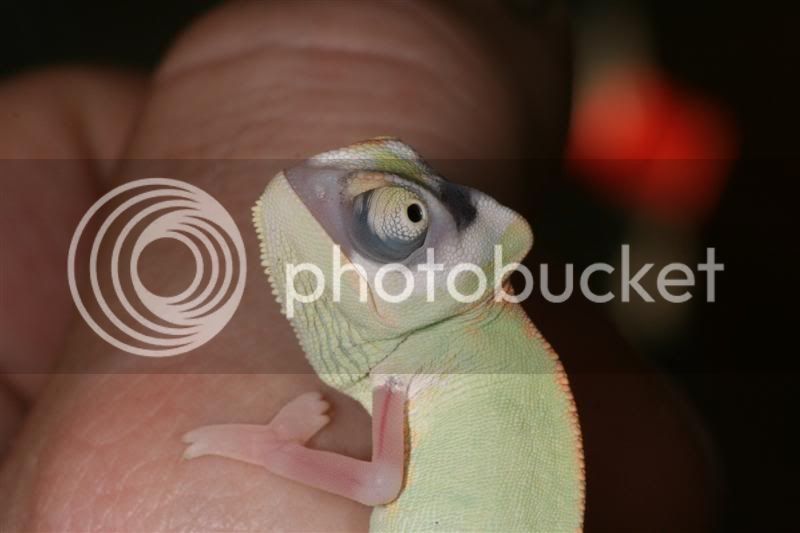 You think it is possible that it is some kind of chemical contaimination in the ground. Possibly from rain or run off. Both of those areas are pretty close to developing commercial farmlands if I am not mistaken.
Last edited: Sep 19, 2006

Just thought people might find this female I have interesting. Enjoy!

Haha! Pretty interesting Chris! All you can do is wait and see what happens with it.
A

god not this again
P

Hi,
lol, yeah not this again.I don't have the time or any reason to argue over this again and I am sure no one wants to listen to this.Chris I guess you can't understand I was posting my thoughts, honestly if it is a translucent or something else hats off to you.But anyways good luck I hope you get some pied babies or something.

Who's arguing? I see that you're posting your thoughts but as usual, your thoughts lack any explaination or background information to complete the discussion. I would like to hear a proper explaination as to why you believe the two are different but as of yet, you don't seem to be able to provide anything other then "it doesent look like that" and "I probably would have passed it off as nothing if I did see it." Neither explaination has any true validity yet for some reason you have made no attempt to complete your thoughts even when asked for more information as to your opinion. You do have more of a reason for your opinion then the lacking explaination you're exhibiting thus far, correct?

Chris
You must log in or register to reply here.

A
Questions about possible Mouth Rot

Another translucent joined the crew!