I've been on the forums for some time now, using it as a fantastic knowledge source. However this is my first time posting and I thought I might as well go all out with it and introduce my little guy. His name is Mugetsu (Mugi for short) and he is an Ambanja Panther Chameleon (shameless Screameleons plug!). He turned 6 months on Dec. 25th. His name means "moonless" as in "moonless sky" (無月, むげつ). The reason I named him this is because chameleons are diurnal, therefore the moon will never grace his sky.

Eh, he'd probably try to eat the moon if he ever saw it.

I have a Madagascan hisser colony (shameless Greg's Exotic Invertebrates plug!) and black silkworms as feeders for now. I'll be starting a Green Banana roach colony soon. When he gets bigger I'll add in hornworms as well. When ever there is a reptile convention in town I go and pick up other opportunity feeders as well. I hate crickets with a burning passion (Mugetsu can't be bothered with them, so it works out), but roaches and silks are fantastic (read:easy) to keep, healthy and Mugetsu loves them. I even managed (by sheer luck) to get my first batch of silks to pupate, mate, lay eggs and have the kego hatch.

Anyway, enough talk. As they say on the Interwebz, "Pics or it didn't happen". 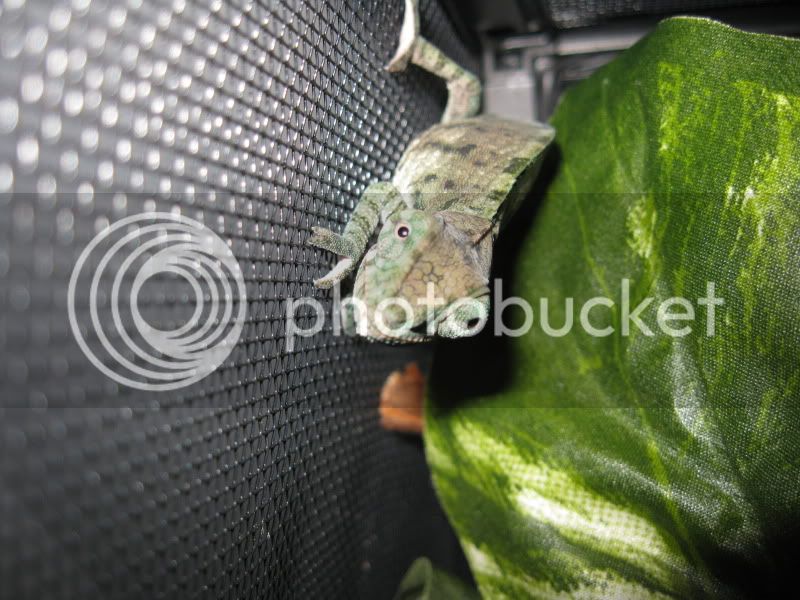 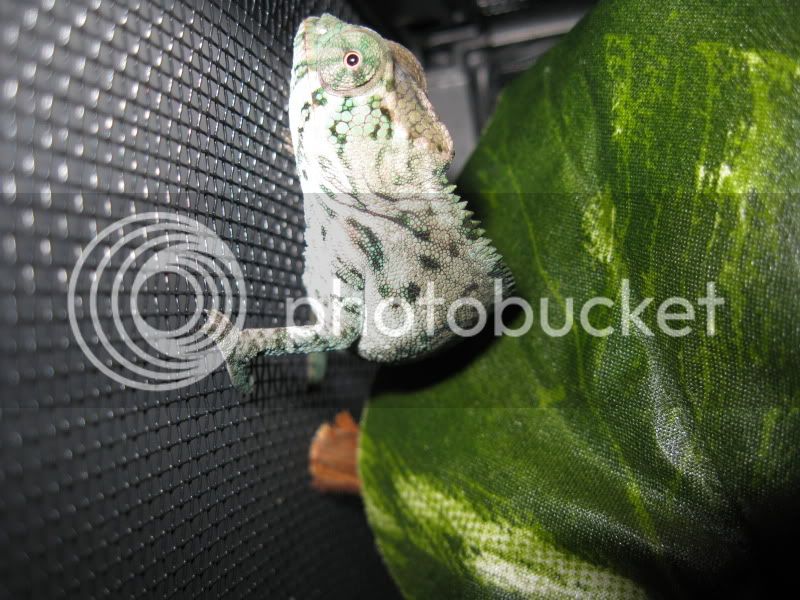 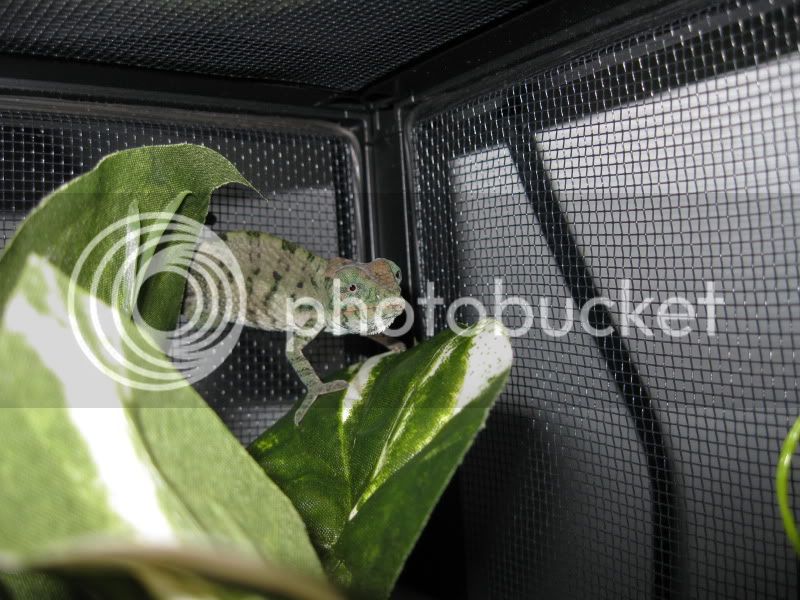 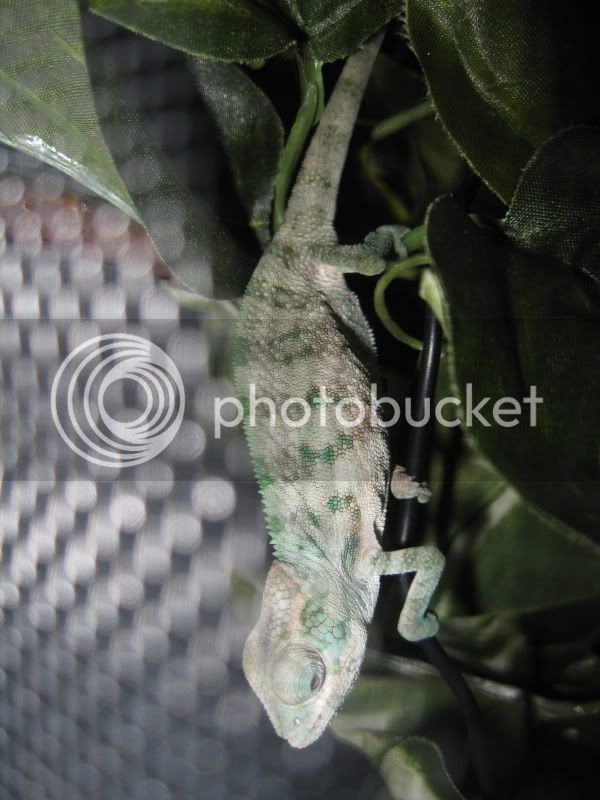 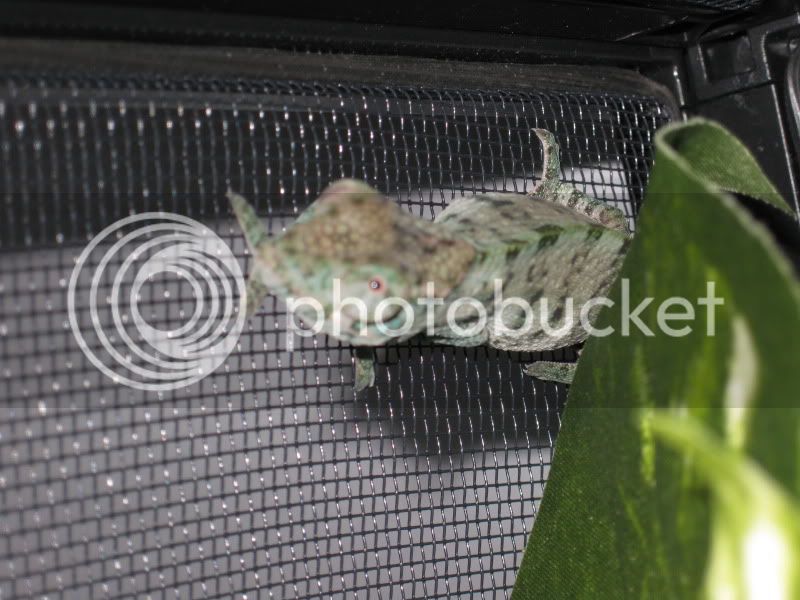 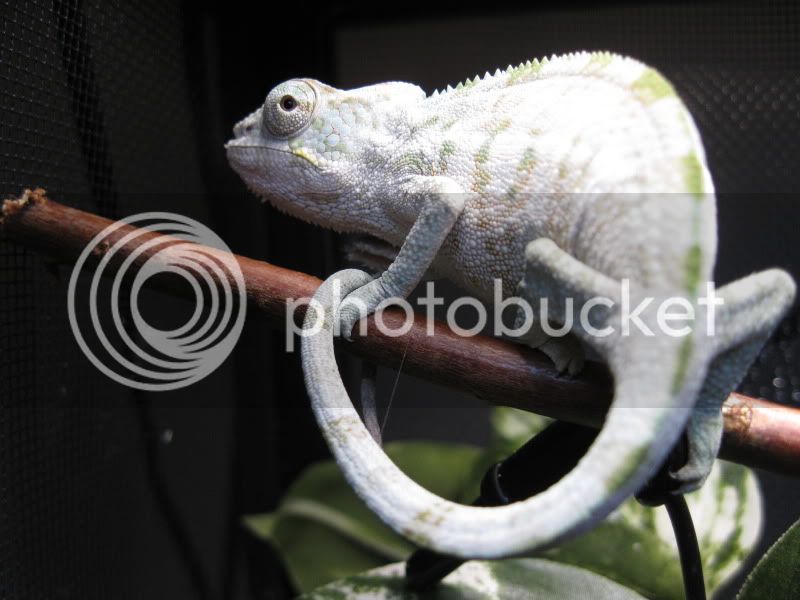 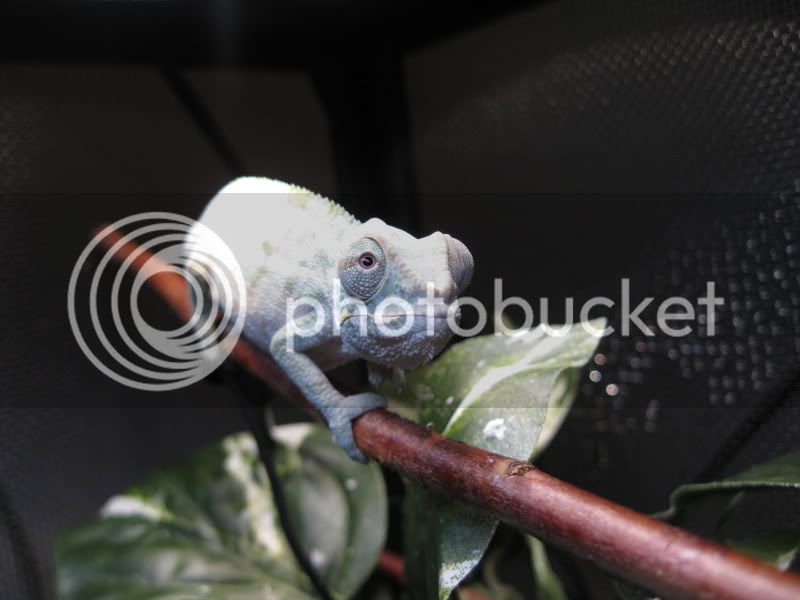 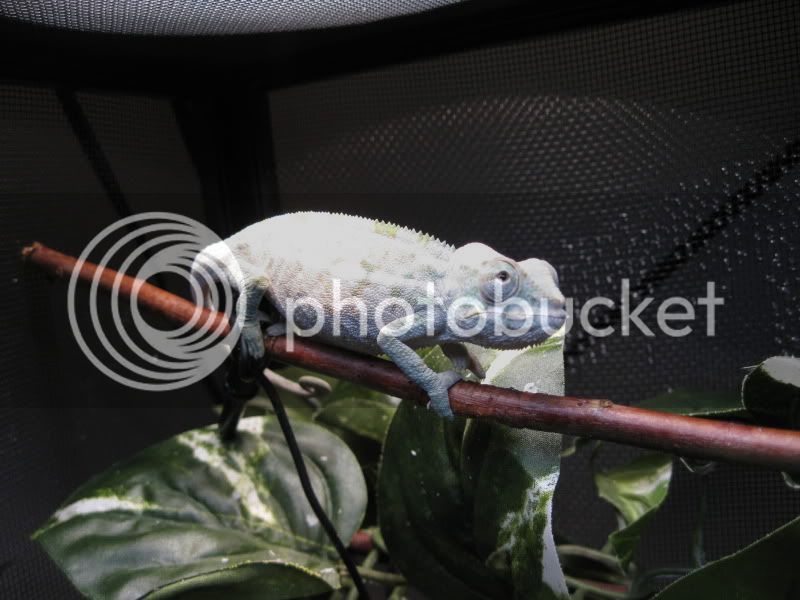 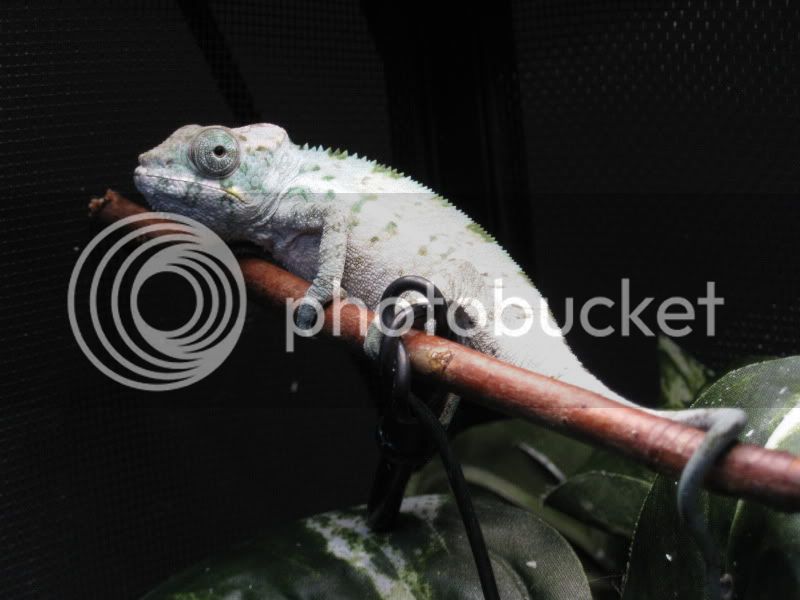 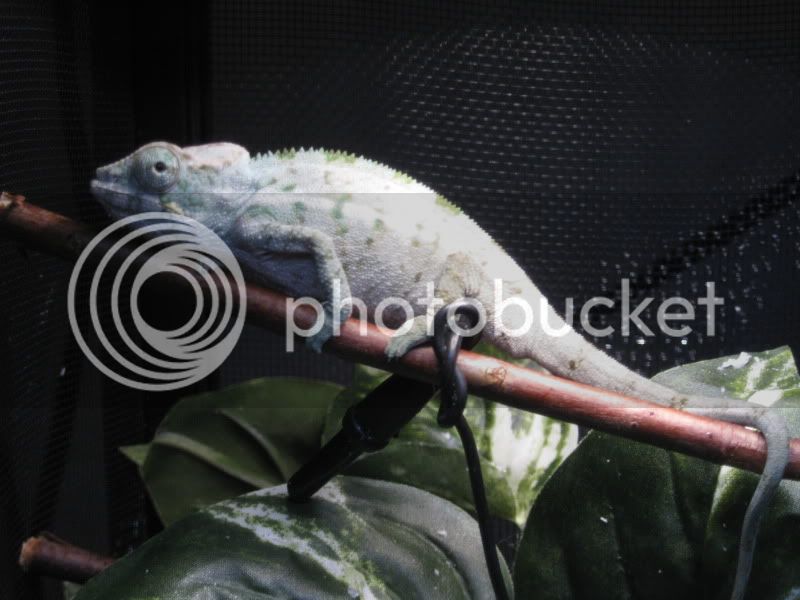 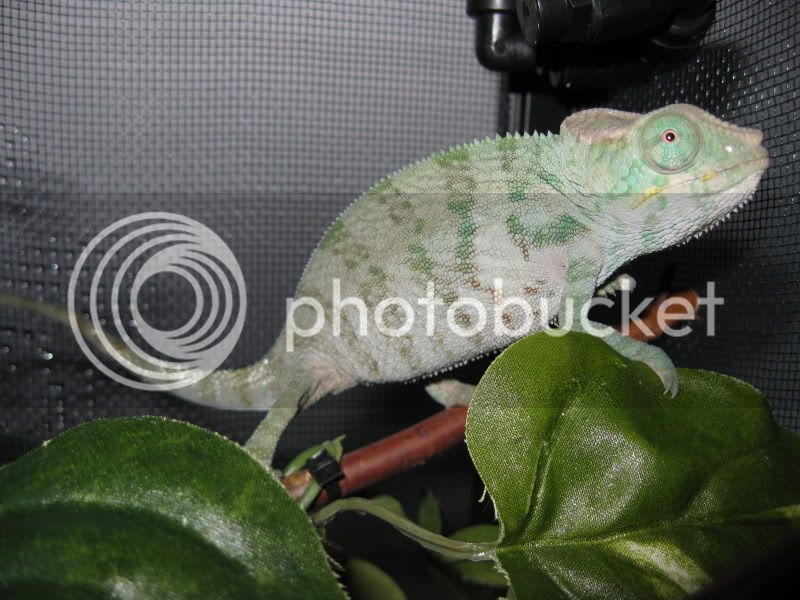 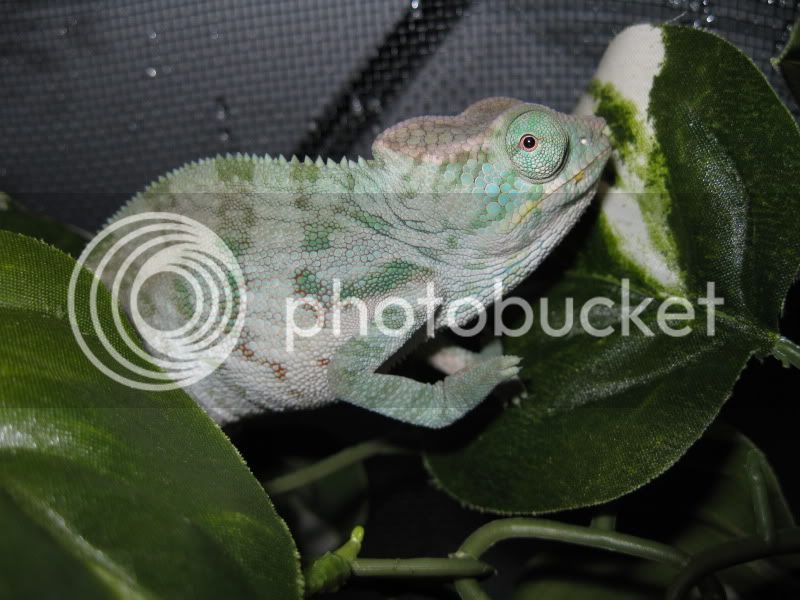 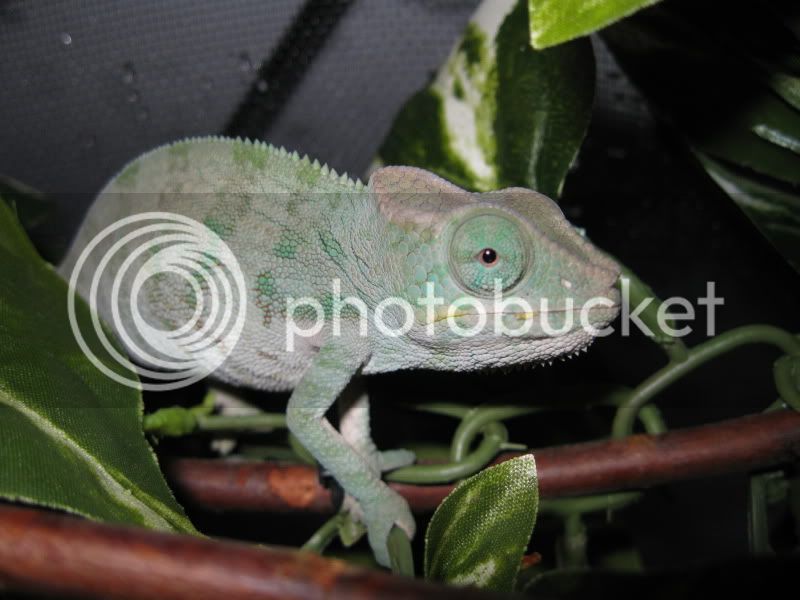 Here's a vid of him eating a silkworm moth as a treat:

And eating a hisser nymph (apologies for any nausea caused by my apparent lack of video-taking skills):

Mugetsu is my first chameleon. In the past I have had: an Ornate horned frog, White-Lined Gecko, Tokay Gecko, Oriental fire-bellied toads, Bibron's Gecko, fish (Tiger Oscar, kissing gouramis, neon tetras, plecos, others), Green Anole, and the occasional wild-caught salamander and garter snake.

I have to admit though, Chameleons are really something else. Just seeing him with that slight frown (isn't it funny how a panther's mouth slopes down just enough to make him look like he's always slightly displeased?) makes me so happy. He's family, what can I say.

Well, that's it for the intro. I'll post some pics of the two of us together at some point in time.

Thank you so much, all of you on this forum for your indirect insight. Who would have thunk you guys would know chameleons?

Welcome to the forum, nice looking guy. i like the name Mugi. We are getting a pretty good number off you New Yorker's. You can have your own sub group. Several other location do this, but Montana where I live - well not so much

Ahh your little guy is a doll! Welcome
You must log in or register to reply here.