George is in hospice

Staff member
George is my 6 year old veiled chameleon and my oldest. He had papillomavirus warts that I removed twice and some MBD when he was younger before I got him. He also had a tongue injury causing it to shoot crooked so he has to cup feed. George has been through a lot. He's always been a pistol, in the endearing way to nicely describe him aggressively trying to eat me if I just look at him or get near him. The Friday after Christmas George crawled down to the bottom of the cage and just sat there grabbing his own feet, and he hasn't perched since then. He will walk around the bottom a little and still eat superworms in front of him. But he's not trying to eat me anymore so definitely something is wrong. He lost about 20 grams in just a few weeks and even though that wasn't a ton for him he looked bony. So I did X-rays, which were pretty normal aside from some mild arthritis of some of his vertebrae and he had good bone density. But on his bloodwork his phosphorus has doubled since it was done 6 months ago. His calcium levels and supplementation have stayed about the same, and his uric acid is normal. But that increase in phosphorus is most consistent with early kidney failure. Dr. Alfonso was nice to look over everything as well and agrees that is most likely and nothing else seems amiss. 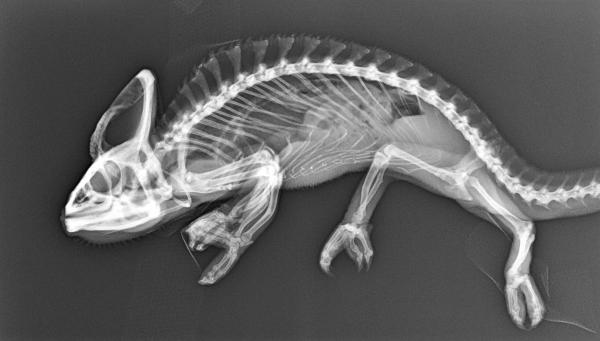 I moved him to a hospital cage setup, which actually just the cricket bin. He stays warm this way and isn't interested in perching or climbing so he's happy with it. He's been getting fluids under the skin to keep him hydrated and flush out his kidneys and is still eating. He put the weight that he lost back on. His front feet are more normal now, but his hindlegs are either grabbing each other or just kind of limp behind him sometimes. I'm still not entirely sure why that is. If his kidneys are enlarged they could be causing discomfort to the nerves of the hindlimbs, but his bloodwork doesn't look that severe yet.

I've tried pain meds and an injectable joint supplement/anti-inflammatory in case he's painful or has severe arthritis. They haven't seemed to make a difference for him. I'm going to start a phosphorus binder to help reduce the levels of phosphorus because that can make them feel crummy. He's an old man so I consider him on hospice care now regardless of the cause. If he moves back into his old cage that'd be great, but I have a feeling we won't get there. 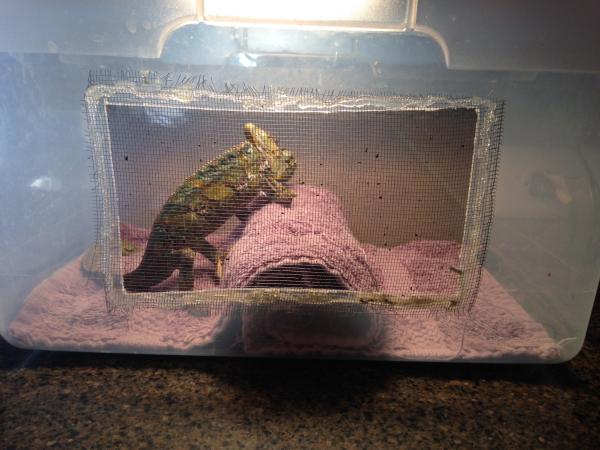 Poor George. I believe he has the best care he could hope for in a time like this.
view our sponsors

Dayna I am so sorry to hear it isn't getting better for George.sadly we never know how much time we have with any of our chams. I know your care has made his life better for him.

I'm so sorry to hear this poor George <3

Oh my gosh, I'm so sorry to read about George. I'm sure he appreciates everything you can offer him, and he looks good for a 6 year old man. I really did enjoy reading the previous thread about you performing surgery. Thank you for sharing that.

Sorry your guy isn't doing so well. He could not be in better hands though.

i am so sorry to hear this unfortunate news about george..you will both be in my prayers.

Dayna, I'm sorry to hear that George isn't feeling well. He's lucky to have you taking such good care of him and keeping him comfortable as possible.

Poor George. I am so sorry to hear he's not feeling well. I will be keeping him in my prayers and know that you will take the best care possible of him.

Dayna, I'm so sorry to hear that George isn't doing well. I know he is receiving the best care possible so hopefully he can pull through this and be back to climbing around and trying to eat you again very soon!

Sorry to hear Dayna. It sucks getting old, no matter who you are it seems. I have a 6 yr old Panther that I have had for almost 2 yrs now. He can still perch but falls a lot, so he prefers to be on the bottom of the cage. If he is in his indoor cage he will stay up perched sometimes, but when I take him outside to the big cage he just climbs to the bottom, basically falling on his way down. So, I now just stick him on the bottom and he basks in the sun and spends his days like that. I hand feed him through the cage and water him by hand also. I guess bottom line is, just make them as comfortable as possible. I figure when he stops eating and losing weight, then maybe it will be time to let him go.

I'm so sorry that George is doing poorly, but as has been said, he's got the best possible care right now. You've done amazing things for him, and he's lived a great life with you. Good luck.

I sorry to hear about your George.. I'll be saying a prayer for him and you..

So sorry to hear about George- at least he is in a comfortable and warm place with excellent care. Keep us posted.

Staff member
Thank you all for your support! George was a bit more grumpy this morning for his meds, so maybe he's feeling a little better with all his fluids he's gotten, which he's none too pleased about. He and Oscar are my old men chams so it's just keeping them comfortable and happy for as long as I can. If George was acting more sickly then I'd consider letting him go, but he's still alert and wanting to eat so I'll try to give him whatever time I can.

Carol - I've added triangular hammocks in several places in Oscar's cage because he's falling quite a bit due to his gout as well. He doesn't like to lay on them like I thought he would, but they do break his fall and catch him so he can get back on his perch or at least not drop so far. Might be a good addition for Lenny too.

Staff member
So sorry to hear this. I know its never easy to watch a pet get old, but it is some comfort to know that they were lucky enough to get to that point. I'm sure he is in the best hospice facility in the world!!!

I'm so sorry, he couldn't be in more capable hands or more loving. You're a great mom. God bless George.

Staff member
Not looking so great for George...he spent most of today and some of yesterday just laying flat. Not on his side, but not supporting himself. And he's not too interested in eating anymore. But still alert and looking around and not acting uncomfortable per se. I'm giving him through the weekend with some critical care feedings and his meds and if he's not looking better by the time I go back to work on Tuesday I'm going to take him with me to let him go.