The "I'm Been Humped By My Chameleon" Club

Just as the title says!! Who all here as been humped by their chams!?!

Just the other day, my bf was 'raped' by mine! XD
I had him in the bathroom with me, just chilling, and my bf takes him from me and whatnot. Yeah sure. He holds Dingo up the the mirror because we were curious if he'd get angry if he saw another cham or not. Well shortly after he saw his reflection his colours fastly changed to a very VERY angry black. He bonked his nose a couple times against the mirror then proceeded to grab very firmly with his back legs and rub his bum furiously on his hand.
He's rubbed his bum against me a couple times while still a light happy green (and wasn't in the bathroom with a big mirror for him to see a reflection), but not as 'mad' as he did to my bf. So I'd call that 'rape'.

Here's a pic to show how angry his colours got:

*edit: Lol... Just after I told the bf that I posted his 'rape' story on the forums, he quietly says "I still have the scars... " lol


Post your stories of when your cham first humped you! Join the club!
(I should totally make little images for people to put in their signatures lol)

hahahaha amazing!! Your cham is a looker how old is he??
H

Does he have any red like the drawing you made?
H

Sort of: http://a3.sphotos.ak.fbcdn.net/hpho...434268100403_814300402_17761660_5035026_n.jpg
In my drawing I did exhagerate the colours a bit. But not to the point where he's a rainbow (like in cartoons) lol.
He is starting to devolpe his reds and blues more I'm noticing though. His lower end has more (lighter) blues as well as solid turquiose spots on the main of his body. Then some of his stripes are starting to get more reds. I think the rephasy 'super pig' powders I occasionally dust (and gutload with) the crickets with is working. I was told that rephasy would bring out the red and blue pigments.

I have never seen a Veild with red pigment before! Blue yes, red no. I guess it is a brownish red after looking at the picture in the link. Very very beautiful chameleon!!!!
Last edited: Mar 24, 2011
D

The closest experience I have is when I introduced a large silkworm to my amibilobe. He had never seen one before and it seemed like he was trying to mount it. My guy is too scared of me to try to hump me!
M

Storm had red bars. I think it would be awesome if he developed red. I don't think chams change color based on what you feed them though. Maybe someone can enlighten me on that...
H

melric said:
Storm had red bars. I think it would be awesome if he developed red. I don't think chams change color based on what you feed them though. Maybe someone can enlighten me on that...
Click to expand...

I was informed to try dusting my crickets with the 'super pig' as it's formulated to enhance red and blue pigments. It's apparently commonly used with birds, some reptiles, and some fish.
So I've started using it for my cham and curly tailed.

melric said:
Storm had red bars. I think it would be awesome if he developed red. I don't think chams change color based on what you feed them though. Maybe someone can enlighten me on that...
Click to expand...

my guy change some coo colors getting his first hornworms
M

I guess I mean with color enhancers Ace. Haha. You'll have to keep us posted if it starts working.

melric said:
I guess I mean with color enhancers Ace. Haha. You'll have to us posted if it starts working.
Click to expand...

My therapist told me not to talk about it.

^LOLOLOL! that just made my day! I have been humped by my male veiled before.. It was terrifying. First a dog, now a chameleon?! What has this world come to!?!

if they r like many other animals he was trying to be doninant, like when a dog does it

haha hilarious!!..well ive never been mounted by my chams, but i did have an adult male jacksons joust my hand once ( it was in a very relaxed way, it was really cool)..and soo i jousted him back for a minute and let him back my hand up (like as if he was winning) ..after that he was all big and displayed how "rad" he was the rest of the day..lol

Ace said:
they can imo....stimulates them

my guy change some coo colors getting his first hornworms
Click to expand...

Haha, Dingo did it again!! Again to my bf. He didn't turn black like that last time, but a little thingy did come out from his poopshoot. XD Gross!

Meet the newest member to the club, now named "Casanove" and my girlfriend Amber. 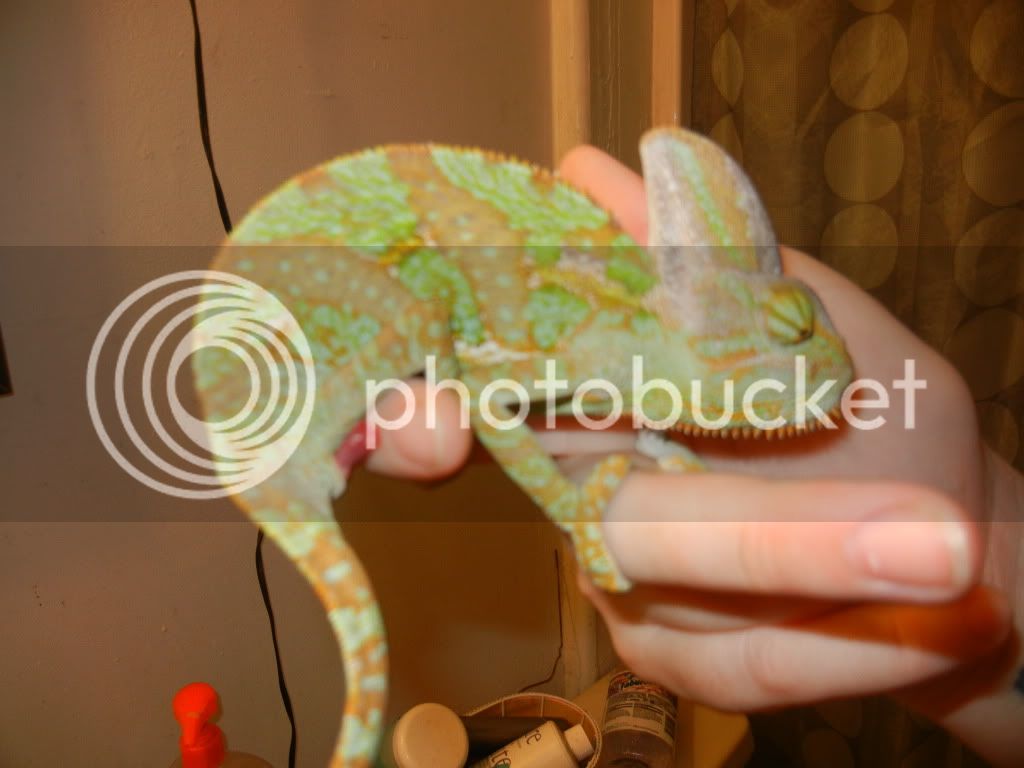 My veiled is just over 10 months old. My boyfriend and I are very active with him, but now the time spent with him has shortened because he seems to be a horny cham. Since last summer every time we take him out of his enclosure the first thing he will do is turn a vibrant green and then hump whoever is holding him. It has gotten to the point where my boyfriend gets nevous when he takes Pascal out because he claims that he doesn't like being "raped!" Not sure what to do or how to stop him from doing it. Suggestions?
You must log in or register to reply here.

Gaping towards mist and urate questions
2

S
I bought my "boy" back in August when "he" would have been about a couple of months old. However I'm now inclined to believe my he is a she....