I never did one of these, and I feel as if I should have rather then barge into the forums asking for help without letting anybody know about myself. This site has been of great help and possibly saved me from grief as I was following directions for an adult Cham rather than a young baby. So Here goes:

My name is Ryan. I live in San Antonio, Texas and I'm a government firefighter an an Air Force Base. I did 6 years of active duty service as a firefighter in Northeast Lousiana, was deployed to Iraq two time in those 6 years. Previously married, I was divorced in 2008 which in turn forced me out of my military career so I could move to San Antonio near my family for help as i got full custody of all three of my children, ages 8, 6, and 5 (two boys are the oldest and daughter is youngest but acts 15). I decided to get a chameleon because I've always been fascinated with reptiles. living in Turkey during the Gulf War (military brat) I used to chase lizards around the neighborhood when I was 10/11 years old. Never been afraid of snakes or any other reptile for that matter. I was never sure that Chameleons were such a hot item as a house "pet" until recently looking up information on them after visiting a Snake Farm. Thats when I googled different chameleon species and came across the LLL advertisement for their Baby Veiled Chameleon Package and was determined to get it. I struggled for 2 weeks waiting for my tax returns before making the purchase because I knew I would shop for the little guy like I did when I first found out my ex-wife was pregnant. Sure enough, nearly 700$ later, Waldo is happy and comfortable in his new home. Now I'm planning bigger and better things for him, with an enclosure project, hopefully not costing more than 150$ and a few cases of beer, beginning this weekend. Now for my Chameleon info...

Your Chameleon - Veiled, Male, Roughly 2 months old (seller says they ship around 4 weeks old and I've had him for 3 weeks.

Handling - Twice, I know better then to try and hold him, I handled him once when I received him to put him in his new home and one day I reached in the cage to clean some droppings and he walked upon my hand as if it were a branch. Other then that I only get near him when cleaning or dropping food inside.

Feeding - At the moment I'm feeding him 1/4" crickets, some vary in size and may be as big as 1/2" and some 3/4" but he doesnt go for the bigger ones and I try to remove them. 20 Crickets enter the enclosure a day and usually about 5-6 are left uneaten or hidden. The days I am home (I work 24 hours a day) I feed him 2 times a day, dropping 10 crickets in a feeder cup early day and 10 more near the evening. I was free roaming but I have so much foliage that many of them manage to hide and Waldo was eating the necessary amount (I think he is smaller then he should be and for that reason). I'm gut loading the crickets with a small amount of Fluckers High Calcium cricket diet, with some Kale, Collard Greens, Apples, and Oranges in the mix. Majority of the gut load coming from the fresh fruits and vegetables.

Supplements - The crickets are dusted twice a week with Calcium w/D3, twice a month with multivitamins, and the rest of the time with just calcium.

Watering - I have a Monsoon Mister RS400 (2 nozzles) misting directly into two different bundles of foliage, the Mister turns on at 7am and off at 7pm misting every 2 hours for 1 minute. Water droplets cover the cage except for Waldo's main basking area, I am still looking into getting a dripper, just not sure how to place it on the mesh top screen without weighing it down.

History - No health history at all. he has made a little clicking noise often that stopped about a week ago and I have once noticed a bubble from his mouth which doesnt happen anymore.

Lighting - I use a regular household 60 watt bulb for his basking, I use an Exo Terra 18" Repti Glo 5.0 UVB Bulb for his UVB. His basking light is about 10" about his favorite basking spot with greenery near in case he wants to go higher or lower. It is placed on the left side of his cage. His UVB is sitting on the top of the enclosure covering a majority of the middle/right side of his cage. All lights are on a timer, set to turn off at 7pm and on at 7am.

Temperature - Basking temperature is regulated with a thermometer to maintain 83.4 degrees. Lowest area of cage keeps steady at 73.5 degrees, while the upper portion of the cage is at 74.5, all daytime temps. At night, the lights turn off with the mister due to a timer (7am to 7pm they are running). Night temperatures drop 10 degrees, 63 at the lower and 64-65 in the upper. Humidity ranges from 53% in the lower part of the enclosure to 60% in the upper. All humidity is maintained with the Monsoon Mister.

Plants - No live plants, just fake greenery, some fake vines, and some drift wood along with a decorative Ram skull. No substrate, but 2 layers of Exo Terra flooring with a towel underneath the enclosure that gets replaces 2x a month. Drainage system is in the plans for new enclosure.

Placement - The cage is not located in an extremely high traffic area, most of the traffic stays a good 6 feet away from the enclosure, but the enclosure is located in the back of a living room with full view of the living room and kitchen. No vents nearby, a ceiling fan but never in use. I do have three kids who are incredibly curious about him and do approach the cage about 5 times a day, I do my best to tell them to be quiet and stay clear of the cage.

Location - Located in South Texas, San Antonio, where the summer temperatures top 100 degrees and the winter temperatures range anywhere from 10 (this passed winter) to 40 degrees.

My most recent pictures: 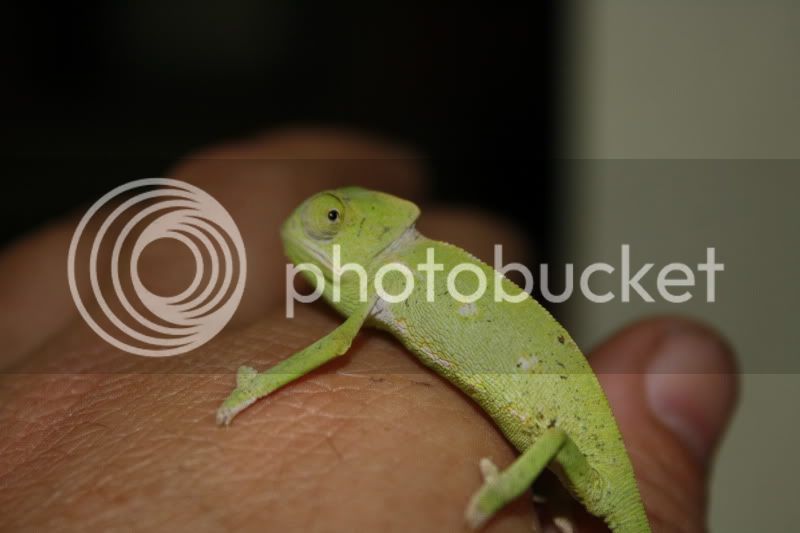 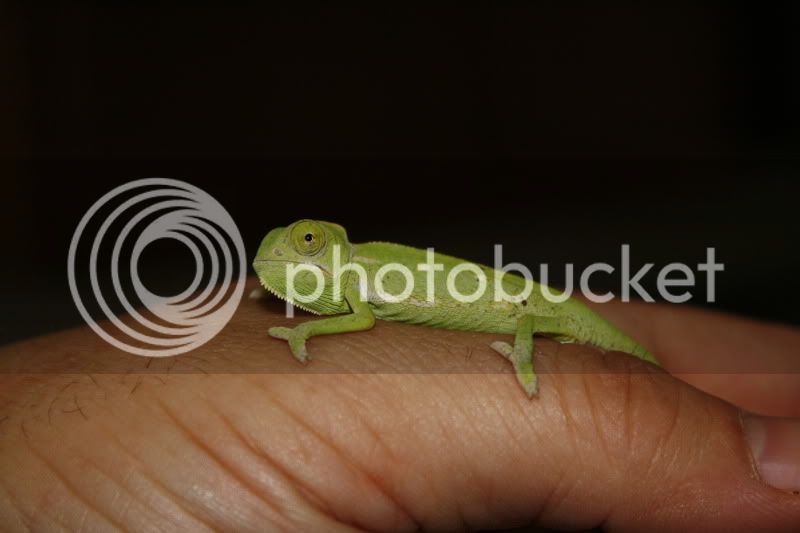 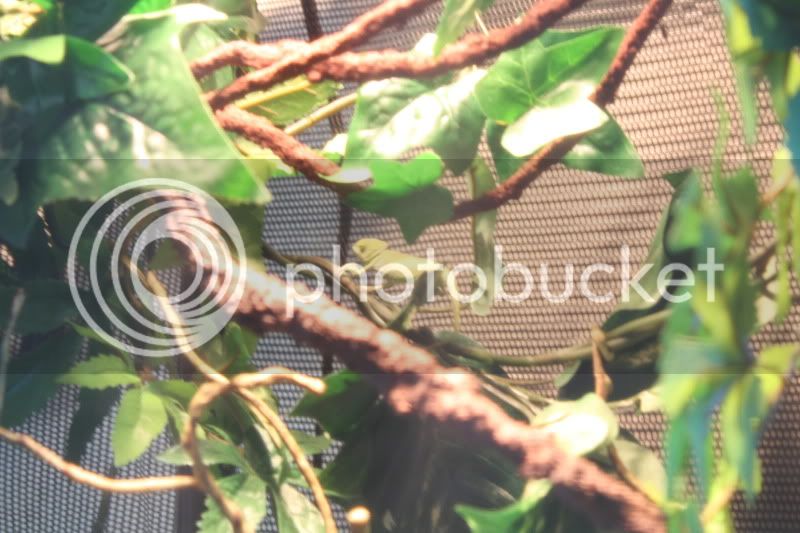 Exploration of new home few days after receiving him 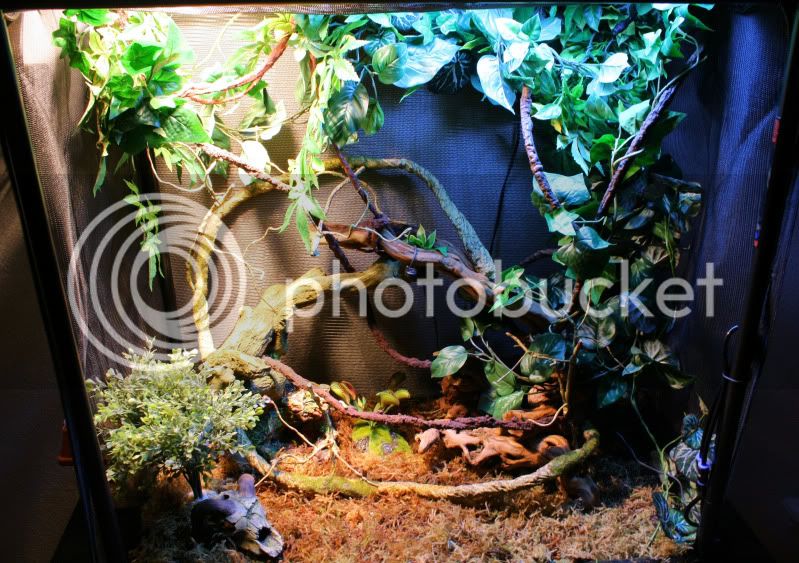 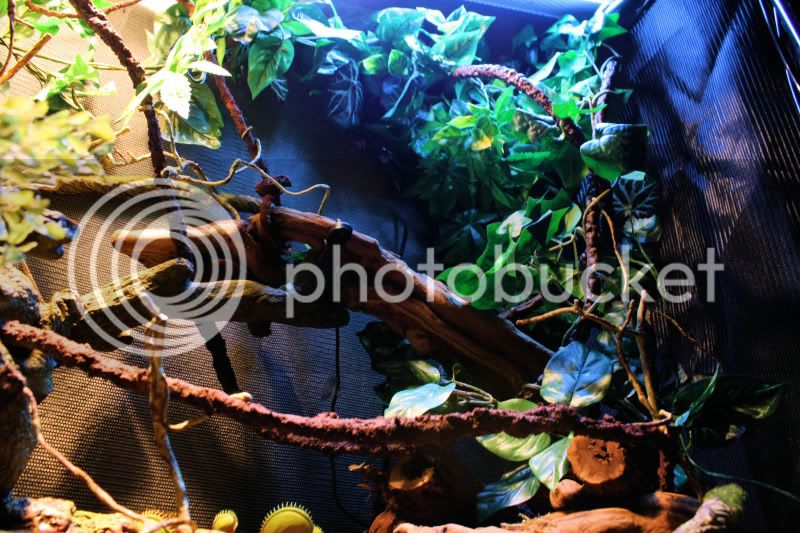 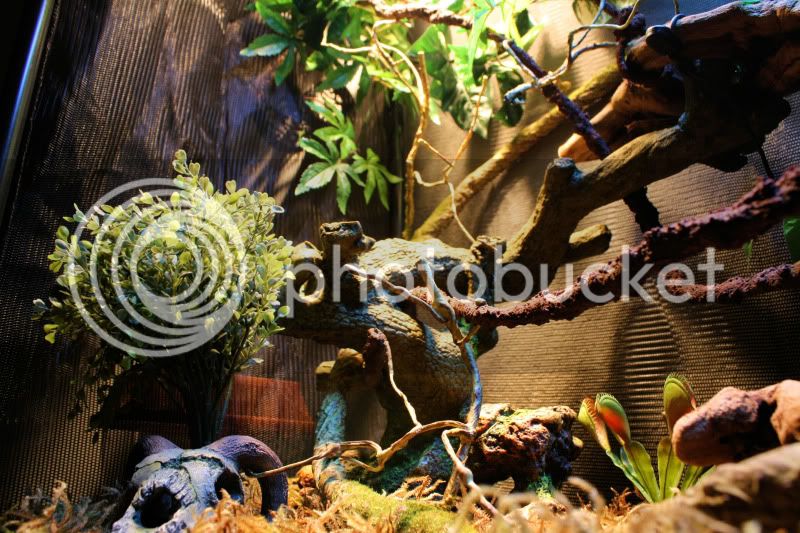 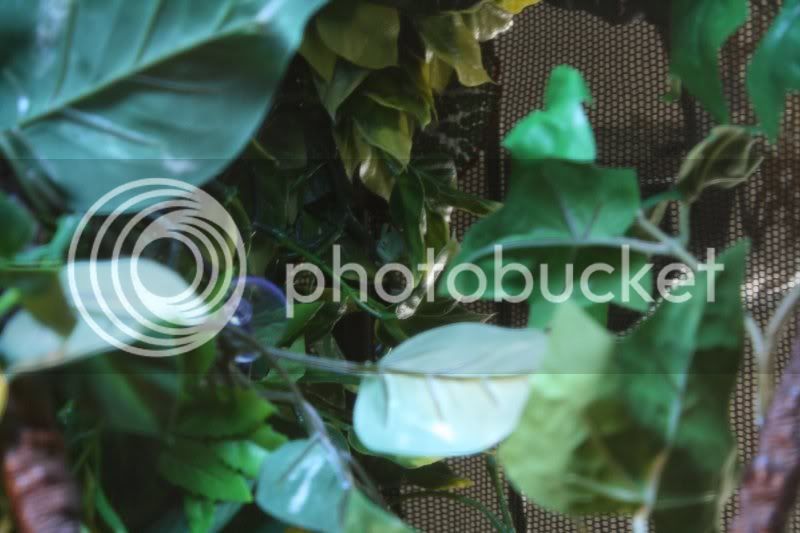 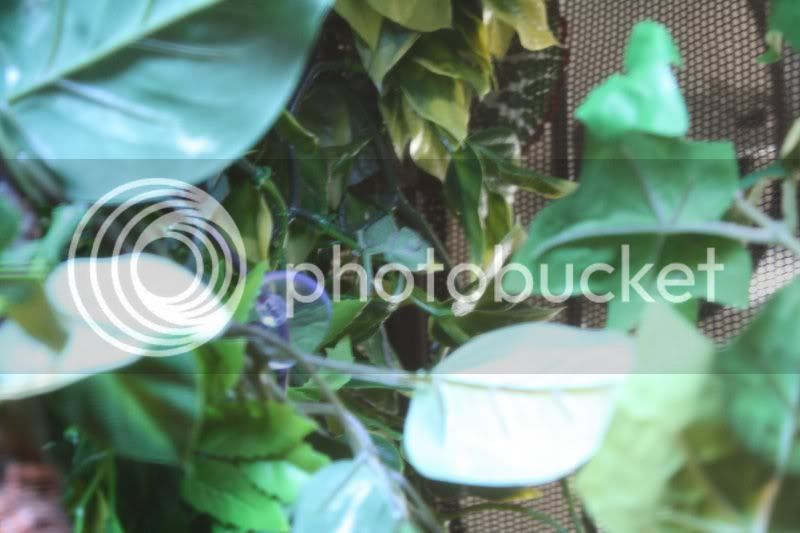 That is an awesome enclosure! just the substrate should definitely be avoided in order to prevent bacterial build up (I read you removed it).
other than that, its a very nice set up!

Where'd you get the sticks or wood you have? I want to make something like that for my 14 month old veiled.

I used all that came with the veiled cham package I bought, figured the moss was included it was okay, until I posted on here a problem and pics and was told to rid of it quickly. i did, it takes away from a lot of the look, but for a happy healthy cham, thats a sacrifice I'm definitely willing to make. Little did I know, about 75% of the feeder crickets I put in to free roam buried themselves in it....and here I thought my little guy was eating well when he couldnt find the damned things!

most of what I bought came from PetSmart, the driftwood, brown vines, skull, and mini tree trunk all did. A pack of foliage came with the cham package I purchased and the rest was from PetSmart. The fake tiny tree and the fake venus fly trap along with the white moss looking vine with smaller vines attached came from a local pet store called Polly's Pet Shop

On the picture of the cham on ur hand, i see a black speck on his left side.. Was that dirt, or is could it be something else?

My first cham was a Senegal Chameleon, which i bought from a local store (wont do that again), and he had something similar to that, just in more places. I thought it may have been a scab or something. But I did my research and they were parasites. He died 2 months after i purchased it.

I doubt it is dirt, not really dirt or dirty in his cage. he's had the spots since I received him at 4 weeks old on Feb 24th 2011. He was guaranteed a healthy cham on arrival and 3 days after. I sure hope its nothing

Maybe he can shed it off. If not, get a fecal done just to make sure.

Will definitely look into that. Wouldnt happen to know the cause of the parasites in the first place? Do they just come...or is it a husbandry mistake that affected his health to cause them?

Don't know, really. Since he is still a baby, maybe his defense mechanism isnt up to par. possible stress lowered his defenses as in humans, and parasites got to him. maybe its something else.

All I know is that when I purchased my 2 veileds neither had anything like that. Now, over a year after I got them, they are doing great.

Just keep your eye on it.

G'day Ryan, welcome, nice to meet you mate.
Re the dots I wouldnt freak out about it, you certainly haven't had the lizard long enough for husbandry issues to be the cause.
cheers

Welcome to the forum, thats a cool set up .......I went to basic training at Lackland in the summer of "81" man the summers are brutal there. Good luck with your new buddy! Appreciate your prior service to the country! Salute!
You must log in or register to reply here.