Hello I talk to some of you yesterday getting my enclosure setup of my juvenile melleri. He is doing really good. He is a really thirsty little guy. He drinks about every hour. But he is having problems catching crickets. I will hold on by the leg for him and he eats it but can't seem to get any buy himself. I was going to run in to the pet store and get some meal worms or other kind of worm, but wasn't sure what Meller's liked the best. I also wasn't sure how to feed him worms. Would I have to hold them for him too? I was hoping to get something figured out so he can feed himself whenever he's hungry. Thanks again.

Staff member
You could try cup feeding to see if he can catch crickets and worms easier that way for a while. You'll need an opaque cup hung low in the cage so he can see into it easily, or else he won't figure it out. I've attached a pic of my cup for my veiled who lost the ability to shoot his tongue. Since he can't shoot he just dives down into it, but yours may just sit at the top and shoot down into the cup. The cup was clear so he tried to eat through it at first, which could lead to injury if he actually shoots his tongue at it, so I painted the outside. Make sure you start off with it very low, and secure it to something so if he tries to sit on it for a better angle it won't tip over. Any kind of cup/dish will work if the bugs can't escape it. 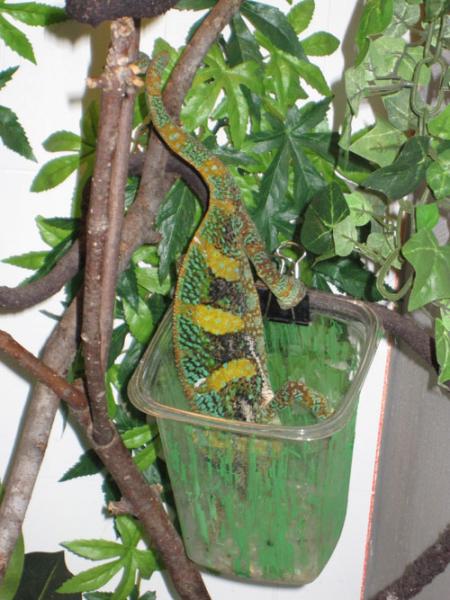 If you want to get worms use superworms instead of mealworms. Mealworms are high in fat and chitin and don't contain much nutrition. Superworms are better, but butterworms, hornworms, silkworms, and waxworms are much better. Those usually have to be ordered through.
Last edited by a moderator: Nov 16, 2015

If it can shoot its tongue, I recommend using a tub rather than a cup so he still has the opportunity to hunt.

Thanks so much. He is eatting out of my hand but I know he would probaly rather get them himself. I will see what kind of worms they have to offer. Thanks I didn't know my worms.

pssh said:
If it can shoot its tongue, I recommend using a tub rather than a cup so he still has the opportunity to hunt.
Click to expand...

Yes. He can definetly shoot is tongue. It makes me jump every time I feed him. I don't see me holding bugs for him when he gets bigger.

I'd be careful about letting him eat whenever he wants. You have to be really careful with the growth rate on mellers. If they grow too quickly, it can lead to a lot of problems down the road.

How many super worms should he be eatting at about 12 inches long? How was a wc so I'm not sure of his age. The last two days he has eatten 8 large crickets a day. I don't want to under or over fed him.
E

My mellers is about that size or a little bigger and he eats a dozen adult crickets and a full grown dub roach every other day. He loves the roaches!
Last edited: Feb 21, 2011

I just got back from the local petstore. They only had very small meal worms and crickets. But when I got back he ate a cricket on his own. Maybe he just needed to get adjusted to his surroundings. His tongue is vey fast, but he walks in slow motion compared to my bearded dragon.

Feed as much as he will eat in say, 5-10 minutes. Then remove the food so you know he filled his belly but not so much that it could cause problems.
You must log in or register to reply here.

Espio Wil Not Eat Crickets or Locusts, is this problem long term?

M
I think my Chameleon is sick

Cham not eating for a week please help
2