Still adjusting and tweaking the setup, including feeders...

Naturally, the new cham (name STILL undecided...I'm so indecisive on this it's ridiculous) and I are till setting into routines, still getting details tweaked, and improving the environment.

I have been continuously sealing my reservoir bucket for Mistking with silicon, waiting patiently for it to cure, filling it with water, and seeing yet again another slow drip of water. Before this dang reservoir bucket I thought I was a pretty handy person, but this pain in the butt makes even the smartest person feel real dumb. Anyways, today I decided to go a little nuclear on this since I know this Saturday will be the first day I will be out of the home for most of the day and I NEED the Mistking up and running and on a schedule by then. I completed coated the outside as much as I could (obviously avoiding the tubing hole) and using various tools (a bent bobby pin came in handy) to cover every little nook and cranny. Then I even put a layer on the inside the best I could, although it was extremely difficult to see, especially on the bottom of the bulkhead...so I just kind of did the best I could with the inside and made sure to use a thick beading of silicon.

In the meantime I'm still hand-misting which he obviously still hates. I have been using much warmer water, but hasn't helped yet (expected, but oh well). I've honestly been bad about doing this on a regular schedule, mostly because I'm trying to make sure the enclosure dries out in between, make sure he has enough opportunity to drink, hoping he's cleaning out his eyes and staying healthy, etc. etc. The past few days humidity hasn't been an issue because it's been raining in my area and my room where he is is highly effected by the weather.

Lights have been on timers for a few days now. Love automation!

Today I finally put up my "black out liners" on my curtains to make sure the room does in fact get dark when his lights go out.... I did this because I wasn't sure he was going to sleep when his lights went out because he was mostly in his corner hiding anyway. Of course tonight I went in to put these curtains back up RIGHT when his lights went out and he was actually in the middle of the enclosure, sort of out in the middle on display, but asleep! I was SHOCKED because the window was wide open, my bedroom lights were all still on, but his enclosure lights were off. It was incredible how quickly he got used to his timed lights and how he was already asleep. Also, as I was putting these curtains back up on the rack I was super close to him and his enclosure, he didn't wake at all, so I could actually see him...I should have gotten a dang picture!! ARG! Also (for the love of god don't flame me for this) the curtain rod slipped and bumped his enclosure for a second and he still didn't budge. Oh my! Love love love that deep sleep, haha! If only I could sleep that well!

I've been playing around with different drainage bins for size purposes. Also with the hand-misting I'm really glad I put up shower curtains along my walls AND on the floors so that water catches basically everywhere. I have new floors in my condo and water damage is a real concern, not to mention water leakage down to my neighbors below me...major nightmare waiting to happen. Along with this I've started putting a towel around the back corner to soak up any extra water (it's not a whole lot) and I replace the towel every 2 days. Hopefully the need for this will go away with the Mistking setup, even if I still "spot" hand-mist as he gets older and hopefully enjoys it, haha! #goals

Near future goals:
I'm still tempted to make changes to his vines and plants and such, but I know that's a bad idea since I haven't even had him one week yet. I'm trying to be patient! He'll need to upgrade to a much larger enclosure in just a few months, so I'm trying to focus my energy on thinking about getting that big bad boy ready.

I want to buy a tall big [safe] tree to place in front of his enclosure for him to come out of his cage. This is so he can get in front of the window (already know he likes that...see older posts) and to start attempting any sort of "taming" for the sake of easing overall stress. If I'm going to care for this little guy for years to come eventually I'll need to at least be able to get him on my hands if a vet visit is needed....those are my thoughts... not anything like, "I want to show him off to my family," because well, honestly they couldn't care less.

Crickets:
Ugh. Still getting used to crickets in general. I honestly don't mind insects and bugs in general. I'm not a spider killer. I'm more of a "put him in a cup and set him free" kind of girl. But the jumping around just startles me. I'm so glad I did my research and I put packing tape all around the mesh screen portions as well as a thick layer of it around the top of the bin I have, because it helps tremendously. Still, getting them into my jar for dusting is still an adventure every morning. What a way to wake up, lol. I'm also going to make a second bin since I just purchased a much larger number of pinheads in hopes of getting better at this whole cricket care thing. A lot of established members and veterans on here would be proud of all the gutloading I'm getting into as well. Oh and when I got crickets on Sunday, even though they were small, they were bigger than the first batch I bought by a little bit, so today I moved the bin into my dark closet in hopes that they won't grow as quickly. If I could get a good look at my cham then I could really judge the size, but he hides almost instantly so it's just so hard to judge right now! (Have I mentioned I worry too much...) 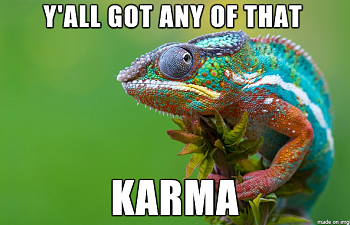 Also bought some hornworms to try for variety. I think dubias might still be too big for my little guy. I don't want to use superworms or waxworms yet because of their fatty content, but maybe it wouldn't be a bad idea? I worry that if I buy a container of them I'll feel inclined to use them before they grow too big or die off, and then spoil my cham real quick. The site I used didn't offer silkworms, so maybe that'll be my next try in variety.