I'm just picking up from part 1. No need to re-introduce everything. For funsies skip to the story above the last picture in this post!

Branches - I got a bundle of sticks/branches from the woods and spent a whole afternoon cleaning them up. I like to take a sharp utility knife and whittle off ALL the knobs. Call me crazy, but usually they're sharp enough to cut my screen enclosure. Sometimes I debark the branches...depends on if it's flaky, decomposing, or looks like there might be bugs under the bark. I do a rinse with very mild soapy water and then rinse A LOT to get it all off. The only reason to let them dry after is to work with them, because they're going to get wet once your mister goes off anyways. I do not bake my branches mostly because they do not fit in any oven I have, haha. Maybe people just avoid bigger branches? I don't get it.

Mistking - I did transfer my Mistking from the old enclosure to the new. This was a major pain in the butt, but obviously necessary and I wasn't going to buy parts that I already owned just because it took a little effort and planning to transfer them. I also have a hand mister that I used during the interim. Somehow the plastic nut keeping the bulkhead (at the nozzle) still had become extremely tight, to the point where I almost broke it and stripped it getting it loose. I have no idea how this happened in so little time, but it did. I even had to cut up the screen of the old cage to get it all free from the old cage in this process. I thought I got lucky and had just enough tubing left from my original Mistking kit to reach from my pump up to the new placement of the nozzle. It does reach. However, initially I had a leak up at the nozzle when the Mistking ran. I had to turn it off, use my hand mister, pull the entire setup away from the corner of the room. Then, I had to get up on my step ladder and trouble-shoot the leak, with not even 1/2'' of slack in my tubing. Eventually I got it all tight and working leak-free. The tubing rattled the cage a lot, so then I fixed it to the cage with some tape (redneck ingenuity right there). All set.

Everything else - I kept the same live plants, but washed them thoroughly (pain in the butt, but necessary). I didn't re-pot them, but I picked any poo/urates off the top, scrubbed any nasty rocks, and rubbed every single leaf individually with isopropyl alcohol. All old vines and fake leafy things went in a diluted bleach solution in my tub for a deep scrub and thorough rinse before going into the new enclosure. I did buy a lot more of the bendy vines and fake leafy things you stick in the cage sides. This time I wasn't going to have things laying flat on the bottom of the cage (i.e. the plants), so I bought some dish stands to rest the plants on. I highly recommend this, and it has been a HUGE game changer for me in terms of keeping the bottom of the cage clean! I can now get my hand around the ENTIRE bottom of the enclosure with paper towels and clean up. I did run out of ceiling space for my dripper, so I installed a ceiling hook to hang it from (see pics).

Feeders - I've been experimenting with different feeders to make sure my little guy gets variety, all while gutloading everything I can. I swear, he eats better than I do. I've given him the obvious crickets, but I've tried different sizes. It's true what they say - he definitely enjoys the bigger crickets more. I'll put superworms, dubia roaches, and hornworms in his feeder cup as well. He might not eat these right away, but eventually he usually eats them. The dubia roaches he seems to dislike the most (they barely move and are still smallish) and sometimes they get left in over night. Even the superworms he doesn't love (my weirdo!). He does seem to like hornworms (not love), but he likes them better if I put them on a vine or the sides of the cage somewhere else, go figure. Also a note on dubia roaches.... a lot of research said they do not stink... LIES. Maybe I've gotten used to the cricket smell (not even that bad since I have a homemade bin), but the roaches and their bin smell AWFUL and I hate them. They don't seem to eat yet they're growing and not dying...I can't seem to figure out the roach life. Pepe even dislikes them. I don't even think I'll buy them again because it's been such a sad first attempt. Maybe they just need to be bigger? I'll do my due diligence and keep researching...but so far I'm not enjoying the dubia roach adventure.

It is true what they say about hornworms - those suckers grow FAST. I always have to throw out some over grown hornworms. I can't simply feed Pepe lots of hornworms before they grow because he over-hydrates. This makes his urates almost pure liquid, and he'd just be getting full on water and won't eat the other bugs full of nutrients.

The move - I did lots of research on this, and didn't find the peace of mind I was looking for. I even reached out to a few people for advice. This was stressful for me and Pepe. I have pics you'll see below...or in the first post... but I set both cages side by side with doors open/unattached and hoped he would be curious and crawl in. I was pretty confident this would work because he was definitely ready for the cage upgrade at around 5-6 months old. He was pacing his cage a lot, and his size definitely told me he was ready for the upgraded size. I had a vine or branch to bridge the two cages. Within 5 minutes he was in the new enclosure and I was so excited. He's shy, though, and as soon as I came over to try to remove the old cage, he immediately crawled back into it. So I backed off again to try again. This time when he crawled out, he was walking on the outside of his old cage, NOT in the new cage, and walking up towards the top of his old cage...towards the really hot light fixtures! I start panicking at this point because dummy is going to burn himself and then we're both going to be in a world of trouble. With an extra stick, I try to place it so he'll climb on to it and I can guide him in the new cage. For the first time in my care, he hisses and definitely startles me, haha. He climbs further back into the corner of this room. I back off, still hoping he'll go back into the new cage, just making sure he doesn't go near those hot lights. Sure enough, given enough time, he goes into the new enclosure... into a back corner of it. This gives me enough time to remove the old cage, reposition the new cage, put the door back on the new cage, and put his new lights on! PHEW! This whole time everything is getting tangled in electrical cords and those Mistking hoses. What a mess. I kind of wish someone was there to get pictures, but also thank god someone was not.

What a stressful few months for both of us, but ultimately a success. I definitely call it a success since we avoided burns. He did hiss at me and hid from me for days after the move. Still, I call it a success because the entire time he's been under my care he has had his appetite, and every single day I've had him he has eaten plenty. Also after the cage upgrade his resting colors are much brighter, happier-looking. He doesn't pace as much, although he still paces a little bit. I think this is mostly because he's around 7ish months old, in those prime juvi stages, maybe he's even getting those hormones...oh goodness, oh and to avoid the evil mister. Bottom line though, Pepe looks like he's doing great in his new home, he looks super healthy, and he's definitely curious about me, though still timid. I may never get to hold him, but I'll always be patient and never force him. I love being a cham momma and this has been one amazing adventure so far.

Cage transfer time! I don't even know where Pepe was when I took this picture. He might even be on the outside of the old cage, back in the corner of the room at this point. It's like an advanced version of where's waldo. 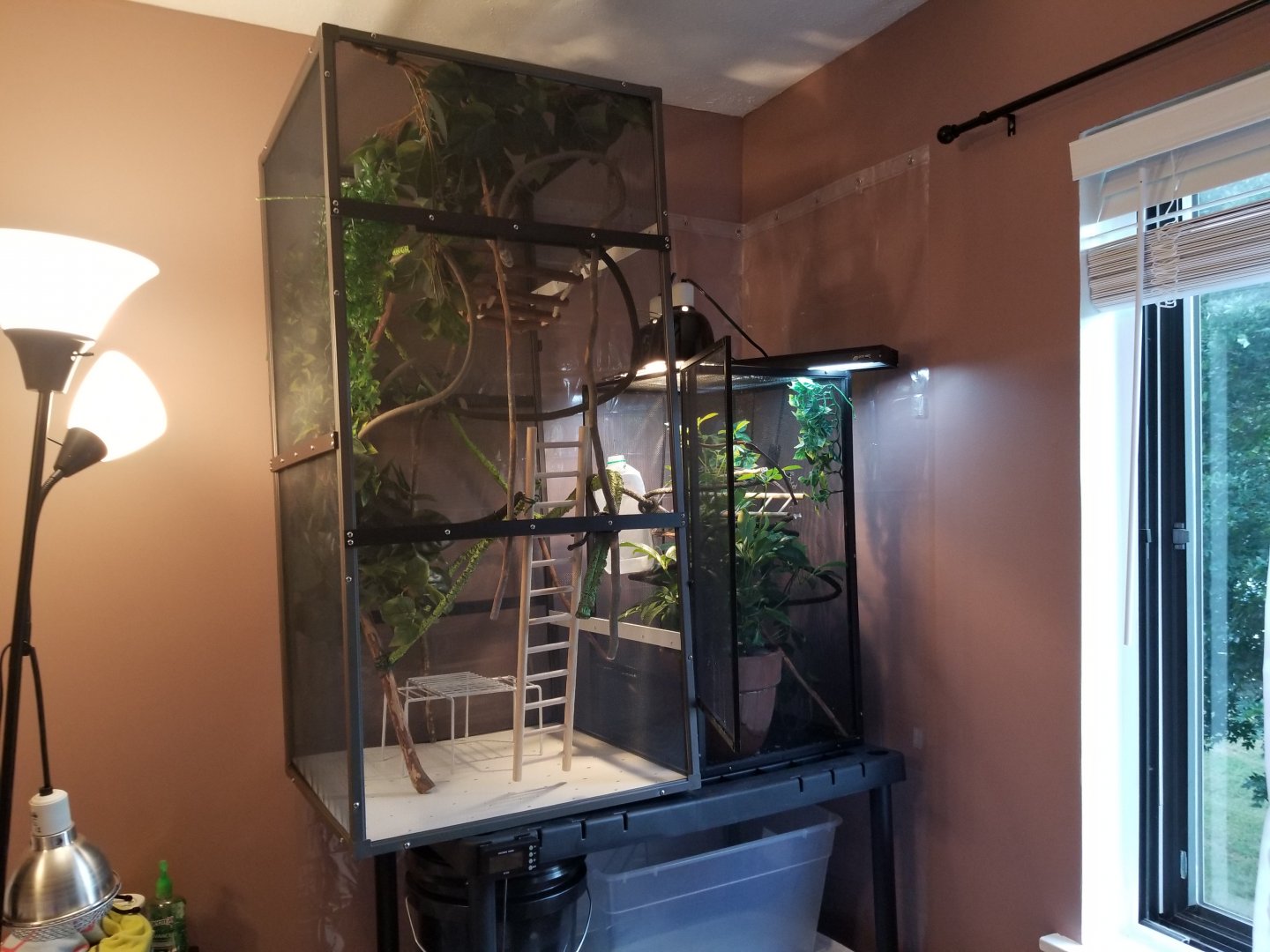 His new favorite hangout spot, under his UVB lights. I was worried about him burning his casque. This light heats up the enclosure frame to a max of 85 ish degrees, but the front of his casque was looking greyish...never black (you can kind of see it here, but not well). I did some more research and kept monitoring it closely and I truly think it's just his colors maturing and not a burn at this point in time. I keep monitoring it though because I am a paranoid cham momma afterall. 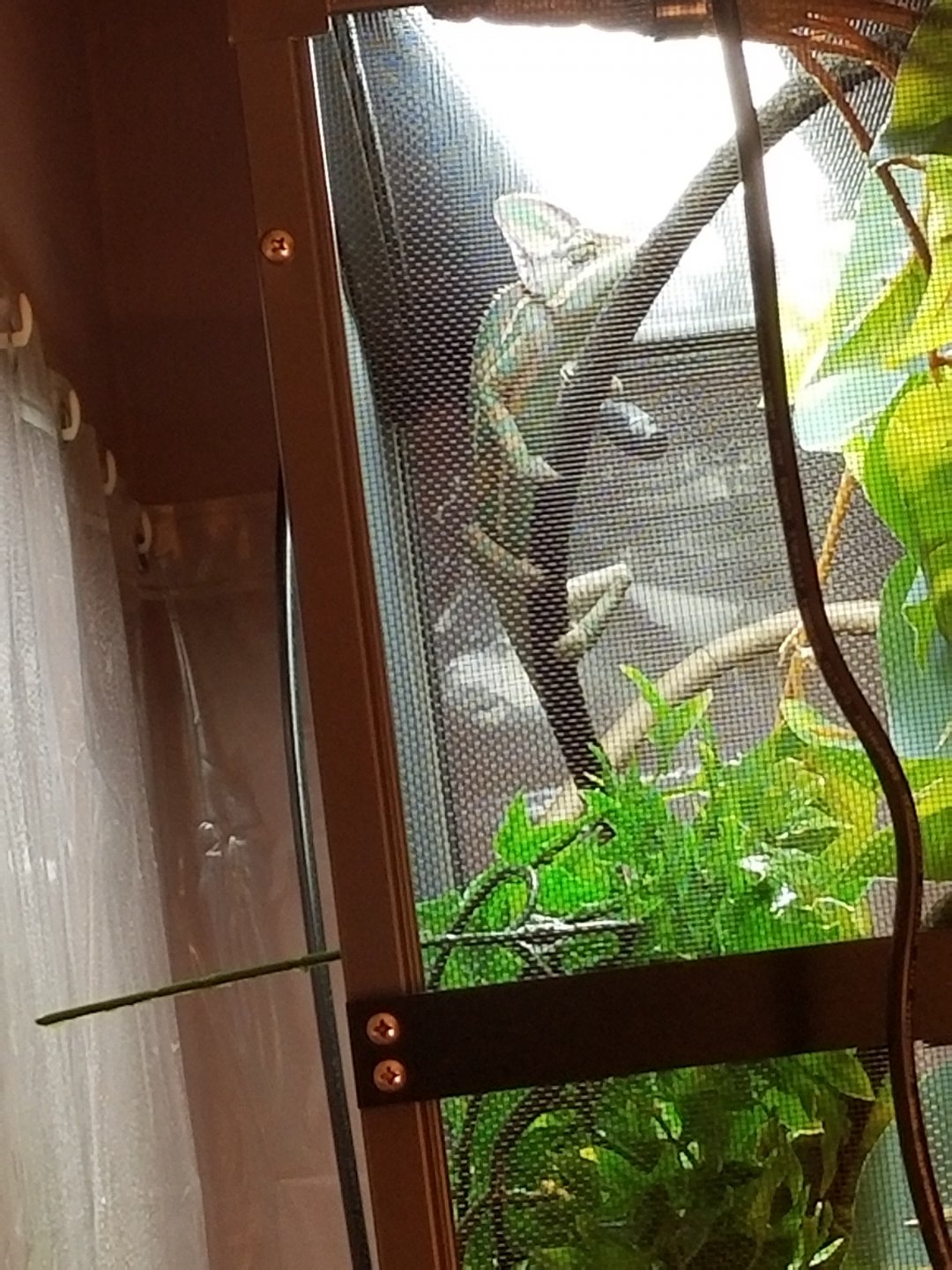 Front view of that new favorite hangout spot, super zoomed in cuz I have the door open and whatnot. I took this today and I think he might be due for a shed soon. He's been growing quick, and looks duller in this pic, but in person too. Can't wait to clean up after the first shed in the new cage. 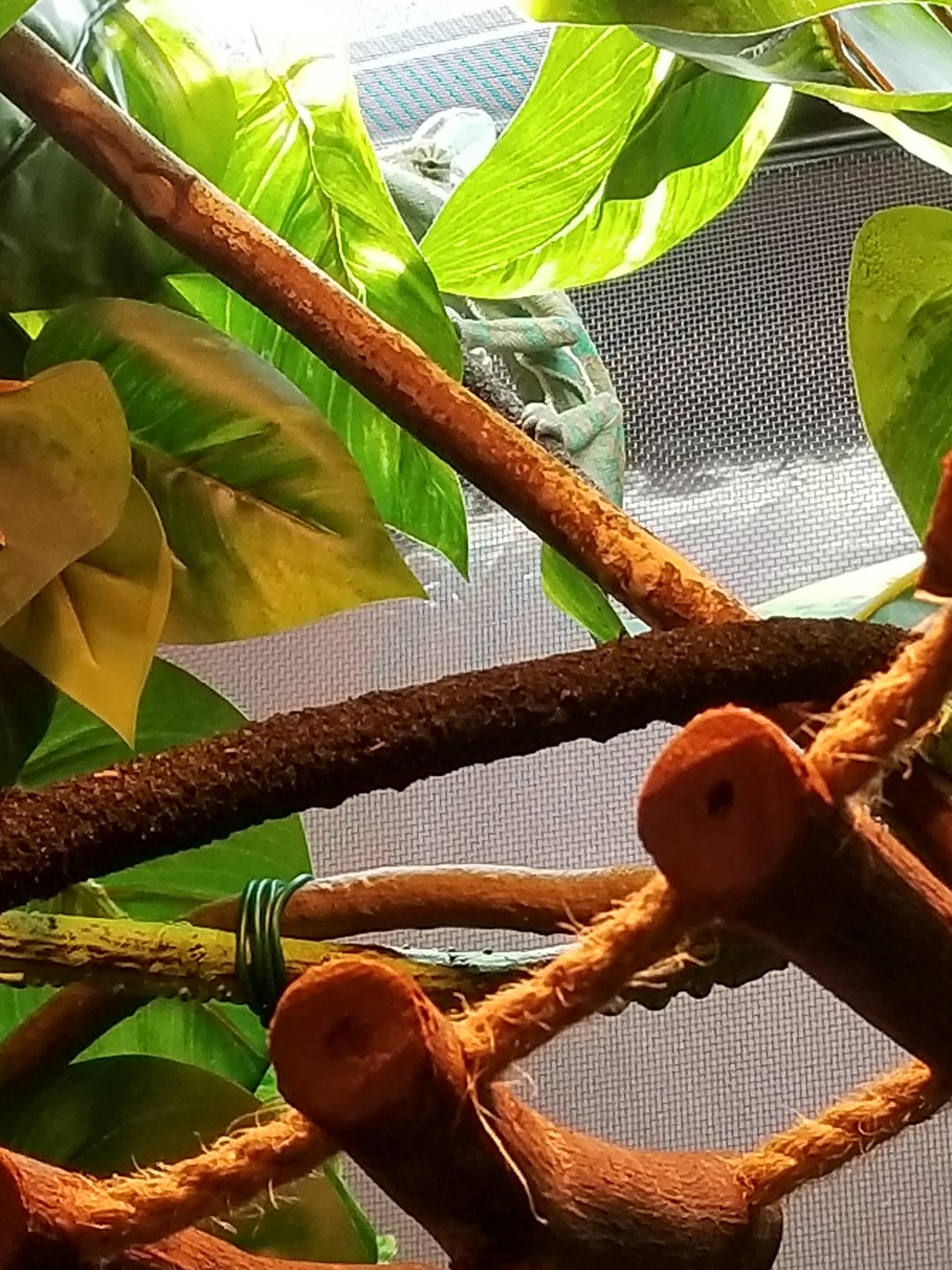 New favorite hangout spot = new favorite sleeping spot. I also think he likes to sleep here because he knows it's hard to get pictures of him. That booger. 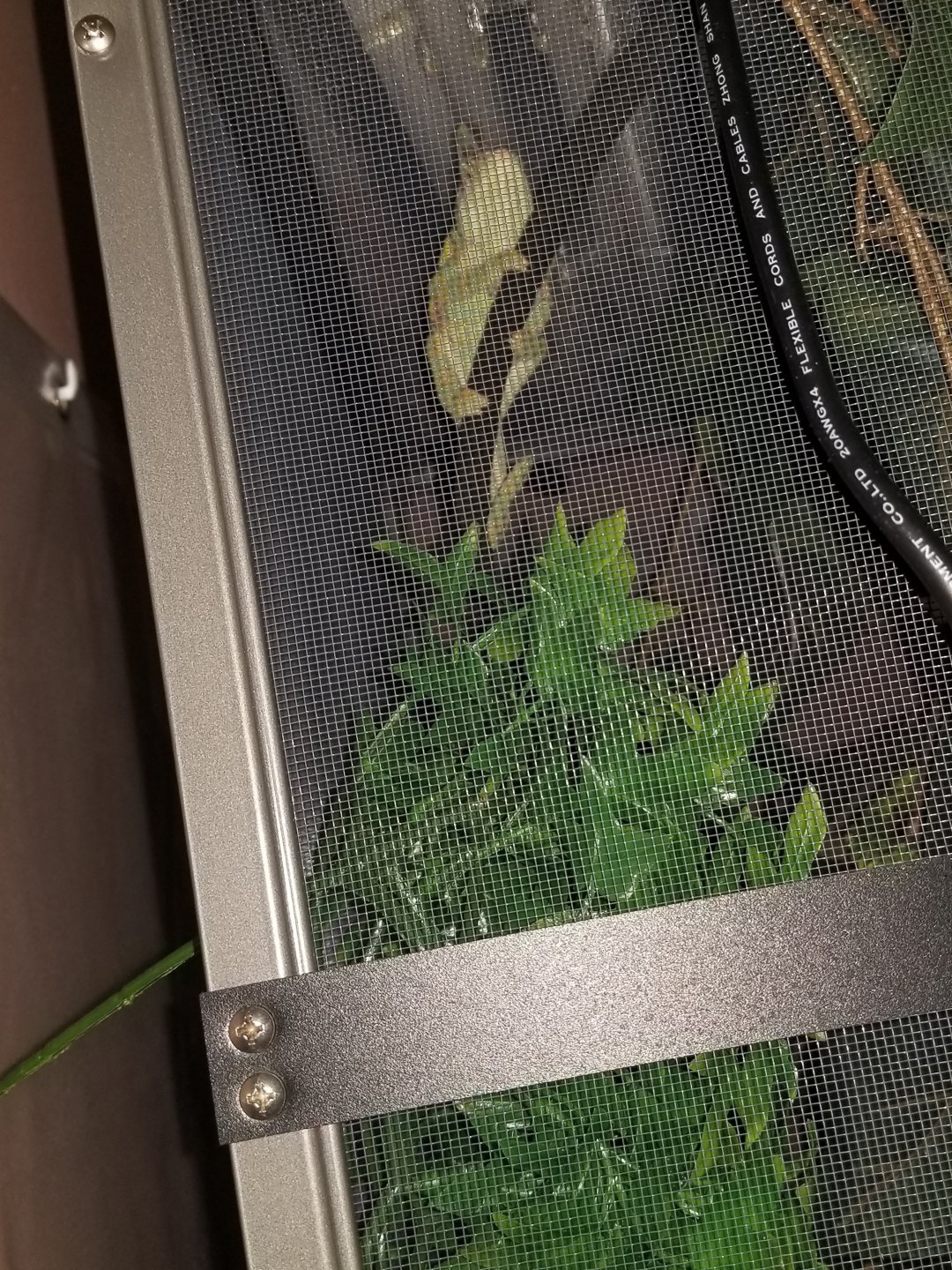 And if I haven't made it clear yet...Pepe pretty much owns a half of my bedroom. I own a condo and rent out some of the extra bedrooms, so I'd rather keep everything in my room. I don't trust other people and I don't really trust Pepe, hahaha. One day my mom came over to meet Pepe and see the whole setup and routine in case I ever need her to feed him in an emergency situation. (YOU KNOW...like car crash and I'm in the hospital for months....have we established yet that I'm paranoid?) When she saw the green paper covering the mirror on the antique wardrobe she acted like I killed one of my sisters and started ripping the paper off in fury and confusion. "No mom! He'll think he sees another male and get all defensive and stressed out and go crazy!" "Whatever Allie. How do I feed the little f**ker?" 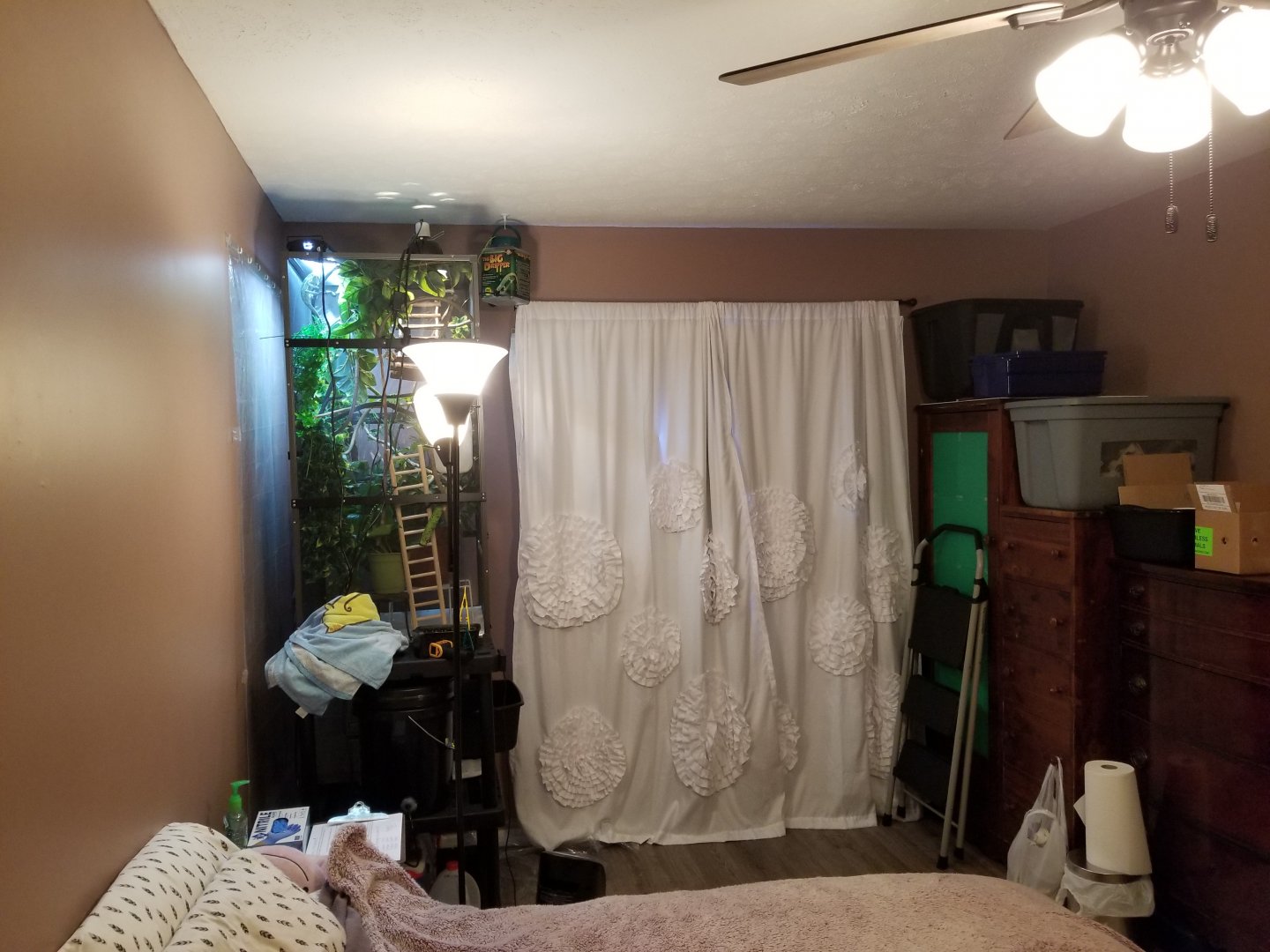