A few times I've left the door to his enclosure open while I sit about 5 feet away, facing away, but occasionally turning to check to make sure he wasn't trying to escape or make a dramatic fall or anything like that...especially when the mistking kicks in and he HATES it. When I do this he is still extremely hesitant to come out of hiding and out into his basking spot. Maybe this is because his basking spot is up front near the entrance and the door of the enclosure. Maybe he thinks I'm going to grab him out. I've been extra cautious to never ever put my hand above him to give him reason to think I'd ever grab him from up top...not that he gives me much of a chance to get close anyways haha.

I leave the door to the enclosure closed, but slowly get closer to the cage, looking away, to see if he will stay out front in his basking spot. He doesn't run and hide as fast as he used to, but he still at some point decides he doesn't like me being near him, and he will find a good hiding spot. His colors also darken slightly when he notices my presence in the room at all. He doesn't turn super dark so I haven't been super worried about it. From my research it seems natural for him to have a little mild stress while he gets used to being around me. Also I have noticed he gets darker when I wear darker colors, so I try to wear brighter, cham friendly colors.

He doesn't seem bothered when I'm doing my thing, putting clothes away on the opposite side of the room, about 10-15 feet away from him, and this is progress from the first week. So like the title of this post, baby steps.

I'd be lying if I didn't admit I'm jealous of people who say they've been able to make progress faster in this process of building trust. Some people are able to handle their cham instantly and I haven't held mine at all. Maybe I am ready to try to start hand feeding, but I just don't see how it's possible at the moment. If I open the door to the enclosure he hides somewhere really thick and I simply can't get near him. The last thing I want to do is chase him around the cage with a bug in tweezers that I'm probably going to drop anyways. I also don't want anyone to get the wrong impression. My end game here is not so I can hold Pepe all the time. I got a chameleon with full understanding that they are more of a pet to watch than to hold and "play" with. I love that about chameleons, because I love my space too, haha. However, I do want Pepe to simply feel safe and comfortable in his home. I want him to know I'm not a predator, that I'm his food source, and that I am a safe animal to be around as well. I really just want what's best for him.

On a similar note, I have logistical concerns. I worry that if he ever needs a vet visit then I'll need to be able to get him out of his enclosure with as little stress as possible. I'll also need to upgrade to a larger enclosure in just a few months, which is honestly more of a priority at the moment. Also at 4 weeks I'd love to get in and already clean his enclosure really well, although again, not sure that's possible at the moment with Pepe's stress levels around me.

I know other people have a large tree plant that they allow their cham to free range onto while they do these types of chores, but I'm really scared that if I let Pepe out onto something less controlled like this, and then get near him, his stress is going to be really high as soon as I take his enclosure away to clean, AND his stress is going to be high when I'm near him...enough that he will probably make a run for it and end up in a worse situation. A chase around my room sounds like the absolute worst thing for him.

Obvious baby steps moving forward include continuing some of the same things I'm doing, getting the tall tree plant, trying to hand feed, etc. I keep reminding myself that I've only had him 4 weeks and it takes time.

I love getting pics of him sleeping because 1. it's easy (he doesn't run and hide lol), 2. he's bright green from the total relaxed state, and 3. he's so cute and almost always in this plant up front in the enclosure. I also attached a few pics of his funny juvi acrobatics. I promise he looks darker in the pic than he really was in person, but he's always a little darkened by my presence and of course the camera.

Until next time,
Allie 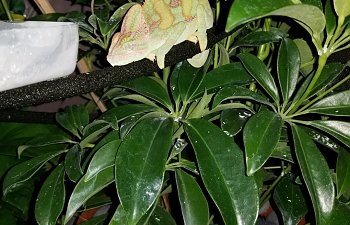 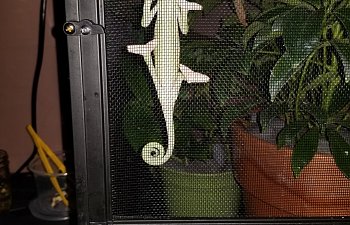 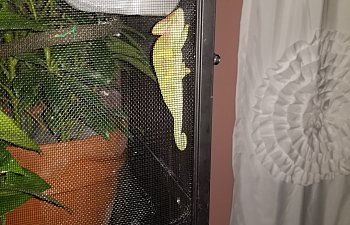 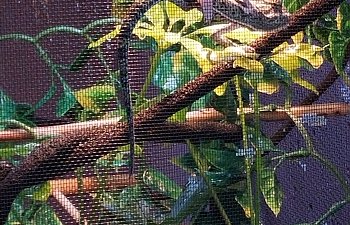 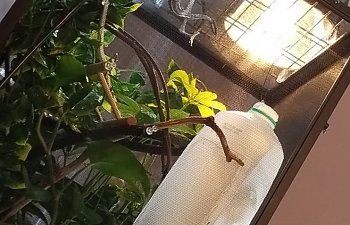 I loved reading this Because I have a Panther Cham, it's usually easier to earn their trust and keep it and yet it seemed like an incredibly slow process for me. One thing I would suggest though once he gets used to you being near the open cage, just put your hand a little inside. far away from him and close to the bottom of the enclosure just so that he gets used to you being in his space in a way that he sees is non threatening

Cobalt145 said:
I loved reading this Because I have a Panther Cham, it's usually easier to earn their trust and keep it and yet it seemed like an incredibly slow process for me. One thing I would suggest though once he gets used to you being near the open cage, just put your hand a little inside. far away from him and close to the bottom of the enclosure just so that he gets used to you being in his space in a way that he sees is non threatening
Click to expand...

Thank you! I've read lots of similar advice, and it is so hard being patient, especially since I'm in the room SO much and he still seems threatened by me. That's just their nature though and I'm working on it slowly, haha. I also think he's almost ready for a larger enclosure so getting ready for that may or may not help, but either way it's almost time, haha.
You must log in or register to reply here.
view our sponsors