I have a baby panther that is around 4 months now that has a ring of shed that has turned the very tip of his tail black. I have tried to remove the shed but have not been able to without really digging at it. I am not sure if it is too late at this point but wanted to see what anyone else would do in this case. He is the only baby out of 21 in this clutch that had this problem. The pic is not the clearest but its the only one I have at the moment. I wil try and get a better one tomorrow.
Last edited: Jun 3, 2012

Brian i am not well versed in this but it looks like it is starting to squeeze off the blood supply. I would think it may fall off. i am sorry.

It might fall off or need to be removed... I had an issue with one of my melleri. He had crickets chewing on his tail... it wouldn't heal... I ended up trying a glue bandage to keep the crickets out of it....... well.. it worked, but then did what your shed is doing to your cham, cut off the flow. The little guy had to have that part of his tail removed. BUT.... he was growing pretty slow and after the tail was removed he seemed to grow better. He is still a bit behind... but I think he was a runt of the clutch. Either way he is a very good eater and very active and healthy.

Just after the bit was removed: 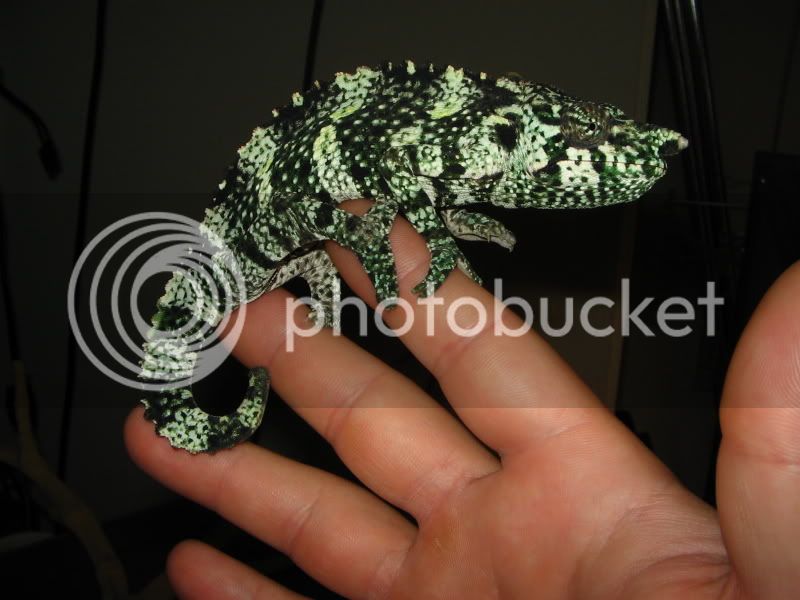 Not too long ago... he gets along pretty well without the whole length of his tail. 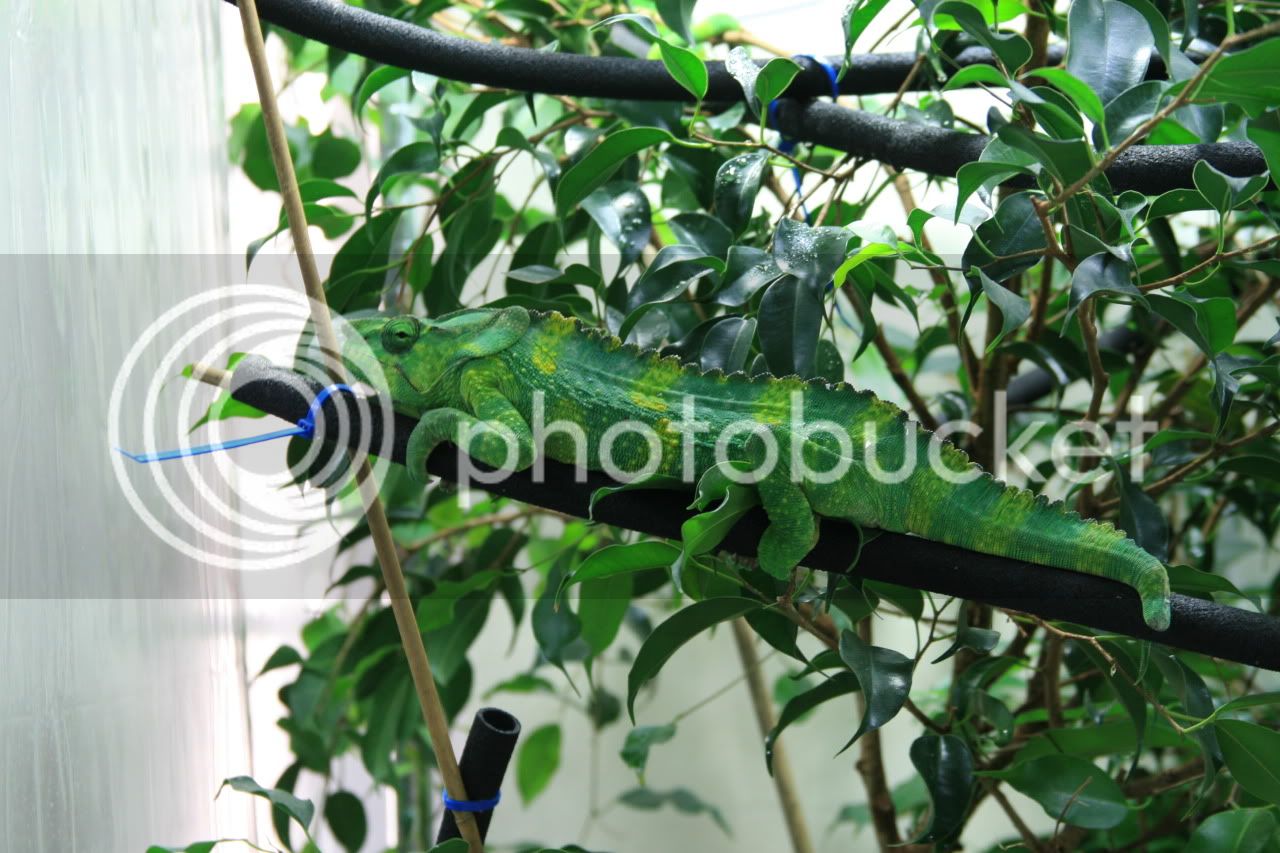 So, experts with experience...should he just try to get that bit of shed off?

That's what I would do but I don't always do the right thing. To me, it seems like the only hope for saving the tip.

Having said that, lacking a tail tip is not at all fatal as Summoner has illustrated.

Elizadolots said:
So, experts with experience...should he just try to get that bit of shed off?

That's what I would do but I don't always do the right thing. To me, it seems like the only hope for saving the tip.

Having said that, lacking a tail tip is not at all fatal as Summoner has illustrated.
Click to expand...

I say try and remove the skin if you can... try a sharp knife and steady hand if you trust yourself.... or pick at it... if it's dead already, it'll end up falling off. Personally I'd go to a vet and have them cut the end off. That first photo of Chris is the day after he had his tail removed. My vet used this clear medical tape to hold the skin in folds and there was no blood at all. He did the removal in minutes.

I had a baby Ambanja that had a tail that looked the exact same way yours does. I believe one of his clutch mates bite the tip of his tail right after hatching in the incubating bin. Eventually, the tip of my boys tail turned black and fell off. Now he just has a little nip missing. He is now over a year and doing very well, so it wasn't a health concern. However, a vet can make a clean cut for your guy, so it heals nicely.

Thanks for the replies. I am having a really hard time digging into that tiny piece of skin so I think I may have to run him to the vet next week and get them to either remove the skin or clip it off cleanly. Too bad too because this guy is really looking good. He is more blue than any of his clutch mates. I can see a flash of yellow on his ribs when he is upset.
Last edited: Jun 3, 2012
K

I know this post is very old but, I had the same issue. I had to take my Conan to the vet to have his tail amputated. Its good to take him to the vet and keep and eye on his humidity and water intake. They put Conan on antibiotics for a month to make sure there were not any bacteria in his system due to his tail. It's pretty much Tail Rot. The shed of the skin closed the blood flow to his tail which in return, killed the tip of his tail. It's best to take him to the vet asap to save as much of the tail as possible since they depend on their tail.

I am curious what the follow up with this was. I hope it all turned out alright!

Mineral/baby oil will help loosen it up if its not too late. I have had this happen a few times with hatchlings of my own and also a cham I bought from a breeder. Sometimes the oil works but when it didnt for me I just applied neosporin to the tip and waited for it to fall off while still providing the neosporin until healed. I never had to go to a vet but it never was real bad. The thing you want to watch out for is spreading further up the tail. If it falls off and or the tail keeps getting black further up the tail its time for a vet.

I know old thread but none of this has been mentioned.

The same thing is happening to my Panther right now. I don't know if I caught it in time. The end of his tail has a black spot but nothing missing yet. He just had a bad shed where the tip of his foot started to rot and I had to have it removed . His foot was healing fine but when I took him back to the vet for a check up a week later I noticed the little black spot near the tip of his tail (there is about 1/4 inch of normal color before the black spot starts). Anyway, it hasn't rotted away yet like his foot did. So the vet gave him an antibiotic shot and told me to keep Neosporin on it. That was 2 days ago. It hasn't gotten better but not worse either. I'm taking him back today for another check up. The vet said it may heal and the color might just look weird in that spot (the skin is definitely dead where the black is), or he said he might lose the tip of his tail. Right now it's just a waiting game. He's doing fine without the tip of his foot, but I already feel terrible enough about that, I don't want him to lose the tip of his tail too . FYI: I take very good care of my chameleon. This was just a fluke. He shed the day before I left for vacation and my aunt watched him for me for 8 days. He is about 8 months and hasn't had any shedding problems yet, so I didn't think to mention to watch out for any stuck skin. I mist his cage a lot throughout the day so I'm thinking the humidity might have been lower than normal while she was watching him and he was trying to get the last bit of his shed off. Always keep an eye all over them after the shed. Everything can be saved if you catch it in time. But if something has to be amputated they seem to adapt. Mine is doing just fine with his partial foot. And from what I've read they can get around just fine with partial tails as well. Hope this helps. Or at least know this stuff does happen no matter how well you take care of them!
You must log in or register to reply here.

Stuck Shed on Tip of Tail