Thinking his body is a branch

Food:
*Gutloaded crickets
*Superworms (stored in a combination of organic rolled oats and whatever bedding they come in from the stores)
*Hornworms (5/month)
*50 silks every 2 months (I get them when I can, but they are so expensive!!)

Dusting:
Please note: it is of my opinion that dusting is not required as often when outdoor time is scheduled regularly! (please read below for the outdoor schedule)
*Dusted with Exo Terra Calcium powder supplement (without D3) 1/week
*Dusted with Zoo Med Repti Calcium with D3 1/month
*I should note that while I don't dust the insects as often, I DO put some of the Exo Terra Cal directly on the gutloaded veggies I give the superworms/crickets, thus passing calcium through the chain

Gutload:
3 items per feeding from this list (of course depends on what insect I’m feeding and what I have in the house… but you get the idea) *fish flakes/cat food is primarily for the breeding crickets
*organic rolled oats, carrots, apples, fish flakes, organic cat food, cat grass (*new item recently – have just been growing it in the cricket’s breeding tub), chard, kale, raw beets, kohlrabi

Cage:
*Cage is located next to my large window, which in the summer time (now) has the window open and fans going approx 2ft from the set up.
*Fans are NOT directed at the cage, but rather the air flow would draw a parallel line to the front of the cage 1ft away (if that makes sense)

Outdoors:
*Outdoor sunshine (on a purple wandering jew) in segments (ranging from 10mins to 30mins) weather permitting adding up to an hour/week.
*Will only go out when there is full or partial sun on my deck.
*Lately temps outside have been 30C-33C (86F+).
*Shade is always available in his plant, and I will mist the plant when he’s out there for longer than 10mins.

Handling:
*He is only handled to transfer locations. Ie: when cage is cleaned (everything taken out and wiped down once/month) or when being taken outside. If he shows any sign of stress, I will skip that day, and try again the next. At no time do I force handling on him. To reduce stress I will not handle him directly out of the cage, instead a bungee cord is used (he is coaxed into climbing on it) and then he can choose to climb on me from there, or stay on the bungee cord. This is especially useful for our going outside routine, because I can then just hang the bungee cord on the plant (if he didn’t want to climb on me) and then he’ll climb into the plant with reduced stress.

The problem:
The past week I have noticed him laying more on his branches. I figured it was my ever-annoying challenge of humidity, so I made sure to come home at lunch and mist more often (4x daily instead of the normal 2x). This showed no improvement. THEN this morning I found him struggling to grab onto a branch! He had a good hold on three “paws” if you will, but his back leg kept grabbing onto his body instead of a branch! With a gentle finger I coaxed his foot towards the branch, and then he did the same with his other back leg! Is this an early sign of MBD?

He has been thriving lately with me taking him outside, and his colors have been the best I have seen since bringing him home! He hasn’t been wanting to go back in his enclosure though after I take him outside – would this be reptile depression? I can’t free range him as I have a cat! (Who, before someone freaks out at me, is only allowed in the room when I am also in the room, and even then, the cat is on the bed, and the cham is in his cage with me standing between them)

I guess I should note I found the largest urate deposit while cleaning yesterday. Kind of ball-parking size here as I didn't even think to take a picture, but it was the length of my pinky finger (female hand) - maybe an inch? and the feces that I found next to it was only about a quarter of the size. The urates were half orange/half white. Which I don't get because plenty of water is constantly offered as described above... but yeah. Worth noting. I misted him quite heavily last night after finding that, and he was tolerating a direct mist (which he NEVER does!). He was drinking straight from this. I'm thinking that his travelling issues have been happening longer than just this morning, he just hasnt let me witness it. Which has limited his travelling to his drip location and the screen where he would normally drink the mist off of.

Pictures (below) are of him this morning, grabbing his body before I corrected him. And the cage set up (which I just finished cleaning/reorganizing yesterday… so not sure if that gives you too much, but all I changed was the position of the plants (I took out a cactus (not sure what type) which wasn’t thriving) and moved the grape vine thing so it was higher (before it was on the floor reaching up, now its on the stool reaching up) 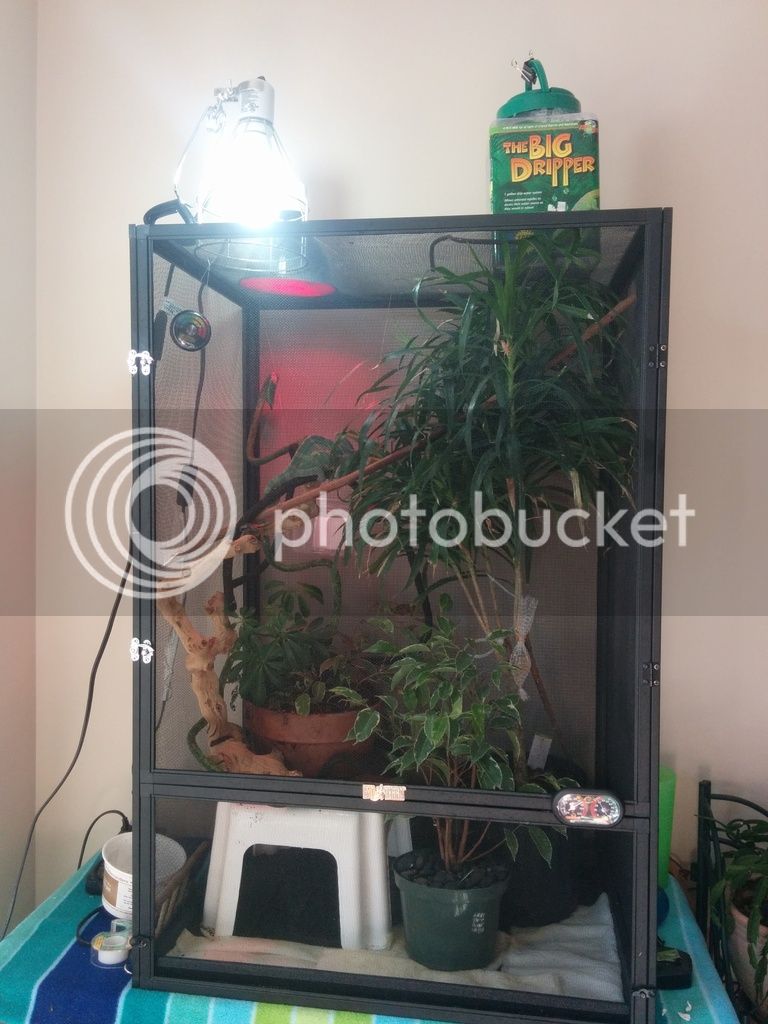 Problem: This picture seriously makes me want to cry... 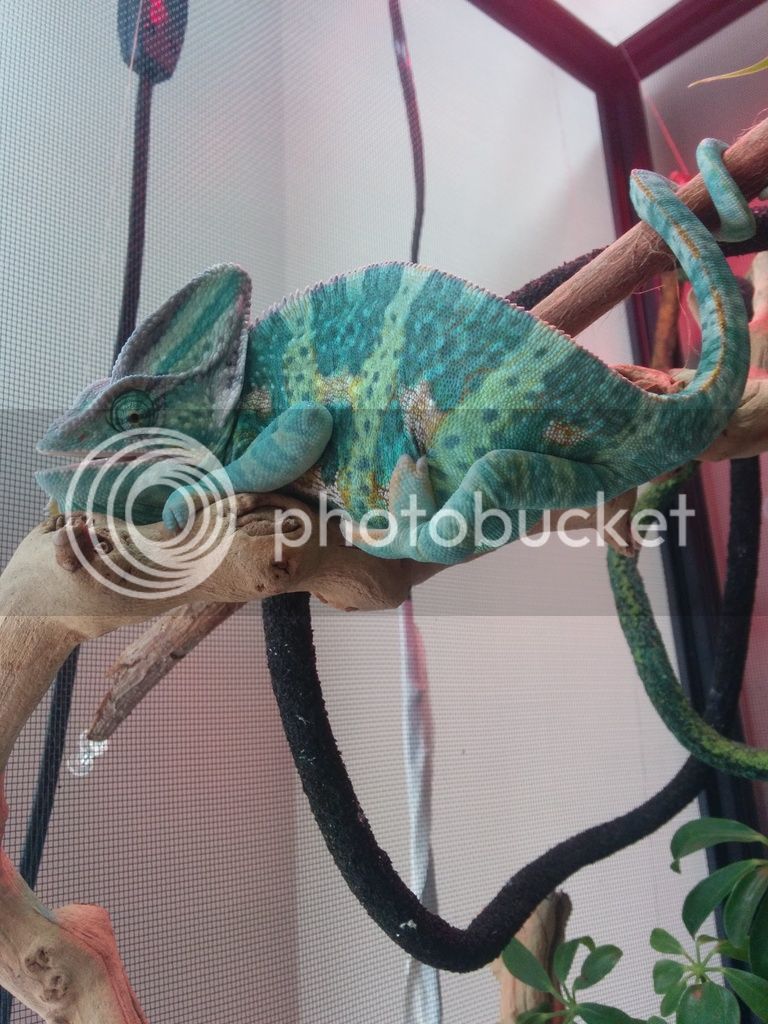 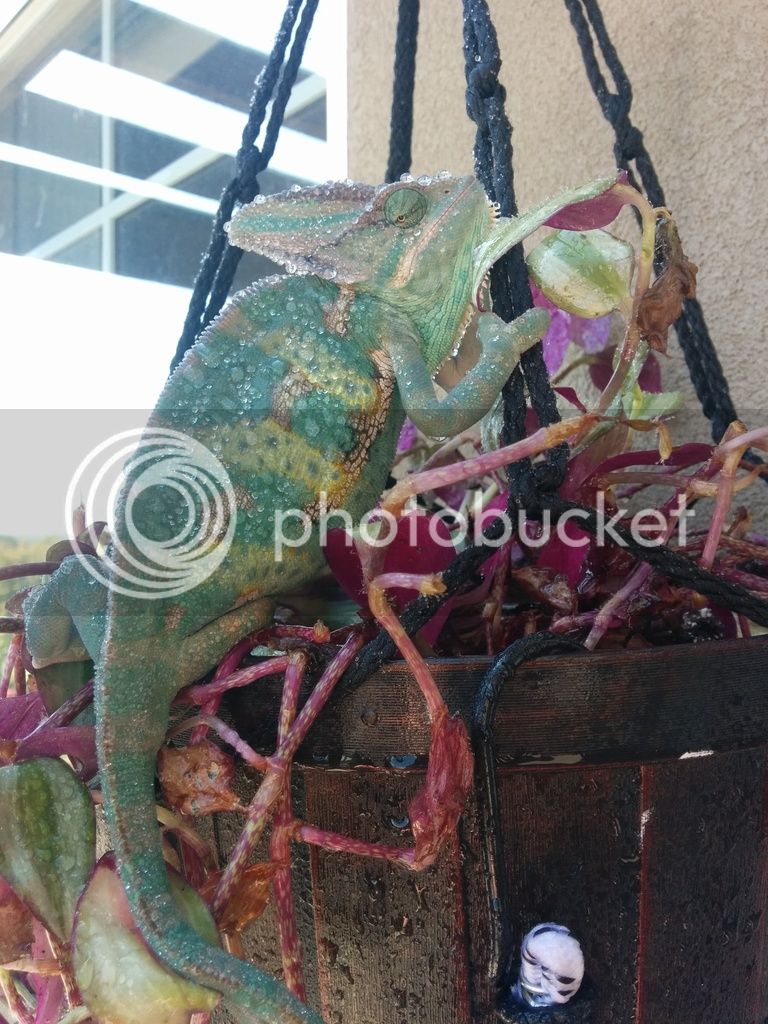 It is my opinion, It appears he is a bit dehydrated. It also seems like mbd.
your supplement schedule is off.
calcium w/o d3 daily,
calcium w/ d3 2 times a month,
multi vitimin 2 times a month
even being outdoors, calcium is required, as most feeders do not have the correct calcium to phosphorous ratios.

agreed with pp you need to dust WAY more often. also it looks like his basking area is too far away from the lights. what exactly is that red light? he needs a 5.0 uvb bulb. neither of those bulbs look like a UVB to me. i would throw out the red bulb and get the right one.

Also are you leaving that red light on at night?

Hey guys, just wanted to update! Following the advice of another group which I also posted on, I've changed out my compact UVB for a UVB strip bulb. I now have a 26" Zoo Med Reptisun 10.0 linear tube (with a reflector in the dome to maximize its output). We found that my compact UVB was not really getting through the metal mesh I have on the enclosure, thus I needed a stronger output, as well as a larger surface area where he could regulate his temp, but not have to sacrifice losing UVB to do it. 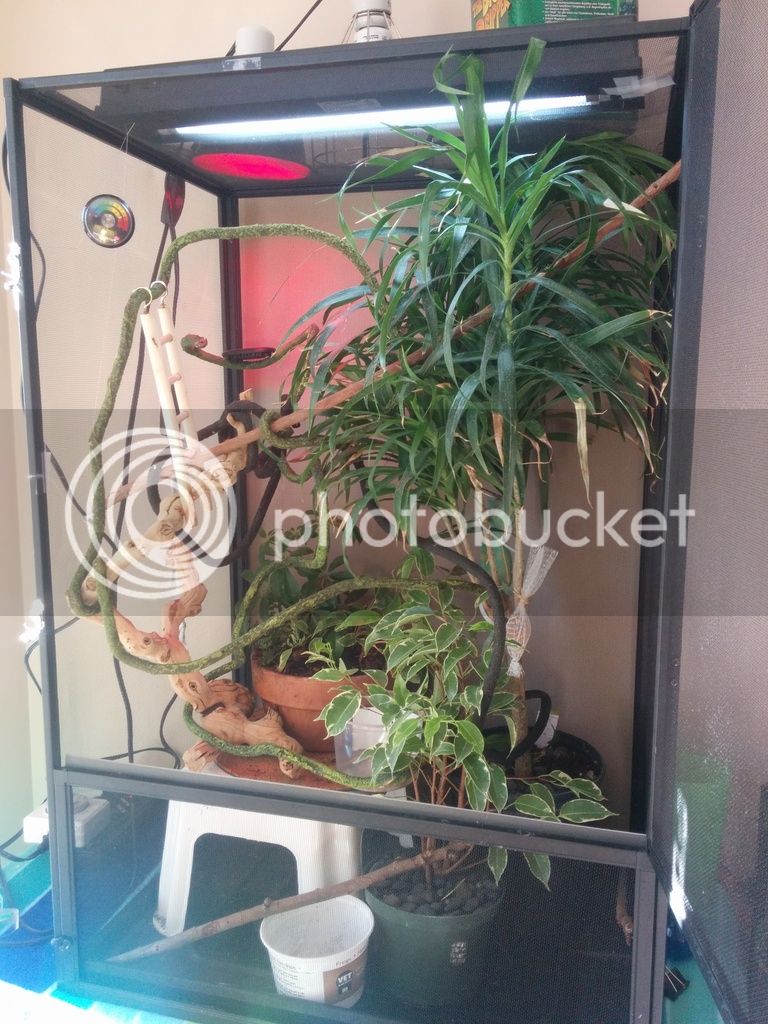 Additionally, I've added Herptivite (Rep-Cal) to the dusting schedule. I've also added a lot more branches to allow access to varying temps and levels of UVB/heat. My basking bulb (the red light - and no it doesn't stay on all night. It is for heat purposes only, thus it is turned off at night for cooler temps) is actually putting out a lot of heat, so I had to lower the branches closest to it, and can raise them again when he gets a bit older!

Already hes begun to move around more. He's still a bit shaky, but has stopped grabbing his stomach, so I'll count this as a step in the right direction! Looking towards a full recovery!
You must log in or register to reply here.

Not going to his sleeping spot before lights go out