I made one today. My regular vet is out of town, and my sister, who is an RN, is inconveniently out of town as well. My female sambava, Shalamar, did something and hurt herself. I checked and fed everyone this morning and she was fine, and then early this afternoon, I was wandering around the cages watching chameleons.. I do that alot.. and saw that she had an injury. She had a dime sized piece of flesh missing from her chest, and her muscle was exposed. She was obviously in some pain, but was still moving around doing her chameleon business. I have to assume that she fell and hit something. She isn't housed with any other chameleon, so it is not a bite.

I seriously considered waiting until tomorrow morning, because I really, really don't like to trust my chameleons to just anyone. But, I was worried about infection making its way into that open wound. So, off to the vet we went. I didn't take a "before" pic.. I was more concerned with getting her stitched up. Here is her poor banged up head.. a couple bruises: 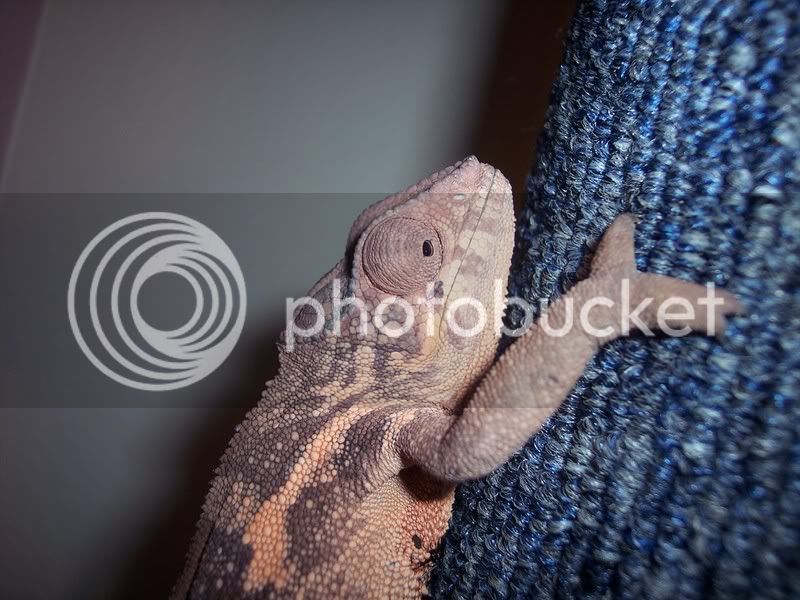 And here are her fancy stitches.. anyone know how long it will take for the wound to heal? 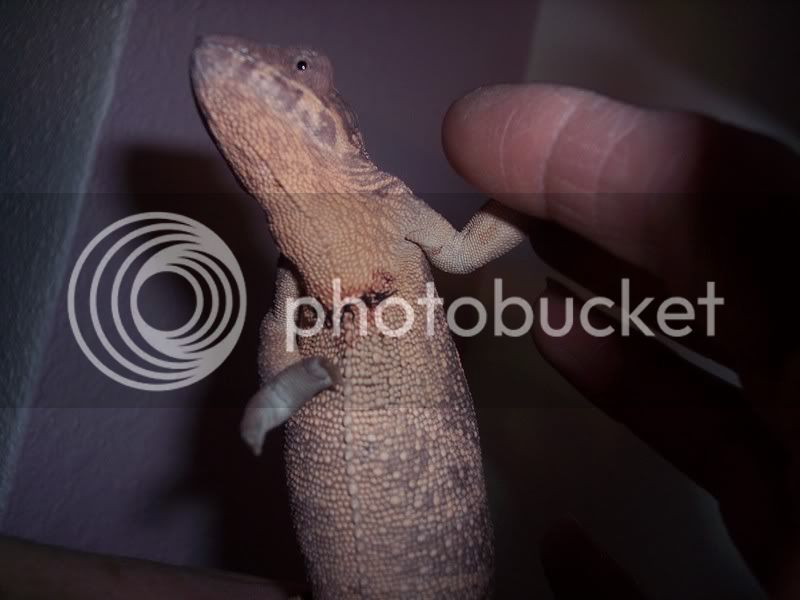 Ouch!! I hope she gets better.

Oh snap! I wonder what happened.

From what I hear about herps, healing takes a long time. I hope she turns out ok!

Wow! poor thing! She must have really gotten hung up on something to rip her skin like that!! Thank goodness you do a lot of chameleon watching! - don;t we all, no matter how many we have (one )

Did you like the vet? Always good to have a backup if s/he was good. Did the vet give you some topical anti-bio to apply? I hope she heals quickly!

OT - is the carpeted thing in the first pic something you use in the cage? Cy has lost some toenails so I am always looking for other things for him to climb on, especially now that his sight is impaired.

Oh the poor baby. She must have been so traumatized by the whole accident and vet visit. I hope no infection sets in.


I haven't a clue.. I have been over the damn cage 10 times now, looking for something to explain that sort of an injury. She is in the only commercially purchased cage I own, a screen 24X24X48 cage that she has lived in for several months. From what my vet said, and also what an experienced keeper said, it will take 6-8 weeks for it to heal.


lele said:
Did you like the vet? Always good to have a backup if s/he was good. Did the vet give you some topical anti-bio to apply? I hope she heals quickly!
Click to expand...


The vet was nice, but had not a clue one about reptiles. Poor Shalamar was actually the first chameleon he and his tech had ever handled. He also made it clear that he would help in a pinch, but was not interested in any more than that. My regular vet thinks that anti-bio goo would be a bad idea at the moment. She is really doing well, the wound looks great. No swelling, no bruising, and no abnormal behavior on her part. I think it helps that I seem to have caught the injury within an hour or so of it happening.


lele said:
OT - is the carpeted thing in the first pic something you use in the cage? Cy has lost some toenails so I am always looking for other things for him to climb on, especially now that his sight is impaired.
Click to expand...


Actually, that is a floor to ceiling cat climbing thingy. My mother was my unwilling assistant in snapping photos, and it was unoccupied at the time. My mother knows that chameleons like to climb up high, and is supporting Shalamar's back legs in that first picture because she is quite determined to climb the pole. She actually had a really hard time holding onto the carpet.


Jewel said:
Oh the poor baby. She must have been so traumatized by the whole accident and vet visit. I hope no infection sets in.
Click to expand...


Argh.. I hope no infection sets in either. As far as trauma goes.. she seemed pretty much ok with everything. This chameleon is another very social panther that doesn't seem to mind much of anything, as long as she isn't gravid. Then, watch out. Don't look at her, don't touch her.. just back away fast...

ohh my poor thing keep it clean and watch it closely, the stiching looks good so does your girl... Im sure she will do fine

Just hope that the stiching isn't cat-gut and that it won't disslove before she completely heals.

Glad you were able to get that attended to before much time passed . That would be one scary moment when first spotted.

If you had any concern about infection, ask your vet if it would be ok to use a squirt of properly diluted Nolvasan. Nolvasan residue, even if rinsed off, will keep many infectious microorganisms under control. Leaving Nolvasan on the wound to dry on its own probably gives even more long-term protection. Nolvasan is a std. vet wound-wash. If you don't have any, remember my trade offer.

Dave Weldon said:
Nolvasan is a std. vet wound-wash. If you don't have any, remember my trade offer.
Click to expand...

Dave, I don't think Heika wants her chameleon to had STD's...

And secondly, I have never heard of anyone wanting to trade STDs with another. Very odd...

Dave Weldon said:
Nolvasan is a std. vet wound-wash. If you don't have any, remember my trade offer.
Click to expand...


Haha! Believe it or not, I just bought a new bottle yesterday while I was waiting for my chameleon to get her stitches. There is a feed store next door to the vet clinic. I am a big fan of nolvosan, but I hadn't considered using it as a topical. I will ask my vet if it looks like it wants to flare up.

Will Hayward said:
Dave, I don't think Heika wants her chameleon to had STD's...

And secondly, I have never heard of anyone wanting to trade STDs with another. Very odd...
Click to expand...

Will Hayward said:
Dave, I don't think Heika wants her chameleon to had STD's...

And secondly, I have never heard of anyone wanting to trade STDs with another. Very odd...
Click to expand...

I mentioned once that I wondered if my "Grandpa" Veiled picked-up parasites when he went out for "stud services". That would make them STP's .

The vet diagnosed the situation and after several rounds of Panacur along with Flagyl and Albon, I think he's finally getting close to being parasite free . I don't know if he picked them up or if the parasites were already there and exploded in population from the stress of having to "perform" .

I am a big fan of nolvosan
Click to expand...

Me too ... expensive stuff though. I use it to clean EVERYTHING and also to clean superficial wounds as well.

Something similar happened to my emale also. I went through my room to admire my chameleons as well, and i saw blood on a cage floor. I looked at the female, and her let was cut a bleeding. I qiuckly grabed her and and wiped the blood off with a Q-tip. then i applied some neosporin. The wound started to swell so i have been using some baytril (as recomended by Jim at chamco.) she is doing good...still using that foot, and acting like nothing happened.

Jeez !! Good luck with all Heika. That's just weird. To not be able to find a sharp edge, or hole or tight spot that she could have gotten caught in .... you are going to have me checking under my bed for the chameleon mutilator !! I wish I could lend you some experience, but I have never had such a situation without easy explanation. Chameleons are notorious for trying to sqeeze through holes in mesh etc, that are too small, and I have lost a few who got hung up in holes in plastic climbing fence where the holes were just too tight, and the were hung up hald way through. But that was plastic, and did not cut skin. If ever you figure it out, let us know please ! Thanks.

Bahh, pretty frustrating. I have removed every bit of manzanita from the cage and resanded it. I also trimmed her ficus to make sure that some of them weren't possibly "pokey" enough to do that. No holes in the screen except for where the misting head pokes through, but it is filled by the misting head. Starting to look over my head for a chameleon mutilator as well.

However she did it.. she looks fine. She is eating great, and seems cheery enough as she goes about her normal chameleon business.

Heika
You must log in or register to reply here.

URI suspected. Exotic vet not available on weekends. None of the emergency vets will see my Cham. Please help.

A
Female Panther Reluctant to Use back leg