Staff member
I am so excited to announce I just found 4 perfect little eggs laid by my very own CB female R. brevicaudatus named Batu. I still have Batu's father Tiberius (wc) though her mother Octavia (wc) passed away about 5 months ago. Batu was of their fourth clutch under my care, I watched her hatch, and she turned a year old last month. I'm a proud mama! Thanks Ataraxia for Batu's mate from the only shipment of pygmies I've seen since Tanzania closed! I have a trio in one viv and a pair in another but they weren't feeling the chemistry at all. I switched two of the females out and suddenly love is in the air! Both males seem much more interested in their current partners and even though Batu didn't get traded something worked. They've been together for a few months but it was only a week or two ago that I noticed she started looking plump, and Saturday I saw the outlines of eggs when she turned. Well yesterday evening she was thin as a twig so today I went and found her clutch! I'm so excited!

Each little egg is exactly 1cm in length. 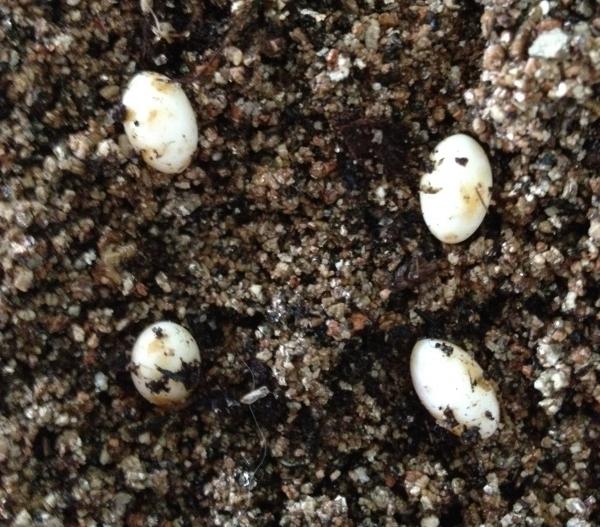 I will be incubating them in moist vermiculite in a sealed container in a downstairs closet that stays in the 72-76 temperature range. Incubation period should be about 2 months.
Last edited by a moderator: Nov 16, 2015

Look at you getting yourself a little dynasty of pygmy chams, congratulations on the eggs
view our sponsors

Staff member
I would LOVE a pygmy dynasty.

Congratulations! I hear it's quite difficult to breed pygs? They are so cute

Staff member
It's much more difficult now that pygmies are impossible to get. :/

I couldn't imagine witnessing such tiny eggs in person. Please keep us updated as these guys progress.

Grats ferret! I just had 4 babies hatch out this Sat They are so cute and tiny.Here a pic of them sleeping The come to the same spot every night to sleep.

Staff member
Babies!! Congrats! I really miss having pyglets so I really hope these eggs hatch!

congradulations to both of you!!!! good to see theres still little pygs out there

opp I posted the out of focus one.

Ferret, that's Awesome! Congrats on the eggs! I wish you a successful incubation and hatch rate!

congrats ferret!! Im glad you finally got your wish.

Oh congratulations!!! What a gorgeous discovery! I thought they'd be smaller... but in my head pygs are thumbnail size...

Congrats ferret and good luck with those little pygmies =)

Wonderful, just wonderful. Lee just found her pgymy eggs and I had to find out how to incubate them. You solved my problem before you ever knew I had one. That is service.

Congrats ferret! Glad to see you had success with them.

Staff member
Me too! Glad I could help Laurie!
M

hi everyone! i bought 3 pygmys 1 male and 2 female about 3 months ago,and just last week i found 2 clutches of eggs!! am SOOOOO excited!!!! the first clutch was 2 and very small,but the second clutch i found were 3 and quite big,so was wondering when do they start to grow? and how much bigger will they get? and do they change colour? The bigger ones have got yellowi marks on them they had them on them when i found them,and because there bigger was wondering how old they could be?! thankyouxx donna
You must log in or register to reply here.
Share:
Facebook Twitter Reddit Pinterest Tumblr WhatsApp Email Link
Top Bottom