Hello to all.
I am somewhat new to this site, but have been lurking for a good while now.
I have a male and a female veiled chameleons who are both well over a year old now...
I've read contradicting information on how to "introduce" one to the other for breeding purposes. I've read that the female should be introduced to the males cage, AND I've also read that the male should be introduced to the females cage. I've tried both, with the same outcome- The female turns dark with bright pastel colors, hisses at him, and tries to ram him with her head in both instances. Needless to say I separated them. One thing that I didn't do was hold the other cham outside of the cage before just throwing them into the habitat. Maybe that could be part of the problem...
The reason I decided that now was a good time to breed is because she layed an infertile clutch of eggs 4-5 months ago, and I've seen her scratching at the bottom of the cage as if to "dig in sand". I believe she already has eggs inside of her and she displays the bright robin egg blue and yellow colors.
My questions are:
If she is already egg bound then is it too late for her to have sperm fertilize them? Is she too far along to be interested in the male?
Is there a way to tell if she is interested in him before I physically put them both together?
I plan on putting a laying box in her cage asap, but I kinda waiting to see if she'd mate first before laying infertile eggs in the box.

Anyone's experience would be of great value to me. 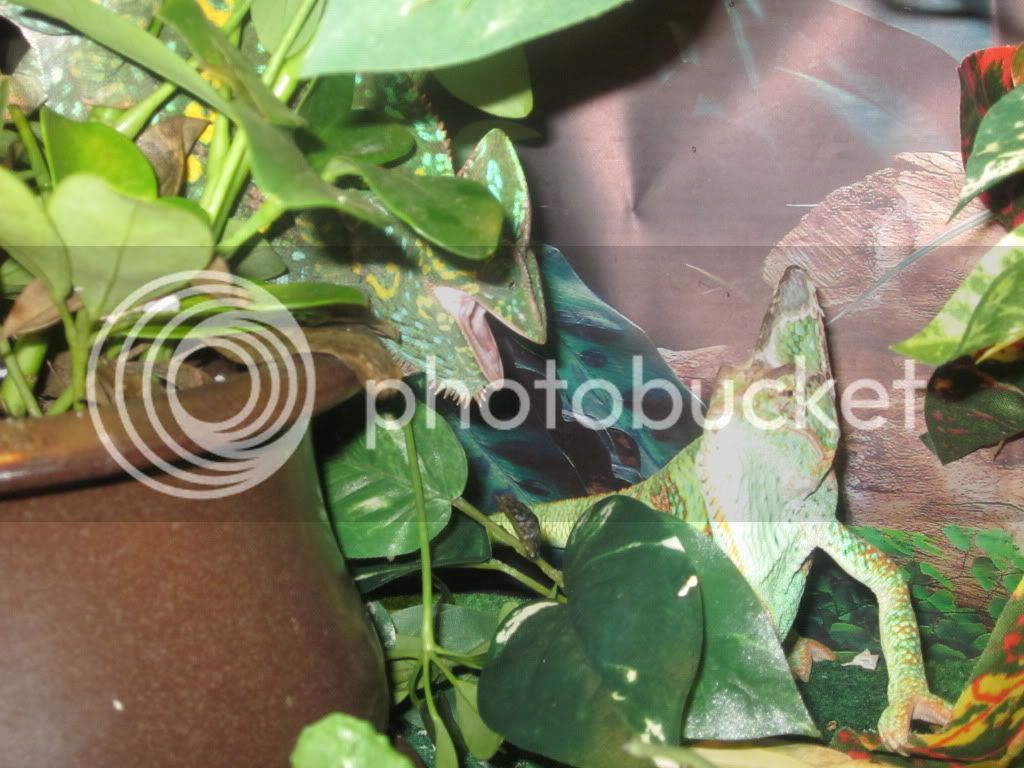 the head butting is a def sign of non receptiveness.

if she is ready to lay now or soon, the eggs cant be fertilized, and would explain why she wont accept the male.


as for introduction, both ways are fine.
K

Whenever the female takes on those colors (dark background, right blue dots) and hisses, rocks back and forth (head butts), etc. it means she is non-receptive/gravid and should not be put in the male's cage. The whole point of holding the female outside the male's cage so they can see each other is to see the reactions and not put her in if she is behaving like I just described so you will not end up with an injured chameleon.

I'm pretty sure the colors she is displaying are to show she already has a clutch of eggs and that she is not wanting to breed. I am by no means an expert I am just going off the info I have come across in my research.

Thank you all for the straight-to-the-point answers.
I had a feeling she just wanted to lay, but couldn't find any definite answers.
I put a 10in. tub filled with damp sand and coco fiber in her cage earlier today. She was digging for a good while.

I am curious to see how many she lays.
K

Don't let her see you watching her when she's digging or in the hole or she will likely abandon it. If it happens often enough it can lead to eggbinding.

Just wanted to share that she laid 43 eggs yesterday, unfertile of course. Thanks for your guys help.

Good for you! Nice to know you and the cham managed this all so well. I hope when my girl's time comes I have as much success!

Submitted for your approval,
Tyg
You must log in or register to reply here.

Feb 16, 2021
kinyonga
K
L
HELP MY FEMALE VEILED CHAM IS LAYING OUTSIDE OF HER LAYING BIN