I've had my male bb ambilobe cham for a couple weeks now. After waiting for well over a week, FLChams finally called me back and confirmed that he was shipped at 6+ months old, not the advertised 4 months. I was a little disappointed that they couldn't provide an estimated hatch date. My 4 month old female is puny compared to him...Alright...getting off topic on my own post....

Anyways, he showed up in the middle of a shed. He has shed everything except his "crown area". It has looked like dry, flaky skin since he's been with me. I have no intentions of removing it, unless absolutely necessary. He is still very skiddish at this point. I tried to take him out of his cage for the first time yesterday so I could clean it, and he wanted nothing to do with it. After watching him stress for a minute or two, as I slowly approached him from underneath, I decided the risk did not outweight the gain. I'll try again next week, his new cage will be completed by then...so he'll HAVE to come out for the move. In the meantime, should I worry about the remaining dry skin?

Though I couldn't get a good pic of his head, here is a full body shot. He's been getting new colors every day it seems. When at rest, he shows lots of white and red. In my opinion, he looks nothing like his advertised sire, who showed NO red or white at all, but I'm not complaining. Genetics are a funny thing. I wonder how much more his colors will change? 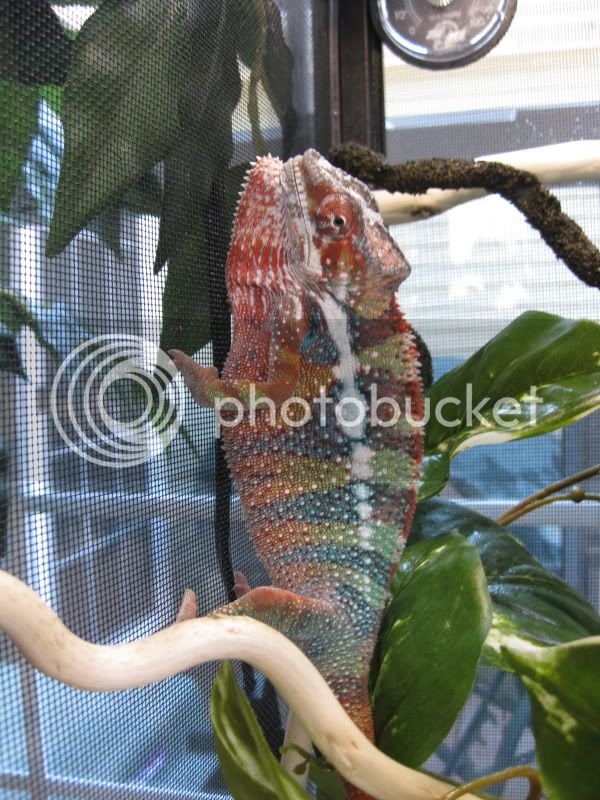