* Your Chameleon - 8 month old Ambanja Panther, male, purchased 1/29/11
* Handling - I have been handling him more lately because of his meds, but rarely before that
* Feeding - 4-6 crickets twice a day, more if he eats them quickly. He will not eat waxworms or mealworms so far. Crickets are fed Flukers cricket feed.
* Supplements - Reptivite with D3 2-3 times a week.
* Watering - Misting 2-4 times per day for several minutes. He usually starts to drink within a minute.
* Fecal Description - Fecals and urates were "normal" brown and white, good consistency, but he hasn't had any that I can see in a few days
* History - He was doing great until we had our furnace replaced in early March. Within 2 days, he had turned gray/brown and hasn't gone back. He's near a heat vent, but is blocked from direct airflow. Maybe coincidence, but seemed odd.

* Cage Type - All screen 16x16x29
* Lighting - 13w Hagen Repti-Glo UVb 10.0 bulb
* Temperature - 85 under lamp to 75-80 at the bottom. Temps are never below 72. There is 1 thermometer near the lamp. Bottom temps checked on occasion.
* Humidity - not sure. meter appears to be broken, buying a new one tomorrow.
* Plants - Plants are synthetic, medium-large leaved vines wrapped around synthetic vines. Coverage is medium density.
* Placement - Cage is in our living room, which is high traffic, but in the corner farthest from all activity. As mentioned above, near a vent but with no direct airflow. Top of cage is 48" from floor
* Location - SW PA (near Pittsburgh)


Leon was doing well until early March, when he started appearing stressed and was often gray/brown, but was still eating and drinking very well. Around 4/10 his eating slowed and he developed an infection in the corner of his mouth. His cheek filled with pus and discolored very quickly. Took him to the vet that day, where it was drained and cleaned. He was given a Baytril injection and prescription plus Betadine for cleansing. I was never able to get the Betadine up into the cheek like the vet but the pus has not recurred. His lip is still misshapen and there's still a dark spot in the corner, but it looks more like a scab than an infection now.

After doing research (and with some past non-cham exp), I did force-feed him a few wax and meal worms on Sat and Sun and saw him eat a cricket Sunday night. It was less "force" than it was putting it in his mouth for him, where he then chewed and swallowed them himself. The top of his head is no longer bulgy, as I've read they should be, but concave. I don't know if that indicates malnourishment or dehydration. I have Pedialyte, but I can't find any reference to the amount to give him.

We are willing to do whatever needs to be done for him, but I feel like we were under-informed by the breeder, like telling us spraying twice a day was enough with no drip system. I just need some help before it's too late.
P

The day we got him: 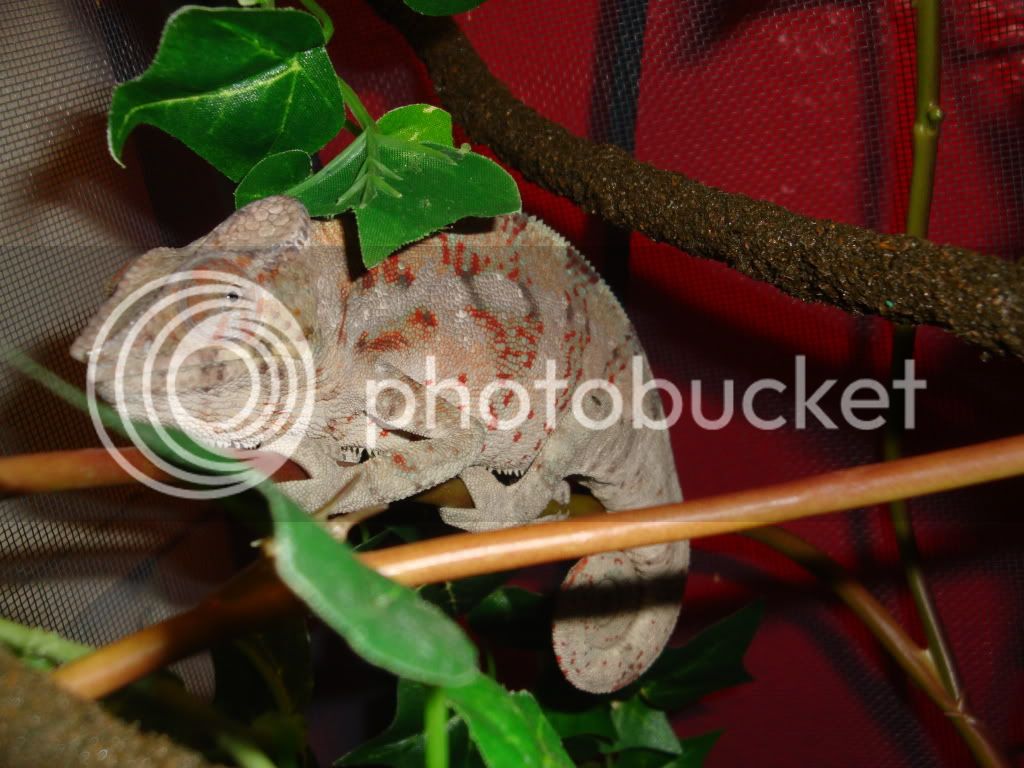 Mouth trouble (no idea why the photo is greenish): 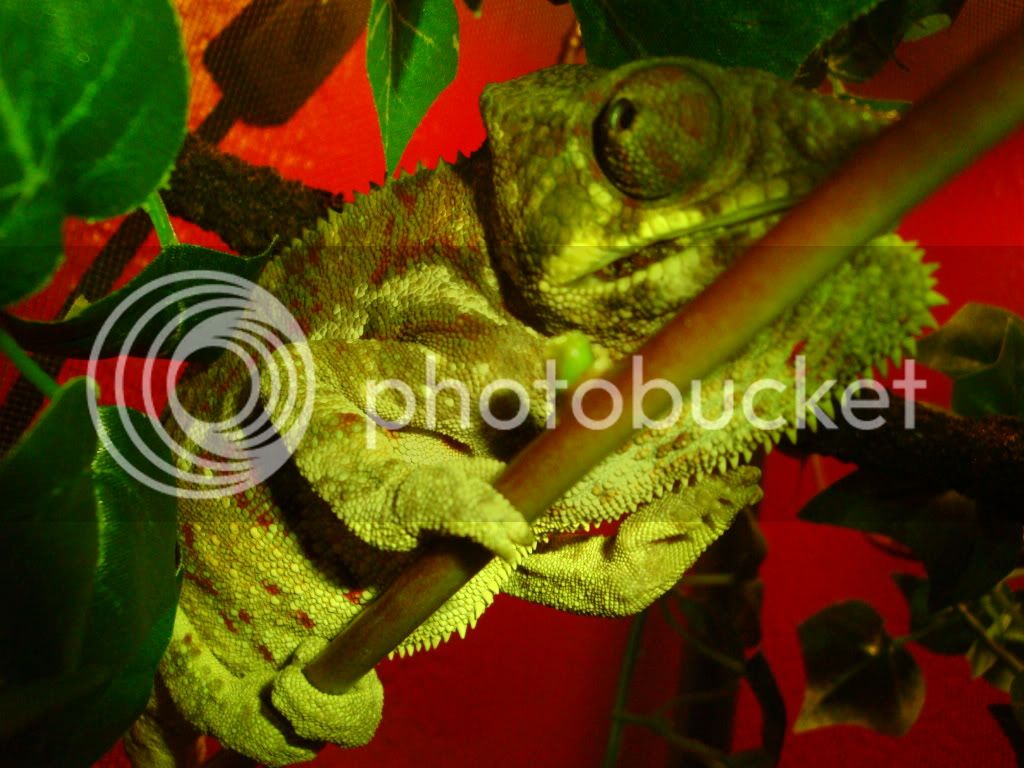 Thank for the help

Do you not have a basking bulb in the cage for him? Also you should be dusting with a plain calcium at every feeding and then using the d3 a few times a month. should also have a multivitamin too. I would change up my gutload and try some fresh fruits and vegetables instead of the Flukers. Try some other feeders such as superworms, silkworms, hornworms that might stimulate his appetite instead of the same thing. Also most of us use the Reptisun 5.0 not the 10.0 Can u post a pic of him and his set up?
P

The breeder was very insistent that I buy the 10.0, but like I said, I'm not sure his info was 100% accurate. It seems to be working for him, but not for me. I will definitely start changing the gut load. I plan to redo with whole cricket set-up next week, so it should be easier then. Thanks

Do you have a basking bulb? and what are you measuring your temps with. Sometimes if they are cold they will darken up. His fat pads on his head could be fuller but he does not look horribly dehydrated. His eyes look ok, not sunk in or anything but not as full as when you first got him. also, where are you located? Can you get him out in the sunshine?
P

He has a 75W basking light, but it's new (like, as of today) because I was told he didn't need a separate one if I got the 10.0. I have the stick on strips that are "supposed" to be for reptile tanks according to the package, though I've seen them used more on aquariums. The basking light is not in the pic because it was blinding through the camera.
Definitely can't get him outside right now for sunshine. We're in SW Pennsylvania, where it's been raining pretty consistently all month and we've only had a few days over 70 so far. I'd love to make him a separate outdoor enclosure. What are the minimum temps for taking him outside? And for how long at a time? And what about full sun vs shade?
I really appreciate your help It's good to know he doesn't look like he's past the point of no return.
Here's the enclosure: 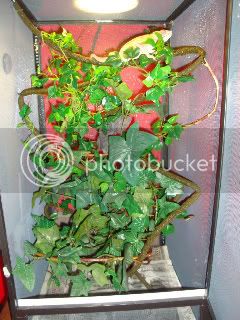 Another question: how long is best for his lights to be on? I was told "at least 12 hours", but that's not quite specific enough for me.
K

It bothers me that there is a change in the size of the head pads but if he's eating/drinking less that could explain it. Its also strange that his color has changed so drastically. Did the color change occur when you started him on the baytril?

Could there be something (carbon monoxide) leaking from your furnace?
P

The color change started a couple weeks before the Baytril. That was my first sign that something was wrong, which, eventually, led to the mouth infection and the vet's office.

If anything, the old furnace was way worse than our new one. The old one was original to the house (1955) and maybe 50% efficient. This one is a brand new 95%. That's part of what struck me as odd, that he looked better before, but I guess even new one's can leak. I do have a carbon monoxide detector around here somewhere. Maybe I should get off my can and put it up, just to make sure.

I did see him eat a cricket a few minutes ago Keeping my fingers crossed that he's still just recovering from the mouth thing.

I noticed you aren't supplementing with multivitamins... what helped my chameleons a lot was orally supplementing small amounts of vitamin a. but you should at least be giving some kind of multivitain

its great you are taking action to help this guy.

1. buy a linear tube 5.0 reptiglo or reptisun
2. normal house bulb for basking. make sure basking temp (90*) is correct as it is very important with you chams appetite and digestion.
3. get him out in the sun as much as possible.
4. as mentioned change your dusting schedule
5. try silk worms as feeders to get him back to par.
6. gutload with veggies/fruit
7. ive had problems with my chameleons eatting the fake leaves off the same vines you have. if you have a lowes around i would suggest picking up a pathos (9 bucks) and a schefflera (7-10 bucks). you dont want impaction on top of what you have going on.

he is at the age where your husbandry has to be dead on. as they pack on weight and bones grow the need for proper nutrition becomes a must.

Peitho8751 said:
We are willing to do whatever needs to be done for him, but I feel like we were under-informed by the breeder, like telling us spraying twice a day was enough with no drip system. I just need some help before it's too late.
Click to expand...

If he's drinking water when it is offered, you don't really need the Pedialyte. Also, if he's drinking a lot whenever offered he's probably dehydrated (thirsty), so your general cage humidity level is probably too low. Cage temps should be allowed to drop at least 10 degrees at night...too warm and he may not be resting.

Mouth/gum/temporal gland infections can recur and can be hard to cure completely. They are also painful, so can keep the cham from eating.

Whether you have a dripper in addition to hand misting may not be the issue. Many of us don't use drippers, but we do spray the cage often. You've got to know the humidity range in your cage so get a decent electronic humidity gauge and watch it. I suspect its drier than you realize (and your new furnace could be making the difference). A tip...use citrus fruit like orange in your feeder gutloads. The Vit. C is supposed to help prevent gum infections probably because it alters the pH of their saliva and boosts immune system response.
You must log in or register to reply here.

M
Is he dying? Can I save him?

C
Many problems with him