Hello! I have a juvenile veiled chameleon (approximately 6 months), named Karma. I got her three months ago from PetSmart so they knew nothing about her. She’s my first chameleon - I had been looking for one for a while, but wanted a friendly one. After five years, I found her!

She’s in a ZooMed mesh enclosure (pictures attached somewhere), UV-B and UV-A 75w. Basking temp is 87.5-89.1 F. Humidity hangs around 50%. I have two of the sides covered with a shower curtain to keep moisture in. She eats free-fed gut-loaded crickets, usually 4-5 small ones a day. She doesn’t drink from her plants that I mist, but she loooooves to drink from my hand or straight from the spray bottle.

She’s been doing great up until the last few days that she was showing signs of dehydration - sunken eyes, pale color, less active. Today I noticed that she hasn’t been eating and found all her crickets I put in her enclosure today alive throughout her space. She’s still moving. Perks up when I get her out. Not as excited about water but will lick it off her lips after putting a lot on her face. I have been force feeding her a bit of OxBox Carnivore Care today.

I am a small animal and exotics Veterinarian, so I have reached out to some of my colleagues more versed in chameleons than I am for ideas. I already know if she doesn’t perk up in a couple days or if she’s gets worse, I’ll be drawing blood and running it on her.

I just wanted to get some thoughts from you all as well! 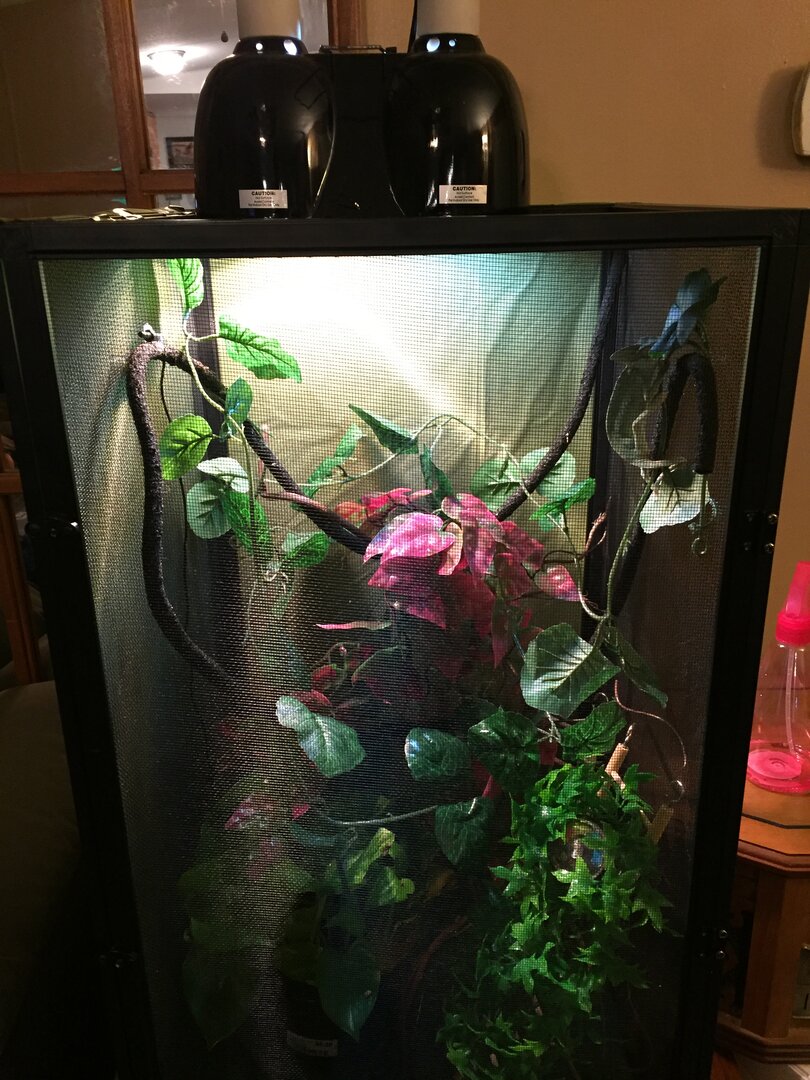 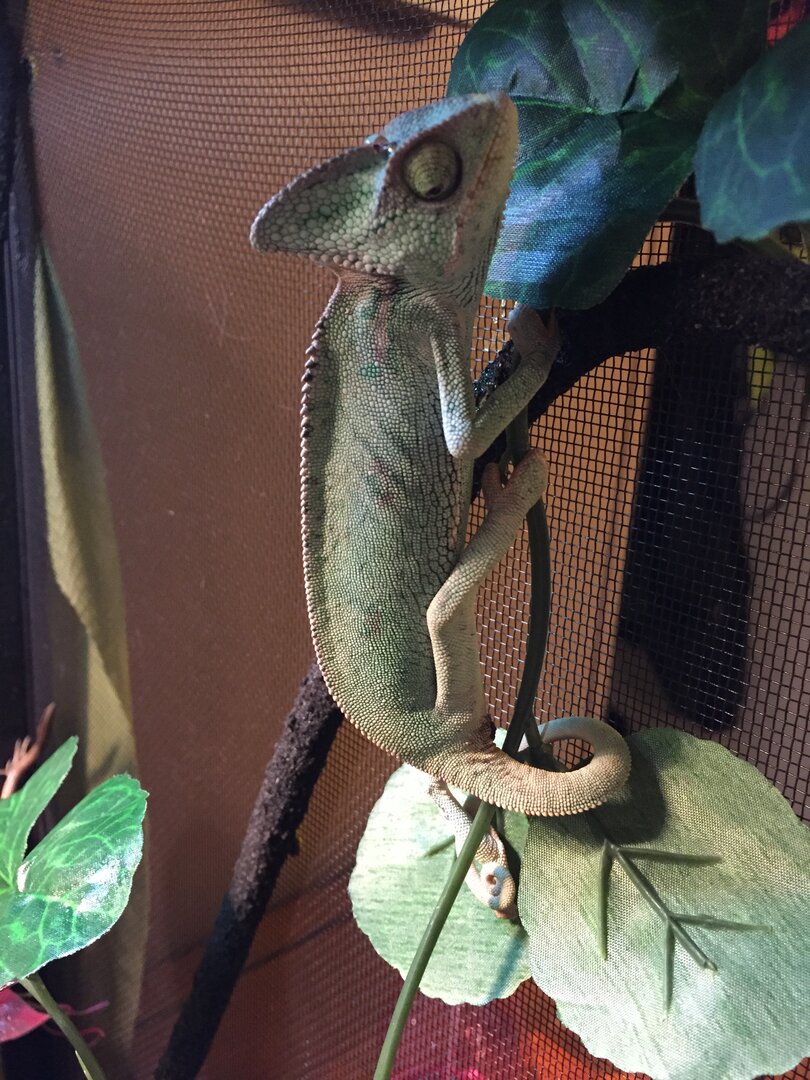 Hi there. Do you have a linear UVB or just the dome lights?

Are you dusting the crickets with any supplements?

You listed a lot of it--but could you full this out.

Chameleon Info:
Your Chameleon - The species, sex, and age of your chameleon. How long has it been in your care?
Handling - How often do you handle your chameleon?
Feeding - What are you feeding your cham? What amount? What is the schedule? How are you gut-loading your feeders?
Supplements - What brand and type of calcium and vitamin products are you dusting your feeders with and what is the schedule?
Watering - What kind of watering technique do you use? How often and how long to you mist? Do you see your chameleon drinking?
Fecal Description - Briefly note colors and consistency from recent droppings. Has this chameleon ever been tested for parasites?
History - Any previous information about your cham that might be useful to others when trying to help you.

Cage Info:
Cage Type - Describe your cage (Glass, Screen, Combo?) What are the dimensions?
Lighting - What brand, model, and types of lighting are you using? What is your daily lighting schedule?
Temperature - What temp range have you created (cage floor to basking spot)? Lowest overnight temp? How do you measure these temps?
Humidity - What are your humidity levels? How are you creating and maintaining these levels? What do you use to measure humidity?
Plants - Are you using live plants? If so, what kind?
Placement - Where is your cage located? Is it near any fans, air vents, or high traffic areas? At what height is the top of the cage relative to your room floor?
Location - Where are you geographically located?

I would not recommend using carnivore care and force feeding so quickly. One day without eating is not a problem at all for them. They can go weeks without, although it is odd for a sub-adult. Force feeding her is extremely stressful, so it ought not be done unless absolutely positively necessary (which it is not at this point if today is the first day she hasn't eaten). Her color is quite pale and a bit unusual looking, too.

I would caution you from allowing her to drink straight from the spray nozzle. It is extraordinarily easy for them to aspirate water when you do that, which can lead to respiratory infections. Safer to let them do it naturally.

It also looks like your UVB light is not correct for chameleons. You need to be using a linear UVB, not a compact one

Complete the above for sure.. also check here: https://www.chameleonforums.com/threads/chameleon-poop-101.120171/

Staff member
She definitely seems thin to me, and I am a bit concerned that she looks a bit dehydrated to me. I think a vet visit is a good idea if you have a vet experienced with chameleons (I see you have some connections from your post), and if you can get a fresh fecal sample that would be good as well. I don't think 4-5 crickets a day is enough at this age, and you may want to try some different feeders such as silk worms or Discoid roaches. Hornworms are great too, but they grow very fast. You can even use Superworms as another feeder for variety. As for the lighting that you are supplying, we can get into that after e see some better results from your girl. I prefer to use linear bulbs rather than the domes for UVB and Plants.

Staff member
Other than spraying directly from a bottle, how are you providing water and on what schedule?

(silkworms are a great feeder, nourishing and full of moisture. Slower growing than horns, easy to keep)
Last edited: Aug 1, 2019

Add supplements to dust her feeders with will help her out. I recommend adding Repashy Calcium plus Lod used at every feeding lightly.

Definitely needs a fecal test done because she looks really thin and dehydrated. Possibly due to parasites.
You must log in or register to reply here.

How long before chameleon settles in and starts eating again
2

Female panther not moving much