Staff member
One way we can monitor the health of our chameleons is monitoring their bowel movements (poop) for any problems. To be able to identify problems, first you need to be able to recognize what is or is not normal. There are two parts to a bowel movement in chameleons - a brown part (feces) and a white part (urates).

Feces
The brown part is feces from digested food like any animal will make. It should be brown or almost black, soft but firm, and have a well formed shape. Generally chameleon feces do not smell very much, if at all. If undigested insect parts are seen in the feces temperatures may not be appropriate or intestinal parasites may be altering digestion (see below). If many soft bodied worms are fed it may cause runny feces due to the extra hydration from the worms. 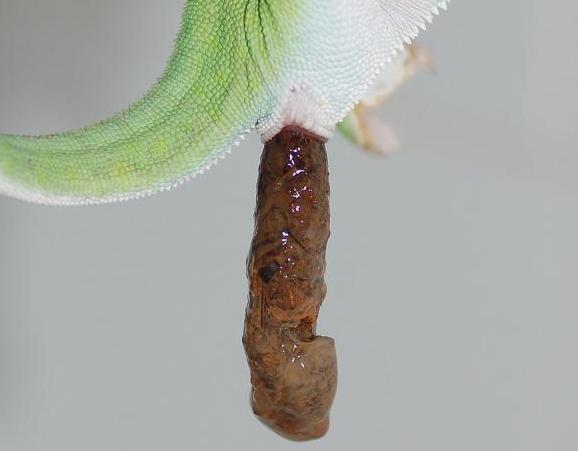 Urates
The white part of a bowel movement is called 'urates' and represents a more solidified version of urine. Reptiles have evolved to use water more efficiently so instead of urinating, they only excrete a concentrated solid waste and retain most of the fluid. This is especially useful in regions when water is not plentiful to prevent dehydration. Urates should be white, soft but firm and may have a chalky texture. A yellow tinge is okay but orange urates indicate that your chameleon may not be getting enough water. If your chameleon defecates infrequently the end of the urates may be more orange but the rest still looks white. The longer the urates sit in the body the more fluid is reabsorbed from them back into the body. A small amount of mostly clear fluid with the urates is true urine and indicates good hydration, but is not always present. 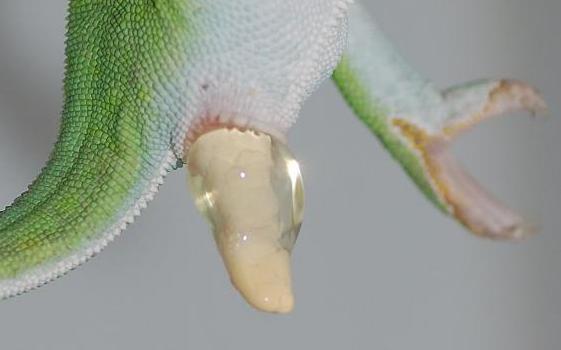 Frequency
How often your chameleon defecates depends on how often it eats, how much it eats and how long it basks. Basking is necessary for good metabolism and digestion of food, so low temperatures can delay digestion. Each chameleon can have a different pattern. Some will defecate every day (especially when younger) while other may be once every few days, once a week or once every two weeks. Most adult chameleons defecate once or twice a week generally.

Sperm Plugs
With the bowel movement of male chameleons you will usually see sperm plugs. These are a pair of white soft waxy deposits that dry out quickly. 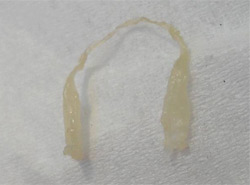 Hemipenes
Sometimes you will see a red organ come out during a male's bowel movement for a short time and then to back into the body. That organ is a hemipenis (plural is hemipenes) - the male reproductive organ. As long as it goes back in then it is nothing to worry about.

Parasites
Intestinal parasites can alter digestive processes as well as the bowel movement consistency or smell. Very soft, liquid or smelly feces could indicate an intestinal parasite problem. Only rarely with a large parasite burden will you be able to actually see the worm in the feces. For almost all intestinal parasite infections the only way to detect them is to look for the microscopic ova (eggs). The worms remain in the intestines and periodically shed ova that come out of the body in the feces where it can infect other animals if given the opportunity. Most parasites are not contagious to humans but always wash your hands well when you come into contact with fecal material. 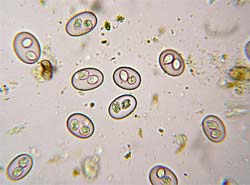 Fecal exams
To detect parasites in feces collect some of the fresh feces (brown) portion with a tissue or paper towel and keep it in a sealed ziplock bag. If the feces are dried out wait for a fresher sample. You can store the fecal sample in a cool place for up to eight hours before delivering it to the vet. You can store it overnight in the refrigerator if you need to. Since excess heat or cold can kill the organisms in the feces, thus defeating your purpose for collecting it to begin with, don't freeze it or leave it in your car. Urates are not needed for fecal testing.

The primary fecal test the vet will do is a fecal flotation to check the feces for the presence of worm ova. A specific mineral solution is combined with the provided feces so that the ova separate from the feces and float to the top where they can collected and looked at under the microscope. Some intestinal parasites like protozoans are microscopic and can be seen in the feces themselves by performing a direct smear, where diluted feces are placed on a microscopic slide immediately for examination. Medication will be administered depending upon the type of organism found.

It is recommended to have fecal exams done on at least a yearly basis to detect parasites.

Some owners may want to do fecal exams themselves and can purchase the microscope and necessary supplies. If a parasite or ova is found the sample should still be taken to the vet for confirmation and to prescribe appropriate medications at the correct dosage. Dez has made a video on performing fecal floats for those interested. https://www.chameleonforums.com/how-do-fecal-float-video-111996/ 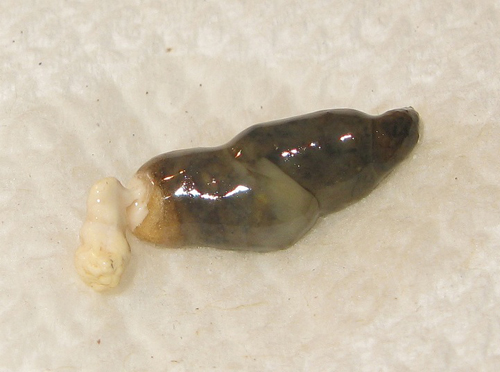 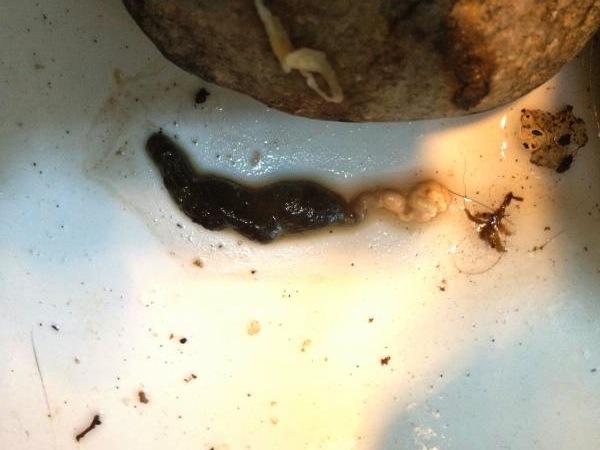 Normal bowel movement and sperm plug on the rock next to it. 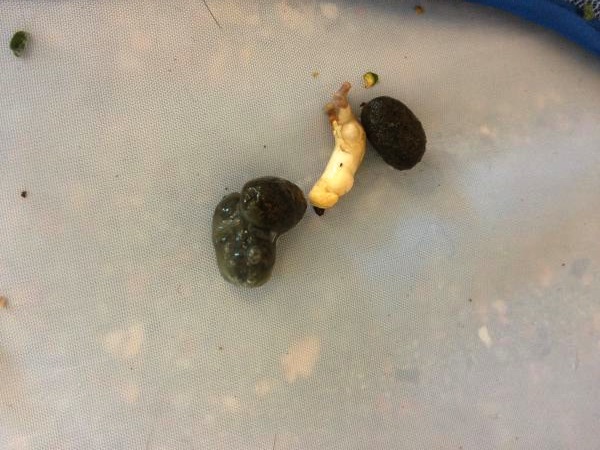 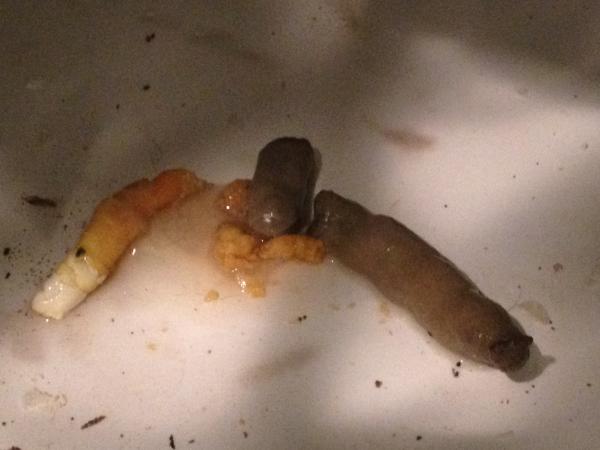 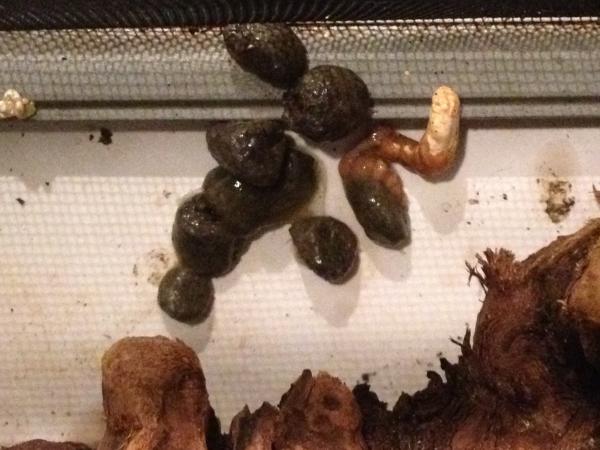 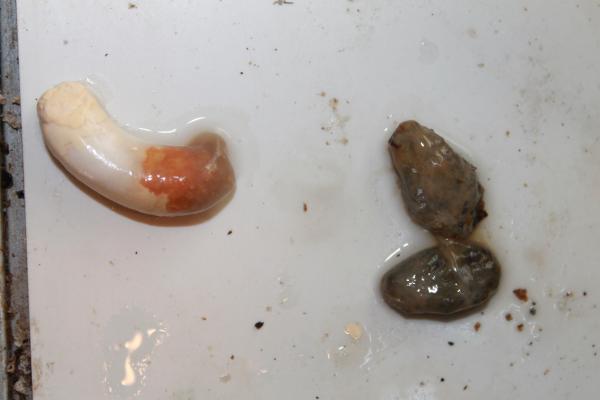 Mostly white urates and normal feces. This bowel movement was about a week after the previous one, so a little orange of the urates is okay. 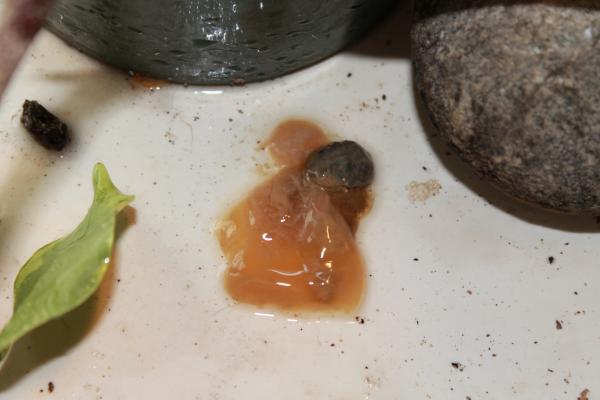 Diarrhea due to a lot of hornworms in the diet which are very juicy.
Last edited: Feb 15, 2020

I love a good poop thread!

Excellent post Dayne! Thanks for the information. I highly recommend Dez's video as well!

Staff member
Feel free to post your own poop pictures! I will happily replace mine with better ones. So if you have any suggestions for the info provided (if it's unclear or confusing, or if something should be added) please let me know - here or by PM. And I'd love to get some better pictures so I can make it a sticky later since everyone wonders about poop!

I have to say I kind of cracked up when I saw the hornworm poop and then the commentary after it... They are very juicy! lol

Did someone say poop?

Staff member
Haha, those are awesome! Definitely using those if you don't mind.

I am starting to think we all have a problem....

edit: This really should be sticky'd to the top

Great thread, Dayna. It's nice to have a guide to be able to gauge what's normal or not. Like they say, a picture is worth a thousand words.

Let's get some posters for sale! Could have used this thread a long time ago, but better late than never. It should be placed at the beginning and permenantly like some of the others. Will cut down on a LOT of newbie questions at the beginning of their careers with chams. nice job. (you may just have a little too much time on your hands)
T

I have to admit Im thankful for such great information and quite disturbed that these are the things we appreciate. LOL.

Great information ...thanks. I always questioned the quality of my Chams poop. really a great informational thread, but i agree that we all have to be a little off the fact that we are reading about poop in our free time.

Staff member
Glad everyone likes it! Let me know if you think there's anything else to add or if you have pictures to share.


techmikef said:
I have to admit Im thankful for such great information and quite disturbed that these are the things we appreciate. LOL.
Click to expand...

Right?! My husband was peering over my shoulder and was like "what heck are you doing?? Did you seriously just write a paper on poop?!"


junglefries said:
(you may just have a little too much time on your hands)
Click to expand...

I'm one of those people that thrives with a dozen things to do at the same time! I finished reading my list of books and finished my painting and needed another project. Cham stuff is always a winner.

ferretinmyshoes said:
Right?! My husband was peering over my shoulder and was like "what heck are you doing?? Did you seriously just write a paper on poop?!"
Click to expand...

why yes ..yes you did, and we all seriously just read it.

The scoop on poop. Love it!

Thanks for writing this - and for all you do for the forum - this will help many people , and no one knows her "poop" like you
here is one " in action" with sperm plugs if you want to use it

great educational post on "poop". eventhough i'm 45, i'm 12 at heart. i actually didn't start giggling, you know cause poop talk is hilarious, until the action shots. then i couldn't help it. thanks(?) for sharing this info.
You must log in or register to reply here.

How to disinfect chameleon enclosure after parasites
2

Haven't seen my chameleon eat yet...

Hemorrhoids? What do you think?