Exactly one year ago to this day, EXACTLY, I got my Fish and Wildlife license to import chams from Chameleon Nation. The shipment was originally supposed to happen about 6 months ago or so. Fish and Wildlife turned the shipment down due to one tiny deal on the CITES and Declaration paperwork. I'm sure it totaled hours of how many times I talked to F&W before doing this paperwork taking meticulous notes in order to do everything exactly right. They did not tell me about the deal that ended up having them reject the CITES. We then had to redue the paperwork and have a rushed CITES, and things were ready to go at about 8/9 months into the ordeal. The weather was waaaay to cold to ship by then. Then when the weather warmed up at about 11 months, the US shut down any shipments being flown in from Canada. The ban was lifted about a week before my license expired, and Chameleon Nation was able to ship the chams. I then received them on the exact day a year later that I got my license.

I am writing this, because Chameleon Nation (Tamara and Drew) are amaaazing people to work with! I can't say enough good good things about how they conducted business and their communication with me throughout this whole ordeal. They kept and fed my chams for a YEAR! They worked tirelessly to get this done for us. It just seemed like every single agency involved would throw a red flag when everything was just about to go through.

So, now to the shipment. When I received the shipment, it was immaculately packed. I mean, it was in perfect condition, packed tightly with heat packs and in a styro foam cooler type deal.

I know this is long, but it's been a looooong year, and I think I'm finally breathing a sigh of relief and having a beer. I want to give you both Tamara and Drew a sincere sincere thank you for everything you have done. Thank you for all the work you did. It was completely worth the wait.
L

Pictures?? and glad to hear you have your little ones now well i guess they prob arent 'little' anymore but you know what i mean!!!
view our sponsors

Glad you finally got them. I always wondered about the import process but will leave it to the pros.
Let see some pictures of those chams. What are they of you dont mind me asking.

Thanks! They are a mix of Falys and Mitsio. Hopefully in a few days/weeks I can take some pics. Going to let them chill for a little bit.

Yeah, the import process is crazy! I think it might be easier to smuggle drugs into the US than wildlife.

After seeing these guys though, if you live in Canada and want an amaaaaazing cham. Hit up Drew and Tamara. I know I'm saying this a lot, but I really am so happy. Feel like I know them as family now. Just awesome awesome chams and great great people.
E

Not that I'm opposed to cross border trading, I'm just curious. It seems like all the species you bought are available from board sponsors in this country.

We usually see Canadian posters bemoaning their options, yet you chose to go through a Canadian business.

Chameleon Nation had what I was looking for Eliza. There are great companies that I've dealt with here; both Chameleons Northwest and Screameleons. I've heard nothing but great things about almost every sponsor on here. Unfortunately non of the US based companies had available what I was looking for. Believe me it would have been much easier to buy here in the US. Luckily there is a great company in our neighbor Canada. And it also might have a little to do with the fact that my favorite band is Canadian.

Hey, if we didn't have cross boarder trading, we wouldn't have chams now would we?
Last edited: Mar 31, 2011

I wonder if there are any breeders in Mexico?

Congrats!! That is awesome. Glad it all worked out although it was a very lengthy wait for you.


Seeco said:
I wonder if there are any breeders in Mexico?
Click to expand...

None on a big scale. If you think exporting from Canada is tough, from Mexico is nearly impossible. Wild life laws are complicated.

People breeding chameleons mostly breed Veilds, in a small scale and they sell locally. I dont know anyone breeding panthers and again, because of the demand I think they would sell fast locally, so no worth the trouble of exporting.

Congrats man!! I would say US customs and FWS can be a pain in the butt but they are just doing their job. Still a pain in the butt, but you get me. It takes probably a good 6 or so months, maybe more, from when my German friends tell me they want to send something over. Its so worth the wait to open up the package to see the goods!! Being this is just my hobby, the amount of time it takes and all the other worries, it can be quite emotional when you finally get that package out of the airport

I cant wait to see the pics Kevin. Its going to be hard to wait for em now that I know their here. lol

Congrats. Its about time. Cant wait for pictures. I usume now that its been a year. They should have their color now. Unless you went with new babies. Im not sure if you said how old they are.
M

Wow, that's awesome of them to do that for a year for you. All I have to say is pics pics pics.

melric said:
Wow, that's awesome of them to do that for a year for you. All I have to say is pics pics pics.
Click to expand... 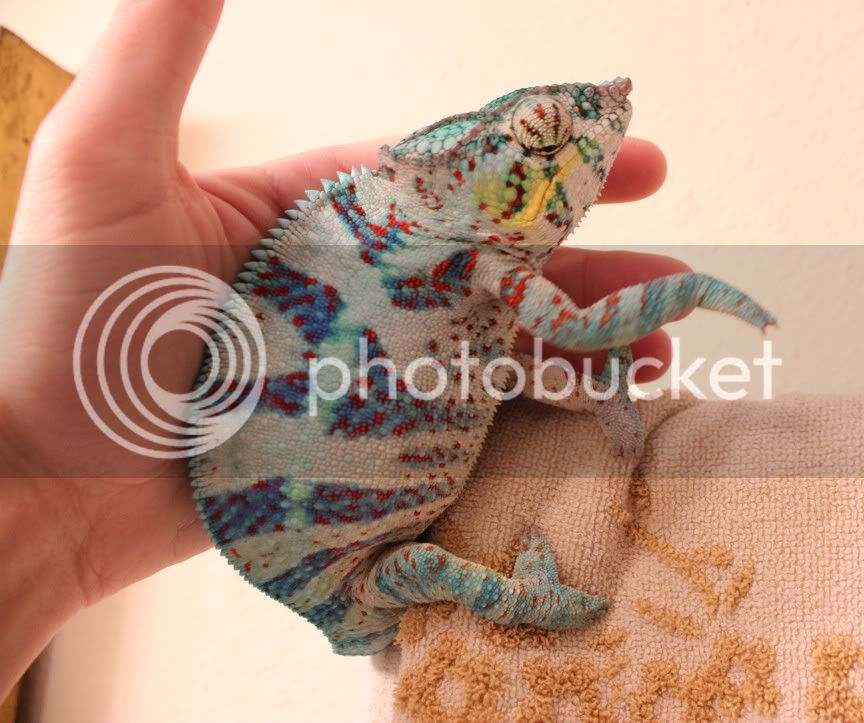 Wow Indeed! What a bright and beautiful animal!
Well worth the wait and complications no?
Well done the sellers, I might add, best add 'em to the xmas list mate!

jojackson said:
Wow Indeed! What a bright and beautiful animal!
Well worth the wait and complications no?
Well done the sellers, I might add, best add 'em to the xmas list mate!
Click to expand...

Thanks Jo! It was well well worth the wait, and all the government agency problems.
S

Gorgeous! Glad they finally made it, and it was definately worth the wait!

He is frackin gorgeous! Seriously, I was floored by that pic. He looks like a piece of candy or something....

This is a Great victory Congrats. I look forward to seeing more Raiden babies.

Thanks Scott! How those babies doing??