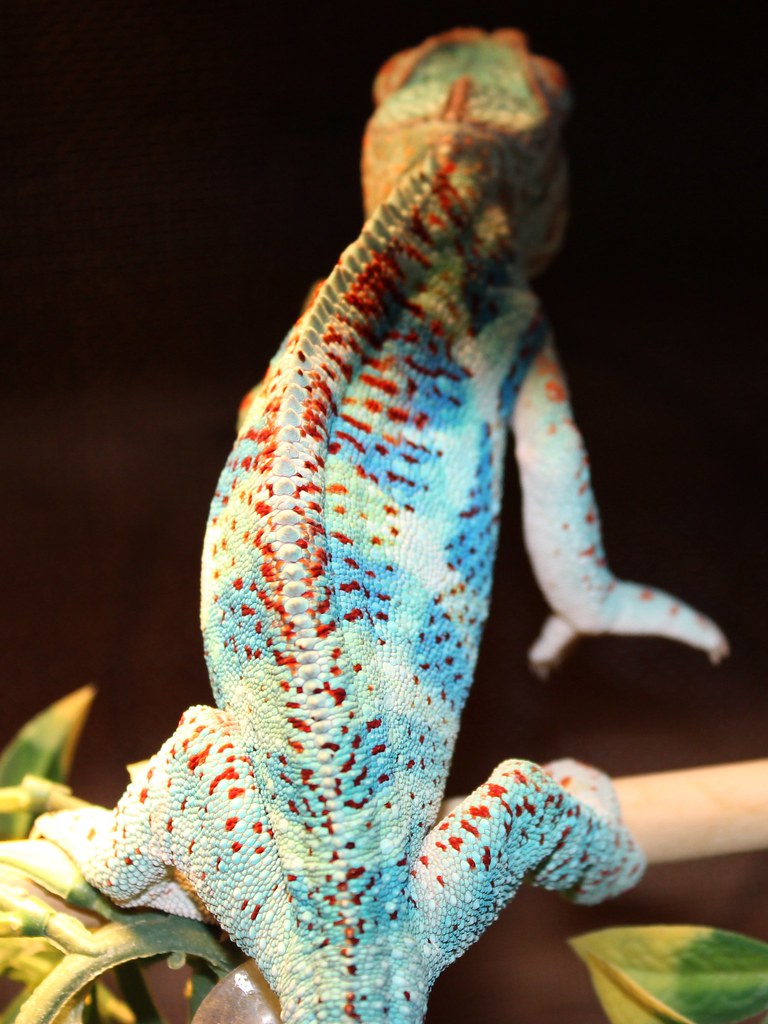 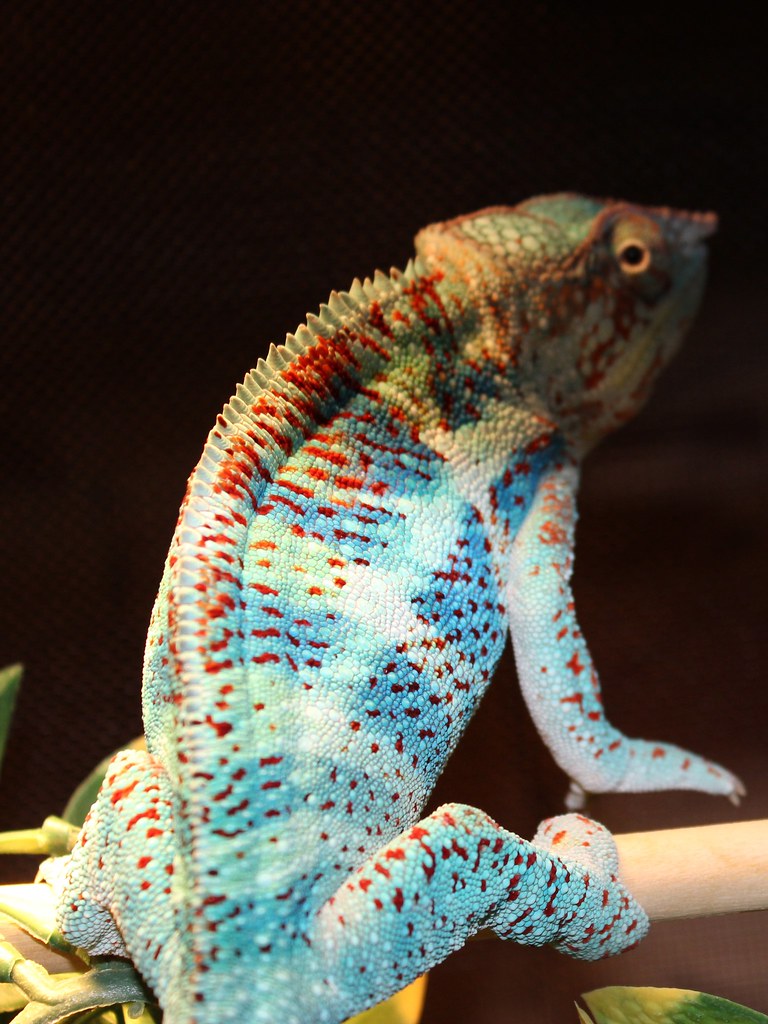 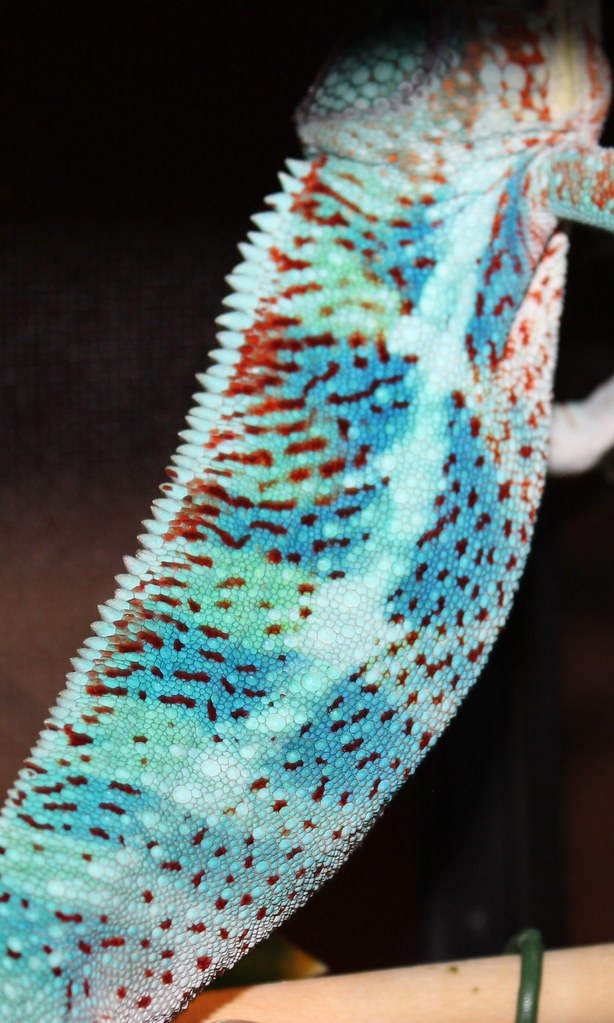 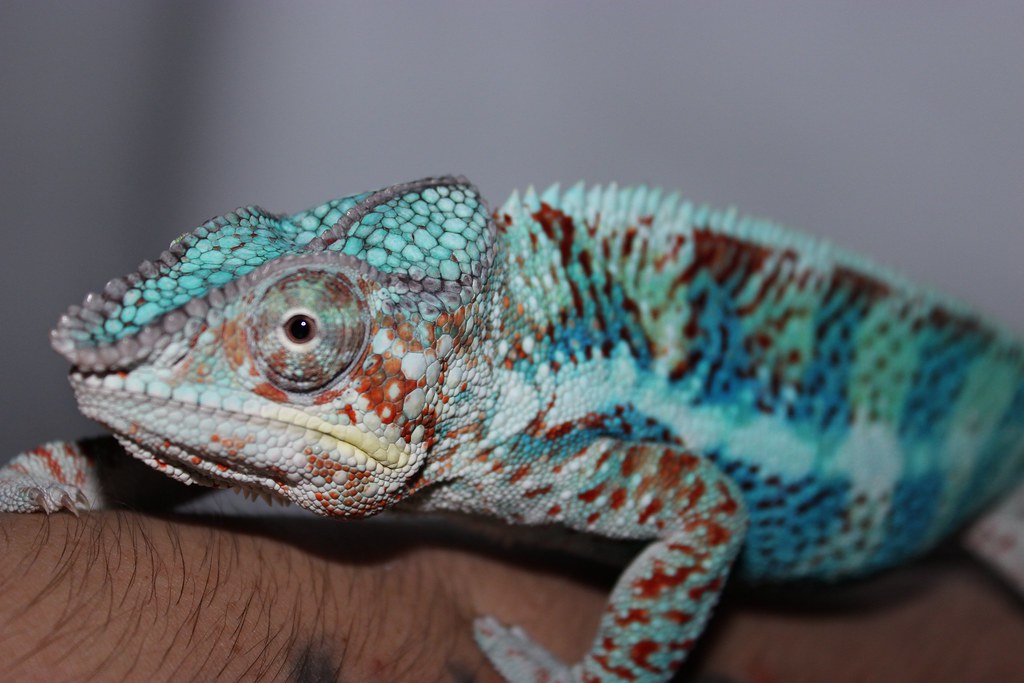 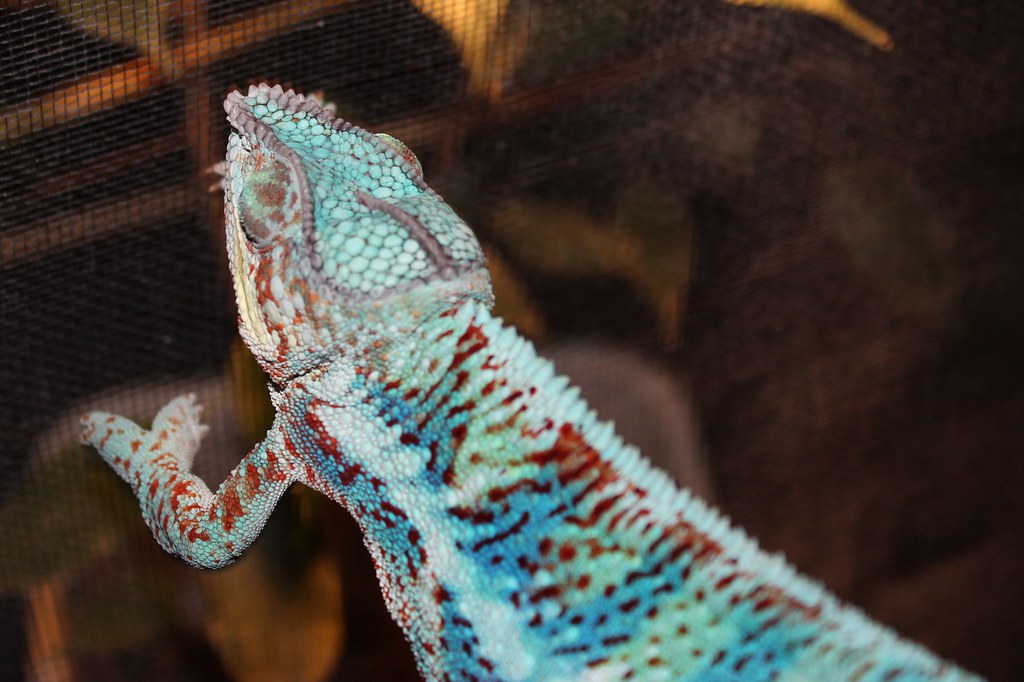 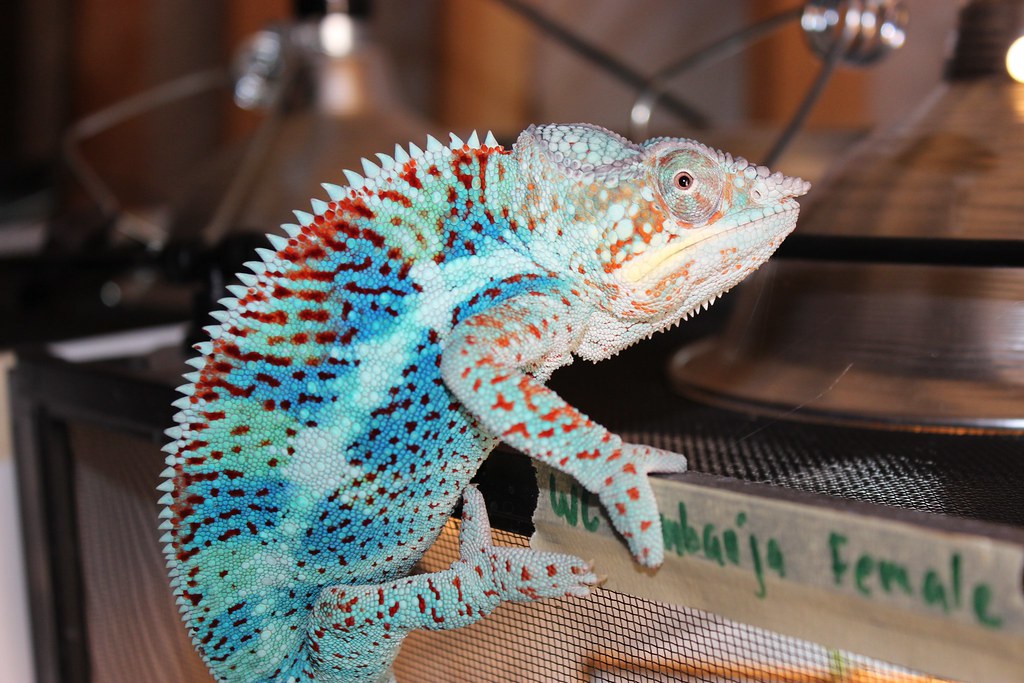 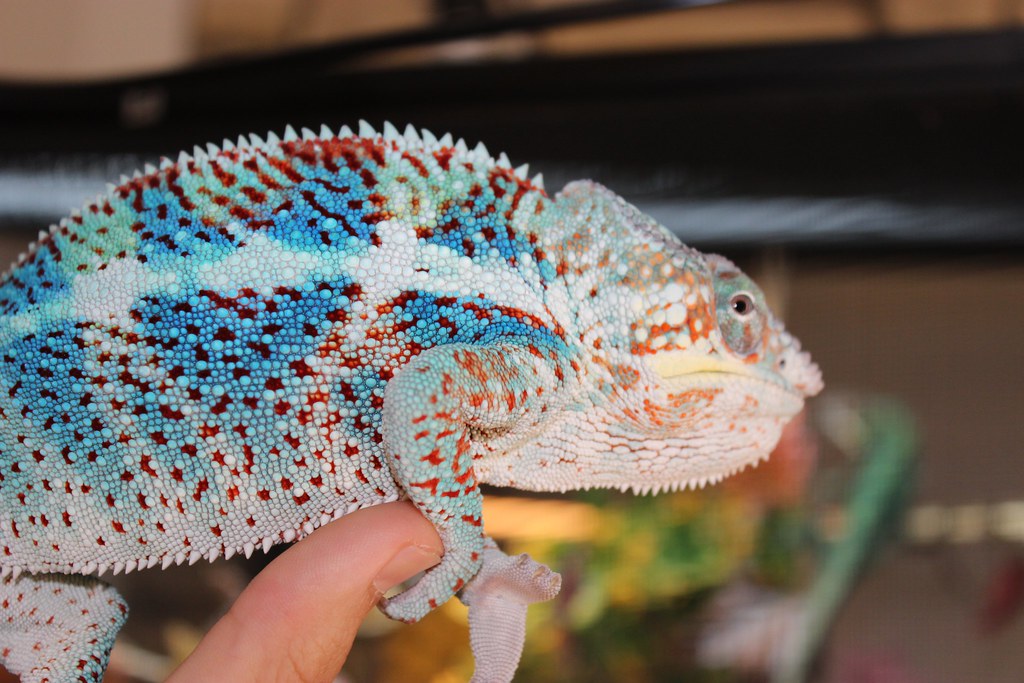 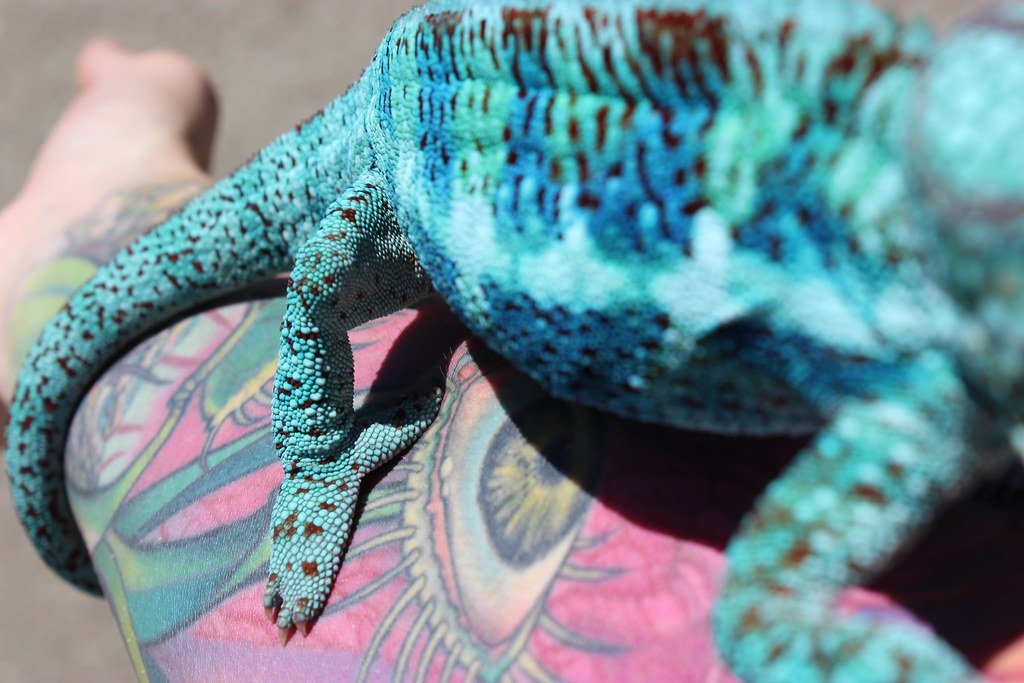 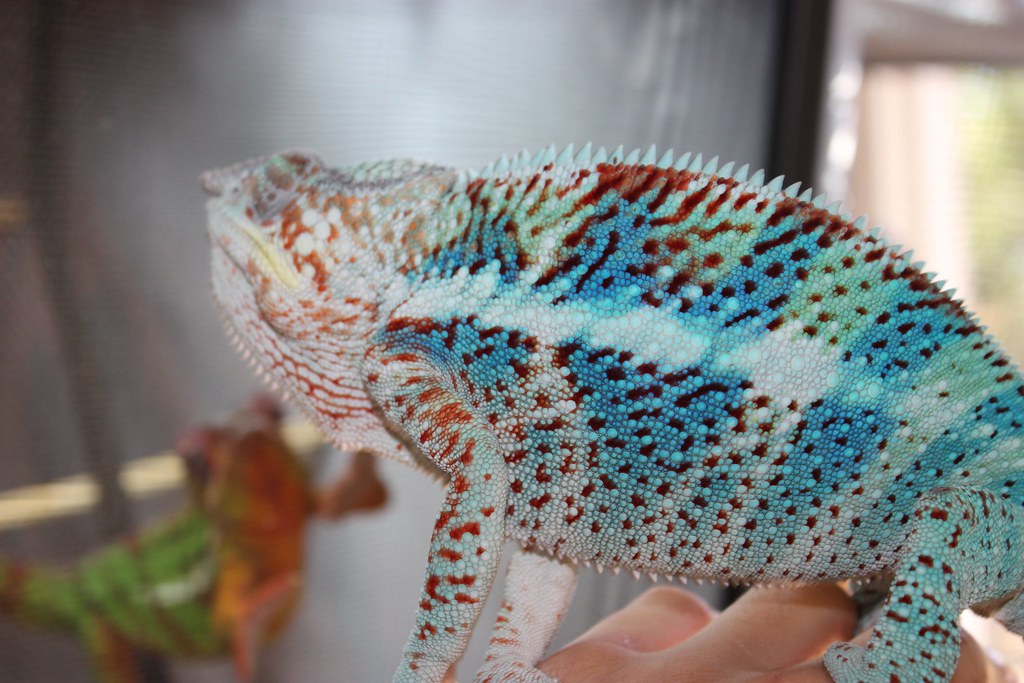 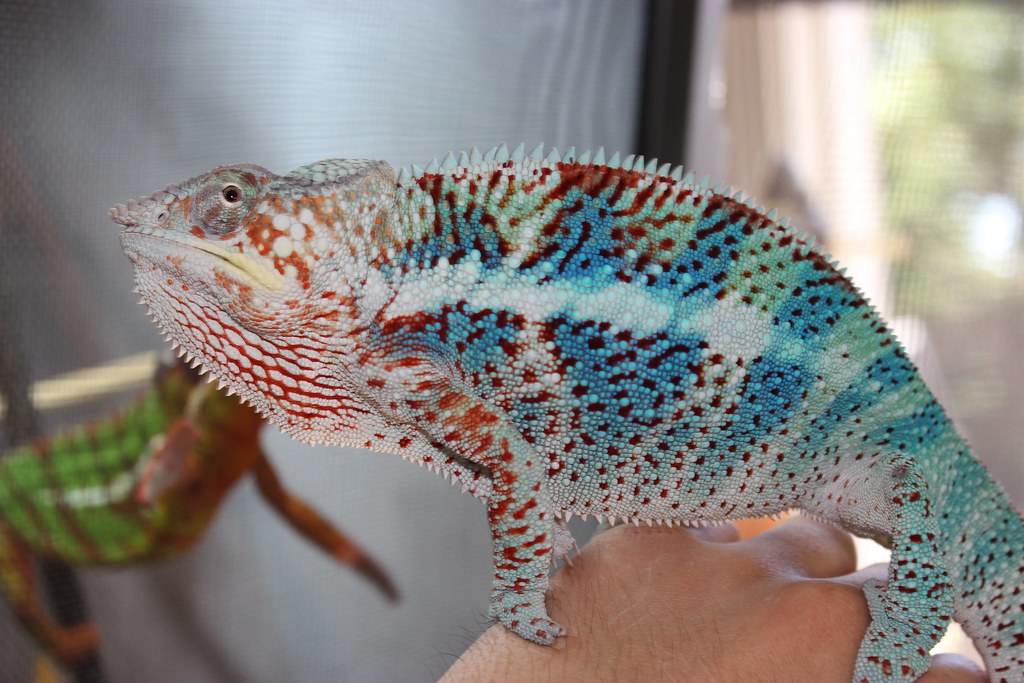 thanks. he was sold to us as Ambanja by another forum member with Thor from Kaleidoscope Chameleons as his sire or grandsire. He definitely looked very ambanja-esque at the young age, but he's since been through some pretty crazy color phases, with very drastic changes, including one not too long ago where his body was almost completely red and white, with almost no blue whatsoever. he's been on this blue on blue with heavy read rain look for a few sheds now. We think he looks like some of the more unique ambanja breeders we've seen, like Kammer's Ohtar, but with more exaggerated rain. So we think he's either Ambanja or maybe Ambanja with some Faly. What do you think?

There is a very common misconception now that any ambanja with red rain is a cross! That is very wrong! Ambanjas in many cases can have amazing red rain, especially the wild caughts, which I think proves that ambanjas naturally have red rain without being a cross.

Don't let people convince you he is a cross because their ignorance. He looks pure ambanja to me.
P

Here is was when he transformed into a red & white panther and folks guessed maybe faly and tamatave https://www.chameleonforums.com/progression-our-ambanja-stunner-going-bb-almost-all-red-105211/

He is beautiful! It is amazing the variations in color of the same locale from breeder to breeder. Part of the fun of owning these animals is watching the color changes!!!

And now he is coming back home to me AGAIN!! Can't wait to see him in the morning!! Funny, I did this with a pair of high end house speakers a while back too lol. My friend and I kept trading them back and forth and he was the last to get them. I plan on keeping this guy when I get him back this time though!!

im proud to say im the new owner of "double rainbow". bought him from a guy in saint pete. He is now better then ever,
P

congratulations! after he gets settled and acclimated, please share pictures often

ill upload some tommorow. his colors right now though, are seriously better then before i would say. but he did look good when he was young as well.

@Adashek123 it's been <2 weeks but he sure was changing a lot and only seemed to be getting better with time.

I would point out though that he's been shuffled around and stressed A LOT in the past two weeks and could almost definitely use some time to acclimate and de-stress.

We had no idea he'd be changing hands so much, but we sold him and shipped him to Florida just under two weeks ago, then I think he's been bred and changed possession twice since then. 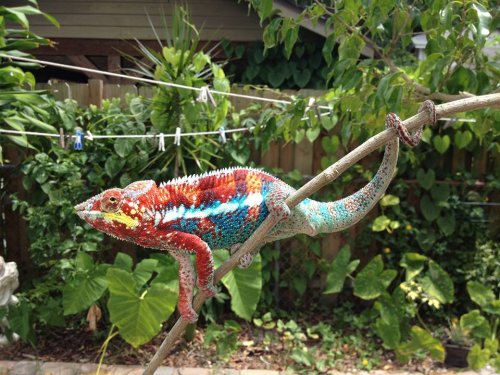 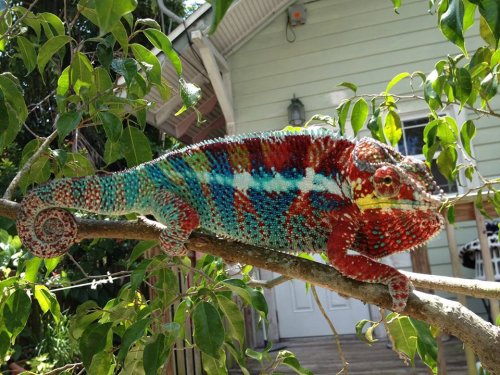 Here is double rainbow as of two days ago. as you can see, he changed ALOT. so happy to have him.

Here is double rainbow as of two days ago. as you can see, he changed ALOT. so happy to have him.
Click to expand...

Man, he looks INCREDIBLE!! Good job with him!!

thanks man, also thanks for the great chameleon. hes extremely hyper and energetic almost all the time so i made him a pretty big cage

WOW! Those guys are amazing! Very cool.
You must log in or register to reply here.

K
Bluejays are not blue...