Does a Chameleon bite actually hurt?

I've had Jacksons and now I have Veileds.
Several of my Chameleons have displayed an open mouth threat. But none have ever bitten me.
Is their bite a painless clamping like that of a small Anole or more like the vise grip chomp of a Skink.
I'm guessing more than one of us knows the difference.
Just curious. Because I'm pretty sure that my largest male is going to actually bite me the next time I try to disturb him. I've been letting them live outside for a few days and there will be a cool spell next week.
I've just ridded their inside enclosures of ants. And I'll have to bring them back inside

Oh you are in for a treat. Their bite is a hydraulic press. If you get bit, just let them clamp down, if you pull your hand away you will do more damage to you and your cham. Pretend to stab yourself with a fork, that about what its like. Lots of pressure and pointy spots, and maybe breaking the skin. But yes an adult male veiled is in the top 3 for pain per pound, and the top 1 if he gets a knuckle or a fingernail.

Try coaxing them onto a stick to get them out of their enclosures. Is much kinder to your flesh and I don’t think they freak out as much.

My sweet little angel Clarice has learned how to inflict maximum pain. Instead of blindly lunging and grabbing whatever skin she can.... now she takes her time, looks around, and slowly moves in for softer skin to bite and then twist. Her favorite place to bite my husband is between the fingers! Love hurts man!

I’ve kept allot of different chameleons and the bites I’ve had were never bad. Usually, I get bit hand feeding the sick and older guys. I had a male veiled I took in at almost 3 years old with health issues and he would hiss and sway the first few months but he was all bluff and nerve bit anyone.

Mine drew blood a few days ago, got me on inside of finger

If he bites you just bite him back, he wont do it again!

It's not that bad, I don't think even Skink bad. I have never had any lizard break skin on me. I got bit by a Burmese Python as a kid, that hurts. Oh it was a 15ft Burmese Python.

I have never been bit by a veiled though, never had a veilied, Just Panthers and Jackson's. I am not sure if Veilieds bites are worse.

That said, it likely also depends where. I have never been bit between the Fingers, like Snitz said. I reckon that would hurt pretty bad.

I got bit pretty damn hard by my panther when I woke him up. He was a juevenile still and I almost lost a chunk of flesh from in between my fingers lol. He did not want to let go and was swinging his head trying to tear the skin.

I think I remember seeing a while back, someone got bit by their adult Parsons and got a pretty serious infection? Think that was Facebook though and last I had Facebook was like 3 years ago so my memory might be foggy.

Overall, I think it is rare for them to do excessive bites. In my case I was stupid and he was in shock from waking up.

Now imagine getting bit by a green tree boa?!

Coda thinks shes all tuff and stuff but is more of a little diva when it comes to biting. She hisses, sways, gapes, puffs, and lunges, but she prefers to bask and give me the stink eye than get her teeth dirty.

I think I'm just being too abrupt when I move them from inside cage to outside.
I never pull on them. But I do use just my hand to grab them.
Only the largest protests too much. The others try to hide briefly, then give up.

it feels like getting bite with sand paper to me haha doesn't hurt really ... just catches you off guard .

ZEROPILOT said:
But I do use just my hand to grab them.
Click to expand...

This may be your issue.^ Speed is probably a factor too. Exactly how do you get the big one out? What do you do with your hands?

Yes, chameleons can bite hard enough for it to hurt... this was from my adult male veiled from last year. After this I wear gloves anytime I have to go in his cage and he doesn't cooperate 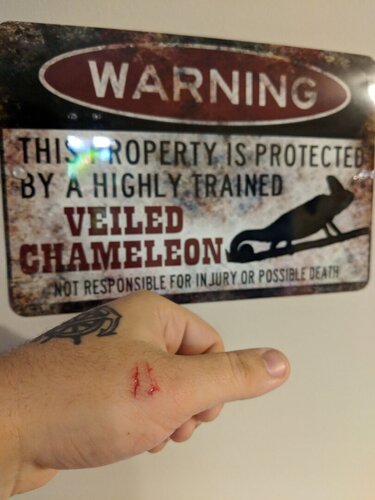 Kyle is the Conner Mcgreggor of the cham world, lures you in and BAM! Hits you from a crazy angle! Lol

Brodybreaux25 said:
Kyle is the Conner Mcgreggor of the cham world, lures you in and BAM! Hits you from a crazy angle! Lol
Click to expand...

Lucky me haha. I've wised up to his tactics. This was the last bite I ever received from him. When I am cleaning his cage I need to move fast because after 10 minutes or so of being in his space, he starts lunging at me with those teeth.
K

Veileds are the worst IMHO...they usually latch onto the skin and twist trying to rip the piece they're holding onto off you.

I was bit by a monkey tailed skink and it hurt like heck...but they don't seem to latch on...just bite and "run".

Had 5 stitches from an iguana ...and she wasn't biting me...I just accidentally drew my finger against her teeth.

I had one "bad" male veiled that would chase me across his cage to bite me. If I put him on a branch so I could clean his cage, he would chase me down the branch to bite me. Glad I never had another one like him! But I still loved him!
K

He only got me once!
You must log in or register to reply here.