If i walk in the room, he quickly gets to the front. If I open the enclosure, he runs and tries to lurch onto me, or his feeding cup; whatever to get out. But, whether its to get out of the cage or to lurch into his tree when he’s out, he has been a bit clumsy. I literally caught him from falling yesterday off the cage screen, and today he nearly fell out of the tree. He grabs the leaves instead of branches and they twist. It seems like hes running faster then hes thinking.

I’m getting a new cage soon, but the tree he loves wont fit. I did get him a similar, but smaller tree and put it into his enclosure. He sits in it and likes it, but still wants out fast!

Also, he’s been exploring when hes out of his cage. For example, trying to climb on my louvred windows. The problem is, he slips. If I’m not acting like the helicopter parent, he’d fall down. Guess I need to chameleon proof my house.

So, how do I keep him from falling or getting hurt? Am I just paranoid?

You answered your own question, Cham proof your house.

I do not let Beman have free run... The things we have in our house are not natural to them. Like the curtains... They can get their nails caught up in them.
When he is out on his tree I am right there 3 feet away watching. Sometimes he will try to crawl up the window which does not work obviously. So I have to be there to move him back to his tree or yes he will fall. Kinda like having a 2 year old. Constant supervision when they are up and running around. lol

One thing I did was build a little free range area and hung it up on the ceiling. They can't go anywhere when they are on it. I don't leave them alone but if I did I know they can't take off. Other areas I have are like plants in the house but only my panther tries to climb down from there so I have to watch him close.

Build him an isolated free range on the wall, hang some plants and put a branch or two between them. Just make sure he doesn’t have anything close enough to him that he will want to stretch for. He will sit there contently all day.

I do basically have a small free range area. Its two plants on stands that he cannot get off of, but that doesn’t mean he wont try. He’s pushing further and further. Just seems like he has more confidence in his tail grip then I do.

Damn. Now I have another kid who I have to worry about making bad decisions.

He’s probably approaching sexual maturity, his hormones driving him to patrol and find a girlfriend. How old is he?

Brodybreaux25 said:
He’s probably approaching sexual maturity, his hormones driving him to patrol and find a girlfriend. How old is he?
Click to expand...

No that’s a bit early for a GF, post a current pic of him and his entire viv.

Here are pics of him and his enclosure... 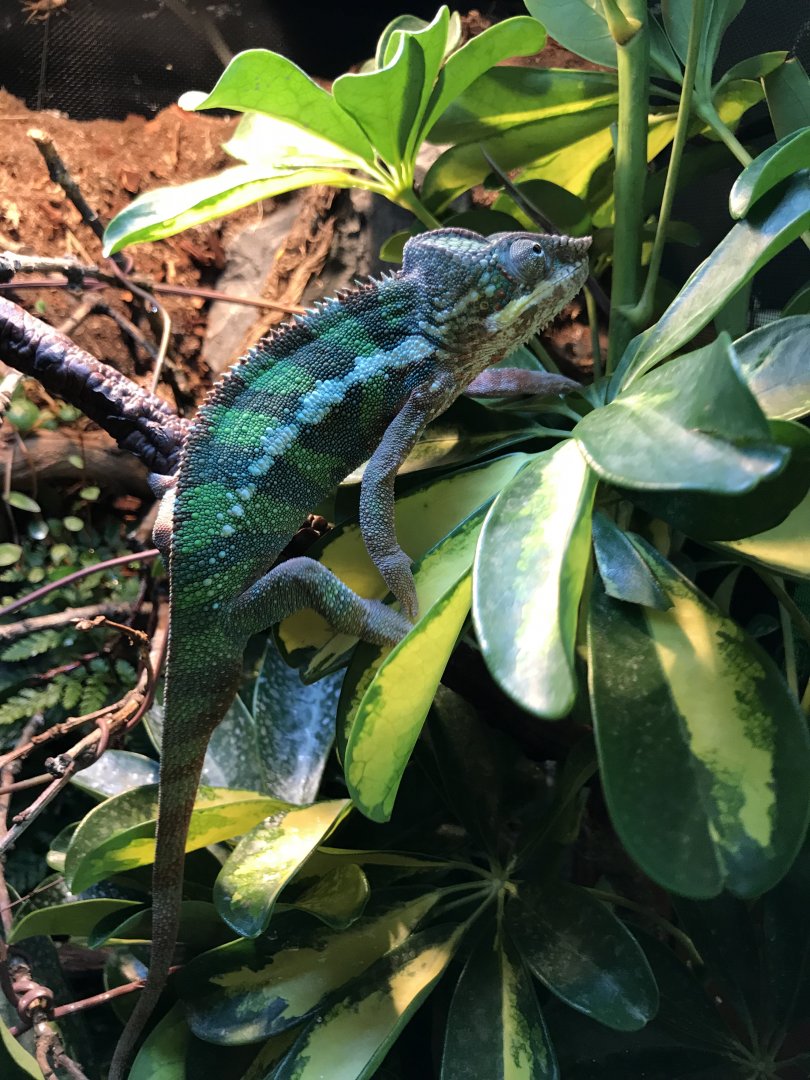 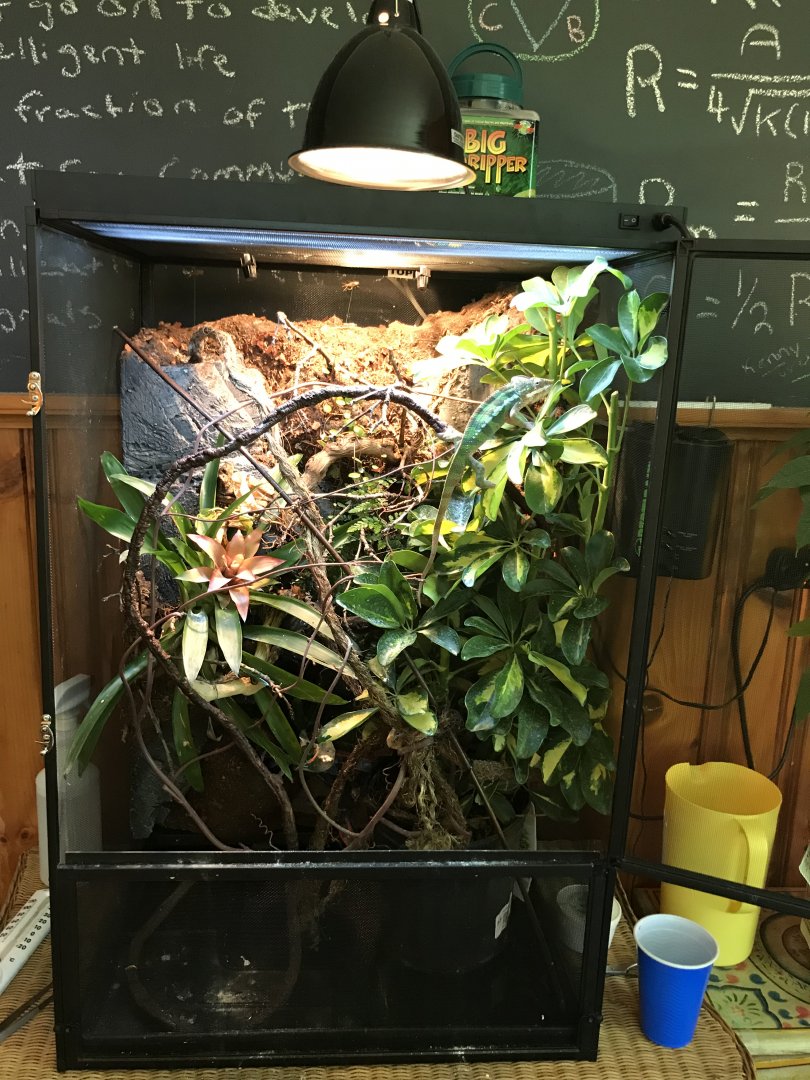 His birthday was 1-27-19. He sure seems to have grown fast and eaten a ton! Kids these days! Lol.

Did you hatch him?

Brodybreaux25 said:
Did you hatch him?
Click to expand...

No, but I spoke with my breeder about 5 different times waiting for him to hit 2 months, then waited for weather.

The breeder was Bruce from Chameleon Paradise. He really knows his stuff, and he mentioned something like these guys were growing quickly. Thats why he didn’t wait for them to be 3 months before shipping.

If you look at my earlier videos on Youtube, you can see my unboxing. That was roughly 2 months. His tuperware container had his birthday on it.

If you say so, guess he’s an early bloomer.

Brodybreaux25 said:
If you say so, guess he’s an early bloomer.
Click to expand...

He was a little bit larger then I expected when I received him. Since, he’s been eating like crazy and growing like crazy. He’s a lot larger now then I thought he would be. I can understand your skepticism.

4 months old.....he must have been the alpha of the whole clutch, there will usually be 1 or 2 that grow much faster than the rest

Lunatuck said:
He was a little bit larger then I expected when I received him. Since, he’s been eating like crazy and growing like crazy. He’s a lot larger now then I thought he would be. I can understand your skepticism.
Click to expand...

Well, back to your original topic.... since he’s so developed it is most likely his hormones driving this new behavior. He’ll calm down eventually but it’s going to take awhile...

Well... His clumsyness got the best of him. It looks like he lost two nails on one of his rear feet.

It doesn’t look terrible but I am watching it. Hopefully it didn’t take out then root and it’ll grow back. Cosmic still runs all over the cage screen when I enter the room. He hasn’t learned. Lol. 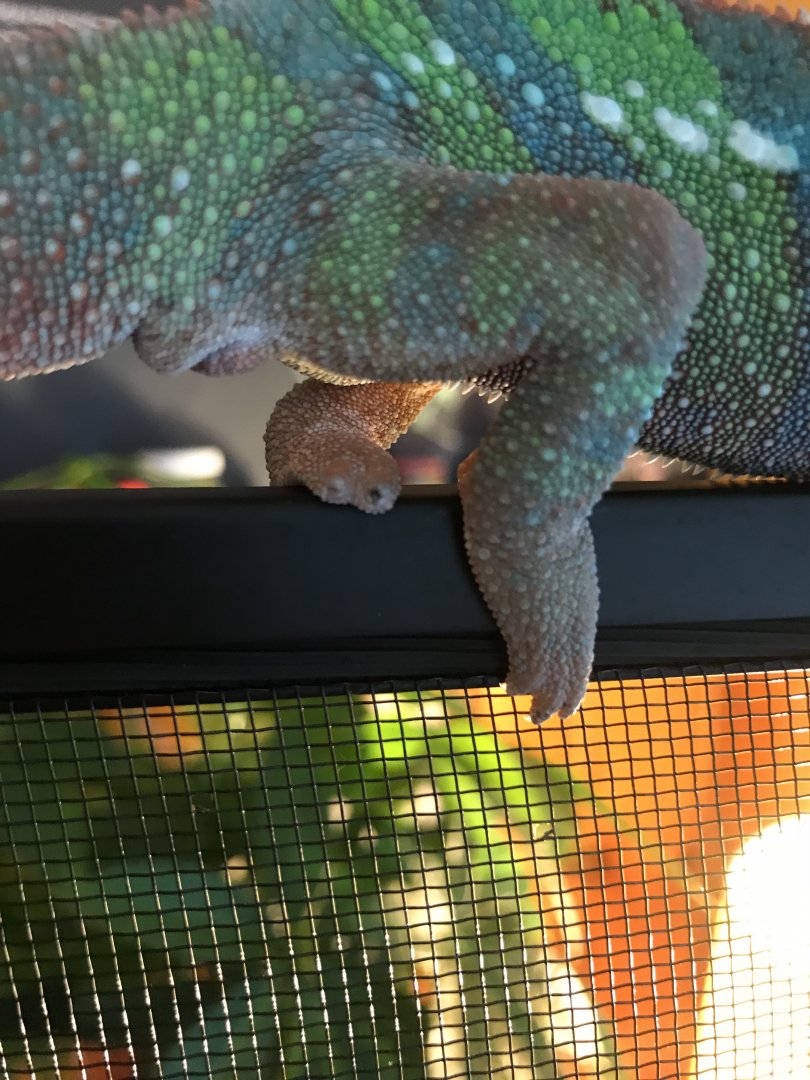 Should I be worried? Chameleon fell