This subject is more specific, health-related, and I was concerned might get lost in the other beardie thread...

Ol' Stinkeye hasn't given a ? in two weeks. It's not terribly unusual for adult (or sub-adult) beardies to go a week between, so it usually doesn't concern me; when he feels the urge to purge, he does. But this was pushing it, and he's been exhibiting some symptoms of constipation—hanging out in the same place where we open the door for the past 3 days. In retrospect, it may have been his way of trying to tell us he was in distress and needed help, but who knows? ?‍

This was not a case of impaction. Stinkeye's substrate is ceramic tile, and while there are live plants in the enclosure, they're covered over with river pebbles, and high enough up that he doesn't dig in them anyway.

Anyhoo, the usual prescription is a warm soak (~90°-95°F). Twenty minutes or less usually does it—a couple of tubfart bubbles followed by Whoosh! Then a quick warm rinse under the sprayer, a pat-dry, and he's ready to stomp Tokyo! ?

Not so this time. There are a couple of possibilities at this point: continue the soaks for a few days and hope things come out all right, administer some olive oil, call the vet...

bearded dragon constipation (Lots of good info in these links!)

...or a little trick I learned from a YT video, which I haven't been able to find since seeing it (figures ). Maybe someone knows the one I'm talking about(?) The trick is described in some of the links above.

After 30 minutes of unproductive soaking, I gently lifted up Stinkeye's back end, and massaged his abdomen, just above his cloaca. Suddenly he squirmed, and I saw that telltale lifting of his tail, followed by the inevitable.

It was healthy, but—what in college—we used to call a "Screamin' Willie"—the fattest turd I've ever seen come out of a lizard (and people on reptile forums are obsessed with posting pictures of lizard ? and here is no exception. Yes, I know why... yadda, yadda, yadda...) I am NOT going to post a pic of this one; in fact, I didn't even bother to take a pic, so cool your collective jets.

I expect the problem was caused by his not eating enough plant matter—he's more stubborn than a Labrador Retriever.
Or that we've been taking him out a lot for enrichment sessions, and that may have heightened his excitement levels—IDK.

I did want to pass along this little trick because it worked so well and so fast.

Sounds like you had fun! Have you tried that beardie salad dressing? It’s pricey but can’t be any worse than all the beardie salad that ends up in the trash.

Right now we're a bit preoccupied with setting up the cham enclosure, and Missus is investigating tortoises (torti? ). When I get a chance, I'll look up the "salad dressing" in the other thread or the archives.

What, no Bearded Dragon Hot Sauce?

I am upset you didn't get a video. Pics wouldn't have been good enough. ? 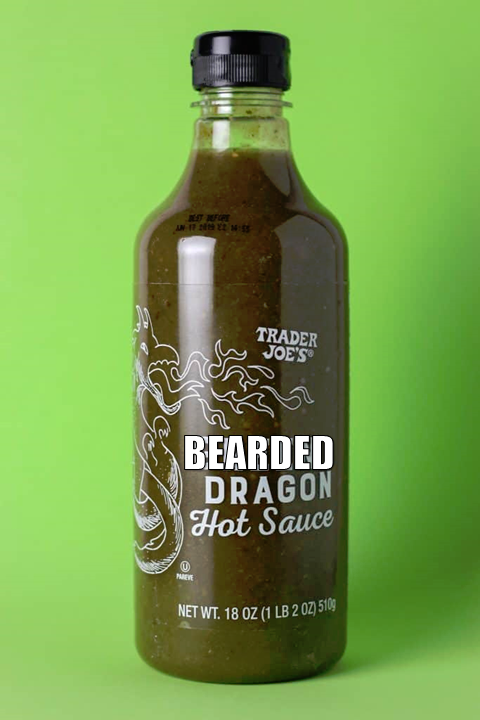 Bearded Dragons who need a new home one with MBD

May be in need of another vet visit
2

Urate has blood, poops are small
2