I bought a male veiled chameleon in March 2020 as a juvenile. He was never particularly sweet or social. But he also wasn’t aggressive. He has always had live food which he hunted in his 36x36x48 cage.

In January 2022, we bought a baby female veiled. She is super sweet and loves to crawl on us and eat from our hands. She is in her own cage of the same size. My male became instantly aggressive toward her. He tried to lunge at her cage for hours. I had to put a partition between the cages and he eventually stopped trying to attack her. Now he is completely indifferent toward her.

He has since become aggressive towards me. He lunges at me as soon as I walk into the room and will even slam his head into the plastic door to try to get at me. He tries to bite me during every cage cleaning. If any of my clothing gets too close while putting in feeders, he clamps down and refuses to let go. I have to remove the article of clothing, close it in the cage with him, and leave the room before he will eventually release it.

I’ve taken him to a reputable exotic vet and had scans and tests—everything is normal. Nothing has changed with his feeders, his room is temperature controlled, and his mister is on an automatic timer.

Has anyone else had this happen or know what is going on?

You shouldn't let them see each other inless your breeding and she receptive.
K

They shouldn't be able to see each other. It will cause them both stress. It's thought that even being that close to each other they can sense that the other one is there...possibly through vibrations and "hooting" that we can't hear. In the wild, they can move away from each other so they don't have to be in a stressful situation but trapped in a cage they can't...there's no way to escape.

His aggression to you could be because he's mature now.

A veiled male that is not aggressive is rare. How close are they together.

Wow! Your guy is taking aggression to an elevated level. I have one male and two female veileds and they have all seen each other at different times, but I’ve never had any aggression changes. If you are able to place them further apart or even in different rooms that may help. Or it might not…I really don’t know but it sounds like it’s worth a try. I realize it may seem like an impossible thing to get started on, but maybe trying to build/rebuild trust with your guy. https://www.chameleonforums.com/blogs/building-trust-with-your-chameleon.2396/

Staff member
Male veileds become extremely territorial. Females can as well. They should never see each other. You showed him something that he then felt he needed to defend his territory from.

Now on to the specifics so he started his aggression in the age range that is normal. That 1-2 year mark they are fully mature and ready to take on anyone and anything in their enclosure or near it. This is not abnormal. It is honestly a very normal reaction from a veiled. If he can visually see her at all then he will continue defending his space. But now you have become a threat to his space as well. So make sure he sits higher in the cage then you are standing. He should look down on you. Did you build your own enclosure? 36x36x48 is not a size that is made so I am guessing so. Make sure there is a solid panel between them and that their cages do not touch one another. You do not want him feeling any vibrations from her cage. Get yourself some leather gloves if you need to get in the cage. At least this way your hands are protected.

I have a wonderful Veiled but the second I am in his space he will become aggressive and my boy is quite tame for a veiled. It is all about it being their space. 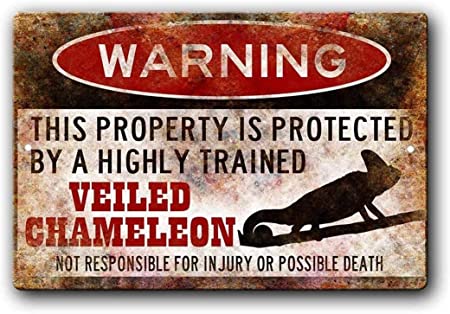 Okay, but I need one of those

so happy this could have been bad

O
How to keep humidity up
2

Pj colors after a long drink.