A question about the nasal passages and nasolacrimal duct

A while back i had a phone conversation with another member that stated a question i could not answer with 100%. For the life of me i can not locate a diagram of the Sinus/ocular/mouth anatomy. I also can not find any good literature stating how it works. Sorry for my lack of an understanding and questions in advance.


1. Im interested in knowing how exactly the nostril passage is positioned in the choana (if this is the proper term). Where are the passages/ducts located?

2. How exactly does the ducts connect to the eyes and are they also located within this same fissure? Where would these ducts also be located?

3. What other glands would drain into this area also?

I do remember a time when i was cleaning a wild caughts eye. The eyes were sealed shut. I squirted saline solution to open the eye lid and lubricate the eye. When doing this i noticed the chameleon swallowing. +Not from it splashing all over the face and running over the mouth.

On the other hand you have jacksons that can fill there turret with water. often pushing it against a branch to relieve some of the water. So is it possible not all species are created the same in this instance?

Staff member
Here's an excellent picture of the nasal openings into the mouth: 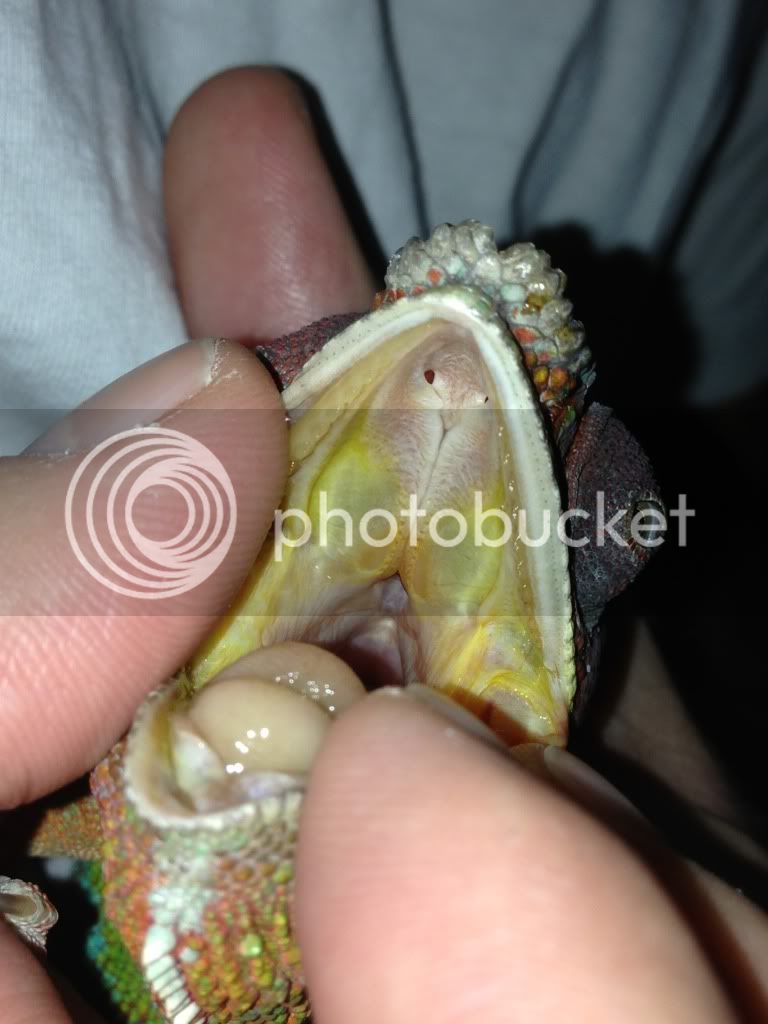 I've seen a good picture of the opening from the orbit into the skull that connects the two (nasolacrimal duct)...lemme see if I can find it.

Thanks ferret! That pic is good.

Couple more questions on top of the other 500

Is it called the choana slit? If it is..

Do you know if they can manipulate the choana slit?

Do you have any pictures that show behind the slit?

Staff member
Here's some literature for you with more info! The Structure of the Nasal Cavity of Chameleon Chameleon

Here's a simple version of how the duct connects from the orbit (where the eyeball is) to the nares (nasal opening). This would be on the inside of the skull. 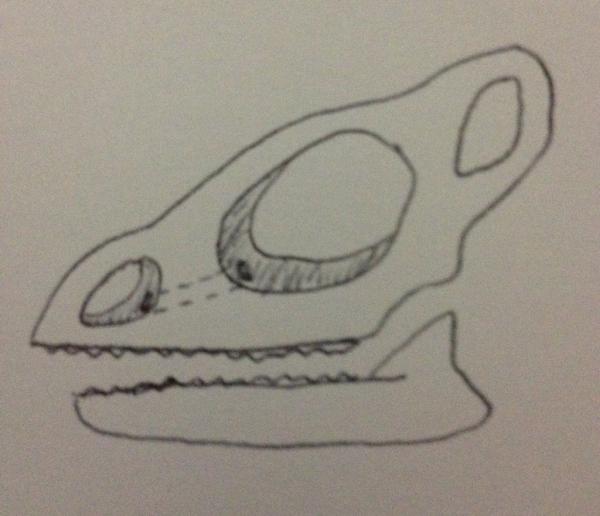 The choana is essentially the end of the soft palate where the nasopharynx meets the oropharynx. It's more pronounced in birds - it's a V shaped opening on the roof of the mouth. They can't manipulate it all because it's made of hard cartilage so they don't have any control over it. 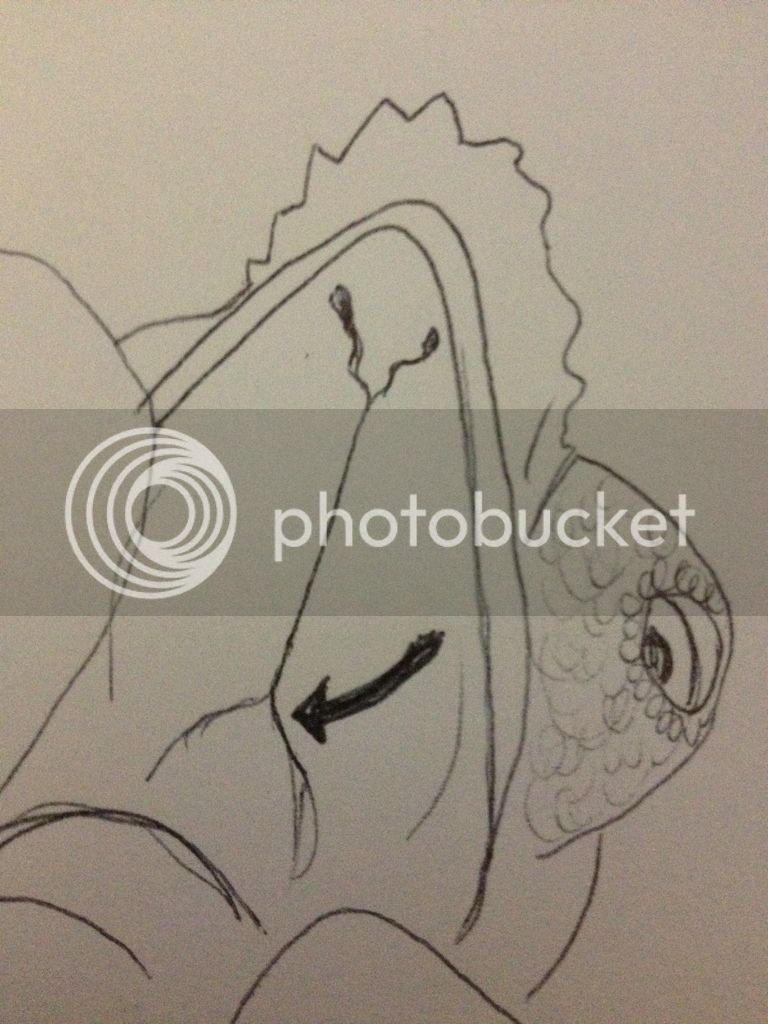 So below the palate/cartilage that ends in the choana is the mouth, and above is the nasal passages/sinuses. (I'll try to post an illustration of this later.) In dogs/cats you can see into those passages with a retroflexed endoscope - where the endoscope is turned backwards once it reaches the level of the throat. But chameleons are far too small to allow that type of imaging.

The nasolacrimal duct connects the eye to the nares (nasal opening), and the nares connect to the oral cavity as shown in xeonic's picture posted earlier. So if enough fluid flushes through that duct (like flushing the eyes) it can flush into the mouth, and thus you'd see swallowing.
Last edited by a moderator: Nov 16, 2015

You are all so clever. i will have to do some more reading thank you for all questions andanswers.

Thank you very much for the pictures and explanation. This info is great!

If the animal has turret swelling from lets say a sinus infection. Beyond attacking it with drugs. Is there a way to flush/clean the sinus cavity safely by a keeper?

Staff member
No unfortunately not. A nasolacrimal flush can be used to help try to clear out the duct, but that should be performed by a vet because you need special tools and can damage the eye if you're not careful. If there is actual pus from infection in the sinuses or around the eye it is difficult to remove because it forms hard blobs instead of being liquid like in mammals. So those are usually removed surgically.

Fascinating information. I have a parrot also, and I had no idea about the choana. Always great to learn something new! Thanks ferret!

Staff member
I'm about to post some pictures from a necropsy of a poor chameleon that died yesterday (not one of mine). I was able to explore the choana and sinuses in much better detail and can show where some of the passages lead. I've tried to weed out the really gross pictures but it will still be graphic. So fair warning! Read on at your own discretion!

oo! I love dissection photos, especially of animals I enjoy, from a scientific standpoint (chameleons and bowhead whales being my two favs, although the latter is hard to find pix of a dissection).

Alright, so this unfortunate veiled had multiple problems that went unaddressed for 3 months...so he did not make it. But he gave me the opportunity to demonstrate some of what I was trying to describe in earlier posts!

Here is his choana on the roof of the mouth, which was much more open than the panther pic posted before. I'm not sure if this was a significant abnormality, or if this was just a species variation. It's not quite like cleft palate I don't think because it didn't really open up the sinuses like cleft palate in mammals does. I'll see if I can get my pissy veiled to hiss at me and look at his later. 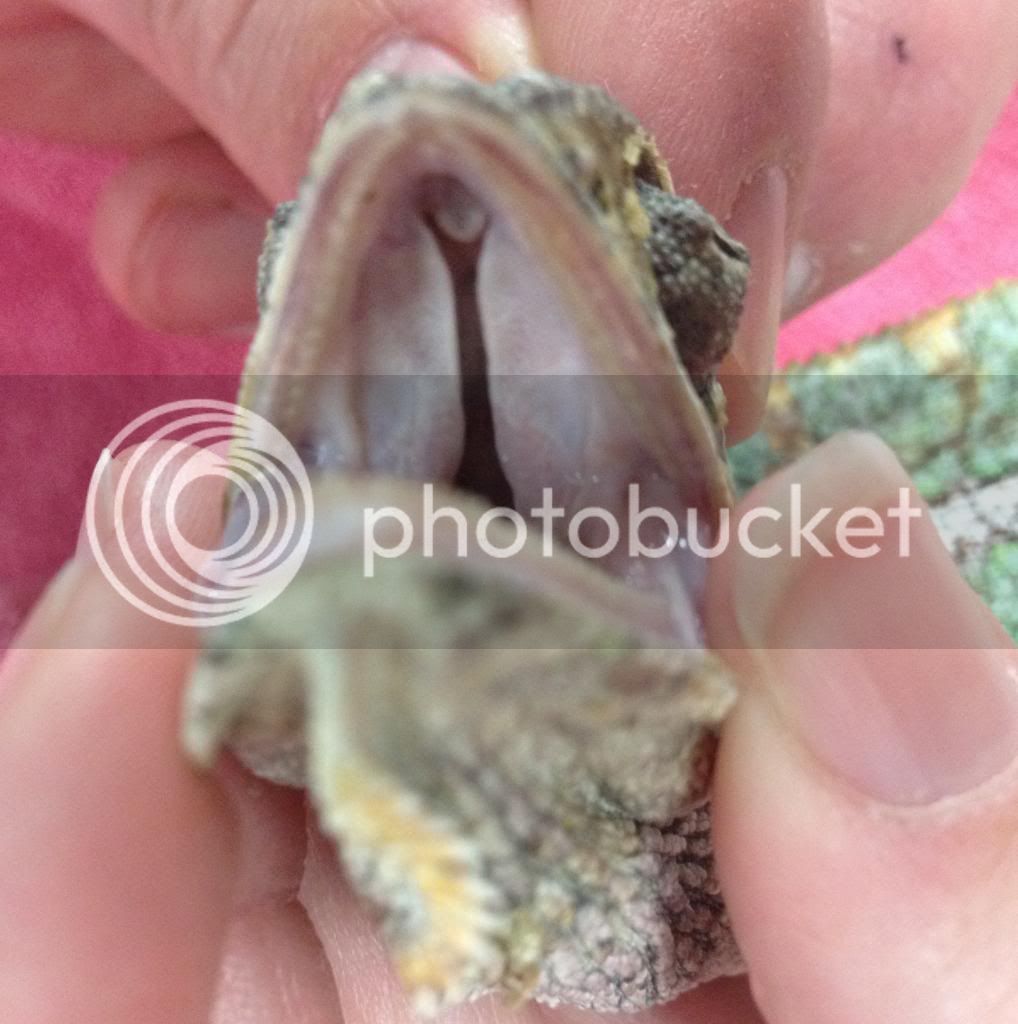 Now I've unhinged the lower jaw on one side so we can see the choana better. I've angled it so you can kind of see up into both sides. It's pretty much just an empty space. Not much there. This guy had very small nasal openings into his mouth compared to the panther pic. They may have been scarred down by the chronic respiratory disease he had as his nostrils were full of chunky stuff.

This is a very small catheter that was inserted through the nostril and led out the nasal opening into the mouth, as I was trying to describe. It makes sense that if an upper respiratory infection clogs up the nostrils then they will gape because they have to breathe through their mouth to get any air in. 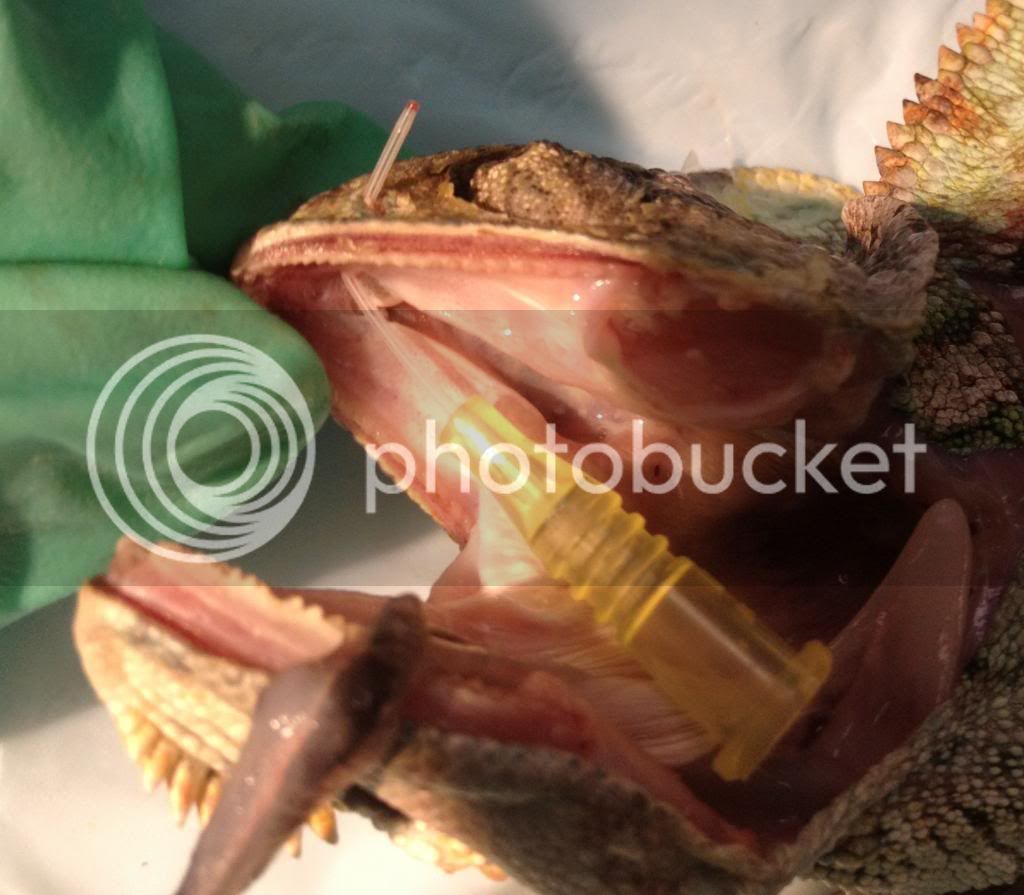 This is the catheter placed through the nasolacrimal duct! 'Lacrimal' means tears, naso-lacrimal literally means nose-tear duct. It was too hard to get a pic of the inside of the eye where the catheter went in, but it is basically the front bottom corner of the eye socket inside the turret. It was a fairly big opening as I had no trouble slipping the catheter into it. Getting it out through the nasal opening was harder, so it probably clogs toward that end when it does get clogged. The catheter exited through the nasal passage into the mouth, but there could have been a smaller passage that also led to the nostrils directly branching off of it. 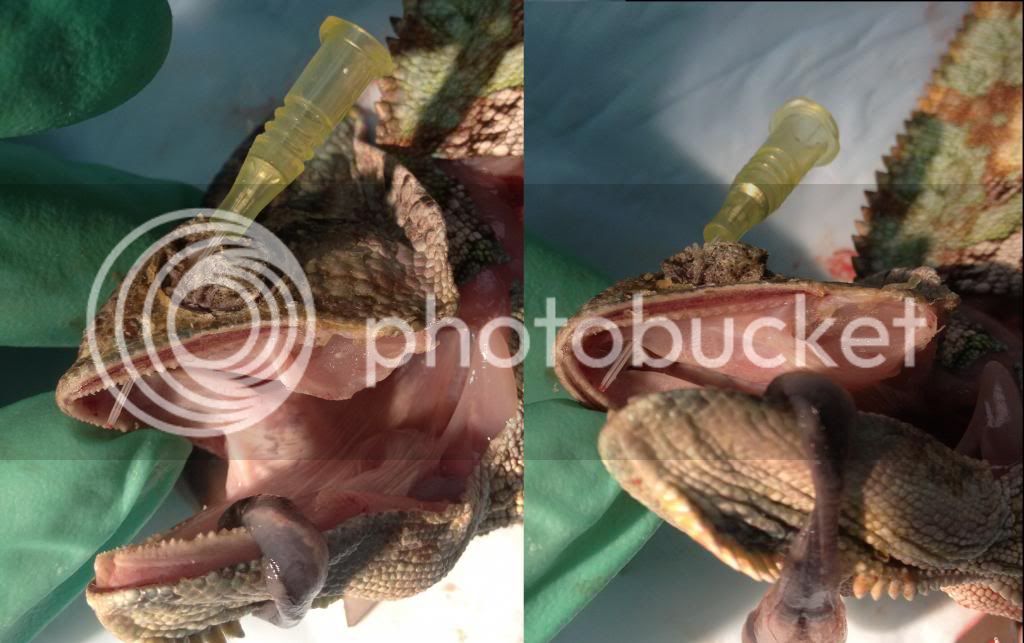 This was a cool finding. This hole is in the esophagus at the very back of the mouth, which can't really be anything else but the eustachian tube connecting the inner ear with the oral cavity! I tried to dissect down to find the inner ear structure, but it was too small so the tissue just looked torn up and I couldn't tell what was what. Just kind of cool to see that since they don't have any ear structure that we can see externally. 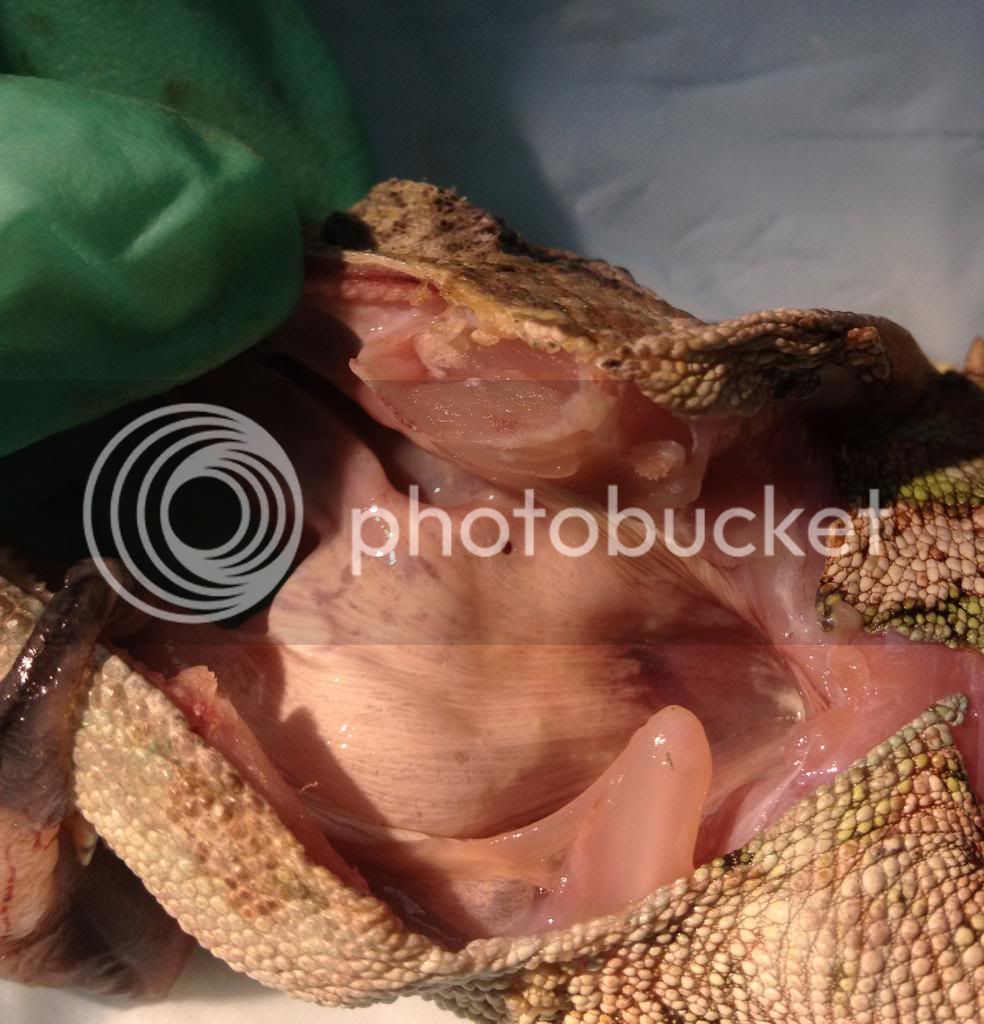 Let me know if the pictures are too hard to interpret and I can add some more labels. All of them are looking into the mouth with the nose to the left, body toward the right and upper jaw on top, lower on bottom. Feel free to ask questions if you have them.
Last edited: Jan 21, 2013

That is flat out amazing!~ Thank you so much for taking the time to do this for us ferret! It explains more than words could ever do. Finally for anyone searching something to look at and understand!

Now it will be a little more easier when examining where to look when trying to spot any possible problems. It is pretty amazing just how big the opening is to the eye. Never knew it was that large but it makes complete sense now why i saw drinking while flooding the eye.

Amazing! Thank you for sharing Ferret!!!

Thanks again! Really incredible and fascinating! A picture is certainly worth WAY more than a thousand words!

Besides being a community of great people, threads like these are why I love The Chameleon Forums! Thanks so much ferretinmyshoes for the great info and ataraxia for getting this thread started.

so, may I ask this - when Gail was sick, I had asked John if the bug juice was getting in her eye when I fed her- she would blow up her turrets, while eating the bug juice, do you think this could be part of the reason I had such trouble clearing her eyes up ? I was kinda confused as to what order to feed her- I ended up doing just water first, so she would do her eye maintenance w/ mostly water, but sometime she still did it while she ate the bug juice - do you think it was getting in her eyes ?
thanks again for such detailed pics -

Staff member
I suppose that it's possible that some could travel back up those passages, but I don't think that would necessarily be likely, or something that I would expect. If her mouth was completely full and there was enough pressure to basically force some fluid up those I guess it could, but I would expect it to come out the nostrils way easier than up that small, long passageway. Out the nostrils would be a bigger, shorter path of least resistance, and fluid follows the path of least resistance. Of course if there was some kind of abnormality of her passageways (mucous buildup or scarring of the openings) things might not have been functioning as expected. But if there was a primary problem with the eyes themselves then the increased pressure in her mouth from eating could have just caused the underlying problem with her eyes to bulge them outward without anything from her mouth actually getting into that area. There is a large sinus cavity under the eyeball where stuff can get stuck with infections, which is why they can be so hard to clear.
You must log in or register to reply here.

Possible tear duct problems, but I want your input.