What to do with new chameleon?

Well I just purchased a chameleon and this guy is not doing well. He arrived on Wednesday and right away I noticed that his bugle at the bass of his tail looked swollen. I wasn't sure so I didn't say anything, the next day I notice a little bit of blood on a branch and something sticking out of his vent. Here is the thread https://www.chameleonforums.com/should-i-worried-116581/ today there is blood all over the place in his cage, the breeder says I can send him back and if he arrives alive he'll refund his purchase price. He is always very dark and I could only imagine he is under quite a bit of stress and with the loss of blood I'm worried he won't make it back.

Now the question, do I take him to the emergency vet or wait until tomorrow. Can a vet do anything for him or should I just wait? Please let me know what you think. Thanks

Take him to the vet and find out what's wrong. That way you can relay this to the owners. They do not have a bad reputation at all and I'm sure they will help you. Obviously at this point it doesn't matter who's to "blame" as much as it is about saving the chams life. Please make sure your vet is a herp vet otherwise you are wasting money. Where are you located ? We can try to help you find a good vet

Do you think it can wait till morning or should I try to find a emergency vet that takes reptiles? I'm just worried that he might get very expensive sub-standard care at an emergency vet, if I can find one. I'm in CT.

That does not make sense that the breeder expects him to arrive back to him alive when he obviously sent you a sick chameleon in the first place. It's not like you abused or neglected him and that is why he is ill. I agree, I think I would get him to a vet. I think shipping him back in that condition might be the end of him.

carol5208 said:
That does not make sense that the breeder expects him to arrive back to him alive when he obviously sent you a sick chameleon in the first place. It's not like you abused or neglected him and that is why he is ill. I agree, I think I would get him to a vet. I think shipping him back in that condition might be the end of him.
Click to expand...

100% agree
Sorry you have to deal with this, I looked at the pictures of the other baby you had and it does look like pretty advanced edema.
In my expirence you can call a herp vet and pay after hours call out fee. Which is usually anywhere from 130-250 an hour. Just call and let the office know a brief description and that you need the earliest time slot tomorrow.
Can you also post pictures of the blood in the cage?
Is it brightly colored or dark?

I haven't had him long enough to neglect him. I sent him the pics in my other thread and he suggested that the lights are too close to the cage and that might have been the cause. I just don't see how that would be possible, it's only a 40w bulb and its not like the bulb itself was on the cage. You can touch it and its comfortably warm.

It sounds like you are dealing with a an issue that is not your fault. This is no way would be caused by lighting and either happened during shipping or prior to. You have to really fight for what is right here and understand that you had no fault in this. I would take this as far as you can and be sure that the breeder is held responsible.

edit: and of course, he will need to see a vet, I dont think he can go back through the mail like that.

I didn't buy from him blindly, I checked out his reviews before hand. He seemed to have a good reputation so I felt comfortable buying from him. I didn't expect this at all. He replaced the first one with the edema, I was understanding, sometimes things happen, but now this?

Here are a pic of the blood 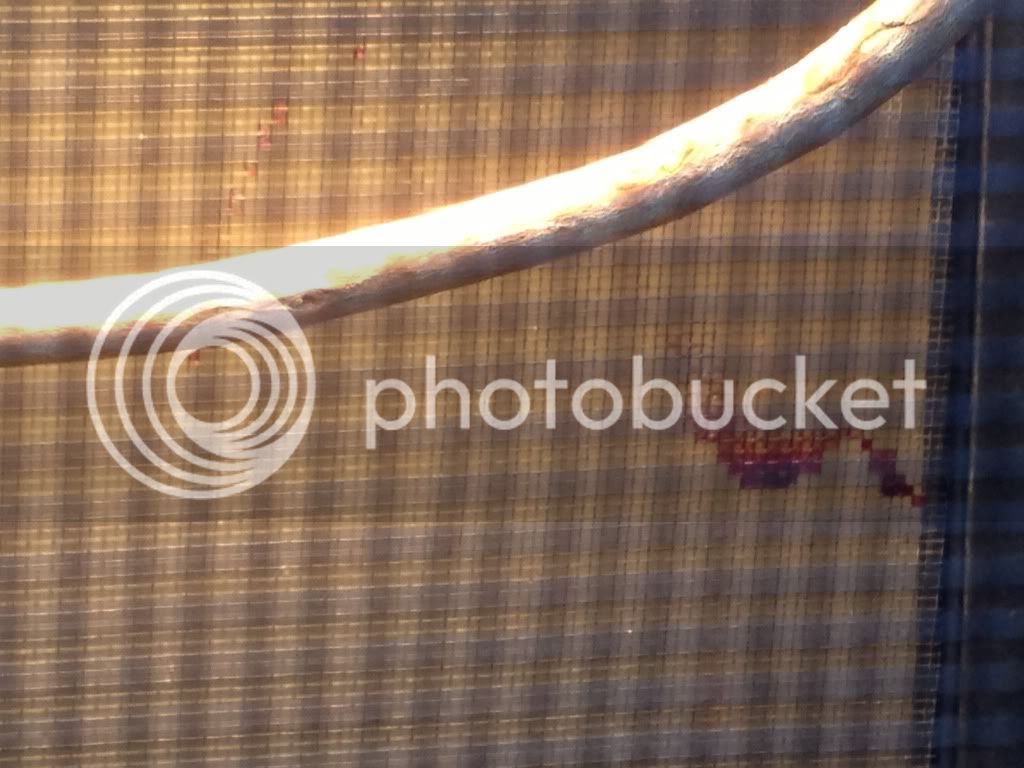 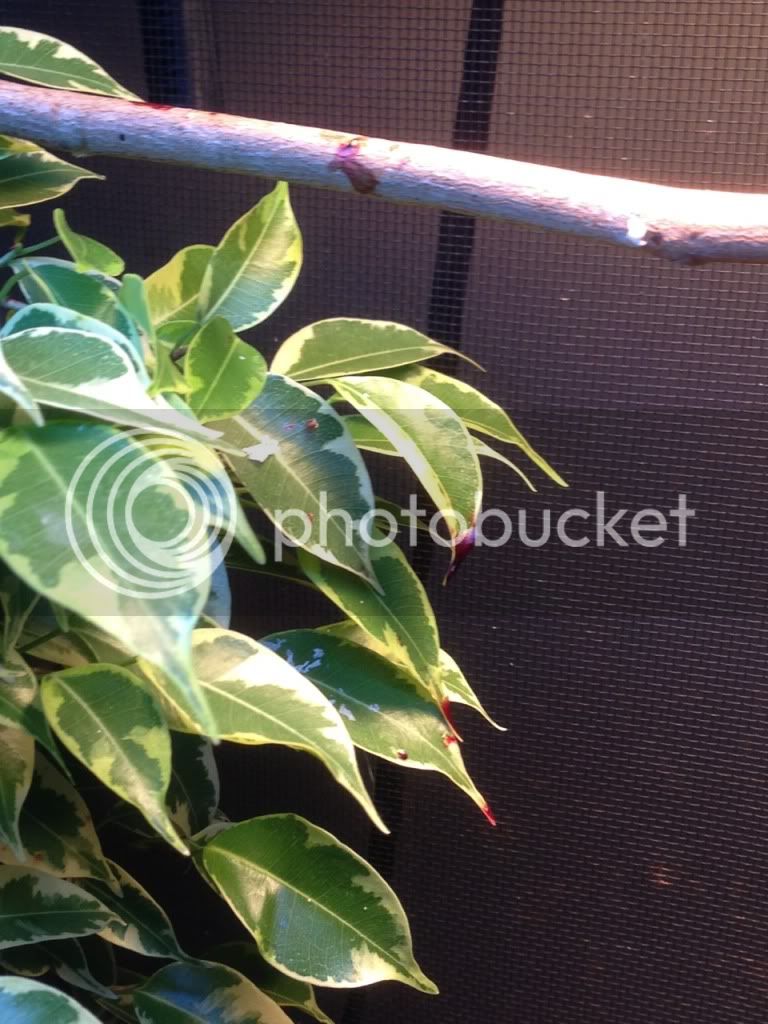 Wow...
And you sent them these pictures ?

I sent the first one but he didn't even comment on it, at this point it's just a pissing match and I don't think I'm going to get any further with them. He hasn't responded to my last email. The last correspondence said to send I'm back and if he arrives alive he refund the purchase price. I'm going to take I'm to the vet first thing in the morning and see what happens.

That's a very responsible action. Besides everyone knows you shouldnt ship a Cham on Fridays

That looks like something's very wrong with his hemipenes. Honestly there is no home diy care for that. You have to get him to a vet.

They said they were already
K

Can you post a better photo of whats hanging out of his vent please.
The bulge at the base of the tail looks large. Could be infected or might even be gout.
If it's his hemipene or a prolapse it needs to be kept moist with KY jelly until you getting to vet.

Wow, you've been put in a bad situation, I hope the vet can help you and your new guy out. Good luck my friend.

Well, just got back from the vet. She believes that it is the hemipenes protruding from his vent and also agrees that his bulge is very swollen. She advised to put neosporin on the exposed part to keep it moist. The breeder did suggest the same in a email that I didn't see until this morning. I have to bring in a fresh stool sample so that they can check for parasites and she sent me home with an anti-inflammatory (metacam) and an anti-biotic that will also deworm (metronidazole) but not only if he worsens or if they find something in the stool sample when I bring it on Monday. She feels it is either parasites causing him to strian when passing his stool or some kind of trauma that cause the hemipenes to become swollen and exposed. I'm pretty sure after today the Cham hates people, he bit the vet tech and tried his hardest to bite the vet so doing anything with him is going to be very difficult.

As for the breeder I think that if this was the first issue it would have gone much smoother but Being the second go around I think there was resentment on both sides that made this whole thing go sideways the way it did. In the end I've had a Cham that needed a vet visit after three days of owning him, I still need to go back for the stool sample and maybe a recheck and that is if he bounces back from this and all goes well. This breeder has good reviews and his prices are great but in the end this Cham will be more expensive that any other breeder out there and I'm pretty sure I won't have much in the way of breeder support down the road.

I'm glad you got into the vets. This is also why I advise first time Cham owners to not buy from Petco or petsmart. They aren't always unhealthy but its really a hit and miss because chams are good at hiding what's wrong with them.

After a little more correspondence with the breeder he's trying to make it right and I'm sure we can agree to something that is fair for both sides. I guess it's true that cooler heads prevail. While I'm a little nervous about the rough start, I'll be keeping him and hopefully I can bring him back to 100%.
You must log in or register to reply here.

Is it a prolapse? What should I do?

R
Panther Chameleon has been very sick for 4 weeks and no improvement with many vet visits.
2 3