Story of the Chameleon I took from the store without paying!!!!!

Wow! So nice to hear a story with a happy ending. You guys did a great job!

Thank you everyone for the kind words, I'll keep y'all posted with pics in the near future.
view our sponsors

WOW. She is gorgeous now.

I'm so glad to hear this precious little girl was rescued and saved by you and your girlfriend. Keep up the good work
G

I just talked to a petco sales rep. This type of thing is not uncommon, they do it with many animals that have special needs or are not in good shape. They for instance have a hamster that's blind that can be gotten free for a home.

They have an abundance of chameleons...5 in one cage all 4-5 inches long 4 males. They are 50% of because someone ordered young ones.
What worries me is people will buy them now at a cheap price and not really care. If it's$100 they are more apt to be responsible 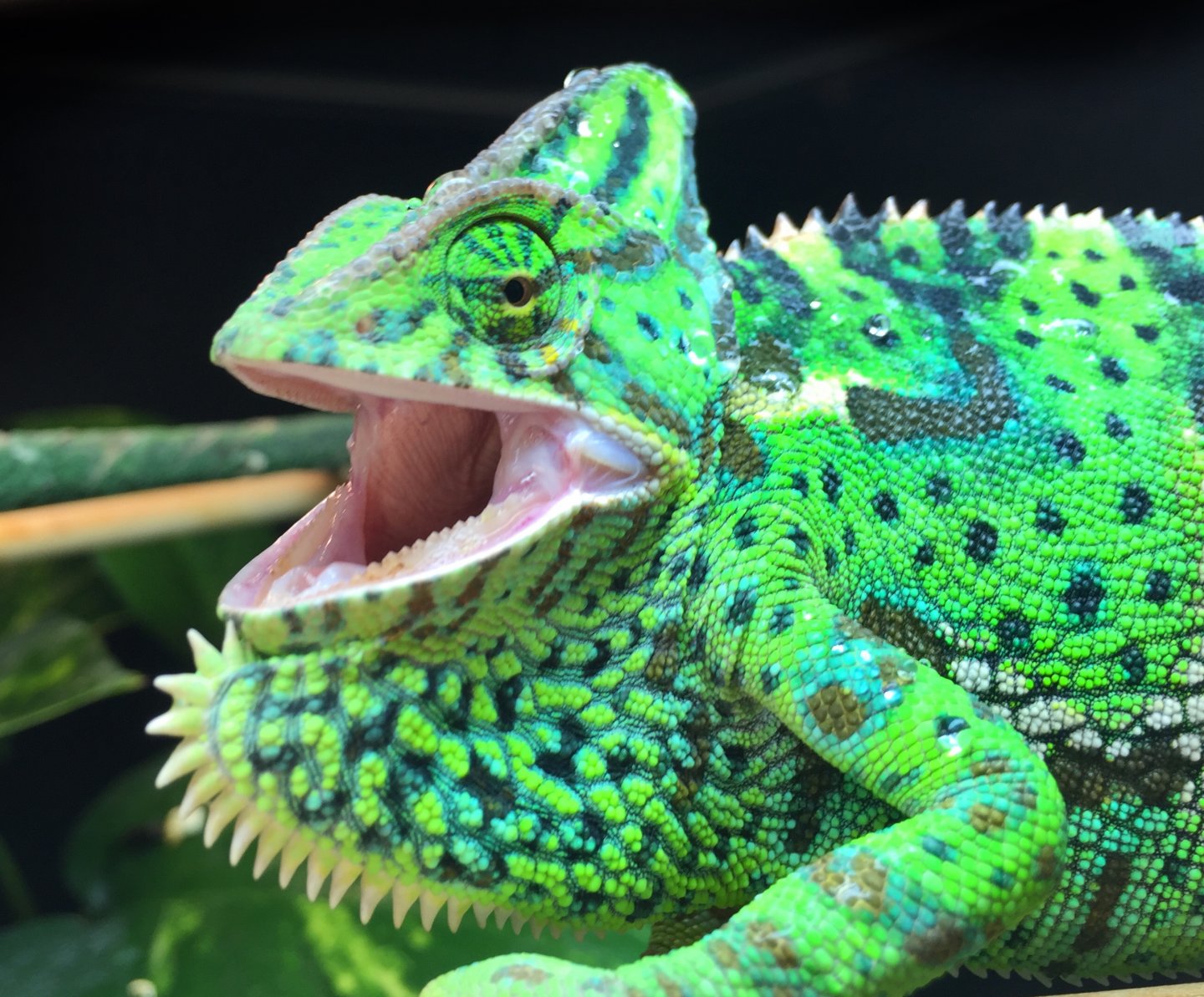 Man she is angry. Beautiful but angry! Nice picture by the way. What camera are you using I have a Nikon D60 and they don't come out this nice? Of course I'm sure the subject helped a lot.

That's one nice photo for an iPhone.

She look so great, back story aside! Knowing what you all went through to get her here is all the more impressive! Well done and thank you from me, her, and I'm sure everyone else on here for helping a little girl in need!

JoCarp said:
She look so great, back story aside! Knowing what you all went through to get her here is all the more impressive! Well done and thank you from me, her, and I'm sure everyone else on here for helping a little girl in need!
Click to expand...

Thank you, that really means a lot!

Wow! She looks awesome! What a lifesaver you are! Kudos to you both!!

She looks fantastic!! I love her colors. Well done!

She's still sassy and don't like hands near her unless there is a worm on it. Funny she will settle down once she's is on your hand. Just getting her there is the trick. But after what she went through I don't mind her being sassy.

Lazereth said:
Here is a little story about our little veiled chameleon.

Back on Oct 5th I needed “emergency crickets” for my chameleons due to me running out before my shipment arrived. So my girlfriend (Amanda) and I went to Metspart (I can’t use their name due to an agreement I signed, but i'll touch on that shortly and I truly hate going there). On the way there I had to use the restroom real quick, so we entered the store and I walked straight to the restroom. I came out to find Amanda staring into a small tank with a veiled chameleon inside, she looked at me and said “OMG” about 5 times. I then peeked inside and I couldn’t believe what i saw, a veiled chameleon that had retained shed all over the wrist and tail. I quickly grabbed my phone and took some pics.
(In-store) 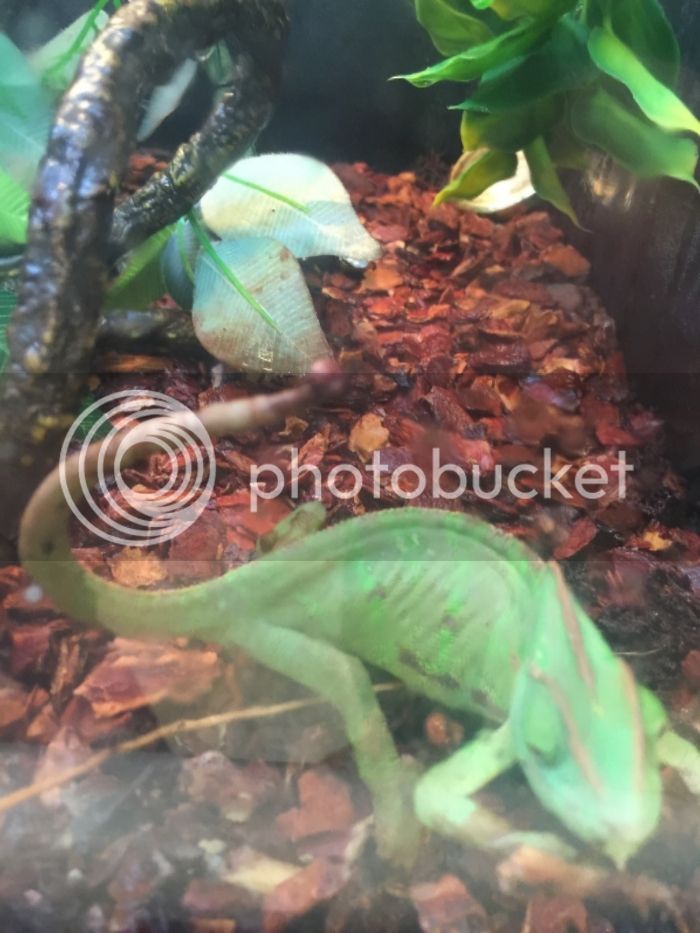 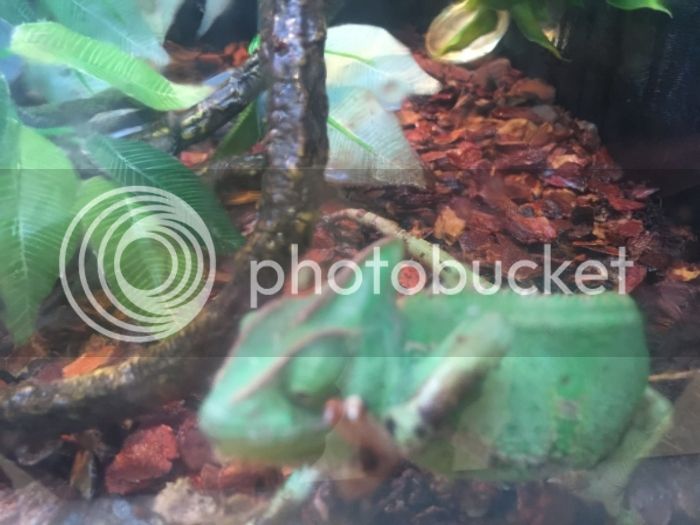 Her tail looked so bad with a ball at the end which you could already tell she has lost some of the length. We walked away to get some crickets (Amanda is almost in tears after seeing this) I told the young lady who worked there, I needed 200 crickets. So she started counting them out one by one, at which time I asked, so what are you doing with that Veiled? She immediately said “he’s going the vet tomorrow”. He? I told her "He" is actually a girl! Anyways, so I started asking more and more questions, like then why is “He” still out there with a price tag on the tank? After about 10 minutes of my questioning her she admitted they didn’t have an appointment set yet and she was planning on getting one setup soon, I told her there is no way she will make it before then. I then asked to speak to the manager, she went and got him. He came up to me and asked "What can I help you with?" I told him get a box, I’m taking her home now! (Amanda’s jaw about hit the floor.) The manager just stared at me not sure what to say, I then said don’t worry I’m not paying for her, but I can’t leave here knowing you guys are killing her. He then nodded at me and told the girl to go get a box. He stepped away and brought me a form to fill out and sign stating I will not disclose the circumstances of the chameleon and not use their name. Really weird to have a form like that readily available. I asked him how old she was and the manager said 1.5 years. At that moment I knew his cheese has slid off his cracker. So we got her home and gave her a bath to try to remove some of the shed before I put her to bed for the night. Luck for us we had plenty of extra equipment to give her proper housing. The veiled was not happy to say the least, even at the store she was nipping at me, but during her bath she started to calm down and I was able to hold her and work more on the shed. They were multiple layers of shed on her. She had to be in so much pain.
(Soaking her and helping the shed that was built up) 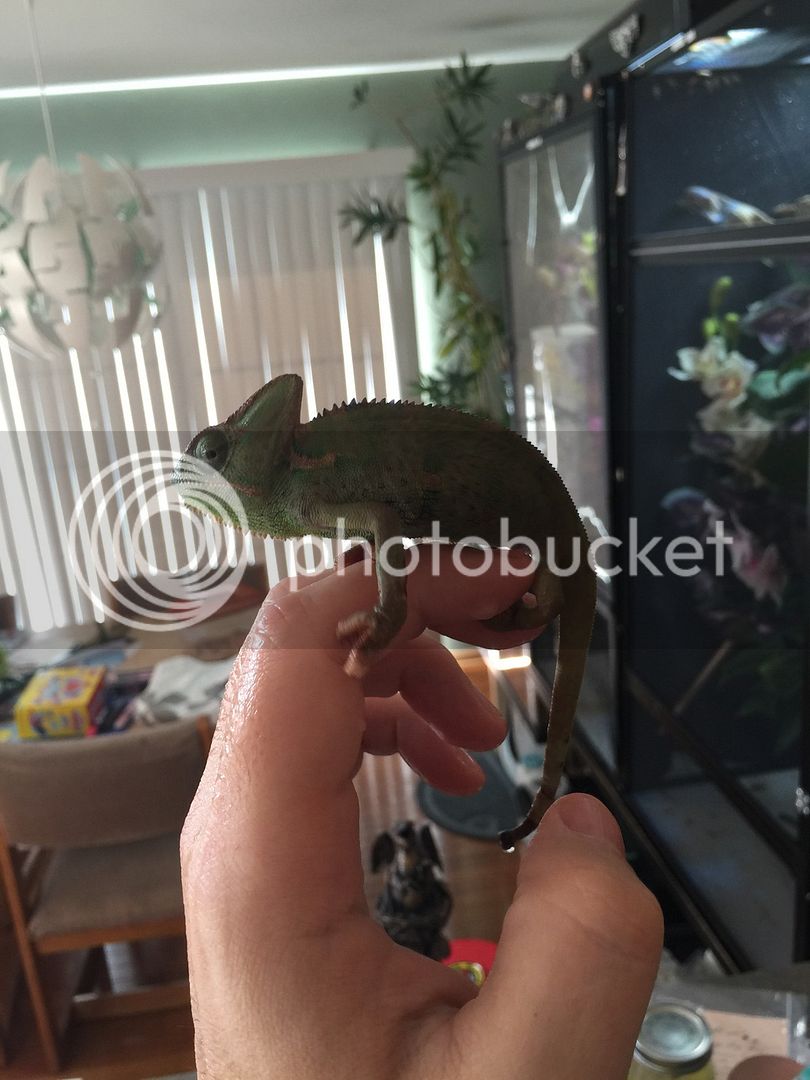 When we brought her home Amanda and I discussed re-homing her if we are able to get her well again. She had a LRI, an eye infection, retained shed and over all didn’t look to good. Heck she wasn’t even able to coil her tail.
As we went to put her into her new home for the night Amanda looked at me and said “I love her” which was her way of tell me we aren’t re-homing her.
(She fell right to sleep, still more work to be done with the shed) 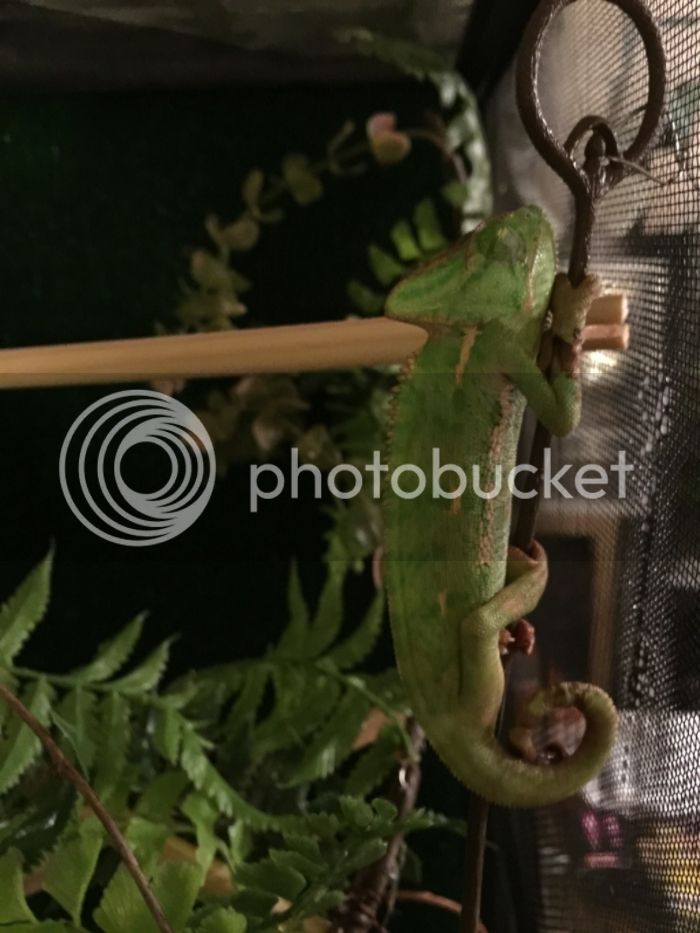 After countless hours we are proud to say she is a healthy sassy girl now.
(Her home is at the far left) 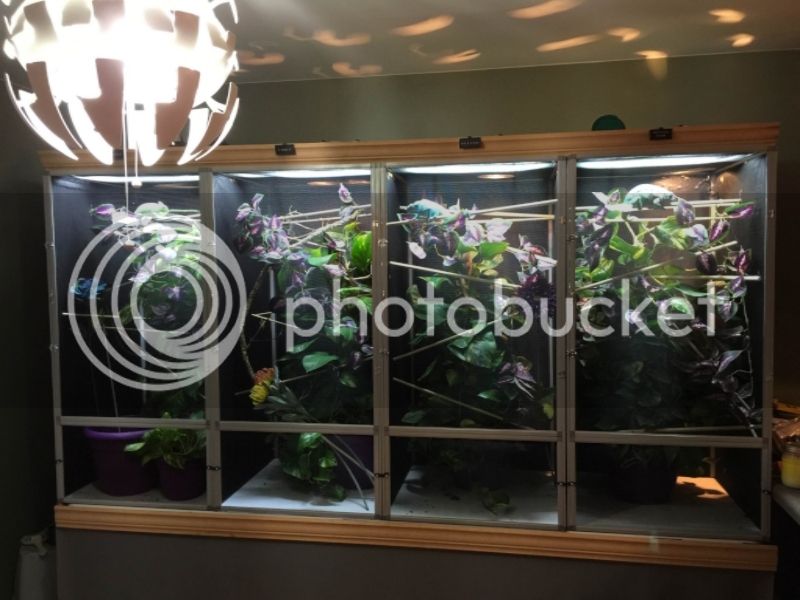 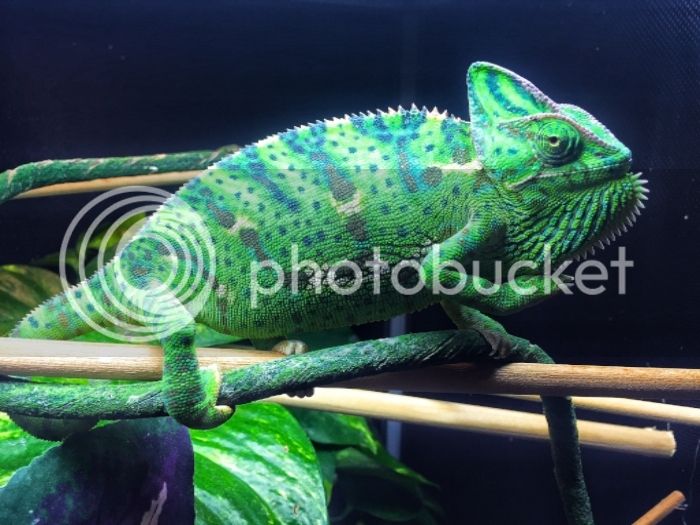 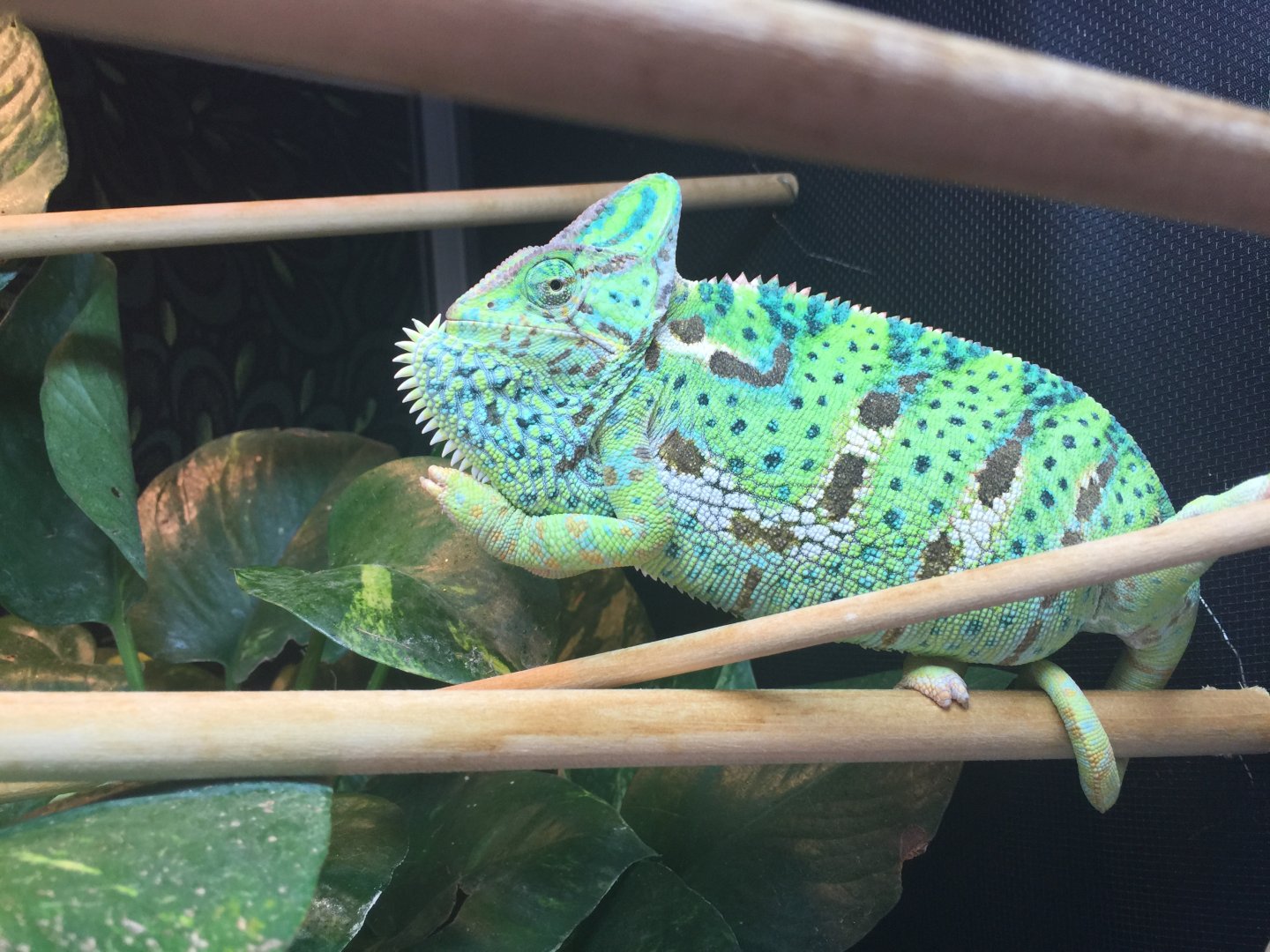 Little update. She's still sassy but is healthier then ever. Her tail hasn't seen to ever stop or slow her down. Love this little girl!

I used to work at a petsmart and I always here these stories about people who assume the people dont know much or anything about these animals.

Maybe it was just the ones that I worked at but the people that I worked with kept all the animals that they had for sale as pets outside of work.

We used to take great care of our animals once they got to the store. The issue is they (MetsPart) buys so many animals that its hard for all of them to be healthy.

We had a local vet that we would take all our animals to if they were sick.