In the Yellow-Created Jackson’s Chameleons, the sexes differ in many features from each other. They show the s.c. Primary sexual dimorphism, which is expressed through the presence of sexual glands (testes with ductus deferens in males and ovaries with oviducts in females) and copulatory organs (hemipenes in males, hemiclitoris in females).
The problem for sexing animals is, that some of these organs (first group) are situated in the body cavity and some (the second group) in special pockets at the base if the tail, none of them are invisible from outside.
There is a technique how to evert the hemipenis, but in young animals and in animals which are dehydrated, old or out of breeding season, it does not work reliably, plus, it might be painful for the animal and is definitely rather stressful, especially if done by an inexperienced owner, therefore not recommended.
Fortunately, there are several Secondary sexual characteristics, that allow us to define the sex rather reliably, especially in adult animals:

CRANIAL HORNS The male possess three big true rostral horns up to over 2in long, directed forwards while the females remain hornless. On the analogous places, where in males horns grow from the canthi rostrales, pointed tiny conical scales might be present in females. Extremely rarely, also one-horned females occur (2 in history).

SIZE The males are much bigger than the females, they can reach up to 17in / 12in resp, usually stay much smaller

TAIL BASE Due to the presence of male copulatory organs, hemipenes, the tail base behind cloacal is thicker/swollen in males

DORSAL CREST The conical scales on the dorsal crest are relatively much bigger in males and are usually of yellow color, while in females the are
Smaller and resemble usually in color the surrounding skin

COLORATION The excited males are usually of green to yellow color on the body, with dark green to dark blue casque and cheeks and light blue tail base while females are colored usually more conspicuously, either with a pattern or uniformly reddish brown, or grey or green. Females colored similar like excited males are known from Hawaii.
For reliable sex determination, rhe horns are a good guidance in all ages, even fresh born males have already tiny horns.

Table
The left column relates always to male, the right to females It shows the differences(top down) in:
General habitus
Head form and horns
Tail base
Dorsal crest 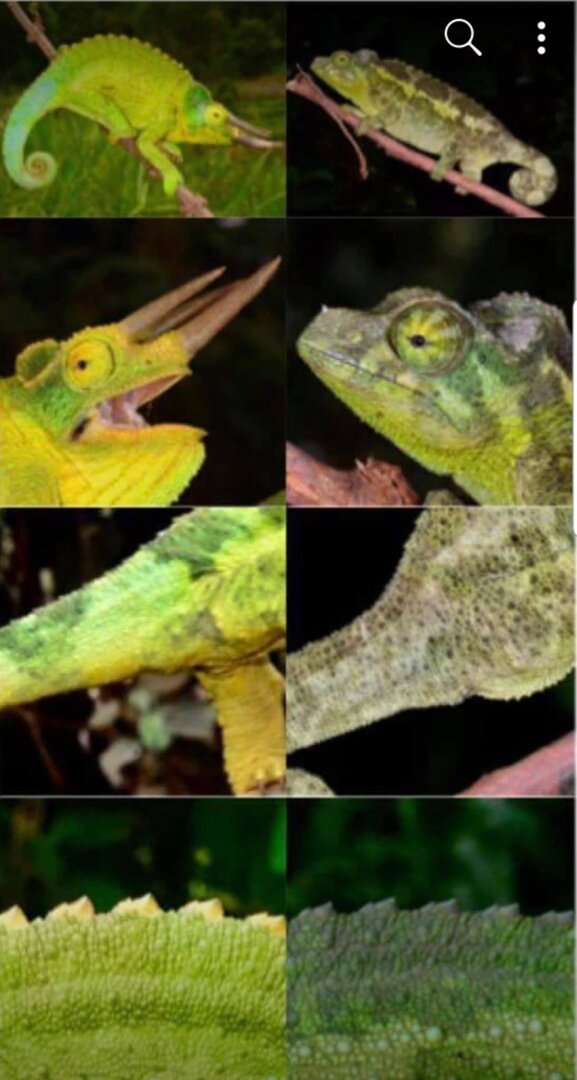 Staff member
Are you going to do jacksonii jacksonii also or am I going to have to argue with people about my girls really being girls even though they have horns?

JacksJill said:
Are you going to do jacksonii jacksonii also or am I going to have to argue with people about my girls really being girls even though they have horns?
Click to expand...

Staff member
He's written something on it I'm sure.

"Trioceros jacksonii jacksonii
Common name: Nairobi Three-Horned Jackson’s Chameleon
Taxonomy: This form can be encountered in the pet market, but is rare. Usually it is the form from Macha- kos Hills that is brought in due to the vivid colors.Range: Central Kenyan Highlands from Nairobi to southern & western foothills of Mt Kenya.
Sexual dimorphism: Males have three horns, females three or one"

"Trioceros jacksonii undescribed form “Machakos Hills”
Common name: Kenyan Jackson’s Chameleon, Rainbow Jackson’s Chameleon, T. j. “willegensis”Taxonomy: This form represents an undescribed subspecies. It is, at this time, officially grouped under T. j. jacksonii. This colorful form was introduced in the pet trade under the name T. j. “willegensis”, but this name was neither official nor even grammatically correct.
Range: Machakos Hills and Ol Donyo Sabuk
Sexual dimorphism: Males have three horns, females have three or one"

From an old post of mine...
https://www.chameleonforums.com/thr...ii-and-trioceros-jack-jack-willegensis.33679/
Francois LeBerre said...
"John van Willegen is the guy who is collecting and selling them. He calls
them after his name, and I refer to them as "rainbow" Jacksons.
The oldest pic I have of this one dates of 1965, so it is not so new... And
true, they are smaller than the C. j. xantholophus with whom they interbreed
(but I did not manage to get F2, yet), and females have 1 to 3 horns, and
sometimes none."
You must log in or register to reply here.

T. cristatus, an impromptu Q and A with Mario Jungmann PART 1