I’ve had a Panther chameleon for almost 9 years - he is amazing!
He has a 2x2x4ft screen enclosure with devils ivy plants and an exo terra monsoon misting system.
He gets misted for 2 minutes, 4 times a day.
He has a dripper that he happily drinks from.
His basking spot is set to about 30 degrees and he also has a Reptisun 5% uvb bulb, changed about every 6 months.

I have recently decided I’m going to get a male Jackson’s chameleon, however both enclosures will be kept in the same room.

Is the research I’ve done correct and the only real differences in both chameleons care is that Jackson’s need extra humidity at night and Jackson’s need a slightly cooler basking spot in the daytime?

Any advice on how to keep the humidity in one enclosure higher than the other at night?

Would a setup, similar to the one outlined above be ok for Jackson’s?

Staff member
Night time humidity can be raised by adding an ultrasonic cool mist humidifier directed into your Jackson's cage and wrapping 1-3 sides in plastic to contain the humidity. I run my humidifier 4-5 hours a night. Your panther wouldn't made a boost in night time humidity but won't need as much. They also need cooler night time temperatures as low as 60˚F or 16˚C. Panthers can tolerate this as well as long as they get their daytime heat.
You may also want to add longer hand misting to make up the extra hydration requirements.
I'm sure you know they have a lower requirement for supplements and a panthers schedule would be toxic for them. "As a montane species (native to higher altitudes) Jackson's have decreased supplementation requirements compared to tropical species due to metabolism differences. Use calcium (without D3 or phosphorus) twice a week, a multivitamin once a month, and calcium with D3 once a month."
Hope that helps here is the care sheet. caresheets/jacksons/
R

Thanks for the great info! Some of that stuff I knew, had or do - I just forgot to mention it in my initial post! I’ll be sure to get a humidifier for nighttime humidity. Is there a humidifier you recommend? A silent one would be ideal as my reptiles live in my bedroom! Thanks

Staff member
I figured you knew but some wouldn't And I never want to take that chance. Tao Tronics make some nice humidifiers. Just don't get one with a bit in timer you will want to set a start and stop time and it will interfere.
This one is good for one or two cages. 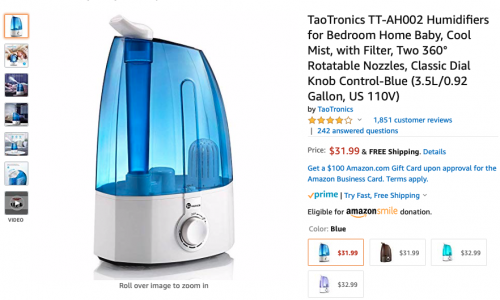 Thanks for the recommendation? Is it relatively silent?

Staff member
It is very quiet, more so than my Vicks that I run on other cages but it is not silent. It's far more quiet than any fan.
R

Thanks for your advice and info. Can’t wait to get my Jackson’s! I’m in the middle of moving house and got him on hold until then....hopefully it won’t be too long!
You must log in or register to reply here.

Jackson’s not eating, smacked his lips
2