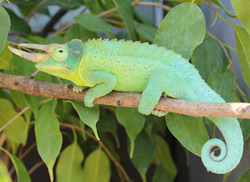 
Difficulty: Intermediate - These chameleons are for more experienced keepers. They have additional husbandry requirements that can be difficult for people unfamiliar with general chameleon care.


Description:
The Jackson’s chameleon is a medium sized chameleon with an adult length of 10-13” (25-35cm). Though smaller and less colorful than other common species they are easily recognized by the male’s three prominent horns, which give them a prehistoric look. Males and females are predominantly green in color, though females can appear a rusty brown color and may have a darker green irregular pattern when stressed. As a montane species (native to higher altitudes) Jackson’s have more unique heat, humidity and supplementation requirements than more tropical species due to metabolic differences. Interestingly Jackson’s do not lay eggs but instead give birth to live young!


Behavior:
Like most chameleon species Jackson’s chameleons are tree-dwelling reptiles that are active only during the day. They can generally be found hunting prey or basking on the branches of trees and large bushes. Contrary to popular belief, chameleons don’t change color in a direct attempt to match their background. Their color changes are influenced most by their state of health, emotions or level of stress, and the process of thermoregulation. They are territorial and do not tolerate the presence of other chameleons in close proximity, despite the common myth that Jackson's can be housed communally. Like other chameleons they are a pet that is more for observation and should not be handled regularly.

Male Jackson's chameleons can be differentiated from females by the three prominent horns on their head. T. xantholophus females do not have horns, or have only one very small horn at the tip of the nose. Click images for larger versions. 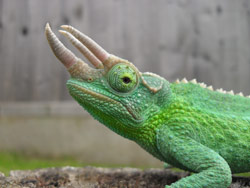 
Humidity:
Humidity is an important aspect of chameleon husbandry. Jackson's chameleons require levels around 60-80%, which can be achieved by several misting sessions a day over all areas of the cage. Live plants help increase and maintain humidity. Sometimes a cool mist humidifier or timer-controlled misting system is needed. See Water & Humidity for more information.


Cage Size:
In general when housing chameleons, bigger is better. Jackson’s chameleons are highly territorial and easily stressed by the presence of other chameleons, even of their own species. Two or more Jackson’s chameleons should never be kept in the same cage. Cages should be furnished with many plants and climbing branches to provide opportunities for exercise and plenty of places for hiding. Substrate (mulch, soil, etc.) should not be used in chameleon cages. See Chameleon Enclosures for more information. 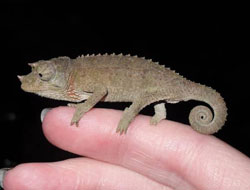 Feeding:
Chameleons are insectivores meaning they should only be fed live insects. Great feeder insects include crickets, silkworms, hornworms, butterworms, dubia roaches and superworms. Waxworms and mealworms are high in fat content and harder to digest so should only be used on occasion. The rule of thumb is to not feed insects that are longer than the width of your chameleon's head.


Supplementation:
Calcium and other vitamins are very important to your chameleon's health. Feeder insects should be lightly dusted with powdered supplement before being fed to your chameleon. As a montane species (native to higher altitudes) Jackson's have decreased supplementation requirements compared to tropical species due to metabolism differences. Use calcium (without D3 or phosphorus) twice a week, a multivitamin once a month, and calcium with D3 once a month. 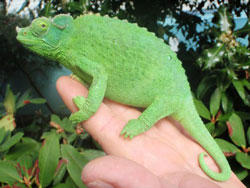 Egg Laying & Breeding
Interestingly Jackson's chameleons do not lay eggs but are viviparous (give birth to live young) after a 6-9 month gestation! Since they do not lay eggs a laying bin does not need to be provided. They can however drop "slugs", which are the membranes and yolk around an egg was never fertilized. A single breeding may produce several clutches from the same pairing due to sperm retention by the female. A few weeks before giving birth the female will usually have decreased appetite or stop eating and become restless. Average clutch size is 7-30 young. The young are born amongst leaves and branches wrapped in a membrane that they need to break open once born. Neonates should be immediately removed from the cage with the mother as predation on the young has been known to occur. The males are born with small nubs where their horns will grow in the future. Babies reach sexual maturity at about 9 months of age.