Staff member
My sweet Oscar is 5 years old and suffering from gout. When he was younger he went through a long period (over a year) of not wanting to drink by any conventional methods. For a while he would only drink in the shower, then only outside from the sprinkler, then only if water dripped on one leaf in particular, then squirt bottle, etc. I had to keep switching it up to keep him hydrated and even resorted to injectable fluids at times until he finally decided that drinking from a syringe was acceptable. 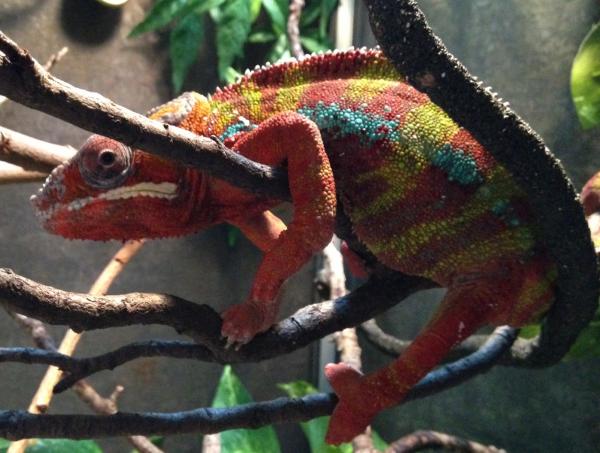 Earlier this year I started noticing that he was letting his front legs dangle off his branches more than usual, so I did bloodwork and X-rays. His bloodwork was all normal but there were some areas of mineralization around his elbows. Gout causes uric acid crystals to build up either in the tissues or the joints. Oscar's elbows do not extend fully straight anymore because of it. As you can see both front and back left leg are just hanging over a branch and he's leaning on that vine to try to take weight off his legs. 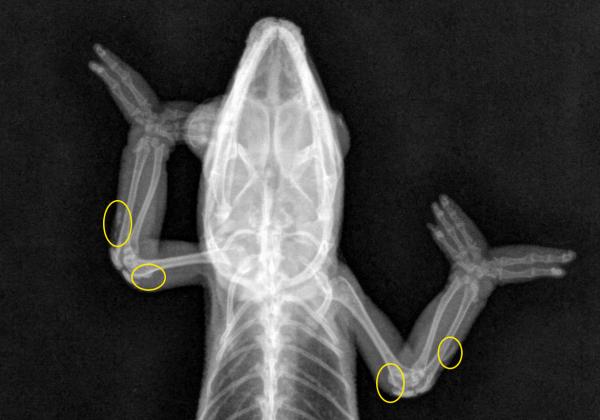 The main reason I'm posting this is to help others recognize signs of pain in chameleons. Unlike in mammals, symptoms of pain in reptiles can be very subtle. Oscar otherwise was eating great, crawling around, getting excited to see Loretta, and looked normal. All he was doing was dangling his legs when he was resting instead of gripping with them. A chameleon will do that from time to time normally, but this was more often than not by far. Swelling of joints is classic for gout, but not always present.

I started him on pain medications and you can tell it makes him feel better because he stopped dangling his front legs. Unfortunately you can't fix gout, but you can delay it with extra hydration to help the kidneys out.
Last edited by a moderator: Nov 16, 2015

Wow very cool post. Thank you for the expert advice on this. I hope Oscars condition doesn't progress.

Thank you Dayna for sharing Oscar's condition and X-rays with us. I hope his gout progresses VERY slowly. I think not staying well hydrated is a problem for allot of chameleons. As you know, I'm very hands on with mine and interact with them daily and it is amazing to see how much water they can drink and how long it takes them to start drinking and then for how long they can drink once they do get started.

My daughter had a female panther with gout years ago and the vet recommended watery foods like silkies and horn worms. She was also prescribed, Allopurinol, to help decrease the fluid/mass in her joints along with a pain killer. I'll be keeping you and that sweet little Oscar in my thoughts.
K

Every time I've seen one of my chameleons dangle a leg my first thought is gout. Along with the swollen joints its a dead give away sadly.

Hope Oscar does well for a long time.

I'm so sorry to hear about your Oscar I can't imagine the fear you must feel. I will be keeping you and him in my thoughts <3 I agree with feeding silkies and hornworms to hydrate him really well. Just because I know if I see my Ryker a little dehydrated I will feed him some extra silks and he's back to normal. Especially with the heat like it's been in CA. I hope everything progresses very very slowly with your little one, and I hope everything stays ok for you for a long while. Good luck <3

Thanks for the information, ferret. Oscar is a pretty boy.

Yes, thanks for posting Dayna. I have a question....How could bloodwork be normal and gout be present? Wouldn't the uric acid level be elevated from the gout? When Romeo had the gout in his knee his bloodwork showed very high uric acid. BTW Oscar is so beautiful and I am glad you are on top of things! He is lucky to have a mommy that is a vet!

jannb said:
Thank you Dayna for sharing Oscar's condition and X-rays with us. I hope his gout progresses VERY slowly. I think not staying well hydrated is a problem for allot of chameleons.
Click to expand...

Thanks Jann! It is one of the most common problems with captive reptiles in general, and especially with chameleons.


Andee said:
I agree with feeding silkies and hornworms to hydrate him really well.
Click to expand...

Thanks Andee! Yes horns and silks are common commodity around here when weather is agreeable for shipping. When he's being stubborn about drinking again he gets a lot of them. I just put in an order for some more yesterday...I have way exceeded my bug budget for the month already...


ataraxia said:
Thanks for the information, ferret. Oscar is a pretty boy.
Click to expand...

Thanks ataraxia! I think he's gorgeous.


carol5208 said:
Yes, thanks for posting Dayna. I have a question....How could bloodwork be normal and gout be present? Wouldn't the uric acid level be elevated from the gout? When Romeo had the gout in his knee his bloodwork showed very high uric acid. BTW Oscar is so beautiful and I am glad you are on top of things! He is lucky to have a mommy that is a vet!
Click to expand...

Excellent question Carol! I did bloodwork first, and since it was normal I figured gout wasn't the problem, so I did x-rays looking for arthritis next. But the mineralization outside the joints is most usually gout. Dr. Alfonso was kind enough to take a look as well and he agrees it is most likely gout. For there to be mineralization that means that at some point the uric acid levels were high. But they may have come back down to normal by the time I did the bloodwork because he had been drinking really well for me. Hydration alone can be a huge help with this disease and flushing uric acid out of the system. But once the mineralization forms it can take a very long time to go away, if it does at all, even when levels are normal. And it causes pain once it forms. Allopurinol is given to try to reduce the levels of uric acid in the bloodstream and prevent further mineralization from occuring. But since his levels are not high there is no need for allopurinol at this time. I'll recheck his bloodwork this winter and see where he stands.

Yesterday was a particularly bad day for him. I had him out while I was cleaning crickets and making ff cultures (man his kids can eat!!!) and he kept slipping off his branch on the counter in the kitchen. I actually caught him as he fell all the way off the counter fortunately!

Staff member
It doesn't keep him down at least! We had a "Reptile Awareness Day" at my clinic so people could come learn about basic reptile care and know I was there to help if their reptiles ever had problems. And of course, to see cool reptiles! I brought in a few turtles, the geckos and Buster and Oscar, and a friend/client brought some snakes. Oscar was of course a social butterfly as usual. He was even shooting crickets for everyone. Buster was a good sport for a little while but he got stressed after not too long so he was retired back to his travel cage. 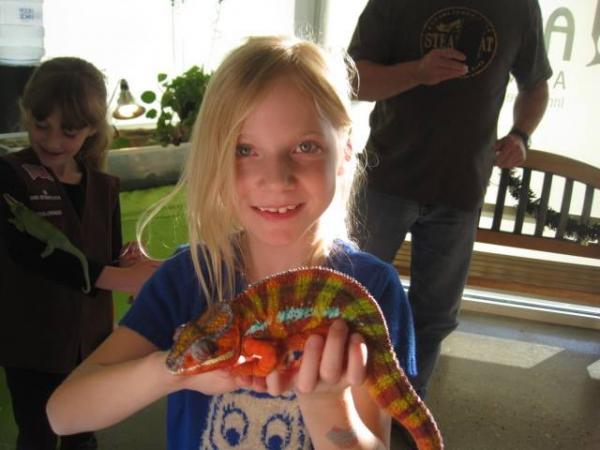 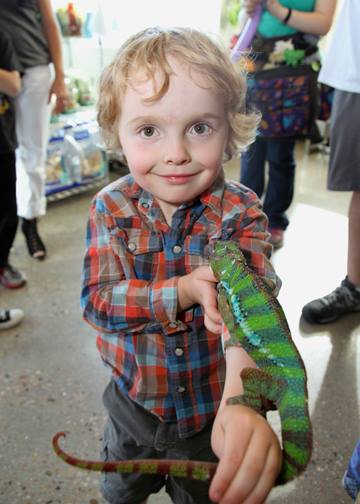 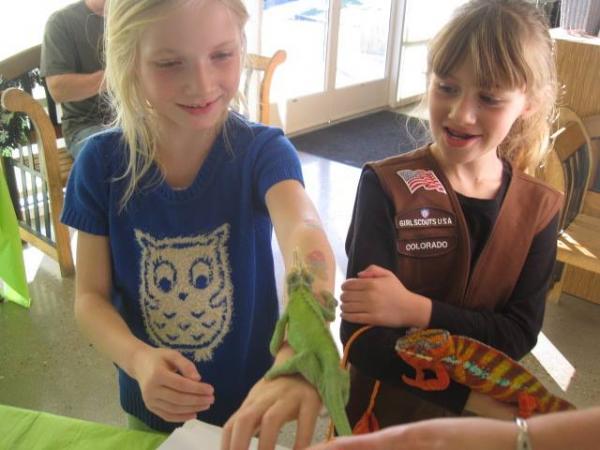 I love my receptionist's face in this one! 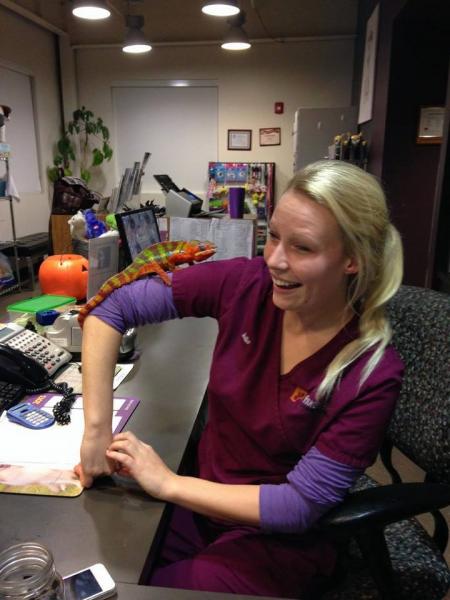 It's really nice to see Oscar and Buster out and about socializing and educating.
You must log in or register to reply here.

chameleon not using back legs