Hello I just got my first chameleon about three days ago. I was first told he was a veiled chameleon and that was what I was going for and did a lot of research for. But when I got him back home it turned out he was a panther (thank you to the one who sold him to me misidentified) so I've been doing a lot of research for his species, but having some troubles. Mostly because when I bought him I also bought the guys set up but it turns out that it was full of mold so it was pretty much thrown out and the back up terrarium is now being used. We could keep his lights but as it's a glass terrarium I'm having some trouble with the basking and uvb temperatures.
The room has in get a bit cold at night so someone said to keep a night heat light on for him, but when I woke up it looked like he was severely overheating so I turned it off, but I'm concerned about what I may be doing wrong.
If someone could help it would be appreciated... we do have some greenery for him and a branch, I added one of the vines this morning before I went to work and was planning on adding the other one later as I was worried he got himself up on some greenery without a way down so he was stuck.
Any help is appreciated thank you

buy a reptibreeze XL
Buy a 22" zoomed T5HO hood with the reptisun 5.0
Buy some repashy calcium plus LOD

That should cover 99% of the setup. You can decide how to hydrate and get your basking setup in order ( i recommend a halogen wide flood at an angle for sub adults, and just a "house" bulb near the cage for babies just to make a mid 80's area)
S

Thank you for a response. I used up most of my budget for a while on getting him new plants to walk on, but how long can I keep him in the glass terrarium? We do have mesh cages down stairs, but they're too small as the guy just took two mesh cages and turned them on their sides and hot glued them together for the terrarium. Would you have a recommendation on what to do about this situation? I'm worried at this point I'm doing a lot of wrong by this guy

No lights at night. Ever. If the cage goes below 55*F use a ceramic heat emitter to bump the temp up around the mid 60*F mark. Temperature drops at night are good for their metabolism.

For supplements, use what nightanole suggested. Repashy Calcium plus LoD lightly on all feeders plus a good, natural gutload will cover a good part of the nutrition.

Add photos of the current set up you are working with so we have a better idea for suggestions.
K

@Sbath where do you live?

Congratulations on the new addition to the family! Don't stress about it too much, once you dial it all in, it will be a breeze! If you are looking for a new cage, the screen cages are great but I have seen some fantastic converted cabinets that make the coolest most functional cages.

Apologies for being so late, I was at work and couldn't take any photos. He's moved since I pit the vine in so I'm happy about that. But heres what I've been able to put together for him.

I live in new Brunswick canada if that makes a difference

The top is glass too?
S

No the top is mesh. I added a vine this morning and hes livened up a lot now. I was able to hand feed him so I feel a lot better about his possible health at the moment. My family and I are looking into the proper mesh cage but it would be a couple of weeks before I get it. I'm in the process of adding the second vine so I'm hoping that helps a lot more
S

Lots more vines, sticks and other climbing things, a real plant or two (Pothos are excellent). One of the members says empty space is wasted space. Give your cham lots of little roads to travel on. No need for the mat or eco earth. Unless you’re going bioactive, Bare bottom is best.

Can you post a pic of your cham?
S

Okay thank you for the bottom situation advice. I just finished adding the second vine for him so I'm letting him adjust to that and I'll take a pic to post
S

Hes in the pic I posted up in the basking area. I'll take one of him when he settles down from me adding the second vine
K

When people live in cold climates or even if they have airconditioning in their houses...there is nothing wrong with using glass cages with mesh lids and those little vent panels in the front side of the cage. I live in Ontario and have used these cages for years. In the beginning (30+ years ago) I used glass cages that only had screen lids...and it was no problem.

As @MissSkittles said.. A bare bottom is best.
S

kinyonga said:
When people live in cold climates or even if they have airconditioning in their houses...there is nothing wrong with using glass cages with mesh lids and those little vent panels in the front side of the cage. I live in Ontario and have used these cages for years. In the beginning (30+ years ago) I used glass cages that only had screen lids...and it was no problem.

As @MissSkittles said.. A bare bottom is best.
Click to expand...

Okay, that makes a lot of sense that the climate would probably take a change to what cage type I used mostly because it's almost winter here and it gets cold. Thank you for cluing me in to that. But the glass terrarium is 6 inches to short and half an inch too narrow... is that going to make a lot of difference? Its something I'm concerned about
S

Heres a pick of him just after I turned off the basking light, I forgot to snap one of the second vine, but I snapped this one before I turned off his uvb as I'm heading to bed. I might be able to grab a better one for him tomorrow

Mulberry and oak branches are free 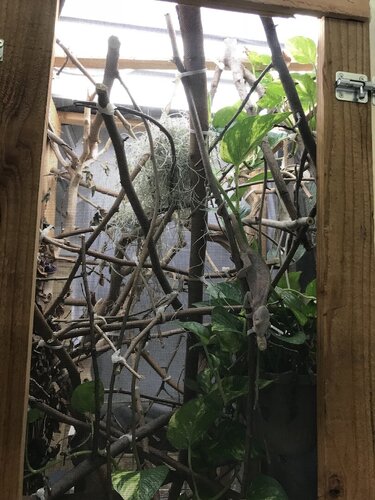 Sbath said:
Heres a pick of him just after I turned off the basking light, I forgot to snap one of the second vine, but I snapped this one before I turned off his uvb as I'm heading to bed. I might be able to grab a better one for him tomorrow
Click to expand...

Not really able to distinguish much, but I think that’s a really cool pic. Perfect silhouette against the lovely greens.
You must log in or register to reply here.