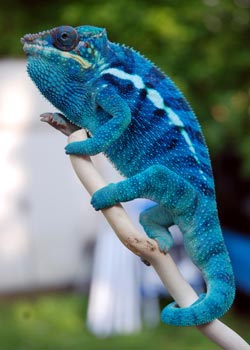 
Difficulty: Novice - Chameleons in general are not beginner animals but those designated novice are considered the best beginner species in the hobby with large, stable captive populations relative to other species. They are relatively easy to breed as well.


Brief Introduction:
The panther chameleon is a very common species in the pet trade with widely spread captive populations. They are native to most of the coastal lowlands of Madagascar and nearby islands, and there is tremendous variation in color among the more geographically isolated populations. Panther chameleons are often labeled by their natural geographic location, or locale. These often represent specific colors and are frequently named after a nearby town or village. Cross breeding locales in captivity can be a controversial topic where some argue for the importance of preserving the natural locale identities.


Description:
The panther chameleon is a medium to large sized species with an adult length of 15-20” (40-52cm). Their color pattern is extremely variable and the main reason they’re one of the most popular chameleon species. The Ambilobe locale is most commonly available, with Nosy Be, Ambanja, Sambava and other locales also bred in captivity. Like many chameleons species the color of a panther can change drastically during stress or courtship. Among the various locales their colors range from green, red, yellow, blue, white, orange and a combination of the above. Panthers also have colored barring that sometimes contrasts with their base color, creating a very striking appearance. All females are primarily peach to pink in color with some grey patterning, and their locale cannot be differentiated by appearance. A gravid female will have a darker background with orange to pink barring. Juveniles of both genders are usually greyish brown with faint patterning.


Behavior:
Like most chameleon species panther chameleons are tree-dwelling reptiles that are active only during the day. They can generally be found hunting prey or basking on the branches of trees and large bushes. Panther chameleons are territorial and don’t tolerate the presence of other chameleons in close proximity. When threatened they will frequently change color and inflate their body to appear larger. Contrary to popular belief, chameleons don’t change color in a direct attempt to match their background. Their color changes are influenced most by their state of health, emotions or level of stress, and the process of thermoregulation. Panther chameleons vary in individual personality and some tolerate handling enough to seem friendly. Like other chameleons they are a pet that is more for observation and should not be handled regularly.

Male panther chameleons can be sexed as juveniles by the bulge at the base of the tail and by their very colorful patterns as an adult. Females are predominantly peach to pink in color as adults. Click images for larger versions. 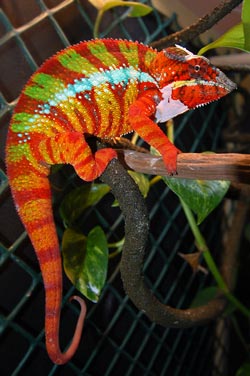 
Humidity:
Humidity is an important aspect of chameleon husbandry. Panther chameleons require levels around 50-70%, which can be achieved by several misting sessions a day over all areas of the cage. Live plants help increase and maintain humidity. Sometimes a cool mist humidifier or timer-controlled misting system is needed. See Water & Humidity for more information.


Cage Size:
In general when housing chameleons, bigger is better. Panther chameleons are territorial and easily stressed by the presence of other chameleons, even of their own species. Two or more panther chameleons should never be kept in the same cage. Cages should be furnished with many plants and climbing branches to provide opportunities for exercise and plenty of places for hiding. Substrate (mulch, soil, etc.) should not be used in chameleon cages. See Chameleon Enclosures for more information.


Lighting:
All lighting and heat bulbs should be outside and on top of the cage. There should be 12 hours of UVB light, along with 12 hours of darkness for proper rest. A UVB bulb is necessary to synthesize vitamin D3 in the skin and to facilitate absorption of dietary calcium. UVB bulbs only emit UVB rays for 6-8 months, even if they’re still shining, so they must be replaced at least twice a year. A basking bulb creates the heat gradient so that your cold-blooded chameleon can regulate its body temperature by moving into warmer or cooler zones as needed. When choosing a basking bulb start with a 60watt bulb and monitor temperature closely. Higher wattage bulbs are hotter in temperature and vice versa so chose the appropriate wattage bulb based on the temperatures achieved. A bulb that makes it too hot can burn your chameleon badly even from several inches away and through the screen. See Chameleon Lighting for more information. 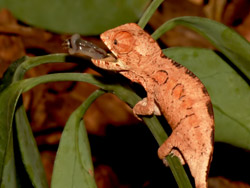 Feeding:
Panther chameleons are insectivores meaning they should only be fed live insects. Great feeder insects include crickets, silkworms, hornworms, butterworms, dubia roaches and superworms. Waxworms and mealworms are high in fat content and harder to digest so should only be used on occasion. The rule of thumb is to not feed insects that are longer than the width of your chameleon's head. 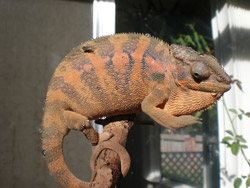 Egg Laying & Breeding
Panther chameleons do not need to be mated or even have seen a male to develop eggs. Like chickens they will lay infertile clutches of eggs periodically. Even if you only have a single female chameleon you've had since she was a baby it will be critical to provide her it's a place to lay eggs because egg binding (being unable to lay eggs) is fatal. Panther chameleons can start to develop eggs as early as 6-7 months of age. It is highly recommended to not breed your chameleon until the female is at least a year of age and 65g in weight so she is mature and can dedicate calcium stores to eggs instead of stripping it from her own growing bones. A gravid female will often display a darker body color with pink or orange patches. A clutch can contain on average 20-70 eggs and fertile or infertile makes no difference on size of clutch or whether or not the female will have trouble laying them. Females can lay 1-3 clutches on average per year, during any season. A single breeding may produce several clutches from the same pairing due to sperm retention by the female. Egg laying is a big strain on the female's body and heavy breeding can shorten life span. Extra calcium should be given to gravid females to keep up with the need of making eggshells. A female that is unable to lay her eggs for environmental, nutritional or medical reasons causes a serious condition of egg-binding, or being eggbound. This is a medical emergency and will be fatal if not treated. Over feeding can cause cause complications with egg laying and larger clutch sizes, making them more prone to becoming eggbound.


A female over 6 months of age should always have a laying bin available. The laying bin should be at least 16x16" and deep enough to contain 6-8" of egg laying substrate. The egg laying substrate should be either washed playsand or a mixture of washed playsand and organic soil moistened so that a tunnel retains its shape and does not collapse. There should be one or several branches going into the laying bin so that the female can crawl in and out as desired. A female about to lay eggs will often become restless, pace her cage and make decrease or stop eating in the week before. Once a female enters the laying bin she may dig several test holes before chosing to lay eggs. They dig head first to make the tunnel and then back into the tunnel to lay their eggs before covering the tunnel completely. It is absolutely critical to give a chameleon complete privacy while she is in the laying bin. If she is disturbed she may abandon her tunnel and could be become eggbound. The cage may need to be wrapped with a sheet with only a peep hole to keep disruptions out of sight. It can take several hours up to several days to lay eggs. A female that is weak, very uncomfortable, or refuses to use a laying bin may need veterinary assistance immediately. After a female lays eggs is it is very important to give her at least a week of minimal stress, increased hydration and calcium-rich food to recuperate.


Egg Incubation
The fertile eggs should be removed from where they were laid in the exact position they were laid in (do not turn) and half buried in the incubation substrate in a Tupperware container with no holes or only a few very small holes in the lid. Eggs are incubated in coarse vermiculite or hatchrite moistened to the point that only there are only a few drops of water when a handful of the substrate is squeezed. Seal the lid completely to retain moisture or the eggs will dry out and not survive. Depending on the temperatures of your home Panther eggs can be placed in a dark cabinet for incubation rather than using an actual incubator. Panther chameleon eggs take on average 7-12 months to hatch when kept at temperatures of 68-76F (20-24C).