Such a simple thing, yet it took so very long to make this room happen. Thankfully, all of my enclosures fit perfectly with no room to spare. Is that a good thing or a bad thing that I have no room for more reptiles? It’s a tiny room, so hard to get good pics, but I tried. I was going to do a video, but I sound like Darth Vader breathing in the background. So the chams can’t see each other, I have a curtain blocking their views of each other in the middle of the room which is working better than I’d hoped. For additional privacy all have fake greenery hanging on the outside of their doors. The leopard gecko tanks are beneath the chams. The beardie is next to Hammlet and by the window as he enjoys looking outside. My girls are side by side in the standard 2x2x4’ DIY enclosures and each of my boys are in double wide 2x4x4’ ReptiBreeze enclosures. I had to get a second Mist King as I‘m running too many nozzles for just the starter system. Added bonus is I don’t have to run any tubing across the room. All of the lights turn the room into an oven, so I have a portable ac unit to keep ambient temps in the low to mid 70’s. I had to put a deflector on the ceiling vent so it wouldn’t blow on the chams. Only thing left is to get Jack a second UVB light (I keep forgetting or they’re out of stock) but thankfully he basks right below his uvb.
Surprisingly, Jack has been making full use of all of his additional space and Hammlet has pretty much just been staying on one side. When they were in their 2x2x4’ enclosures, it was Hammlet that was always patrolling every last inch and Jack who was happy on just a couple of branches. Go figure! 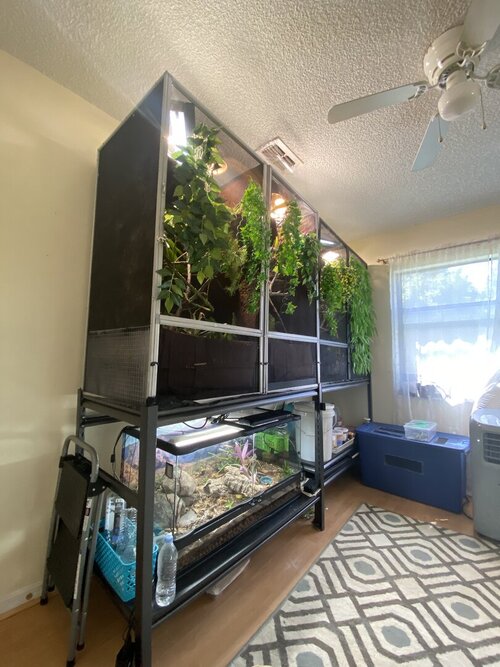 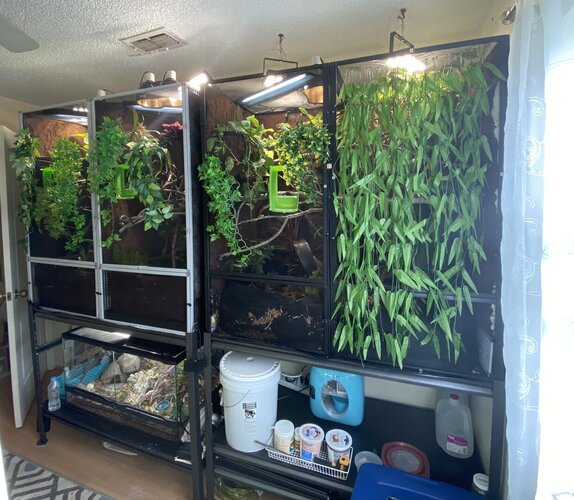 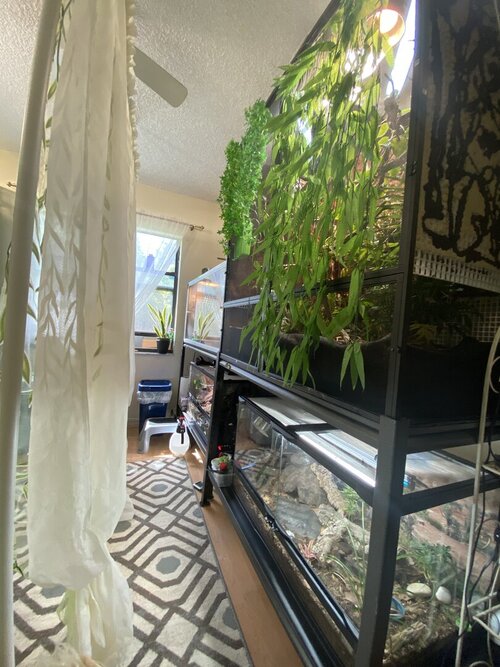 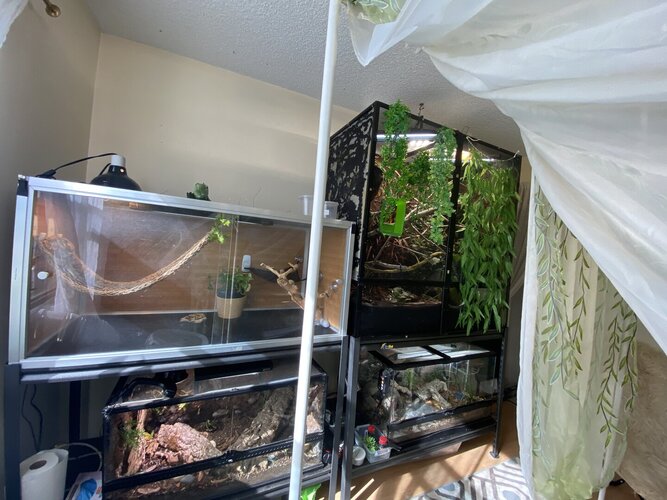 Bonus pic of Jack…seconds before he tried to attack my phone. 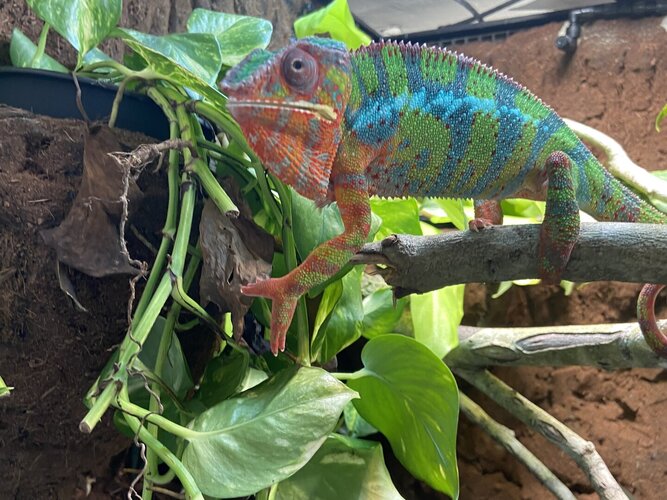 Bonus pic of Spike, just chillin’ on his hammock. Most of his tank items have been removed for cleaning after his poop painting. **Yes, precautions are strictly adhered to, to prevent any cross-species contamination. 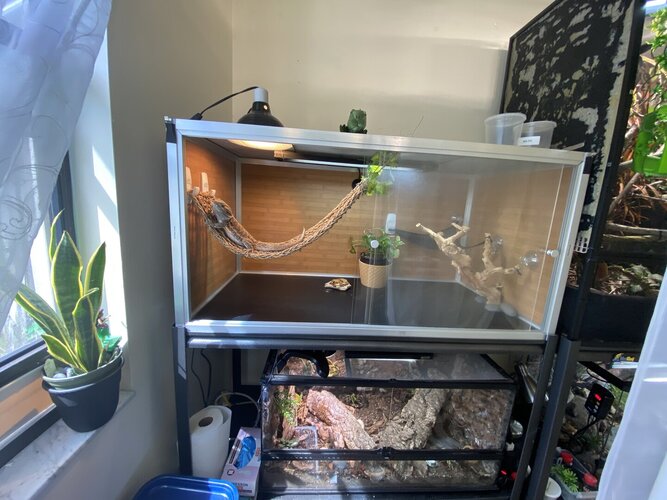 And Jack and Spike are so pretty!

Amazing job! I can see why it’s your happy place, I would love to set up a nice cozy chair in there, grab a book, and just chill in there with the reptile buds.

If you are going to the upcoming reptile expo, it’s probably a good thing that you have no more space for reptiles, otherwise you would be going home with a truckload of reptiles haha!

Staff member
Awe, it's so beautiful! You did an awesome job, it looks amazing, and you're a great reptile owner!!!

They all looks awesome Vikki! And so clean!

What a great space you created!

Beautiful!! I can see why it’s your happy place! Your chams are beautiful to! Your beardie is a handsome fellow!

Thanks chamily for all of your kind words!

I’m so happy to have finally set the room up and gotten all of my scaly babies in their own room. Now the chameleons don’t have to watch me sleep and the cats and dog are banned from entering. I pretty much trashed the rest of my house…had sticks, plants and their soil everywhere along with tools and what not. I’m still working on putting everything away and reclaiming the space all of the critters had. I even have a dining room again! Whoo! Not going to the reptile expo thankfully. I do have some empty enclosures put away and won’t turn down an animal badly in need of rescue, but other than that, I’ve got all I need and want right now. Yes, there is a cozy chair in there. However I end up sitting on the floor and let Spike run around after he’s had a bath and some real sunlight. When I go in at night to feed the geckos, I love seeing all the sweet little sleeping faces of the chams and beardie. I hope their room and new enclosures make them as happy as it makes me.

Do I want to know what a poop painting is?
K

Beautiful set up! I'm sure the critters are all happy there!

I always had curtains down the middle of my reptile room too! They do work well!

ERKleRose said:
Do I want to know what a poop painting is?
Click to expand...

I think you've got a good enough imagination...

It's things like that that make me so glad chameleons are arboreal and my beardie paper trained himself!

MissSkittles said:
Bonus pic of Jack…seconds before he tried to attack my phone.
View attachment 308006
Click to expand...

MissSkittles said:
Is that a good thing or a bad thing that I have no room for more reptiles?
Click to expand...

they´ll all be very happy there.
Got the same problem with the´montane`room, it´s getting pretty warm with all the light, especially due those jungle dawn led bars.

Wish Spike would do the same. He used to use the same spot and I put paper towel down there. So then he started letting loose everywhere and flinging it around for good measure.

What is a wizard wall?

Nice reptile room, i really like how neat and tidy the racking looks. And good idea with the curtains.

MissSkittles said:
Wish Spike would do the same. He used to use the same spot and I put paper towel down there. So then he started letting loose everywhere and flinging it around for good measure.
Click to expand...

MissSkittles said:
What is a wizard wall?
Click to expand...

It's what a little kid might call a lizard wall.

(I had a speech impediment as a toddler.

)
You must log in or register to reply here.

What’s up with Jack?

Is it normal for my chams eyes to sink in while sleeping?

What does everyone keep their room temps at where your chameleon is?