My first Cham! Hello to the community.

Hello everyone. I'd like to say that a good majority of my studying has come from these forums. I do love to read books and articles but I believe that experience from a community far exceeds one author.

I've wanted a chameleon since I was a kid. They were just to hard to care for but that's not the case now!

After much research I invested in a SC3 DIY screen cage. Along with a pothos, hibiscus and an umbrella plant. I added some vines an 18" 10.0 UVB light and a 60w heating light. I was in suspense forever because last year I found a respectful breeder at a reptile show. I was amazed at how beautiful and unique chameleons are once again. Here I finally was a week away with the cage and nothing in it!

Finally I went back to the reptile show with my girlfriend and took home my first baby ambilobe. After letting him crawl around on my finger he immediately went for anything green he could climb on. It's been about a week and he's finally settling in. He ate from my hand one day after I had him. However he doesn't seem to enjoy leaving his vines. So, I've removed the screen door considering I have plants hanging around his entire cage for his comfort.

I plan to free roam him slowly at his own pace. I just mounted a grow light that's 48" and purchased a 150w UVB bulb for a heat light + UVB for hos ever expanding territory. The 48" has 4 daylight power compact bulbs along with 4 actinic ones too. My new obsession with plants is the reason why I hung it haha. I hand mist him 2-3 times daily and every other feeding I dust a couple crickets with calcium. Any other words of advice would be greatly appreciated. The breeder told me the biggest issue is to make sure he eats since he will be in such a big cage. So that's why I got him eating from my hand haha. Recently he even ate from my gfs too.

Anyways, I want to thank the community for sharing their experiences. It's helped me greatly.

Welcome to the forum! It's so nice to see someone who comes into this hobby having done the research. I for one would love to see a photo of your guy and the free range/cage hybrid you've started, we love seeing photos.

I have no one to thank but you guys! 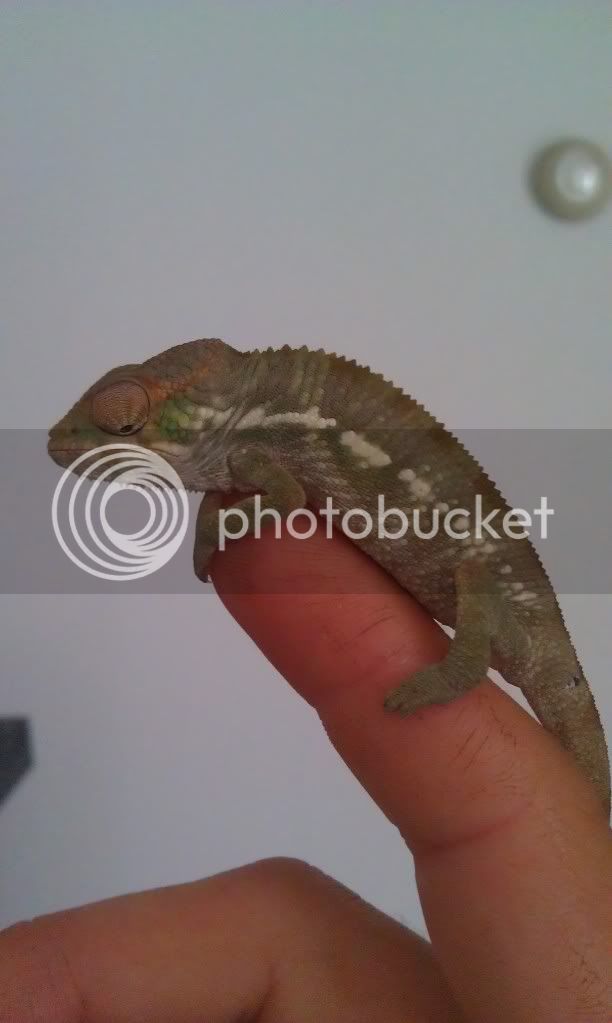 This is a picture of him the very first day. l'll have to get some pics of the setup this week. The free range is a work in progress. He is about 3 months old now.

He's a cutie! He has a lot of green already.

Welcome to the forums and congrats on that little cutie! I free range all my animals and always have. I start babies out in something like this:
https://www.chameleonforums.com/mem...anges-picture10208-one-ellys-free-ranges.html
When they are so tiny I don't want them to get lost in my house. After they get a little age on them and size then I move them to a large free range and the are free to roam as they please.

Hey Jannb, thanks for the advice. Do you have any other tips on free ranging for chameleons considering you've got some experience under your belt? Any crazy stories... I need to hear haha?

I'm going with a big grow light for the plants and a 150W UVB light for heat +UVB. I was wondering what type of wood I could use to setup for a basking spot. Seeing as most of my plants will die under the heat from a bulb that hot. I'm thinking of finding a nice branch in the woods and pressure washing it to use.

I've had quite a few free rangers at the same time and also done some lizard hunting. Allot of the time though they are in their trees and I just can't see them. I really like the Mega Ray bulb for free ranging. You can read about them below. They are hard to get but they do have the 100 watts available right now. I just got a couple the other day. I wouldn't get anything over 100 for a chameleon. I get the 70 lows for my females.
http://www.reptileuv.com/megaray-sb-100-watt-self-ballasted-flood-uvb-lamp.php

Shamalon said:
I was wondering what type of wood I could use to setup for a basking spot. Seeing as most of my plants will die under the heat from a bulb that hot. I'm thinking of finding a nice branch in the woods and pressure washing it to use.
Click to expand...

Yes, you could totally find a few nice branches from a tree outside, strip off the leaves and weak twigs, wash it, and use it as a frame around the free range. I love natural branches because they're always going to give you a variety of widths and pathways that artificial vines are never going to give you. Perfect to work out those little chameleon feet properly!

You want a basking spot at about 80-85F for a young guy like him and even if you go up to 90-95F you're not going to set the wood or plants on fire so it's not as bad as you might think. The plants will typically do fine but any branches you use will hold up perfectly.

Edit - Decided to link you to my write up on free-ranging, which is full of photos of my past free ranges. It'll give you some ideas and some advice, hopefully. I can't wait to move somewhere where I can set up my huge Meller's in the free-range I'm planning in my head! lol
Last edited: Jul 2, 2013

Thanks for the info on what types of bulbs to get Jannb! I already just purchased a mercury vapor bulb for the heat and uvb though. I didn't read this until I got back from the store.


I think i'll go branch hunting tomorrow after work. I'll be sure to post some before and after pictures of the free range slowly evolving. Your guide on free ranging was very informative Olimpia. I appreciate the tips! I'll let you know how it goes. As far as ideas in your head for future plans.. I know the feeling haha. I'm doing that for this pond inside of an aquarium idea at the moment. It doesn't sound like it makes sense but it totally does haha.

How often do you give him calcium d3 and herp

I dust one or two crickets with calcium about 2-3 times a week. I feed him 7 days a week.

As far as D3 and vitamins I'm going to go with a couple crickets dusted monthly. Correct me if I'm wrong but I hear too much can be bad.

Shamalon said:
I dust one or two crickets with calcium about 2-3 times a week. I feed him 7 days a week.

As far as D3 and vitamins I'm going to go with a couple crickets dusted monthly. Correct me if I'm wrong but I hear too much can be bad.
Click to expand...

You can do plain calcium more often without fear, it's very difficult to overdo it with plain calcium. And when feeding crickets, I like to make sure every one of them is coated lightly - the reason being that in an idea world you want your calcium to phosphorous ratio to be a perfect 1:1, it's what's best for your body to run efficiently. But crickets have an awful calcium to phosphorous ratio, more like 1:3, so by dusting lightly with calcium we hope to bring that ratio back into balance. Because too much phosphorous will actually inhibit efficient calcium absorption (and also the reason why you want phosphorous-free plain calcium).

But you're right about vitamins and D3, that is what you have to watch out for. That's why having a good UVB light and gutloading your feeders well are important, and then the supplements are just there to fill in any gaps.

What do you recommend for gut loading? I used potatoes last week and I'm switching to carrots this week.

Check out the gutloading section on this page: https://www.chameleonforums.com/care/food/
It gives you a great list of foods that are great and how to gutload properly. I also recommend getting a bag of good commercial dry bug food, I think it's a great thing to have on hand regularly. Something like Cricket Crack, Repashy Superload, or Dinofuel, for example. They're full of great ingredients to that provides most of the nutrition you need in one place, and then you just add fresh fruits and veggies, which double as moisture and extra goodness for your bugs.

So, it's been a couple months now and I'd like to update the community on Leon's status. I couldn't keep him in that tiny little cage for the life of me. So, his free range has been set up and grows larger monthly it seems. I've read so much about the dos and don'ts from you guys but at the same time I've gradually been doing my own thing as I do with all of my pets. Emulating his life in the wild is my true goal.

His diet consists of super worms and crickets dusted with calcium and the crickets are obviously fed a varied diet of fruits and veggies. I take him outside often to eat as well. He loves relaxing on the umbrella plant on my patio table and eating everything that comes within range. I've witnessed him eat spiders, wasps, several stink bugs and other strange looking things. I never really followed the feed him the size of his eyes and head idea. He devours everything and poops big haha. I'd have to say he's the best with staying where I put him. He never leaves his range or when I have him outside. So far at least.


I had a Labor Day party and he was the star of the picnic outside as a centerpiece amongst the food deemed "fly patrol". Having him in the free range changed his attitude so much. He's very carefree and not nervous around multiple people unless you have fast movements or get over top of him. Everyone loves him. I'm going to get pics up of his new free range soon! He was in my living room but the range got too big and so he has the whole side of a bedroom now. His colors are starting to come in very nicely!

Anyways, I'd like to thank everyone here again for the help! I've even finally bred crickets. I've only been wondering how long it takes for crickets to reach their adult size? 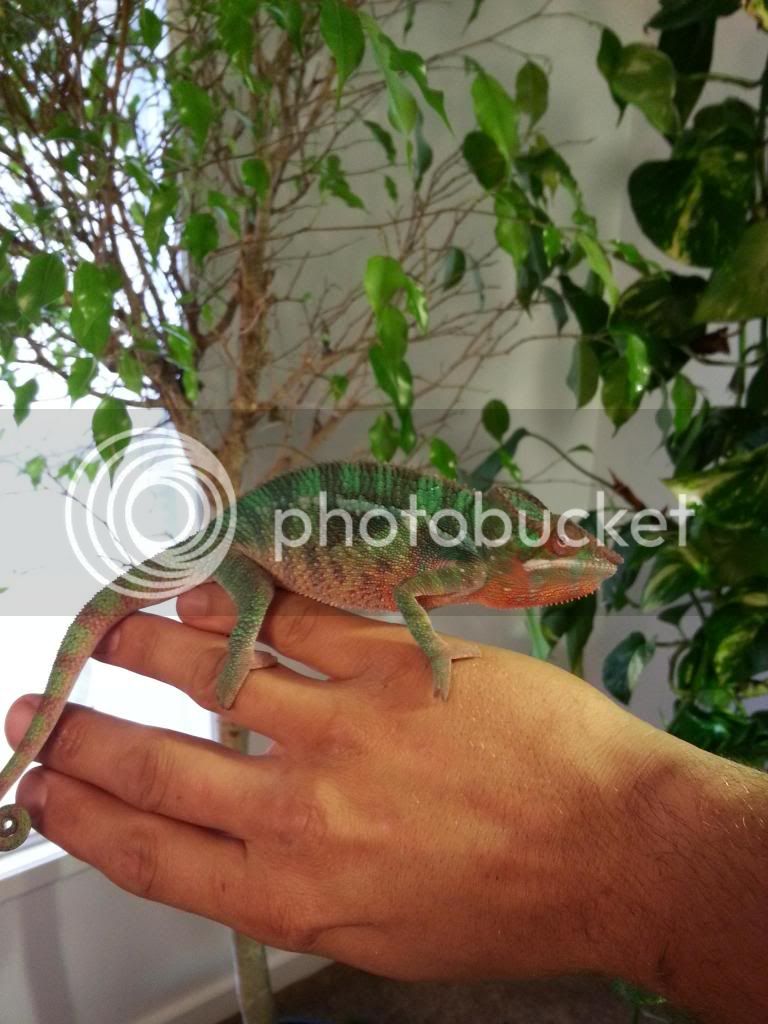 It's so interesting how much he's changed. He use to be so paranoid around me. Now he drinks from the misting bottle and lets me peel off the skin from his body when he's shedding. He use to run and hide from me every time I walked in the room when he was the size of my finger! He's so spoiled that he will not eat crickets from his feeding container on the free range.. only worms. I have to hand feed him the crickets or he just won't eat them. What a brat.

Here was the original freerange/cage setup I did to slowly lure him out. 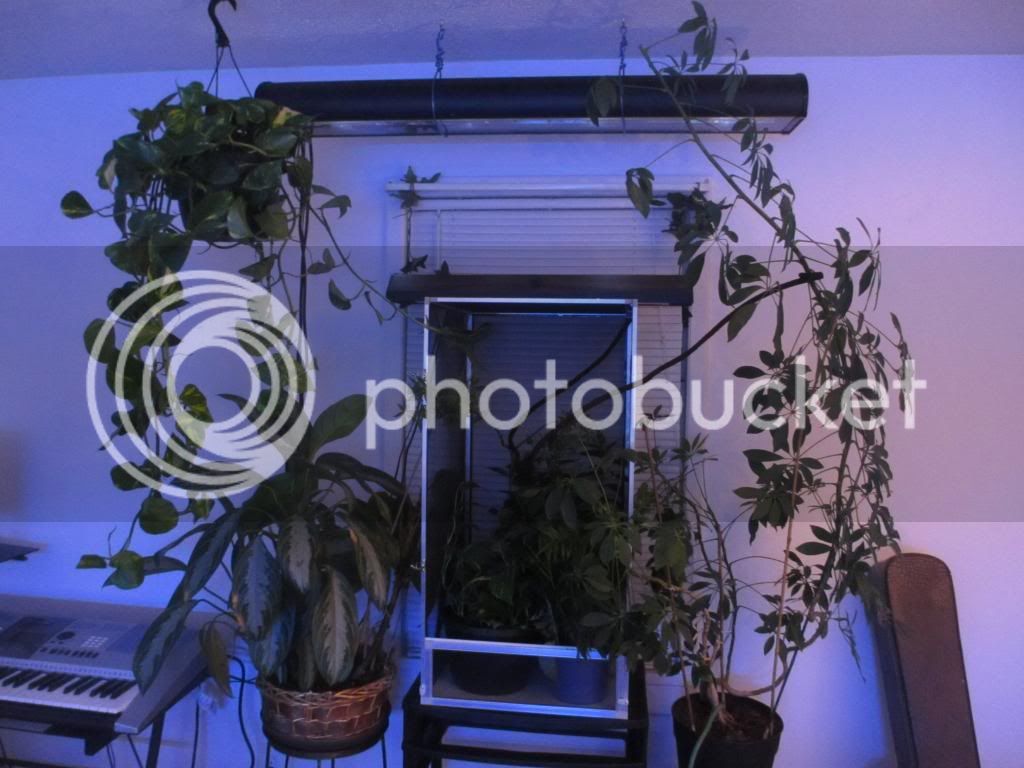 And it slowly changed to this as I introduced that 150w mercury vapor bulb. So hot, I kept it pretty high up when he was such a shrimp. 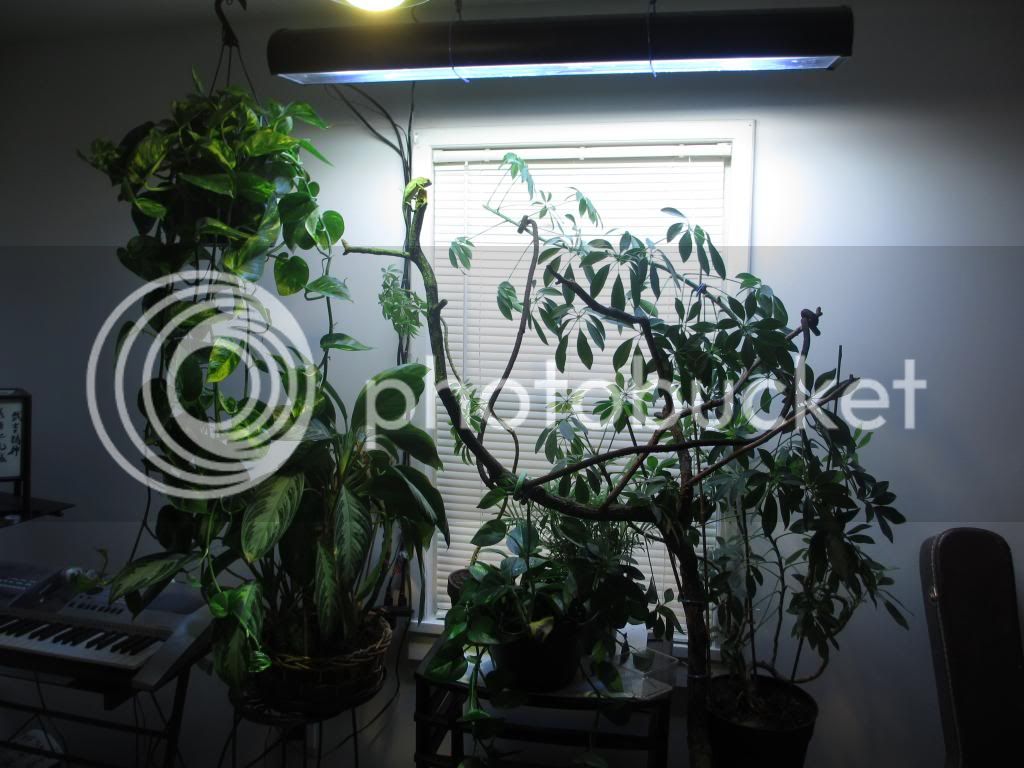 I only caught him playing the keyboard one time on this range.. haha.
You must log in or register to reply here.