I have a question for anyone out there experienced with breeding T. j. xantholophus. I have a female that was given to me by a forum member, and she unexpectedly gave birth. The babies are doing fine and mom is fine. I have heard that they can potentially give birth to multiple clutches from a single breeding. My female gave birth on 12/16/2010. That was about 7weeks ago. She is showing signs of gaining a gut again and is basking laterally turned toward the basking light. This isn't common for her normally. Her feeding has slowed over the last week or so as well, which is what happened when she cranked out her first clutch. I don't have a scale to measure her weight, (I plan on getting one ASAP) but she has obviously put on some weight. My question is, can she give birth within 7 weeks of dropping a first clutch? If not, how long? I've used the search option on here and I couldn't find anything dealing with this topic. I've searched online as well and didn't find much other than the fact that they can multiple clutch. Any and all opinions/facts/experience welcomed. Thanks. 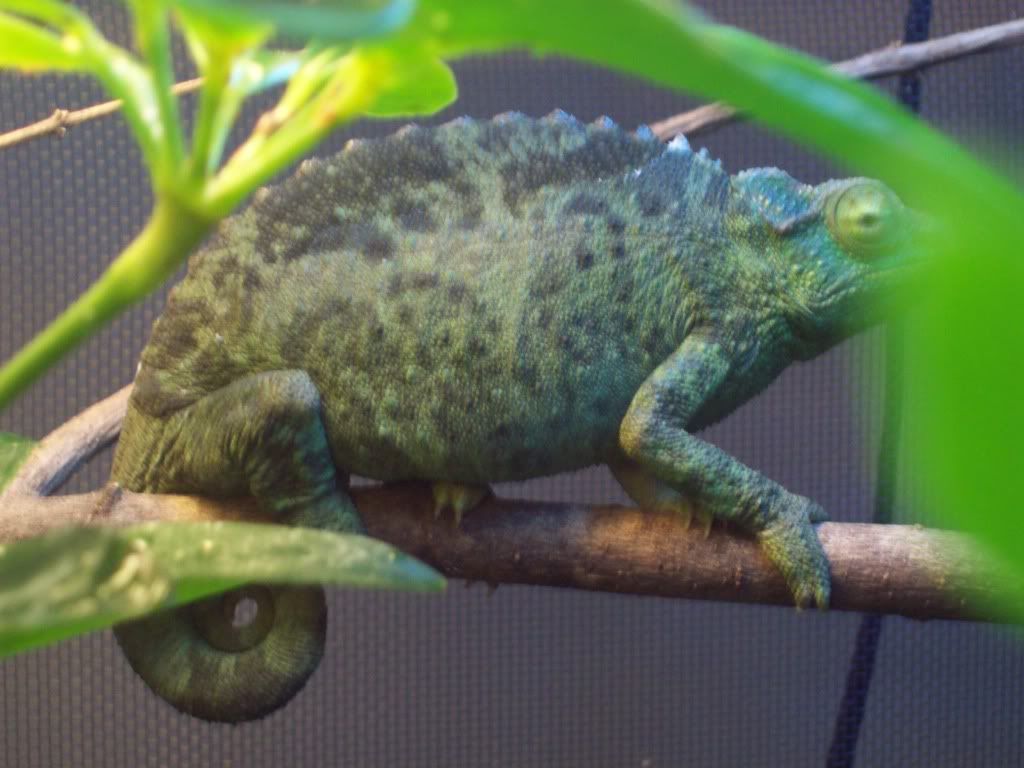 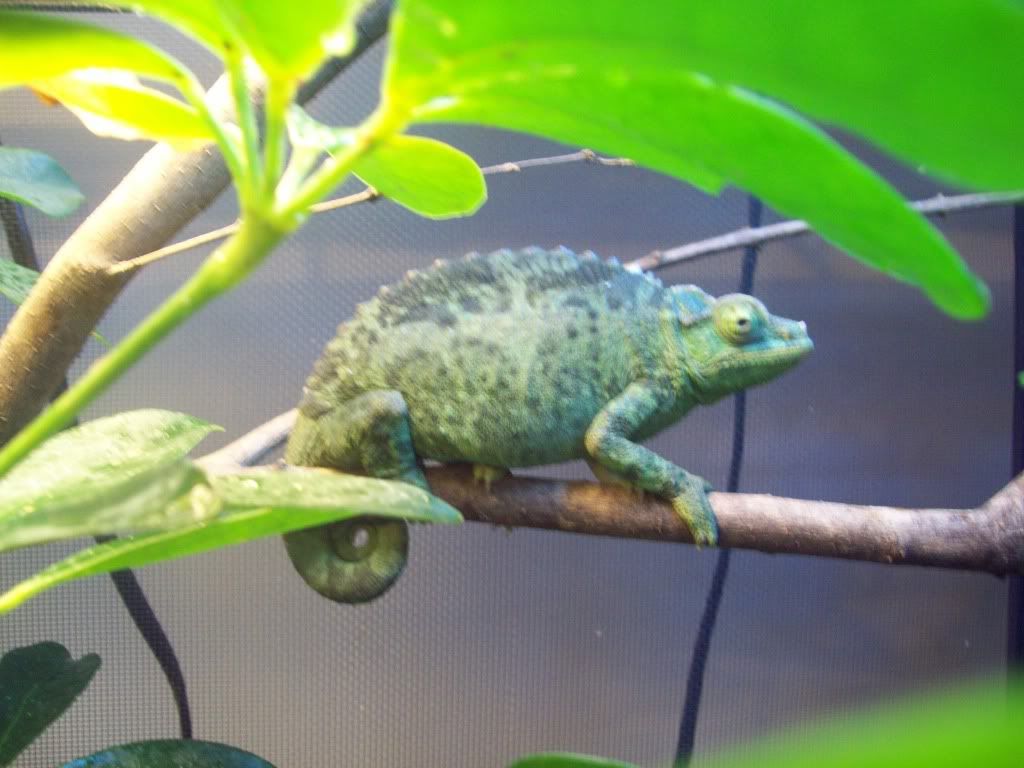 based on the pics posted, i would say even though she is not displaying the most typical gravid coloration, that she does appear to be gravid and is likely working on a followup clutch. jacksons do save sperm, and once impregnated, are certainly capable of having followup or "back to back" clutches, without further impregnation. imo it is also possible for them to have already started a 2nd clutch before giving birth to to the first one, making it possible to have the followup clutch in less time than the standard gestation of 6-7 mth.- the last clutch of jacksons i had, was a less than successful birthing of less than 10 neonates. i dont remember the exact dates or of # of neonates, but it was less than 10 neonates and if i remember correctly, it was less than 5 months after the previous birthing by the same female (with no further m/f contact), so its likely possible it could even happen in less time than 5 months. i will try to see if i can find the info. all were born under developed and with the yolk sac still attatched. all but one died in the first week, i was only able to keep the strongest one alive for about a month. see posts "unexpected birthing" and "micro neonate", i will try to find the links. this is just my opinion, but i think being in close proximity to the male even if there is no contact, might be a factor in premature followup clutches. i dont think they need to see the male to know he is there. just a hunch, no scientific basis. i think my advice would first be to get a small digital scale that weighs up to about 500grams and is capable of 1/10 gram increments, you can usually find them at head or tobacco smoke shops for around $20. try to get one with a tare feature (most have). so you can zero out the weight of whatever container you are using to weigh her in. that being said, i think the best course of action would be to proceed on the assumption that she is again gravid. i would start weighing her 1x a week and keep a written log of her weight, that will provide a much clearer gauge of what is going on, as opposed to just winging it. a mid-late term xanth should gain at very least a gram or two a week. Whether m or f, weight change is often one of the earliest indicators of changes in health, thats why imo, its always a good idea, to weigh any cham regularly. its always a good idea to keep chams on a diverse of feeder plan as possible, but, i think situations like this, merit extra effort in that regard. imo, not really a good time to feed an excess of cricks or mealworms, better conditioning feeders would be silks, dubia, bsfl. if you are having probs getting her to eat , you can probably entice her with blue or green bottle flies (or even their maggots if they were raised by you on wholesome media). (jmo, houseflies, especially wc should be avoided). bottle flies are almost irresistable to xanths and if she refuses those, then i would say it is cause for concern, or possibly a warning sign that she is less than a month from birthing. premature, underweight, undersized or otherwise underdeveloped clutches do not always display the lumpiness that healthy full term clutches do, so they can easily catch you off guard. i recently gave this same advice in another thread, but i think one of the most important things you can do, is to examine her ultra thoroughly, and make a mental, if not a written note, as to every detail of her condition, make note of even the slightest details, issues, skin anomolies etc. and keep a sharp eye out for even the slightest changes. also be a good time to keep an extra close eye on her urates for changes. clutch developement is based in part on temp, you might want to consider lowering her basking temp to about 80*, that way, if it is a premature or back to back clutching, it will give a little added time for developement. i dont think its imperative, but, if $ isnt a big issue, then a trip to a proven herp vet might be worthwhile. hope that helps . jmo
Last edited: Feb 15, 2011

Thanks so much. Just the type of information I like; Detailed! I got the scale last night but have yet to use it. She did eat 2 Dubias last night, but that is still a far cry from her usual intake. I have just not even tried offering her anything for the last 2 days to see if that would spark her interest, and it seemed to do so somewhat. Thanks again for all of this excellent information that is obviously aquired from lots of experience.

easy to get excited, but,

just to be clear, i dont really view a back 2 back clutches as a good thing. moms need time to recover, and clutches need full term in a properly conditioned mom, in order to have a chance. not getting it is likely to be detrimental to either the mom, the clutch, or both. jmo, so the reality is, if there is a back 2 back clutch, it wont likely be as strong as the previous one, so it would be good to pay extra attn to husbandry issues during this time period. hope it works out, keep us posted on any new developements. / edit ps. just a thought, but, over-supping can also lead to appetite issues, so it may not be a bad idea to post your supp routine just in case. oddly enough, fasting or witholding of food is often called for during hunger strikes or periods of stubborn eating, so that was a good move on your part. also keep in mind that even healthy xanths dont neccessarly eat every single day, i have had xanths both m&f with no appearent health problems that would eat regularly every single day, but, inevitably the would always reach a point where they would go a day or two without a lot of interest in food and then back to normal, i think its just normal, but the trick is to tell the difference between a normal lack of apppetite and something that is indicitive of a bigger issue. one last tip; i think the easiest way to weigh is in a small paper lunch bag, think it stresses them out less than using a tupperware, and you dont have to fight the issue of them trying to get out while you are weighing them. jmo
Last edited: Feb 15, 2011

I'm with you on back to back clutching not being good. Like I mentioned before, she gave birth on 12/16/2010, which was only 2 months ago, so I was skeptical that she could be producing another clutch so soon. But based on what you told me about the possibility of starting another clutch before dropping the first one, I guess it is a possibility. As far as supplementation goes, I am very reserved on supplementation for Jacksons based on what I've researched on the dangers of overdoing it with this species. My schedule for her has been a dusting of Miner-all O (no D3) only once a month. The main aspect of supplementing her that I've focused on is the gutload I've given her feeders. I buy crickets and I raise Dubias. I buy crickets twice a week and I split them up. The ones she gets are given a gutload based on a recipe I discovered that is produced exclusively for Montanes species. The others get more or less the same gutload, with some minor differences in ingredients based on a recipe I got of of Sandra's very helpful blogs. I've had Jacksons before years ago, but I was alot less informed and educated on them compared to now. You also mentioned not to expect a large clutch this go around. I'll go ahead and tell you now that her first clutch was only 3 babies. When I was given her by the fellow forum member, she was very small. The forum member I got her from is a really great guy. He got a pair from someone at our reptile show in Birmingham, and his male died before he even got home from the show. The guy who sold them to him keeps them in deplorable conditions- I've had another male from the same guy that only lasted about 6 weeks. This female has doubled size since she was given to me, yet still gave birth to my surprise. I didn't even think she was sexually mature. But thanks again for all the advice you've given me. Jacksons have always intrigued me and I'm so happy to finally start to have some success with them.

Dang, I knew she was gonna do you good, LOL. Maybe this clutch will be bigger than the last, i still think she was WC just by the was she was already pregnated.

jrh3 said:
Dang, I knew she was gonna do you good, LOL. Maybe this clutch will be bigger than the last, i still think she was WC just by the was she was already pregnated.
Click to expand...

Hope so!!!
You must log in or register to reply here.

S
Gravid dwarf Fischer is in her laying bin and is now mouth wide open?..
2