Hi guys! I feel like I have the situation with Karma and his slow recovery pretty well in hand, but I wanted to see if I could have more experienced people than I review my husbandry practices and see if there's anything else I should be doing/need to change. I'm very open to constructive criticism!

My Chameleon - Male veiled chameleon, approximately 5 months old. Karma has been in my care for just about 5 weeks now (brought him home on Jan. 5).

Handling - Karma is generally handled briefly (1-3 minutes) twice a day due to ongoing syringe feeding and medication (eye drops). I intend to limit his handling to "whenever he feels like it/as absolutely necessary" as soon as I can!

Feeding - Currently I'm feeding Karma 0.5mL of Emeraid IC Carnivore once a day via syringe, usually at around 6-8am in the morning depending on my shift. As soon as Karma has regained interest in feeders, I will be offering him appropriately sized crickets, black soldier fly larvae, dubia roaches, silk worms (when I can get them), and black soldier flies as his primary diet. Superworms, hornworms, and waxworms will be fed in limited quantities as treats consisting of 15% or less of his total calorie intake, and the occasional waxworm (sphynx) moth or other insects may be included. The intended feeding schedule is 10-15 insects (or more, pending) every day in the early AM whilst still young, with occasional treats throughout the day. I'll gradually cut back to 5-8 feeders or so every other day as he matures. I have a Full Throttle feeder cup, and will be working on tong- and hand-feeding

Gutloading: Insects will be gutloaded with Repashy Bug Burger (gel), Repashy Superload (dry), and various fruits and veggies. I prepare large amounts of "chop" for my birds, so the menu is constantly changing! I currently have a batch of mango/papaya/apple/banana and shredded carrot/green beans (fresh leafy greens added at time of serving - organic spring mix, collard greens, mustard greens, organic dandelions, etc.).

Supplements - I currently have on hand ZooMed Calcium with D3, Calcium without D3, and ReptiVite, and intend to switch to Repashy Calcium Plus LoD. With my ZooMed supplements, the schedule is calcium without D3 lightly dusted on every feeder, calcium with D3 every two weeks, and Reptivite every two weeks (alternating weeks on Sundays). When I make the change to Repashy Calcium Plus LoD, I will be stopping all other supplementation and using it on all feeders.**

**Is that the correct usage of Calcium Plus for Veiled chameleons? I don't want to over/under supplement Karma!

Watering - Right now I'm handmisting with a pressure mister at least 2-3 times per day for 3-5 minutes, and throwing in "bonus" mistings whenever I'm around and see that his cage has completely dried out (~3 hours). I do have a MistKing system, but haven't had a chance to set it up yet! The automated misting schedule I'll likely be using will be every 3 hours from 7-7 for 2 minutes each session, and a 5 minute session in the afternoon. Karma has an excellent drinking response, and drinks at least a little whenever I mist him. He appears to be most likely to want a long drinking/eye cleaning session in the mid afternoon/early evening. As part of his recovery plan, Karma also gets a 20-30 minute session in the shower 2-3 times per week.

Fecal Description - Recent droppings have been well formed and moist with white to off white urates, occasionally with a yellowish cap. Karma's fecal float as of mid February was positive for pinworms and he's undergoing treatment. My vet and I initially opted for a more gentle dewormer (Strongid T) as Karma was quite sick at the time, but since the worms have proved resilient we may need to use something stronger (Panacur). I'll be testing his next fecal for evidence of ova (eggs).

History - An in depth history can be found here and here, but essentially this little guy was a PetSmart baby that was sold, returned, and then surrendered to the veterinary clinic I work at. I don't know much about his husbandry prior to my taking him on, but it definitely wasn't anywhere approaching good (or even adequate!). Karma was in poor condition when I originally took him in, and his eyes were completely stuck closed (including clogged nasolacrimal ducts) and extremely sunken due to chronic dehydration and likely other poor husbandry practices. Since he couldn't see, he wasn't eating. He's also dealing with a heavy parasite load (pinworms), which is the likely cause for his current lack of weight gain and possible vitamin deficiency despite more than adequate syringe feedings, and may also be why he isn't interested in feeding himself at present.

Cage Type - Karma's current enclosure is a 16x16x30 medium ReptiBreeze screen terrarium. Due to current space restrictions, I plan on upgrading him to a 36x18x36 ExoTerra enclosure in the spring/early summer. Undecided if I want to get another screen enclosure or try a glass one. Ultimately I'd like to make a large custom build or purchase a Dragon Strand large clearside atrium when I have the space, but that probably won't be for awhile.

Lighting - I'm currently running a 14" ReptiSun LED UVB hood with a T5HO ReptiSun 5.0 bulb and built in 6500k daylight LEDs plus 620nm red LEDs. I also have a mini deep dome with a 60w Sylvania Spot-Gro incandescent plant light. Due to my somewhat irregular shifts i've been manually turning the lights on/off and keeping to an approximate 12 on, 12 off schedule. Generally this works out to 7a-7p, though I've had to wake him slightly early or turn the lights off later before. I'll be picking up proper timers soon, when I can more accurately figure out my shifts.

Temperature - Room temperature (and thus the bottom of Karma's enclosure) varies slightly between 68-72F. His basking spot is between 84-88F accounting for casque and body height, with a top temperature of 90F if he were to go directly on the screen (which I haven't seen him do, but you never know!). The lowest overnight temp I've had when my radiator failed to kick in was 60F. I measure the temps with two different thermometers (ZooMed digital thermometer, All Living Things digital thermometer/hydrometer) and have double checked with a temperature gun as well, though I've yet to purchase my own.

Humidity - The rH of the room is generally within the 28-30 range, and Karma's enclosure has generally been ranging between 40-55%, with levels of 80%+ immediately after misting. I currently hand mist 2-3 times per day for 3-5 minutes each session, and once I configure my MistKing I plan to have it run for 1-2 minutes every 3 hours, with a 5 minute session in the afternoon. 3 sides of the enclosure are currently wrapped with a shower curtain to help maintain adequate humidity levels, and I will likely be purchasing a fogger to increase humidity levels overnight. I'm currently using a digital hydrometer/thermometer combo to measure levels, and have the hydrometer probe fed through to the back of the enclosure and largely out of direct water contact. I didn't bother keeping the analog hydrometer in Karma's enclosure as it struck me as wildly inaccurate, but I can always put it back if recommended.

Plants - There are currently three young live plants in Karma's enclosure: an umbrella plant (schefflera arboricola), a golden pothos, and a pearl and jade pothos. There is also various fake foliage (plastic and silk) to add aesthetic appeal and provide more coverage while the live plants grow out.

Placement - Karma's enclosure is on top of my dresser and the top of his cage is easily 6 feet off the floor, possibly more. His favorite spots are all above my head, at any rate! There is an air vent on the ground about four feet to the left of his enclosure, but it's currently closed off and there aren't drafts. The entrance to my rooms are to the right of his cage, though Karma doesn't have line of sight due to the shower curtains. There are three large bird cages in the room, none of which Karma can see for the majority of the day thanks to room dividers. He has occasional visual exposure to my little cockatiel, who insists on helping me with my morning routines and flies around, but I try to avoid line of sight with my much larger cockatoo. I'm the only person who's regularly in the space.

Current Problem - Karma is experiencing ongoing eye issues and lack of weight gain, likely due to his parasite load which may very well be inhibiting nutrient absorption. The right eye in particular is frequently sunken, slightly misshapen, and doesn't seem to have a lot of mobility in comparison to the left. This improves after eyedrops or misting. My vet and I are doing our best to get him back on his feet, and I just wanted to check of there's anything else I can be doing! 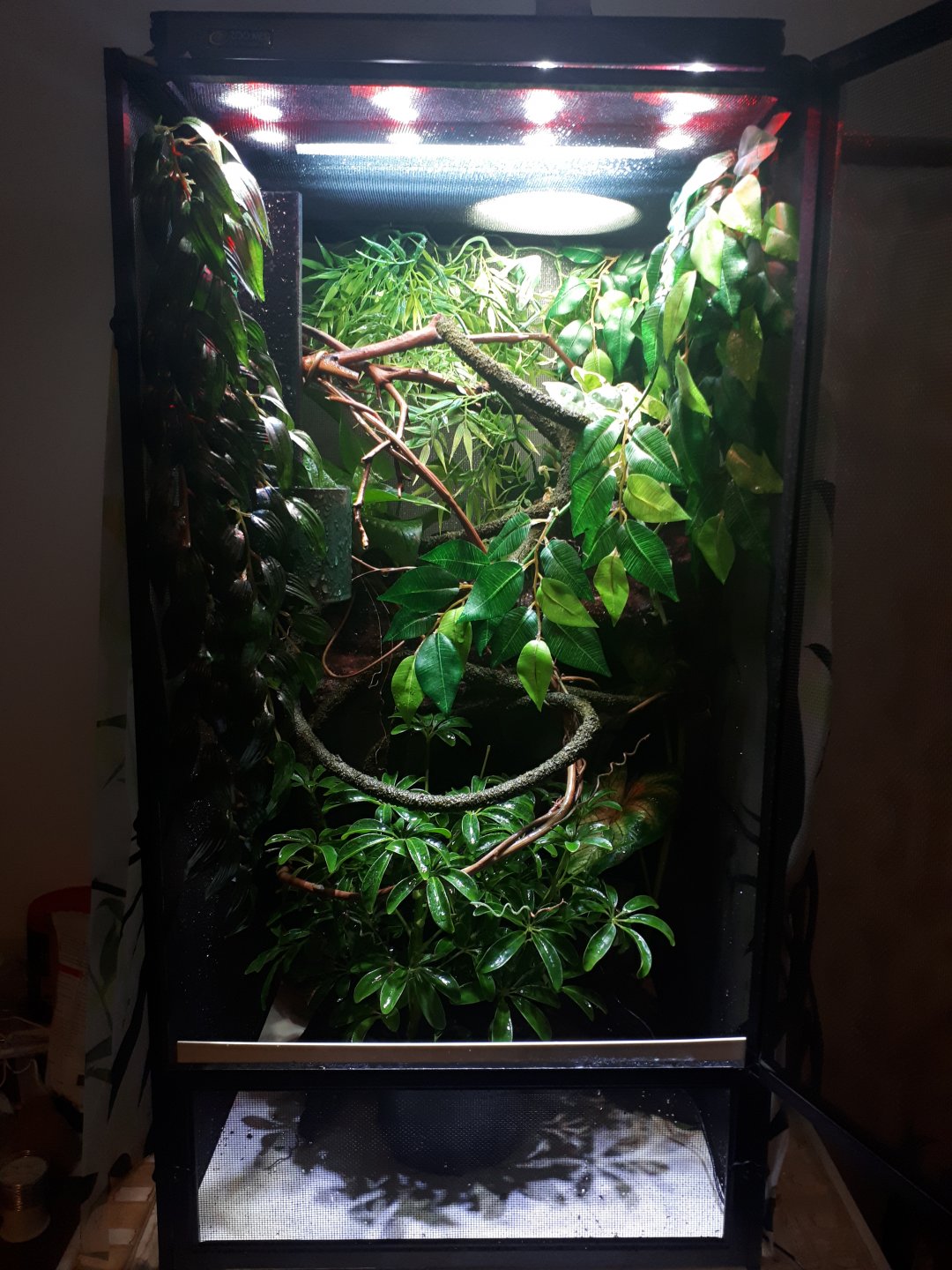 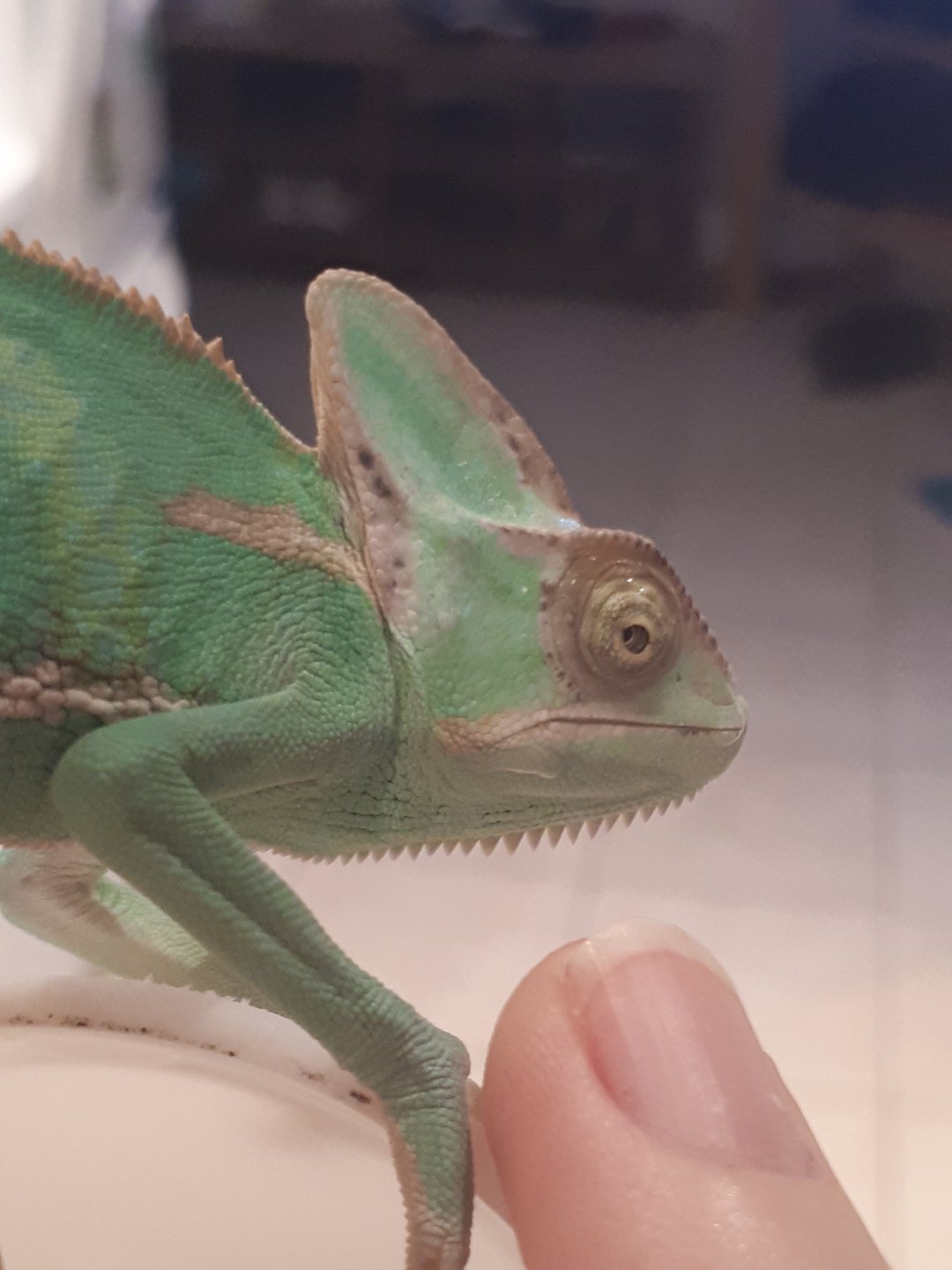 Karma's better eye: (he had just blinked, so the picture is a tiny bit funny) 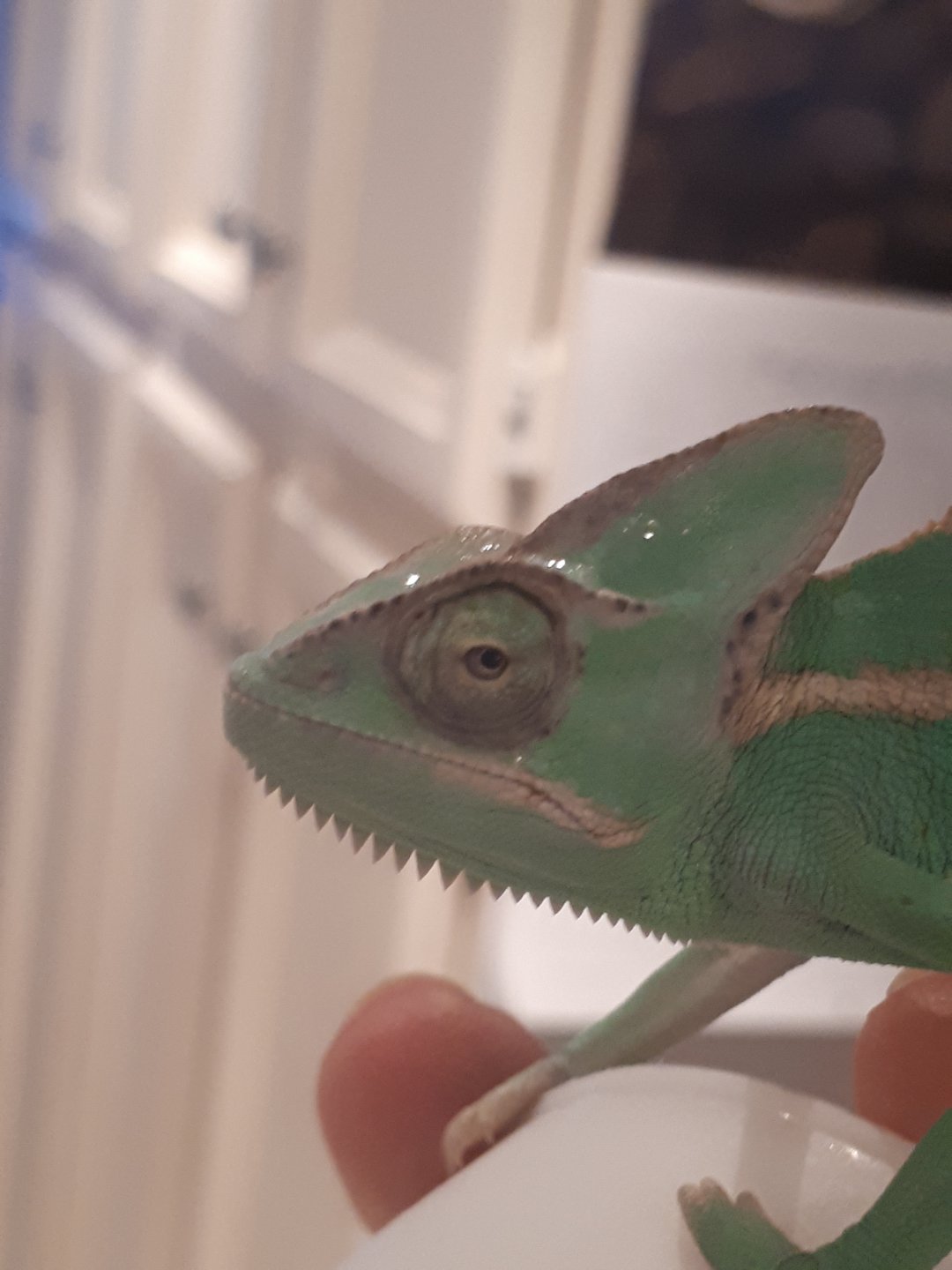 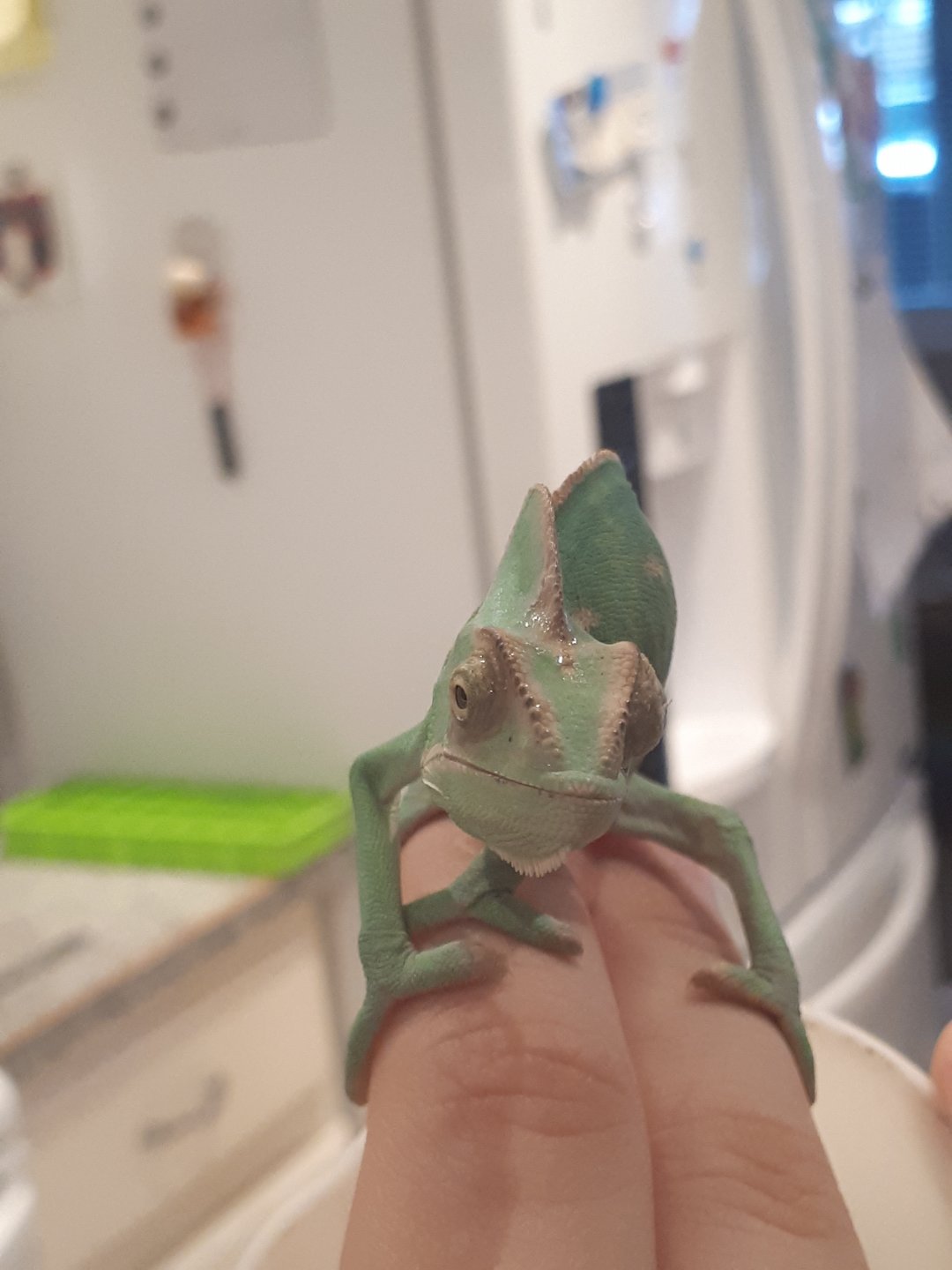 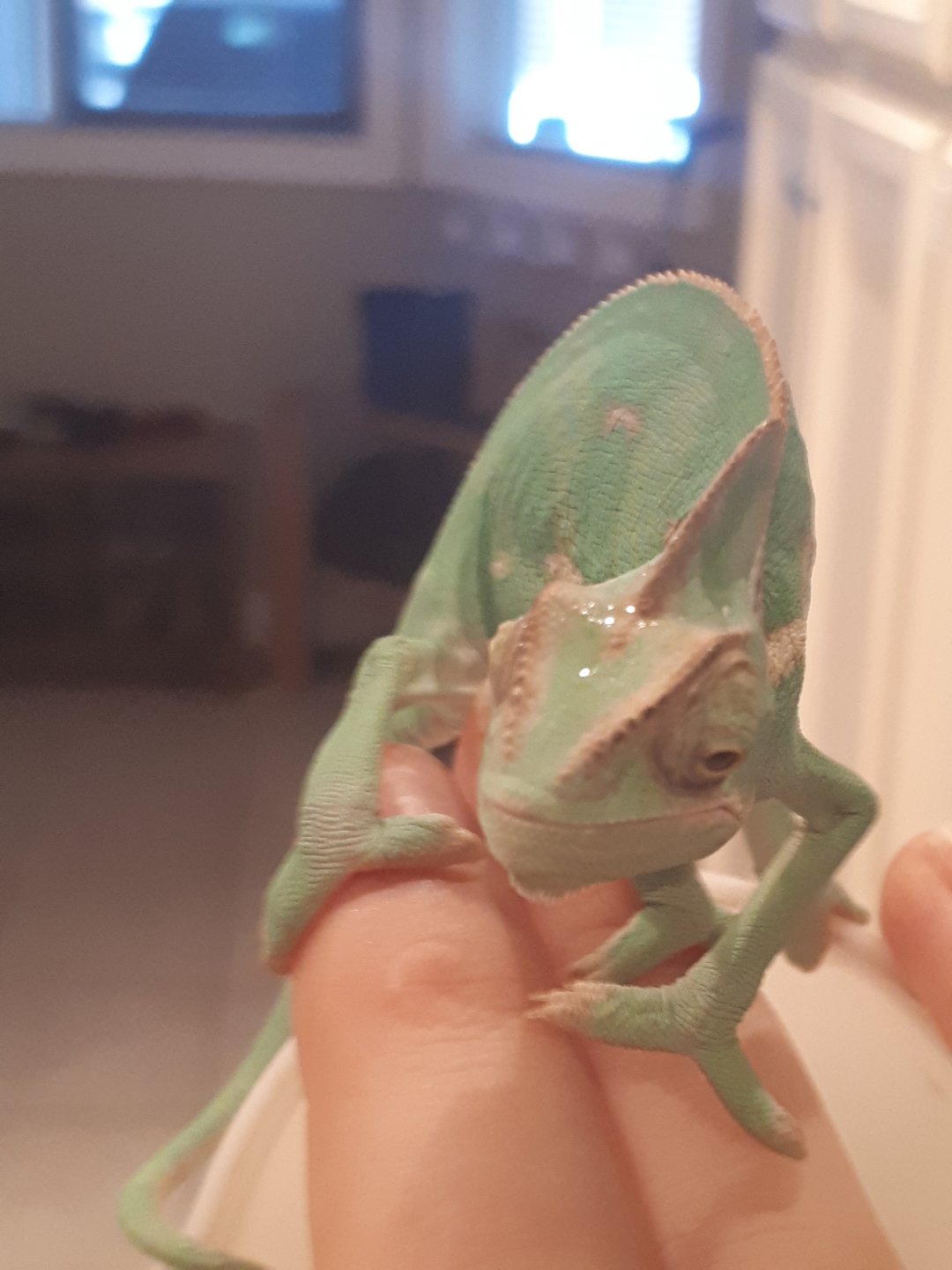 For his eye issue I would try a different approach. Maybe his body is not responding to the supplementation correctly. He may need to get a shot here and there of straight vitamin A. Or Vitamin A in gel form not complete capsule but by pocking a hole and squeezing out the correct dosage on a feeder for him to eat and intake the vitmain A. Just some thought for you. Vitamin A is difficult to discuss it seems that there isnt a real correct answer cause everyone has a different method on treating it.

freddyf385 said:
For his eye issue I would try a different approach. Maybe his body is not responding to the supplementation correctly. He may need to get a shot here and there of straight vitamin A. Or Vitamin A in gel form not complete capsule but by pocking a hole and squeezing out the correct dosage on a feeder for him to eat and intake the vitmain A. Just some thought for you. Vitamin A is difficult to discuss it seems that there isnt a real correct answer cause everyone has a different method on treating it.
Click to expand...

Thank you for taking time to reply! I discussed vitamin A in passing today with my vet, and will be dosing with oral vitamin A from a gel capsule. There's less of a chance of possibly OD-ing on vit A that way, though it may take some time see the effect. At least the eye drops seem to sooth the irritation! I'm pretty slammed at work, but I should be able to stop by at a health food store tomorrow. I'll do a bit of reading before figuring out a dose. It seems like a very imprecise science!

I am not sure if you have seen this thread yet? Hope it helps!

Matt Vanilla Gorilla said:
I am not sure if you have seen this thread yet? Hope it helps!

Oh that's awesome! Thanks Matt!! I'll have a read through tomorrow. I briefly stumbled upon that thread, but forgot to bookmark it! @Decadancin - would we be able to get that eye health thread stickied, perhaps? I think it'd do a lot of us newbies good!

@Matt Vanilla Gorilla great thread!!
You must log in or register to reply here.