Hello there! My name is Amanda, and I work as a specialty assistant at a mixed small animal/exotic veterinary clinic on the west coast of Canada. We had a juvenile male veiled chameleon surrendered to our clinic earlier this week, and I've offered to take him on. I have some experience with reptiles (and given my profession, the common husbandry pitfalls of many species), but I've never personally owned a chameleon and I have a lot to learn! 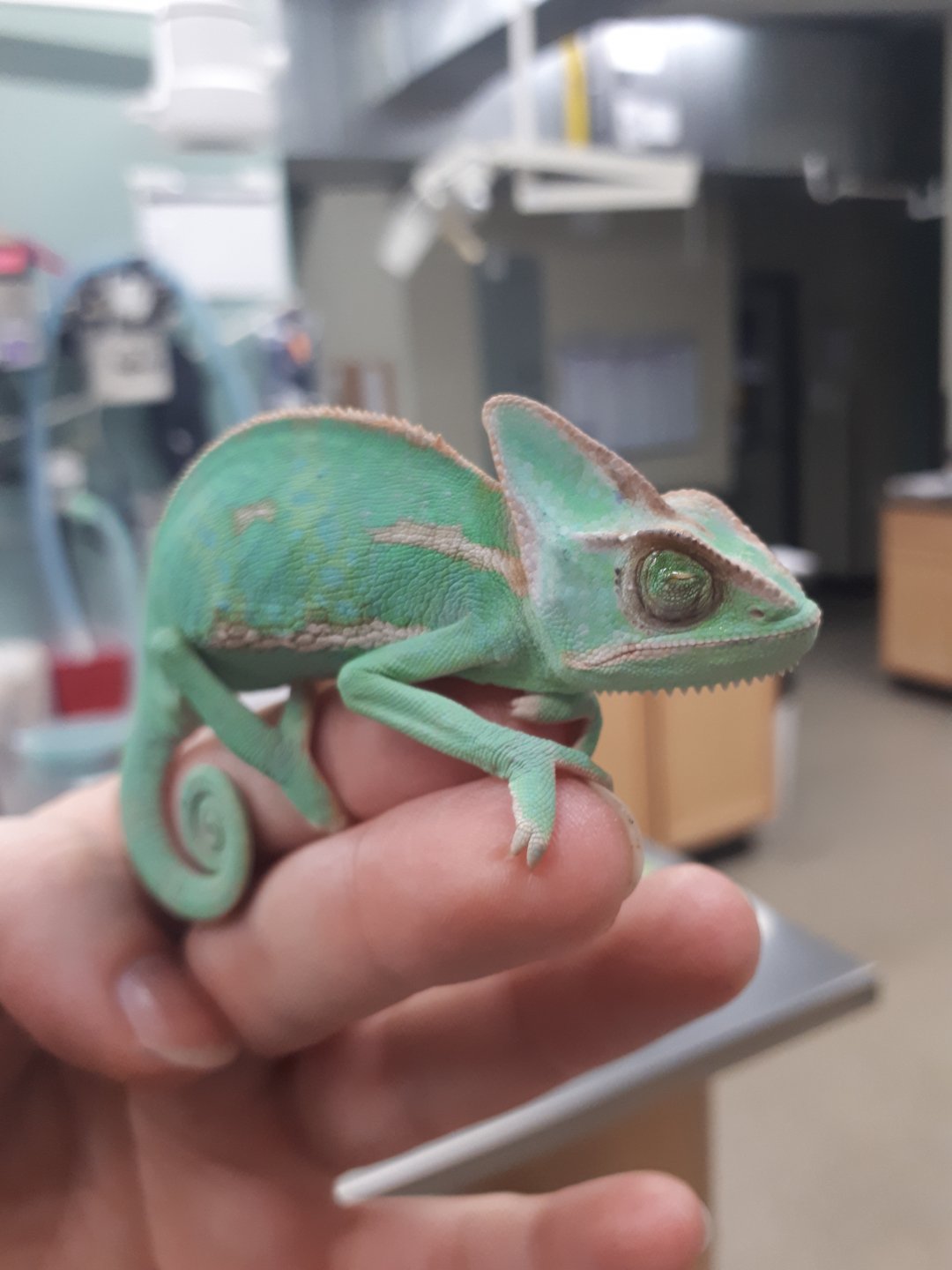 "Karma" is a chain pet store reject, having been sold and then returned some time later when he was in critical condition. The pet store brought him to us for an examination, and due to the time and expense of nursing him back to health they originally opted for euthanasia. Luckily for Karma the veterinarian on his case thought that he was strong enough that he could pull through with some TLC and proper husbandry, and coincidentally I was on shift. One thing led to another and since I'm a big old softie I'm bringing this little guy home! He'll require daily syringe feeding, eye drops, and soaks for the next little while, but even 48 hours in he's had drastic improvements in skin condition, color, and behaviour. This photo was taken at the 24 hour point. He's still having issues with opening his eyes, but he's a spunky little guy and I'm happy to give him a chance as long as he keeps fighting!

I'm sure I'll have lots of questions in the future, and lots of reading still to do. I'm very thankful for the resources on this forum, and all of the time and energy put into sharing this valuable information! I see clients every day who have been misled or have just downright failed to do any research whatsoever before bringing home exotic pets. I want to provide as good of a home as I can, and am dedicated to doing this right.

I look forward to interacting with you all!

hello to you and Karma, I'm glad to hear that karma has a fighting chance with such a caring person!!! me and I'm sure other members of the forum look forward to interacting with you too! best of luck with Karma

Awww I'm sure he's going to have a great life.

Im in Vancouver, you can message me with any questions or if youre trying to track down a variety of feeders for him!

Thank you! I live in Kelowna and one of the pet stores here can order in most feeders, but the more sources the merrier! I may just have to hit you up sometime. I'm always eager to talk about my new obsession!

Sounds like you were meant to take this guy home. He is a lucky one! Keep us updated.

I feel like the lucky one - expenses aside haha! I'm keeping track of his progress in this thread if you're interested in following our journey.

Hi, and welcome! I'm glad you found this forum, and commend you for taking in Karma

timw1 said:
Hi, and welcome! I'm glad you found this forum, and commend you for taking in Karma
Click to expand...

I'm also very glad to have been directed to this forum! It's been an invaluable resource so far, and I'm sure it'll continue to be for years to come. Everyone has been so welcoming - I love it!
You must log in or register to reply here.