his name wasn't Splat for nothing...a dedication to Splat and Laurie

It is with great sadness that I bring bad news of my dear Splat's passing today.

While at first I had no idea why he acted so ill, it was confirmed that his spine was broken once I came home from work and found him dead on his basking branch. It seems that the crazy fool must have fallen during one of his stunts and hurt his back. You have no idea how many times he made my heart stop just watching him swing like a monkey in or out of his cage. I don't even have enough fingers and toes to count all the times he has almost fallen...and even fell almost to his death. In fact on the second day I had him ( when he was just 6 weeks old) he fell while running after a housefly across some plant leaves. 6 inches (15.24 centimeters) he fell before his tail caught a branch and saved his life. His name wasn't Splat for nothing.

For some who don't know, I suffer from depression and because of Splat, my first chameleon, he has kept me focused and well in many of my darkest moments. He has brought me joy when all I could feel is sadness. He was never my pet, he was my room mate. He was the wind beneath my wings.

Splat grew up on the forum just like some of Tiff's chameleons did. It was because of all of Tiff's wonderful threads that I tried to post as many photos and videos as I could of Splat.

I don't always have the time like I used to post as much as I did because Splat was so vital in my mental health that I have been able to work at least part time for the first time in many years. He really was that important to my well being that I don't know what I'm going to do without him. He was everything to me.

I want to thank all of you for your kind words when his girlfriend passed away shortly ago. That hit me far harder then this but at least I am able to now cry after many hours of having no tears. I know that regardless of how friendly he was to me and all the strangers who can to see him, that he never loved me. At least not like my sweet Laurie who even knew that something was wrong when I came home from the hospital after slicing off part of my thumb with a knife. (Remember the funny video of Laurie shooting at my thumb, so she could kiss it and make it feel better? Lol)

as a result, this thread is for all the wonderful memorys that Laurie and Splat brought to me and this forum.
may God bless both of them and let them have hornworms when ever they want them.


first morning misting and I got him wet...he hated water 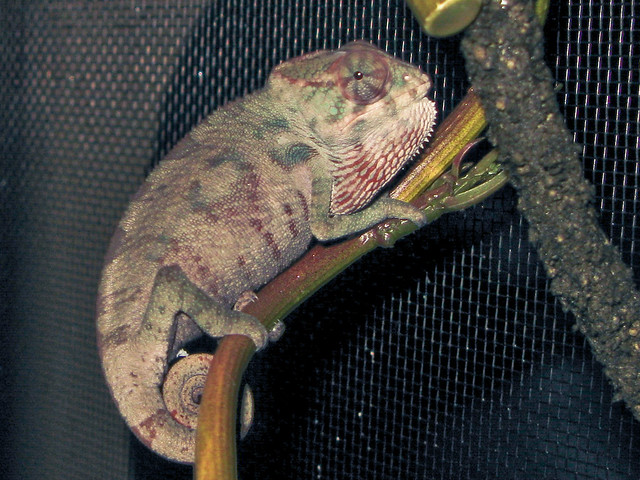 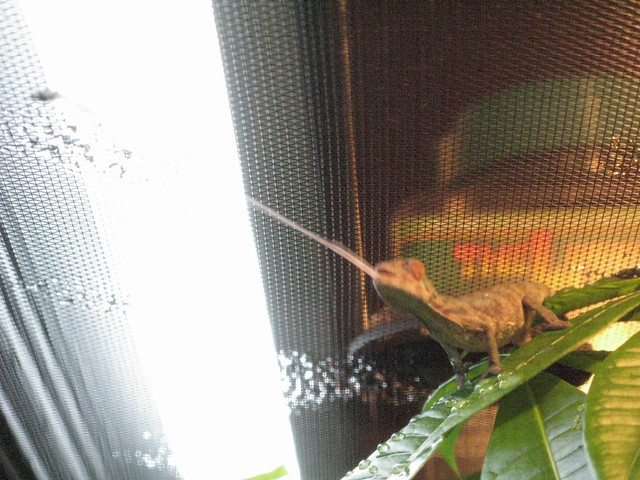 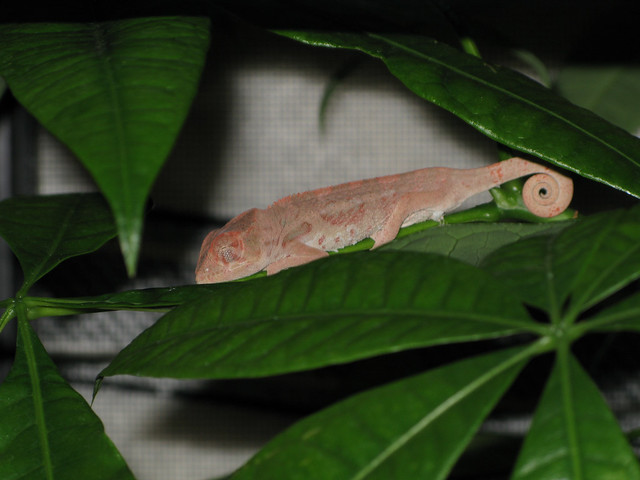 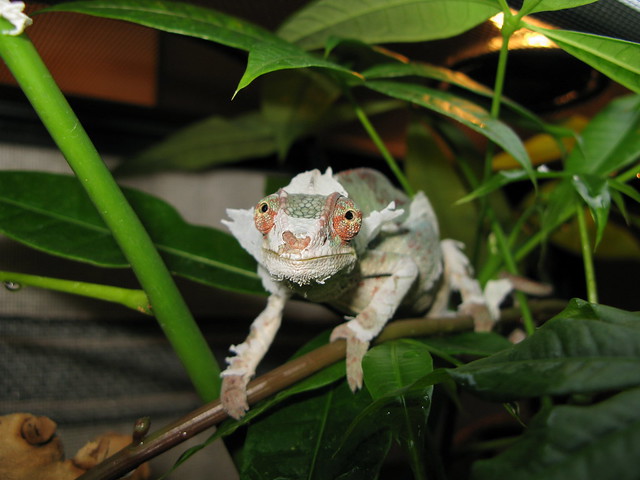 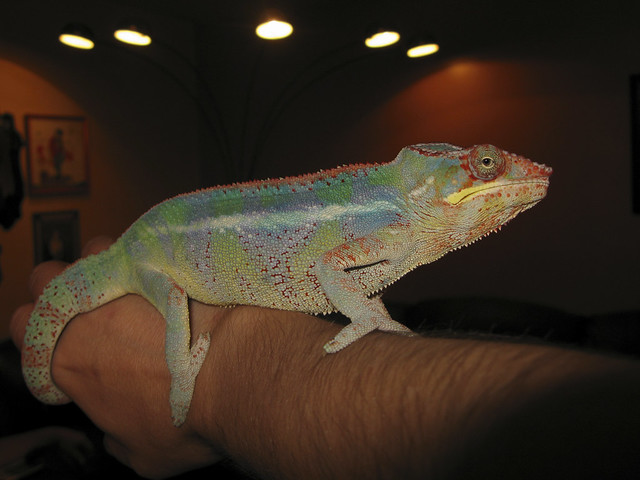 when I just got Laurie 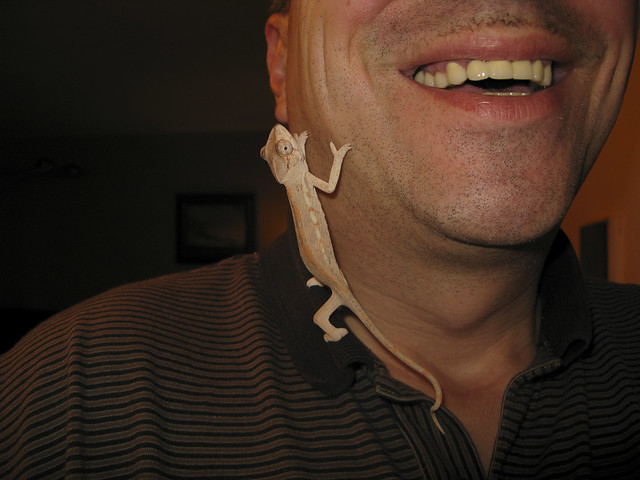 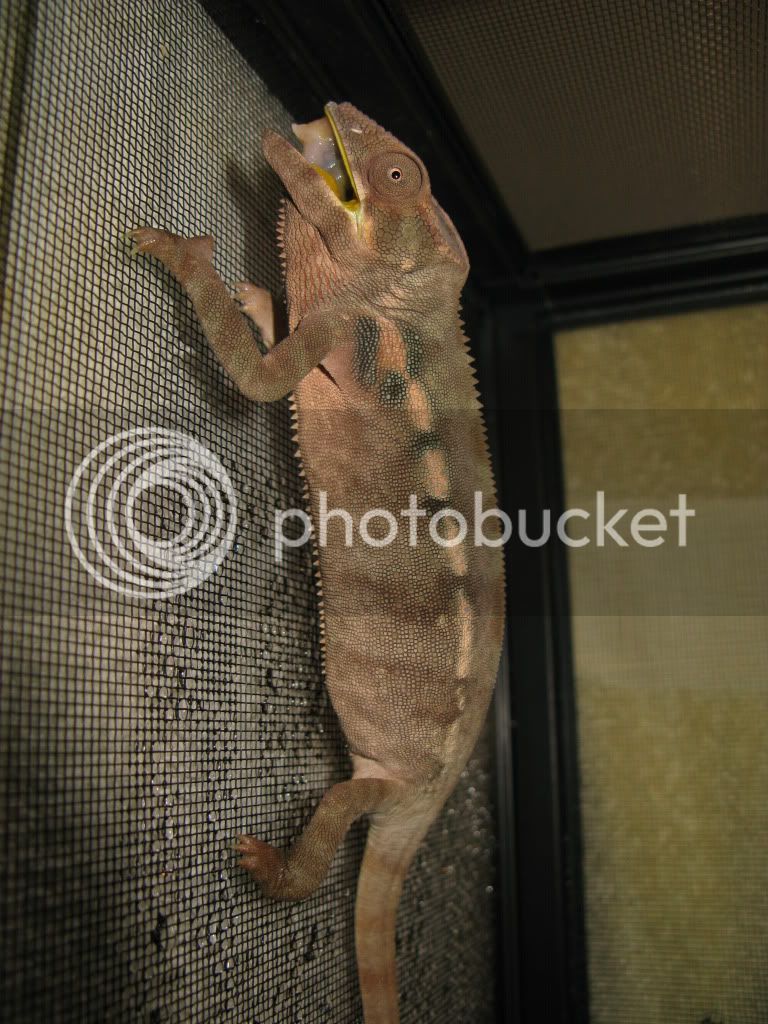 Laurie wanted out, but still shoots at water droplet 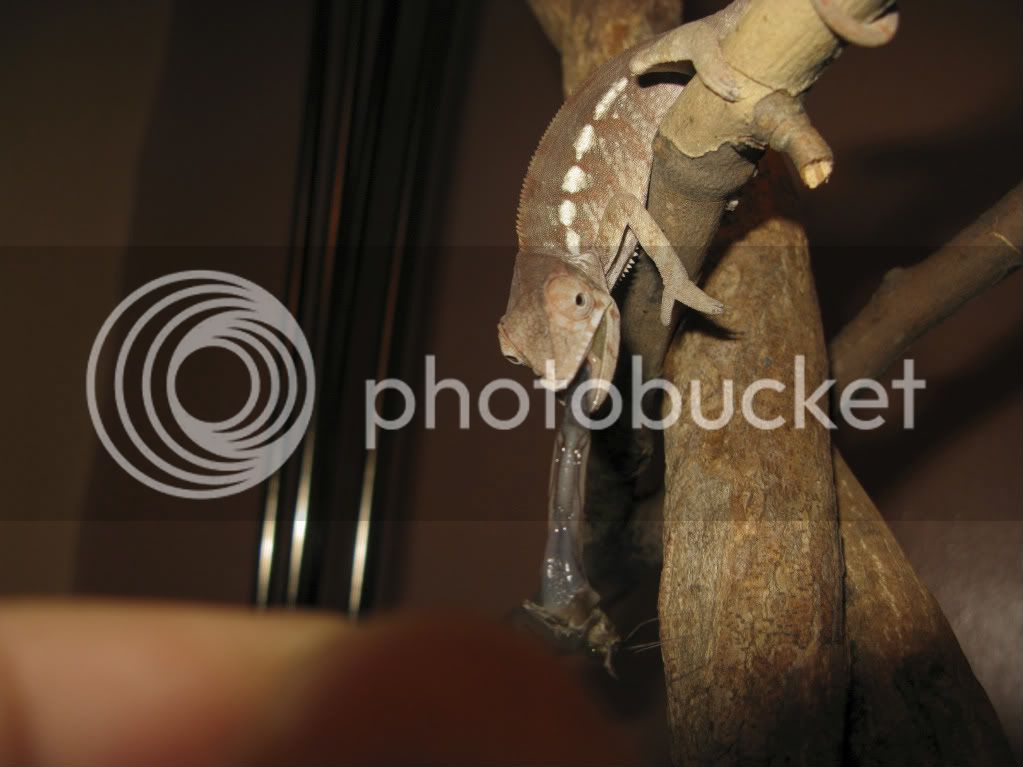 
Splat when he can hear the real Laurie on the speaker phone...true story 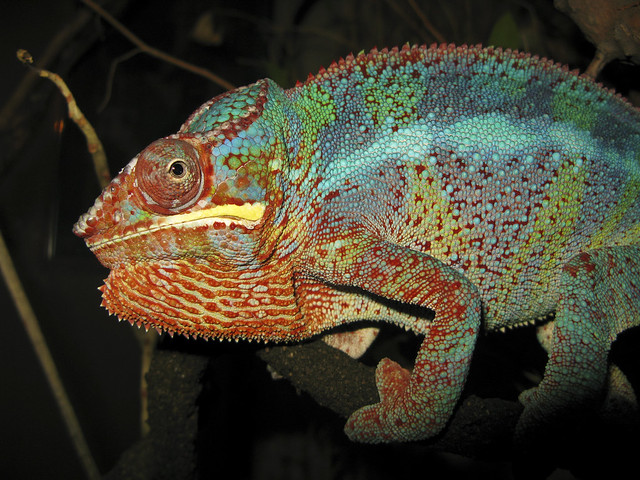 Laurie just before she laid her eggs 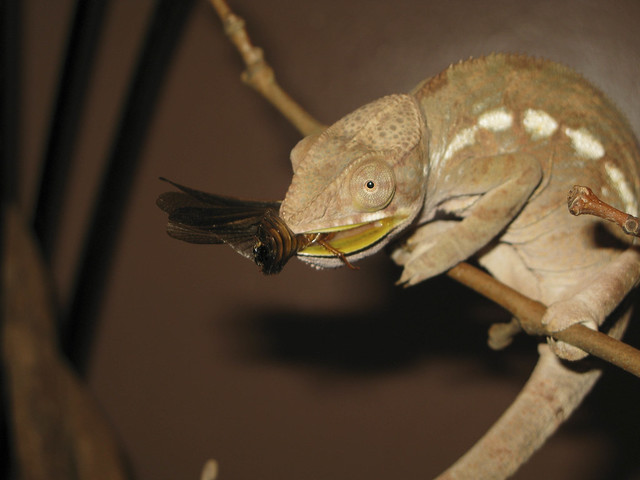 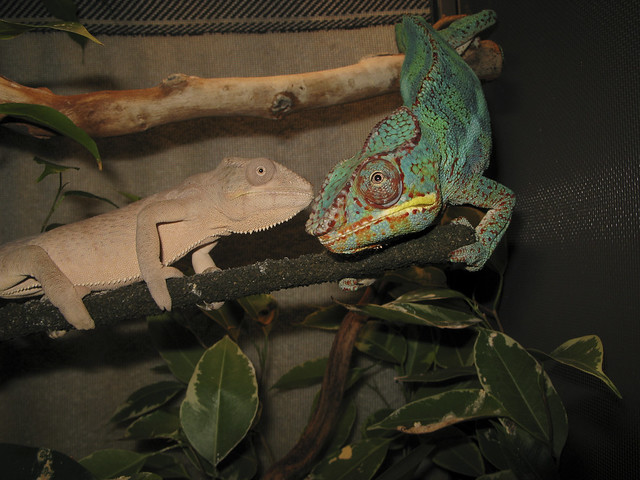 Harry, that is such a sad story but I am glad that Splat was able to bring you so much joy and happiness at the same time. Looks like he had an awesome life with you. So sorry for your loss and may he and Laurie both rest in peace together now.
view our sponsors

Harry, what a wonderful tribute to two very special chameleons. I am so sorry you lost the pair of them. It really hurts for a while, but it does get easier. I have really enjoyed your updates and watching them mature - they were forum babies just like my Amy! One day you will meet again at the Rainbow Bridge where they are already hunting as many bugs and flies as they can find. Thinking of you. Love and hugs, Tiff xx
C

Keep your head up Harry. i am so sorry to hear about your Splat & Laurie, stay strong brother and dont let the depression hit. keep the awsome times and all the experience in chameleon keeping Splat and Laurie gave to you. My girlfriend had a female pygmy die on her today, its really sad. something so small to so big can just grab your heart. my thoughts and condelences go to you Harry.

ChameleonsInMyHouse said:
Keep your head up Harry. i am so sorry to hear about your Splat, stay strong brother and dont let the depression hit. keep the awsome times and all the experience in chameleon keeping Splat gave to you. My girlfriend had a female pygmy die on her today, its really sad. something so small to so big can just grab your heart. my thoughts and condelences go to you Harry.
Click to expand...

the same to your girlfriend.

Very sorry to hear about this, even though i am new to the site.

I am truly sorry for your losses Harry. They were both beautiful. I'm glad you have their eggs and I hope they do well for you. Again, I'm so, so sorry.

Thats such a bummer. Sorry to hear about both of them. They were definitely very nice looking animals.

I'm glad that have been able to find joy in chameleons. It's not very easy crawl out of the dark. I'm very sorry that you lost these two chameleons. They are indeed like two peas, and I'm sure they are both equally thankful for your great care. While no chameleons can ever replace these two, at least you know that you have eggs from your two favorite chameleons. I'll send some extra stuff in your order. Can you PM me?

so sorry for your loss R.I.P Splat & Laurie

Oh, Harry, I'm very sorry to hear that. I'm glad you have the quads, and hope you'll be up to having another panther or two sooner or later. I still miss my sweet Thaxter who died last spring, but it's nice to have his successors, McGinty and Bea.

I don't even know what to say Harry, it is almost like losing one of mine. As I watched and heard both of them grow up I got very attached. You know I will miss them both. I hope we are both wrong and that the eggs are good. fingers crossed.

thanks everyone for the kind words.

they both were the best and I got my toes crossed about their eggs. they would make great babies if the eggs are good.

Harry, I'm so sorry about your loss. Suffering from depression myself, I know (at least in my case) that sometimes our pets are the only reason to get up in the morning, and the only reason to continue through some sh*tty times. Thank you for sharing.

lisa h said:
Harry, I'm so sorry about your loss. Suffering from depression myself, I know (at least in my case) that sometimes our pets are the only reason to get up in the morning, and the only reason to continue through some sh*tty times. Thank you for sharing.

yep, it's why it is just so sad. they were not my pets, they were my best friends.

warpdrive said:
yep, it's why it is just so sad. they were not my pets, they were my best friends.

Well pardon me but where do I fit in now? I thought I was your best friend. Are you like Paris Hilton shallow and fickle?

laurie said:
Well pardon me but where do I fit in now? I thought I was your best friend. Are you like Paris Hilton shallow and fickle?
Click to expand...

I know I am very new to this site and you don't know me but your story tugged on my heart your splat and laurie were beautiful and I know why I enjoy this site so much everyone on here is so great I could read posts all day everyone is so friendly, big hearted and helpful I. Will pray for your eggs!

even though we havent talked to eachother on the forums. i did see quite of few of your "splat and laurie" pics and how happy they were in each pic you posted. I can only say that i pray and hope for your eggs hatch and let you bring you up again. Take care Harry, i'm sure they couldn't be happier from the love and care you've given them. they were amazing chams, and for you they were amazing friends.