Goodbye Isis; I love you!

It has taken me a week to sit down and write this, as I've been pretty upset with the passing of my beloved little veiled girl, Isis.

We had been through alot together: She came home from the pet store at 11 weeks with pneumonia which lasted a good 6 months, but which we fought successfully with alot of coaxing of medicines, hand feeding and general cuddling to keep her warm and to let her know she was loved so very much! Soon after that was nipped in the bud, she laid her first clutch. It was hard on her - she was a fairly small girl but she was successful in laying 41 eggs. Not a moment's rest for Isis though because soon after laying she developed another RI. I knew she needed treatment, which she got but it was at that time I became concerned with the amount of Baytril she'd had in her short life. In October she started developing her second clutch of infertile eggs. She was HUGE and in the end despite supplementing her within an inch of her life, she still pulled calcium from her right foot which ended up causing a deformation. With no eggs in site my vet decided the best course of action was to surgically remove the eggs and then spay her so it wouldn't be a problem again. This was done on December 18th, and all through Christmas she recovered from surgery with so much courage. Her surgical incision never fused and in late March she pulled the scab off in her cage and opened up her incision. Off to the vet for a repair, an overnight stay and more Baytril. All the while this was going on, she had developed a blocked airway from tubes used during her surgery which caused her breathing difficulties. After x-rays and consults with my vet it was decided she would need a scope to figure out what was going on exactly and how to fix it. I knew the difficulties in breathing were causing stress on her heart and along with the long term Baytril use, was concerned that her health was seriously at risk. Despite discussing the risks with my vet about the scope, I knew she needed help so made an appointment for this past Tuesday to have this happen. Much to my dismay, last Saturday I noticed her left eye was dark and sunken and the tip of her nose was starting to discolor and darken - what I call 'the death watch'. I tried my damnest to keep her hydrated and warm and even tried feeding her but when she threw up her half digested lunch, I knew the prognosis wasn't good. I was hopeful but knew her chances of making it to her appointment on Tuesday was slim. Waking up on Sunday, I took one look at her and I knew I was losing her fast. I took her into my bedroom and cuddled her, telling her how much I cherished and loved her. It was a sad, sad day...I cried and sobbed my eyes out as she passed in my warm and loving hands within the hour.

I know in my heart that she is better off not having to fight illness or be forced yucky meds every day but I would have gladly persevered if it meant I would have had her longer in my life. Alas, it was not meant to be. Isis is now buried in my chameleon burial ground with my other lost chameleon babies, Karma and Cocobean. Isis will always be cherished and never, ever forgotten. I loved her SO much

Here is my little girl on some of her better days: 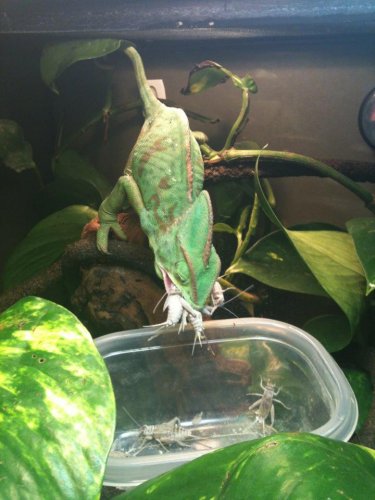 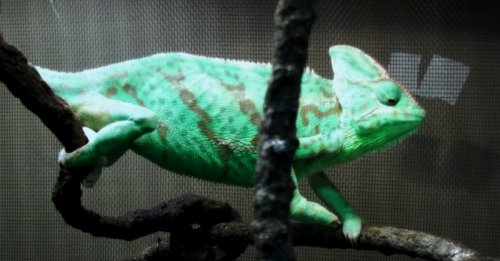 After laying her first clutch: 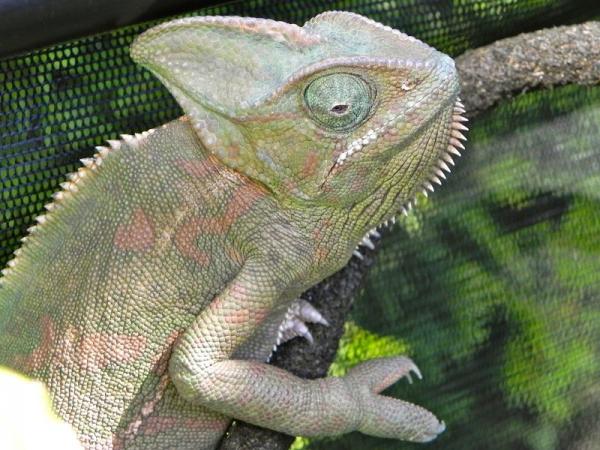 Lisa, I was so sadden to hear that you lost Isis. She was such a beautiful little lady. I fully understand the heartbreak you must be going through. My thoughts and prayers are with you.

sorry to hear of your loss, as i am prone to say...
we can be thankful she had you during her trying
and far too short journey here.

I'm so sorry for your loss. She was a pretty little lady and I chuckled at the pic of her shoving 3 crickets in her mouth at the same time! RIP Isis...
M

Aww, I am so sorry that you've had to let Isis go on ahead. You both fought a hard battle and tried your hardest. Now she is at rest and never again needs earthly meds. Be at peace, both of you.

So sorry for your loss. I know you truly loved your chameleon and did all you could for her.

Chameleonmom, know she was in the best hands while here on earth.

Lisa I am so sorry for your loss of Isis. She was a gorgeous girl in the best hands possible. I wish there is something I could say that could ease your pain but from experience there is really nothing. XXXX and she is with all the sweet babies at the rainbow bridge

Oh, my so sorry for you. She was a special girl and will be missed a lot.

Staff member
I am so sorry to read this. Isis was a true fighter! She was such a pretty girl who went through so much while she was here. Thanks for caring for her and sharing the experience with us. I hope your heart mends quickly and all your memories of Isis are happy ones!

RIP little girl... you will be missed!

I am so very sorry for your loss of Isis, such a beautiful little girl.....my thoughts and prayers are with you.

I was so sad when I heard about Isis I have a real soft spot for her, she was such a lovely girl and was lucky to have you as a mum. You really looked after her and did a great job even with all of her health complications.

I haven't been online for a few days and haven't had a chance to check this thread until now but I just wanted to thank everyone for their kind words about Isis. I know a great many of you offered advice and assistance when I was having problems on her second clutch and for that I am grateful!

Angie, I LOVE the poem you wrote and have copied it down and put it into her record book. Thank you so much, it really is lovely and brought tears to my eyes in remembrance. Thank you!

I'll add my condolences to the list.
It is so sad to lose a beloved pet.
I hope you will soon be able to smile as you remember her and know that she is finally at peace after her battles.

sorry for your loss,its always hard on us.

So very very sorry for your loss, RIP Isis
You must log in or register to reply here.

how do I know when she’s receptive again?