I’m currently at work so will fill in the full help form and post pictures when I get home, but I was wondering if anyone could help me with a few questions please. As I’m taking my cham to the vet tomorrow morning and want to be as informed as possible. Sorry for the essay!

So my lil guy hasn’t been eating or drinking very well over the past 2/3 weeks. He has never been a great eater, but has gone from having 4/5 bugs every other day plus calci worms, to one or two, sometimes more. He is still very active with a strong grip and has actually gained weight since his last month check. He also doesn’t have sunken eyes, but persistently off white to yellow urates I've been trying to fix.

Since I had changed his cage around, he’s shed and the weather has gotten a lot colder in this time I originally put it down to those changes. To be sure though, I recently sent a fecal sample away for the first time and they’ve just phoned me to say it has come back positive and he would need to be de-wormed and brought in for a check up.

1. The vet has dealt with lizards in the past but I don’t believe they’ve had experience with chameleons unfortunately. Could a test be false positive? My guy is a weirdo and will only poop outside of the cage and since I was on night shift, the sample I used was about 4 days inside him, for no better term. I also took it on Friday and it has only just been tested today. It was apparently a ‘basic’ test or float and so I don’t believe they know the specific parasite involved.

2. Clean up. I know it is hard to say without knowing the specific parasite, but I'm assuming I will have to completely gut and disinfect his cage? He has many live plants and wooden branches, get rid or scrub? The disinfectant I’ve been using Is F1, is there anything that could work better? Also bugs? Should I get rid of the feeders I have in case they have brought anything into the house?

3. Travel. The vet is only about 30mins away in the car, but are there any hints on how to keep it as stress free as possible? I have a cardboard box I am going to push a few fake fines and plants into for him and add plenty breathing holes. I can blast the heating in the car and bring a spray bottle. Should I also use a hot water bottle to try and keep temperatures up? Maybe a damp cloth to help humidity? He’s pretty tolerant of me now and will crawl onto my hand when he wants out of his cage, but he’ll still puff up and gape when he’s feeling grumpy and so definitely does not like humans/being held. I was really hoping I could go without this stress for the poor guy. Utterly gutted.

A false positive would be unlikely in a test that is based on viewing the parasite eggs under the microscope. If they found a type of egg ie. pinworms for instance the treatment would be the same regardless of pinworm species. The drug or dosage might vary depending on the reptile being treated.
Cage cleaning will be important to prevent reinfection. Porous items will be easier to replace than disinfect.
view our sponsors

Hey, thank you for the help.

I guess I will hopefully find out more information about what specifically they found tomorrow. So all wood I should bin? What about plants? If I replace the soil and scrub down the leaves & branches would that disinfect them enough? I use this https://www.vetnpetdirect.com.au/F10D regularly as a disinfectant, is it ok? Also would live food be a carrier? Should I start fresh with feeders?

Would pinworms/worms explain his recent lack of appetite/ thirst too? I stupidly didn’t get him tested when I first got him so don’t really know how long he has been infected. I figured that since he was acting normal and had fine looking poop he’d be ok. Kicking myself now as maybe the stress of me changing his cage around a few weeks ago made things worse. Sorry for the million questions, I’m just devastated he is ill.

Pinworms was just an example. A variety of parasites can cause those problems. I have had chams respond well to pinworm treatment and gain weight.
Here is link to some cleaning info https://www.chameleonforums.com/blogs/blog/jacksjills-blog.40624/

If you've been getting your feeders at pet store consider ordering them online they are likely to be cleaner that way.

Brill thank you. I will have a good look through all of those. He has a spare reptibreeze and some vines from his free range that will require less cleaning so I can pop him in there while I deep clean the other.
I've kind of being doing both. I order online from a large reptile shop in my country that has great variety and has good reviews . Then another website for silkworms. Due to shift work I need next day delivery so ebay and others doesn't work unfortunately. So get rid of the feeders I have just in case?

If it is pinworms that might be best other parasites are less likely to be from the feeders. Crickets could be a source. Pet stores have reptiles that can cary parasites if they put loose feeders back in the feeder bin then they get contaminated. Your silkworms should be fine.
This would be a good question to put on a list to ask your vet when you are there.

Guess I’ll see what they say tomorrow and hopefully they can be more specific about what’s positive in the sample so I know how to proceed. Not sure if I can kill the locusts and crickets I have mind as just the thought makes me feel guilty. I might end up with separate bug pets which will be grim lol.

I wouldn’t care, other than his reduced appetite he’s been just as active as ever and even gained a fair bit weight over the past month as he’s had plenty of time exploring his free range. I was honestly expecting his sample to come back negative. Oh well, hopefully he will be even better once he’s been treated, I just wish I’d tested him sooner.

Thanks again for all the help and information. I really appreciate it.

So turns out I need to find a different vet.

Unfortunately the one I went to gave me lots of misinformation, tried to hold the chameleon badly and even grabbed a hold of his tail. Then asked if my lil guy was definitely a male and despite me saying yes, referred to him as a she throughout the rest of the exam. I bit my tongue and let them take him away to administer the de-wormer with the use of something called a worming crop tube to get it into his stomach.

Stupidly I didn’t think to ask about what de-wormer they used and I’ve since found out it was Parafend, which I’ve only really found information on about deworming sheep. They did weigh him to check dosage but idk, feels excessive? I’ve emailed them to get the information I should have asked for at the time, but honestly I’m just super stressed that I’ve asked too late. I'm supposed to go back in two weeks to get it all done again and I dunno, I guess I'll see what they say/what he's like.

Apparently his test is positive for round worm and ‘maybe’ pin worm. Not in large quantities fortunately. The vet reckons I don’t need to bother cleaning much, as he only poops outside of his cage, or getting rid of my feeders but honestly today was so stressful, I just want a clean slate and plan on blitzing everything he’s ever touched and steam cleaning the remains.

If anyone has heard of Parafend good or bad, any information would help as I’m trying to keep an eye on him. I'm going to up his mistings and keep him as hydrated as possible to try and flush it out as quick as possible.. Fingers crossed I’m getting myself worked up over nothing!

I don't know that product specifically but it is a brand of Oxyfendazol.

wow bad experience, I would call in for different vets around the are and see if they have cham experience, but considering the vet grabbed his tail and cannot tell the difference between male and female I say find a new vet, I have never heard of the drug but it cant be good if its for sheep .

edit: the reason I say this is because sheep is a rather large animal compared to a chameleon and if the vet doses wrong, depending on the strength of the drug it could make your chameleon sick or overdose. not to worry you but you said they weighed him to check dosage right? shouldn't they know what dosage theyre giving FIRST instead of checking after??? maybe I'm reading wrong but this sounds like a bit of a problem. As long as they know the dosage isn't going to harm your cham then I would take their word for now and find a different vet. also would ask the vet about this mystery drug I'm hoping for the best and good luck!!!
Last edited: Dec 12, 2018

Looking into Oxfendazole it doesn’t seem to be highly toxic and the vet emailed me back with reassurances that Parafend has no side effects associated and used widely on a range of animals. I probably wrote it wrong in my rant but yeah, they did measure him to make sure that the dosage was correct before treating him too. All teeny tiny 94grams of him.

Today he is a bit more lethargic and has started nervously leaf walking again, but I attribute that more to the stress of going to the vets and me pulling apart his cage to clean it. It was stuffed with plants and vines that made it a pain to clean, so I’m going to remove some plants for now.

I’m still going to keep a close eye on him and have bought some fresh feeders while I decide what to do with the colonies I already have and might stick to just using bug burger and dry food for a while. The vet mentioned leafy greens being a possible source of the parasites as I’ve definitely not been as thorough as I should have been cleaning them.

It’s hard owning an uncommon animal that vets have little experience with. I know I can’t expect them to know everything given the amount of species they deal with and even with researching as much as I can, I certainly don’t consider myself knowledgeable enough to judge. I’m just easily panicked (as the rants above show lol) as I’ve had pets that I’ve taken to other practises who certainly tried their best, but ended up doing more harm than good. There just isn’t enough research out there.

This vet was recommended by a shop that sells exotics, but there is another shop I’m going to ask too. The only other one I know of is a very long drive away and given how stressful the 40mins was, I’m reluctant.

Thanks
If all goes well I'm hoping a vet at a nearer branch will be willing to administer the next dose in two weeks. If not, they've agreed to let me take a pre-filled syringe and do it myself. I hope it doesn't come to that though and fingers crossed this lil man will be eating like a pig before I know it. 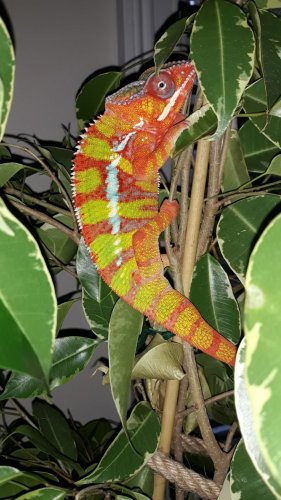