Quick couple q's for anyone who has the time for their two cents:

So recently I get my new chameleon hearing that you need to dust the crickets. So I buy some calcium/phosphorous and 2:1 and dust every cricket that goes down his throat for about 10 days. Then I read on hear that you shouldn't dust them that often. So I hold off, dusting every other time or so.

Then I hear that Phosphorous is a no-no.

Then I get home and find his eyes closed during the day.


First off - Sometimes it seems like he closes one eye, but keeps the one away from me open. I can see his closed eye still moving around in it's socket. So it's not like he's dozing or anything. i think....

And then I'm getting all paranoid because I wonder if I mist him enough (twice I day) 10am and 7pm. And then today i think i see an extra wrinkle in his side...ugh.

If anyone has time to comment feel free. Particulary on if I've given my cham death sentence with a calcium phosphorous suppliment for nearly 3 and half weeks.

Here is some recommended information to include when asking for help in the health clinic forum. By giving this info in your post, you will receive more accurate and beneficial responses. It might not be necessary to include all this info, but the more you do include the better. Please remember that even the most knowledgeable person can only guess at what your problem may be. Only an experienced reptile vet who can directly examen your animal can give a true diagnostic of your chameleon's health.

* Cage Type - What kind of cage are you using? What is the size?
* Lighting - What kind of lighting are you using? How long do you keep the lights on during the day?
* Temperature - What temperature range have you created? Basking spot temp? What is the temperature at night?
* Humidity - What are your humidity levels? How are you creating and maintaining these levels?
* Plants - Are you using live plants? If so, what kind?
* Location - Where is your cage located? Is it near any fans, air vents, or high traffic areas?

* Your Chameleon - The species, sex, and age of your chameleon.
* Feeding - What are you feeding your cham? What amount? What kind of schedule? How are you gut-loading your feeders?
* Supplements - What are you dusting your feeders with and what kind of schedule do you use?
* Watering - What kind of watering technique do you use? Do you see your chameleon drinking?
* Fecal Description - Briefly note colors and consistency from recent droppings.
* History - Any previous information about your cham that might be useful to others when trying to help you.
* Current Problem - The current problem that you are concerned about.


Pictures can really help as well.

royden said:
Particulary on if I've given my cham death sentence with a calcium phosphorous suppliment for nearly 3 and half weeks.
Click to expand...

I certainly wouldn't think you could give him a death sentence in only 3 weeks.
The reason they sell that 2:1 Ca powder is because it is typically recommended that 2:1 is a good ratio of calcium to phosphorus in a reptile's body to prevent MBD. But the problem is that crickets and most other insects are already high in phosphorus, so in order to get the ratio of the feeder insect to roughly 2:1, you actually only need to add pure calcium to the insect, and that's why calcium with phosphorus is not recommended.

What you also need to consider is that the vitamin D3 levels, as well as vitamin A levels also need to be kept in balance to prevent MBD.
Chameleons produce D3 naturally in their bodies if they are exposed to the correct levels of UV light, so if your cham is exposed to enough natural unfiltered sunlight you would not need vit. D3 supplements, but if your cham never gets unfiltered sunlight, you should occassionally also dust his food with a calcium that contains vit D3. But be aware that supplemented D3 can build up to toxic levels in their system if it is over-supplemented: you should still be using a pure calcium supplement without D3 at the majority of calcium dustings.
Vitamin A supplementation is a bit more complicated. Pre-formed vitamin A from supplements can also build up to toxic levels in their system, but chameleons may not be able to process beta carotene that they obtain from gutload into vitamin A. You should read this thread to learn more about it: Chameleons and Vitamin A


royden said:
And then I'm getting all paranoid because I wonder if I mist him enough (twice I day) 10am and 7pm.
Click to expand...

Misting twice a day is fine, provided the misting sessions are long (at least 15-20minutes) and provided you are seeing him drinking. If your misting sessions are not prompting a drinking response from the cham, then you are not misting him for long enough.
Also, having a dripper in place for the whole day is good way to ensure he has a source of water, and is possible also a more natural way of hydrating him.


royden said:
Then I get home and find his eyes closed during the day.
Click to expand...

Unfortunately, this could be caused by many things. Like PukaKeha mentioned above, you'll have to provide more information about your husbandry and your setup in order for anyone to try diagnose what is going on with your cham. Some photos of your setup would also be very helpful.
One of the common causes of closed eyes in young chams is stress. How thick is the foliage in his enclosure? Are there enough hiding spots for him in there?

Thanks Tygerr, I guess I don't know what drinking looks like. And I've heard a lot of owners say that they've never seen their cham drink.I see him lick his lips when I get him in the face. I saw him licking a leaf a week or so ago, but for the most part, he takes my misting as a sign to head for cover (which makes it hard to spray right on him).

Thanks for the phosphorous comments.

Thanks again to everyone who takes the time to comment. It means a lot to me to get advice here, I try not to ask questions about things I can find by searching the forums.

royden said:
for the most part, he takes my misting as a sign to head for cover (which makes it hard to spray right on him).
Click to expand...

Most chams seem to head for cover when you start misting them. I guess that response is what they would do during rainfall too, or perhaps they do it because misting is not the way they are exposed to water in the wild (it would usually be in the form of rain, which would probably be filtered down to large drops off the leaves in the dense tree canopy, like a dripper, or it would be in the form of condensation in the early mornings which would be practically impossible to simulate in an enclosure).

But what I've found is that if you keep the misting stream going constantly in one direction they eventually will come out again and even walk through the misting stream. It takes quite a few misting sessions for them to get used to it. A misting system also helps because I think are also a bit threatened by having a person standing there misting them - with an automated system and no people around I think they are less intimidated.
My chams generally get startled when the water spray first starts, and they scramble for cover, but within a few minutes they will come out and head for their basking spot again. And if the basking spot just happens to be directly in the path of the water spray, they don't seem to mind sitting in the spray, and will actually get quite soaked.


royden said:
I guess I don't know what drinking looks like. And I've heard a lot of owners say that they've never seen their cham drink.I see him lick his lips when I get him in the face. I saw him licking a leaf a week or so ago
Click to expand...

All those things you mentioned: licking leaves, licking lips are in fact the way that chameleons drink. Veileds in particular seem to enjoy letting water droplets collect on their face and casque, and then licking off those drops as they roll down over their lips. Most chameleons will lick off water that has collected on leaves. Some chameleons even walk right up to sprayer/dripper nozzles and lick drops off of them.
What you need to watch for in your misting sessions is that licking response. Make sure they are doing that, or else mist them for longer.

Keep your routines regular, and the cham will eventually get used to the routine and settle into it.

Here's my Panther getting one of his twice a day 20 minute warm water misty/drippy/rainy sessions. When he wants it, he comes on over. When he doesn't, he stays out of the way. 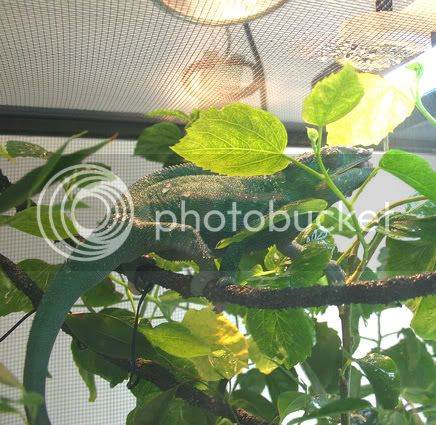 I can't thank you guys enough. Thankyou everyone!

I have been using warm water.

SInce I spray the whole cage to get it all wet, whether he's hiding or not, I eventually spray him down.Today I noticed him licking his lips more as I continued.

Today I started a drip system (cup with hole) and he seemed very intrigued, I think he mistook the rolling drops and leaf bobing for crickets.

Today I came home to him with one eye closed again, but bright green. So ..not sleeping but maybe dozing.

Thanks again! more opinions welcome
You must log in or register to reply here.

Veild female not eating or drinking, has developed a black spot on her side.
2