I finally got him out of his cage... But ever since his shed he has been so crabby with full colors any suggestions. 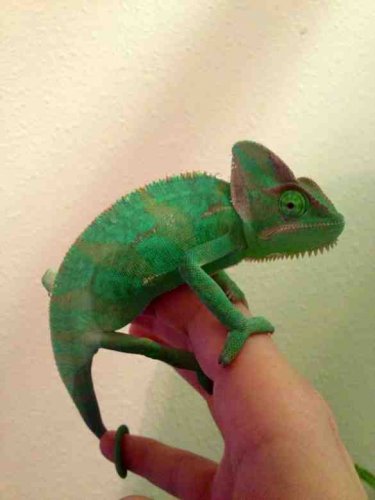 Sheds are a finicky time. Is he normally like that ?

How have you been approaching him, and how did you pick him up?

With patience and proper handling he will come to tolerate you

SaintJimmy said:
How have you been approaching him, and how did you pick him up?

With patience and proper handling he will come to tolerate you
Click to expand...

I normally wait a little bit to see if he try's and comes to me he hasn't wanted to do that yet. So I go from underneath him and slowly scoop him.

Normal colors: ever since he has had his shed he has had darker dull colors the picture I posted is actually the brightest I have seen him since the shed.

Curtis James said:
I normally wait a little bit to see if he try's and comes to me he hasn't wanted to do that yet. So I go from underneath him and slowly scoop him.

Normal colors: ever since he has had his shed he has had darker dull colors the picture I posted is actually the brightest I have seen him since the shed.
Click to expand...

In the picture he is probably bright from being nervous being held for (the first time?).

When I hold my veiled sometimes he gets black polka dots, or just turns lighter colors.

You are handling him the right way. If he acts scared, hold him above your head.

He will come to his senses

It's not the first time I have held him... Yeah normally when he gets a little mad he gets spots. I'm hit trying to patient with him. I hope he will come around and enjoy my company.

And I did just notice I put full at the top I meant DULL!!

Well I haven't had him to long. I got him on 04/2713 and he was all fine dandy would eat out of my hand and we were so close to where he would come to my hand. And then his first shed when he was with me happened on 05/14/13. Ever since he has gotten all the skin off he has been crabby, dark colors, not wanting to eat out of my hand any more. (But on side note: he was so close of eating out of today. But wouldn't. And before he would even eat out of my friends hands) that is the first time I have seen him almost some what green as well.
F

I have been doing very much the same handling-wise with Yuki since I got her. Today was the first day she's ever willingly climbed onto my hand without huffing and puffing.

Since we got her in February (Or the end of January, I forgot which), I take her out on a daily basis and set her on a large ficus tree we have in the house. Sometimes I would do it 2-3 times a day, usually on the weekend. I would then treat her to some living prey on the tree, which she would hunt. (Crickets, worms, whatever sticks!) At first she was a beast, always hissing, trying to bite, the works really. When she was extra angry, I'd put her over my head and carry her over to the tree, same as always. She'd scramble down onto that tree quicker than I could blink!

I'll have to see how she is tomorrow, or later today. Just reward your cham each time you take him out so he learns that you holding him has its advantages He'll come around, you just have to be patient. Some take longer than others, some are just used to handling from their birth.

As for him not eating out of your hand anymore, keep trying. He'll come around again. Yuki is great with that now, she'll even snap things that aren't moving from my hands now! (Apple slices and what not, she loves them, now that she's tried them! Used to puff up and sway, smacking her head against them before...) Try holding prey at their outermost parts to give him as much surface area as possible. (Holding crickets by the leg, for example) If he doesn't eat it and turns away, gently put it on his branch, always holding the leg/whatever you were holding. If he STILL doesn't want it, let it go and slowly move your hand away. That's what I did with Yuki, and it seemed to work for me.

::EDIT::
I should also note that the first couple of weeks, she'd have no problems coming out, eating from my hand, etc. But then one day, she just stopped, puffed up, hissed and tried to bite me. She wasn't even shedding. I thought that she suddenly decided to hate me, and she'd never go back to how she was. Slowly and surely she's going back though, and I hope yours will too! (Although I hope that he changes faster than she did for me.)
You must log in or register to reply here.

when did your chameleon get their colors?

What do these colors mean

Looks like he is ready to shed for over a month!