Mine are not too original lol.
My male brady is "Little Man"
My female is "Mom" .

Just what stuck as he is much smaller than her

My male ambanja is named Sintel. Based off an animated film by Blender Foundation about a lady and her pet dragon, Scales.

I named him that because his markings and the way he moves his eyes reminds me of the makeup style and exaggerated eye movements used in Japanese Kabuki theater.

Riley
Female Veiled
My mom actually named her - said she looked like a Riley to her.

I have two veiled chameleons, both males, named Charlie The Lizard and Mowgli. My daughter picked the name Charlie's name.

My veiled is named Picasso.
Y

What is in a name

My names are
Veiled Cham--Yowzer--from the paint commercial
Veiled Cham- Digit--The size of my finger when I got him
Panther Cham--- Copperhead--she is a couple months old and the color of a copper head snake
Panther Cham--Big Bro--her brother and huge
Panther- No name yet...he has to earn it
I let my husband pick the names...helps him bond. LOL

My boys name is Trippy! pretty close to your Tricky. haha

I named him because of the awesome trippy color combos related with ambilobes. plus it sounds cute

@JosieJobo I know, I'm a genius. I hope it continues for a long time, and if not I may just start another one in several months in case anyone missed it or there's new members haha!

kevbek said:
My boys name is Trippy! pretty close to your Tricky. haha

I named him because of the awesome trippy color combos related with ambilobes. plus it sounds cute
Click to expand...

Woah no way! That's awesome haha! I raise some mantises, and I have a little brown one, still an infant. He eats so fast. His name is actually, Trippy too! XD I named him that because he just trips me out more than my other mantises. Reason being…he's the only brown one. Eats super quickly. He does literally trip ALOT and interestingly, is my only mantis who actually leaf walks! He leaf walks just like, Tricky does, and even wobbles side to side (although that is more common in mantids) like a leaf in the wind. Just like, Tricky.

Trippy was just the perfect name for him haha that's cool we have that in common.

My veiled chameleon is named Gilligan, I was sitting at lunch with my parents throwing out names when my grandfather called talking about an old tv show he was watching, which made me think of Gilligan island, which i loved as a kid and always thought Gilligan was hilarious and funny and thought it would be a great name for my little guy since it is so much fun watching him eat and climb around his enclosure =D
B

When my son first walked into the door with a female veiled chameleon, she was a rather turquoise color - and though she only kept that shade until her first shed with me, along with her Arabian heritage, it was enough to earn her the name "Princess Jasmine". (About three days after this pic, Jasmine laid a clutch of infertile eggs - and instantly looked more like a dirty stick than a festival balloon!) Of course, when I picked up a male to go with her, he became "Aladdin" - though sometimes, he's more of a cranky "Ja'far" . . .

A few weeks ago, my son once again walked in with a female veiled chameleon. Though she's older than Jasmine, she's smaller - squat, almost, with the depressed casque and bowed legs that are trademarks of MBD. Though not the most attractive cham, she's got a story to tell, and in keeping with the theme, she became "Scheherazade".

Most recently, two new long-tongued lads have arrived, who have no names yet - when they do, perhaps they'll have something to do with the depths of a midnight-blue sky, or the azure sea . . . (~_^) 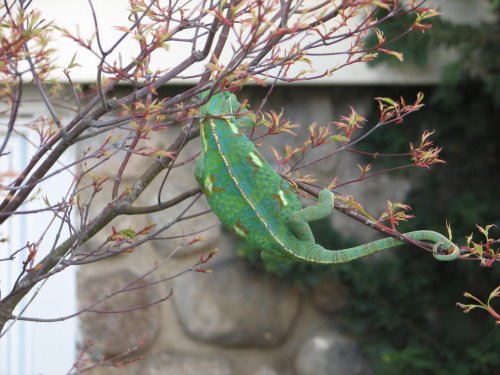 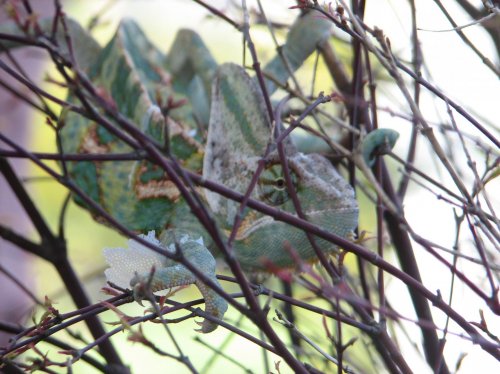 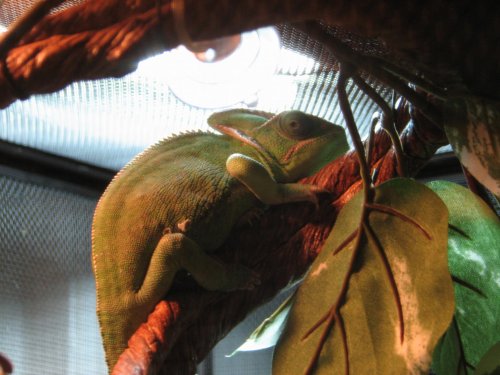 And the babies that are unnamed lol

You can see my past chameleons names in my signature.

I have two Jackson's one male one female my wife named them Bonnie & Clyde because we thought they fit the bill of rebels.

I currently have a Veiled male named James and a Panther female named Lily.

My first male was a NosyBe and I named him Clarence. It seemed to fit and everyone liked it. Then I got him a girlfriend. She was/is super mean So I named her Cleo, after Cleopatra.

Since then Clarence unfortunately passed away. So I got a new Male, he is a Diego Suarez, and I named him Poppa Doc.

In the movie 8Mile, there was a rapper named Poppa Doc whos real name is Clarence. Thats how I came up with Poppa Doc.
You must log in or register to reply here.