Can someone help me with filling out my enclosure

I just upgraded my enclosure to the reptibreeze led deluxe and it seems to not be covered enough and I think my chameleon is getting stressed out. I still have a few more branchs to put in but it's difficult to find a way to get them in, also I have some more pothos to put in. Also we're a out to build a stand with a drainage system, If anyone has some suggestions that would be awesome because I don't want mold or leaking or anything. I'll post a picture of my enclosure aswell.

What gender is your Cham? I think it depends if you need a lay bin then you’d need more branches towards the bottom

I would add a benjamin ficus with stronger branches on the bottom. I know nothing about the drainage system.. sorry

Your setup is great! Personally, I wouldn’t add plastic plants w/ veileds especially since they tend to eat leaves. Might want to replace that with another pothos or a hanging fern. Id add a nice full pothos with longer vines already if you can find one at Lowe’s or Home Depot or whenever you get your plants and replace the fake plant w/ it. Then just add some more branches toward the bottom like The Wild one mentioned and you’re golden.

The easiest way to hang branches and even plants is with Dragon Ledges. https://dragonstrand.com/dragon-ledges/ The amount of weight they support is amazing. Some have created their own version using metal strips. Other ways to hand branches and vines is attaching garden trellis to the sides or making your own little scaffolding. Just make sure that whatever you use is attached to the frame and not the screen.
2

The Wild One said:
What gender is your Cham? I think it depends if you need a lay bin then you’d need more branches towards the bottom
Click to expand...

She's a female so I'm going to be adding more branches towards the bottom as well as in the middle. I've heard star jasmine is a good plant to use is this true? I'm going to also get a Benjamin ficus but I want to have something to vine in the back so she's not always climbing the mesh. Thanks for all the help.

Regarding supports for dowels & branches, here are a few easy and inexpensive ideas:
The hanging pot plant looks good, but doesn't provide much for a chameleon to conceal itself or climb on.
I would also get rid of that hanging straw mat in the back right (potential claw hazard) and any/all artificial plants.

Until the umbrella plant grows some more, you might raise it up on top of an inverted pot of the same style & size.

Dracaena Marginata is a good plant for high up coverage. It’s stems are usually pretty sturdy for chameleons to climb up in. Mine likes it so well he sleeps in it. I would get a good size one and place it in the back far left. It could replace the fake plants there and provide a lot of foliage/hiding spots for your Cham. 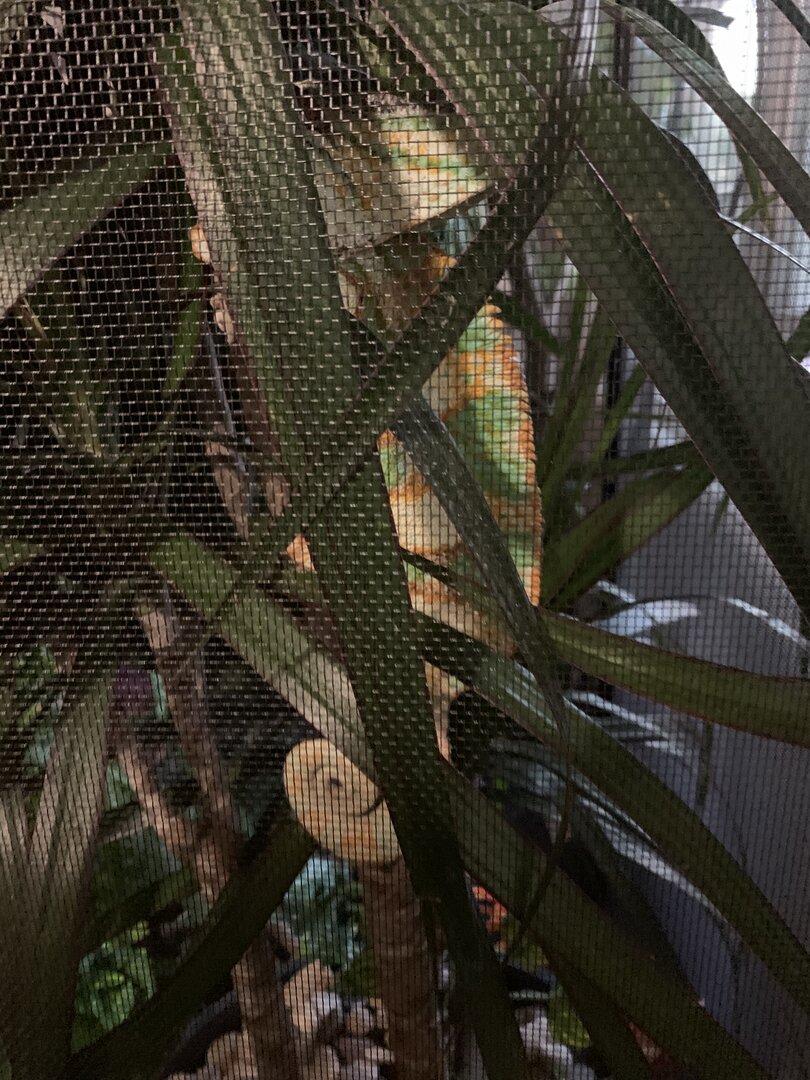 Heres a pic of my Cham in it. 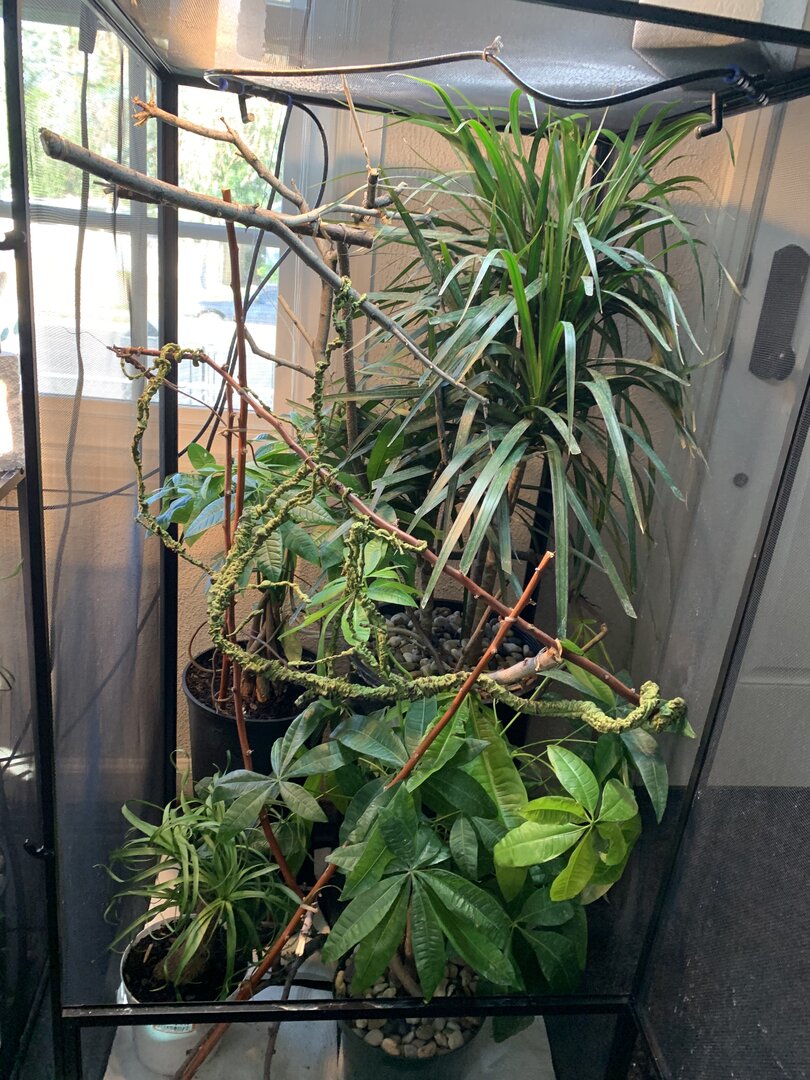 Here’s what it looks like in my cage. It’s the top right one. The other plants are money trees and a ponytail palm.

Do you have a lay bin set up for her?
L

As for a drainage system, what I did was get a big tray, can’t remember where I got it but basically it’s a tray like you’d put under a washing machine to contain any leaks. Then I got some round flat pvc things at Lowe’s, don’t know what they’re for but they work. Then got an old table at goodwill. I drilled several small holes in the bottom of my reptibreeze, then drilled a line of 4-5 holes in the front end of the tray. I put the tray on top of the small table with the front edge where the holes were drilled a little over the edge of the table, put the four round pvc pieces in the 4 corners of the tray, then put the reptibreeze on top of the 4 pvc pieces. I then placed a bucket under the front edge of the tray to catch the water that will drain from the holes. That’s it, a drainage system. It works really well.
You must log in or register to reply here.

2
Can someone review my enclosure?
2

Veiled Chameleon hanging out at the bottom of his enclosure

Hemipene out while on my hand!?